Use Pheromones to attract the opposite sex!

The biggest draw of A Pirate’s Life, the new expansion content for Sea of Thieves, might be Captain Jack Sparrow and the many other Pirates of the Caribbean characters now a part of the live game’s world. But while it’s nice to delve into the crossover content to see nods to both Disney’s films and its theme park attractions, the story and Easter eggs aren’t the reason you should check out A Pirate’s Life. What the new expansion really excels at is giving new pirates and lone scallawags a new, low-stakes way to engage with Sea of Thieves without the threat of getting riddled with enemy cannonballs and losing hours of progress.

A Pirate’s Life launched as a free expansion to Sea of Thieves this week, and while it makes a few changes to the game at large, it mostly consists of five new “Tall Tales” that specifically concern Pirates of the Caribbean mainstays Jack Sparrow, Davy Jones, Captain Barbosa, and others. These stories take you on a journey to uncover what’s brought Captain Jack to the Sea of Thieves, sending you to some new locations that haven’t been part of the game before.

These aren’t the only Tall Tales in the game–there are quite a few others that take you on lengthy voyages all over Sea of Thieves–but the story chapters in A Pirate’s Life (or at least the first three, as that’s all I’ve completed so far) are a bit of a different speed than the rest of the game. They represent a pretty solid on-ramp into Rare’s excellent swashbuckling adventure game if you’ve never played it. They’re also fun to take on alone, filling a gap in Sea of Thieves content that’s been there throughout the game’s life.

For new players, A Pirate’s Life is a nice way to get started in Sea of Thieves. You can jump into the new content as soon as you’ve completed the tutorial mission, Maiden Voyage. After a quick story introduction, you’re able to sail your ship straight into a portal that takes you to the Sea of the Damned, a new location for A Pirate’s Life. Once you’re through the portal, you’re alone in the new area (unless you brought a crew, that is), free to explore its story, solve its puzzles, and uncover its secrets.

The Tall Tales of A Pirate’s Life feel like more traditional, linear video game levels than most of the rest of Sea of Thieves, and that’s handy if you’re learning the ropes. The content has you figuring out how to make your way through the Sea of the Damned’s locations, but it won’t really test you. Die in combat or fall too far as you’re climbing a wrecked ship, and you’ll respawn shortly to give it another go.

That gives you a chance to get the feel for Sea of Thieves while also giving you something interesting to explore without the risk of running afoul of other players. Pirates marauding the waves are the central draw of Sea of Thieves, but also its greatest annoyance–because even if you’re just starting out, you’re always at risk of getting run down, cannoned, boarded, and slain by other cutthroats. It can make getting used to the game harrowing. Since you’re alone in the story of A Pirate’s Life, however, you have a chance to get used to the game before going up against other players. 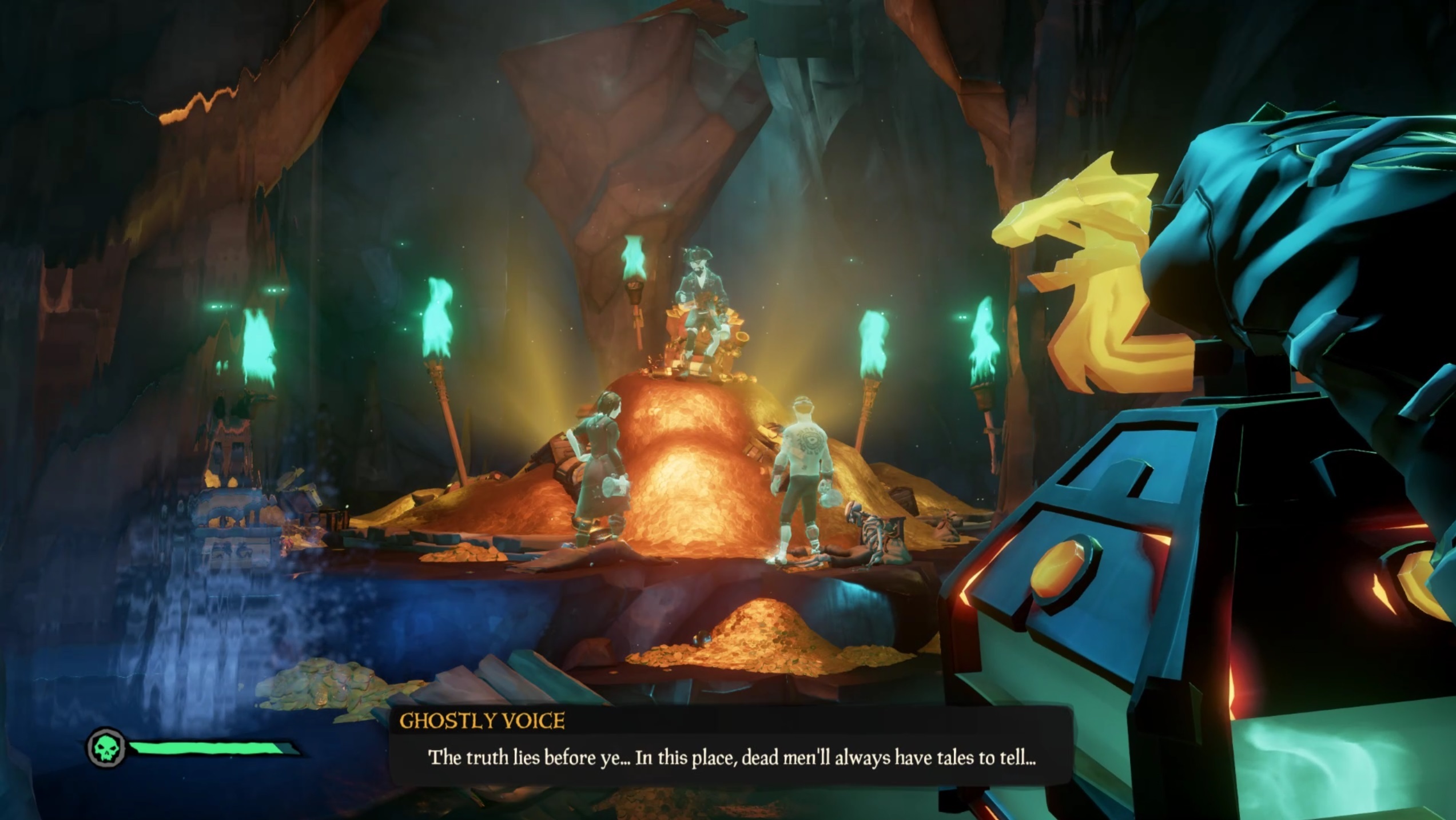 That’s also what makes the new content a great addition for solo pirates. You can play Sea of Thieves alone normally, but it is a fraught life on the high seas. Sailing a sloop on your own is exhilarating, and Rare’s sandbox leads to some great things when you’re alone. You’ve got to constantly scan the horizon for other, stronger ships that might decide you’re a plump target, and if you spot someone, Sea of Thieves quickly becomes a stealth game to avoid detection–or a horror game if your hold is full of treasure and you need to run.

The fact that Sea of Thieves can support so many different experiences is great, but playing it alone is also often frustrating. Spot a galleon while you’re hauling treasure or trying to advance your various in-game rankings, and you can lose a lot of progress. Getting chased around islands can suck up hours as well. With a crew of friends, this unpredictability is the draw of Sea of Thieves, but alone, it can get frustrating to constantly be disadvantaged as a buccaneer. Have enough sloops sunk beneath you, and you might decide the pirate’s life isn’t for you, after all.

So these new Tall Tales help fill a void in Sea of Thieves by making it a little more viable to play on your own. There’s a little bit of high-seas travel involved, but for the most part, you’re off in your own little world as you uncover these stories. Though they include combat with various enemies and creatures, including bosses, they’re not so difficult that you can’t handle them alone. Rare has also worked to make resources plentiful whenever you’re challenged, so it’s hard to get wrecked in a solo fight. Even if you do, though, you can just respawn straight back into the fray and try your luck again.

It’s nice to have content in Sea of Thieves that doesn’t require coordinating with a bunch of friends and clearing a block of time to play, and really, Rare should think about this sort of design more often. Sea of Thieves is a great game, with a lot of compelling ideas and mechanics–but it’s particularly great with other people, and a lot less so when you’re alone. Stuff like A Pirate’s Life can make the game a little more fun for a variety of players, whether they’re just starting out in the game or don’t have access to a crew but would still like to raise a sail and draw a sword.