The survival genre is great at creating intense moments when everything starts to go wrong. Your character is trying not to starve, desperate to build shelter, fighting off deadly creatures–all while hoping to create better tools that can allow for stronger defenses and greater exploration. But what’s often striking about survival games is how time-consuming all that gathering and crafting can be and how hard all the different requirements can be to keep straight. Enter Tribes of Midgard, which looks to take the basics of survival games and streamlines them into something that captures similar feelings, but decreases the density of stuff to keep in mind in order to reach them.

Developer Norsfell describes what it’s trying to do with Tribes as “creating a new genre” in the survival space. After getting a chance to play a few hours of the game, our translation of that mission statement is that Tribes is a version of survival where the busywork is toned down in favor of teamwork. You can play Tribes of Midgard with as many as nine other people, and while there are some of the usual survival elements–you start with nothing but a loincloth and your fists and have to make your way in a hostile environment–those aspects exist more to encourage you and your buddies to work together, without getting bogged down in spending a long time cutting down trees or mining metals.

“As a smaller developer, if you want to really shine, you’re not going to shine by making another FPS that’s very standard compared to other FPS,” Norsfell founder and CEO Julian Maroda said in an interview with GameSpot. “You have to find your own, maybe not niche, but at least find your own space, come with some new design, new elements to really attract the attention of publishers, the public, you name it.

“And that was really the starting point of Tribes–we were super fans of survival games, but at the same time, we could see that survival games weren’t as widely appealing to a large part of the audience. And the reason being that, as a human, we really understand the concept of survival, it’s in our genes, almost hopping into a survival game. But if you’re not familiar with the genre, it’s very harsh, and you usually die within the first 10 minutes. You’re hungry, you’re thirsty, you’re overburdened, you have all these things, like, ‘What the hell is happening to me.’ We wanted to take that genre and say, ‘How can we make that more inviting?’ How can we make it, instead of having to care about your own individual survival and maintaining all of these gauges, how can we move that to more of a cooperative experience and really make sure that there is just one gauge you need to maintain?”

The gauge Maroda is referring to is the Yggdrasil seed. Every time you jump into a session of Tribes of Midgard, your ultimate goal is to protect the seed, which is really more of a tree growing at the center of a small settlement. Unlike other survival games, you don’t build a base at the start of the game–it already exists, but your job is to maintain and defend it.

You do that by gathering resources from around the world to craft new gear tools, armor, and weapons, but even that process is quick and easy. Gather a few branches and flint and you can make a lumber axe or a pickaxe. Once you have those, every tree you chop down or iron ore deposit you mine is cleared in a single swing. Norsfell doesn’t want to bog you down on the mining or chopping in Tribes; your base can be upgraded through extra work to make it more formidable and useful, but you don’t have to spend time poring over where to place walls and structures. 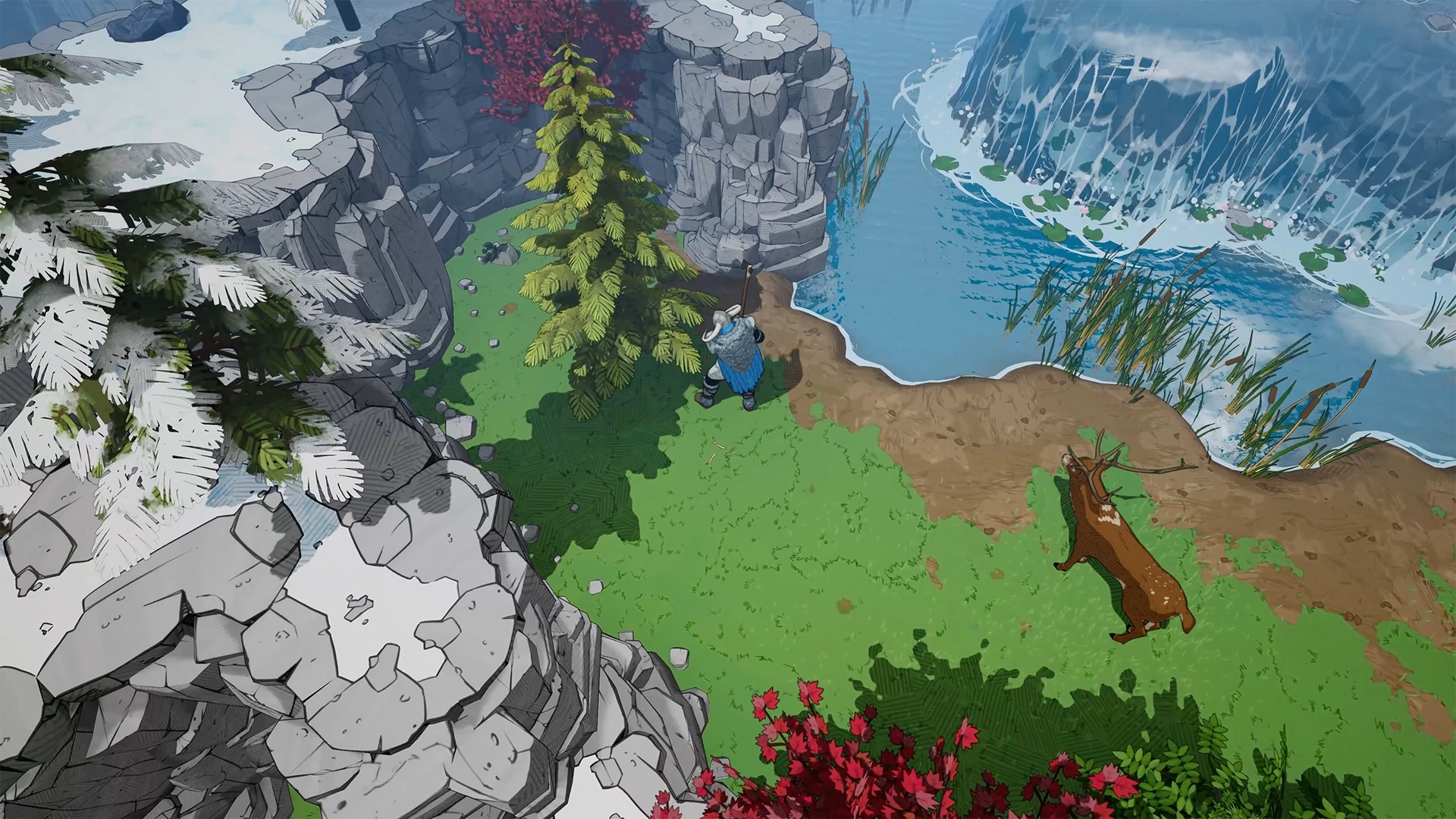 You can easily share materials with your teammates by dropping them into a community war chest, and crafting automatically draws from the common fund. Upgrades like gates you can close or archer watchtowers are built with a combination of crafting materials and souls, a currency you earn mostly from killing enemies. You’ll also spend souls on upgrading different NPCs in your settlement, like an armorer, weapon smith, and trapper, who you’ll use to create new gear. Anyone can contribute their materials and souls to any upgrade, making it easy to work together as a team to power up your settlement.

That streamlined, team-focused approach to the survival side of the game puts a lot more of the focus on exploration and combat, and in those regards, the game draws from other genres, such as roguelikes and Diablo-like action-RPGs. Every night, your settlement and its Yggdrasil seed are attacked by monsters called Helthings, which are bent on destroying the tree. Your only real survival focus, apart from not getting killed by enemies yourself, is in keeping the tree healthy. Every so often, bigger boss-like giants appear on the map, lumbering toward your village. These huge enemies can take a long time to defeat, so it’s important to figure out where they are, hunt them down, and attack them long before they reach your settlement. It might take you two or three fights to kill a giant, and you still have to defend the settlement in the meantime, as well. Fast-travel points around the map make it easy to get back on defense quickly, so while you’re putting some focus on survival aspects of crafting better gear, you’re always just a few minutes from another essential fight.

“We wanted to take that genre and say, ‘How can we make that more inviting?'”

Combat is also relatively simple. Depending on your weapon, you have a standard attack like swinging your sword or firing an arrow, and as you fight, you build up a mana gauge that lets you execute a weapon-specific magical attack that might hit enemies in a specific area or deal more damage. If you’re carrying a shield, you can block with it to defend yourself, and there’s a dodge roll to get you out of danger. But for the most part, combat is pretty light and loose, with an emphasis on the kind of weapon you’re using and how it best synergizes with the rest of your group.

“So those runes, once you have them on, you then start thinking about the class you want to play,” Maroda said. “We have one [rune] that, once you block a hit with your shield, it creates an explosion blast. Well, you better play either Guardian or Sentinel because those classes are more centered around tanking and defense and shielding. So you can say, ‘I have this and this and I can combine them.’ Like something that happened to me recently, having this plus a rune that makes it so that I regained HP when I am idle–I was just standing with my shield deployed, taking hits, and then blasting people whenever they would hit me and at the same time regaining health. And then I can use the Sentinel class to throw my shield and then just play around with that mechanic.”

Even progression between sessions is kept pretty simple, though. While your classes and character aren’t persistent, the crafting recipes you unlock along the way are, Maroda said. You’ll also earn a meta currency called golden horns on each run, specifically for killing giants. You can dip out of a session any time (even if your friends are still playing, in fact; Tribes of Midgard’s difficulty scales based on how many people are in the world and adjusts to the changing player count) and take your horns with you. The next time you jump into a session, you can spend your horns with some of the NPCs who populate your settlement to buy new runes, giving you a quicker start. Other progression elements come from doing things like clearing challenges and leveling up your character, which provides you items like crafting starter packs that give you gear at the beginning of a session. Those packs aren’t consumable; instead, what gear you bring to the start of a session can also factor into your long-term strategy and make getting into the meat of Tribes of Midgard a little easier.

We played a few hours of Saga mode, one of two that will be available at launch–the other is Survival, which is a more straightforward “stay alive as long as you can” approach to the game. The Saga mode provides you with objectives to work toward, like repairing a bridge and exploring areas of the world, and eventually seems to culminate in a boss fight. It’s not a narrative mode, though, Maroda said.

“We are never going to make Tribes that kind of narrative game with a ton of dialogue. That is not what we’re trying to achieve,” he explained. “We love adding a lot of lore and context to the game–almost every weapon is inspired by a tale. The descriptions are very lighthearted and play on some references. Same with pretty much the whole concept of the game, which is just playing around with Norse mythology because it’s so rich, it’s so vast, and it’s not so well-known.”

“We prefer to do it just like the way Norse mythology was carried over, which is a very oral tradition. And we much prefer creating the tools and ingredients that players can then take part in and say, okay, well, I jumped in this world and I did this Saga quest and I fought this creature. And then I did this and this happened to me. We much prefer players to share those kinds of experiences because, at the end of the day, that is kind of its oral tradition.”

Maroda also said the game will continue to expand over time with free seasonal content. That’ll include more Sagas, which will remain available for players to dig into over and over, or return to after new content has been released. Norsfell is also looking to expand on game mechanics over time,. While there are some light building mechanics in Tribes for making ramps and bridges to get around the world, you won’t be constructing bases–but that’s one example of an area of the game that Norsfell is looking to expand on later, Maroda said.

“We much prefer players to share those kinds of experiences because, at the end of the day, that is kind of its oral tradition.”

In general, Tribes of Midgard’s easygoing approach to survival is pretty refreshing. It’s nice to whack a tree down in one hit, share in the burden of upgrades with teammates, and focus on exploring the game’s procedurally generated world. It hits the marks of being a more approachable entry point into the genre that Maroda said Norsfell is going for. The question long-term will be how well the roguelike approach to upgrades and the larger focus on combat will carry the game forward–because often for survival games, half the appeal is in climbing technology trees, constructing bases, and bending the world to your will. But with a lot of ongoing free content releases planned, Tribes of Midgard seems like it has a lot of potential to give players interested in the survival genre an access point that captures what’s fun about adventuring in harsh worlds, without the kind of brutality and time investment that can sometimes make staying alive feel like a slog.

Look for Tribes of Midgard on PlayStation 4, PS5, and PC on July 27.