WoW Achievements Referencing Hos And Giant Sacks Will Be Renamed

In the wake of a state of California lawsuit alleging a culture of harassment and discrimination towards women at Activision Blizzard, the company has begun making changes to some of its games in order to remove certain content.

Part of that effort has been a vow to remove “not appropriate” references in World of Warcraft. Following the lawsuit’s allegations, Blizzard removed numerous in-game references to former WoW game director Alex Afrasiabi. That effort will continue with WoW’s upcoming 9.1.5 patch, which is currently live on the game’s public test realm. It’s there that players have discovered (via Icy-Veins) that two old achievement names that have not aged particularly well have been renamed.

One, formerly titled “My Sack Is Gigantique,” has been renamed to “My Storage Is Gigantique.” The achievement is earned from purchasing and equipping a Gigantique bag from a Burning Crusade-era Blood Elf NPC named Haris Pilton, a riff on celebrity Paris Hilton who asks players if their “sack is Gigantique?!” The character and her “catchphrase” even became a card in the WoW Trading Card Game (you know, the one that existed before Hearthstone was a thing). 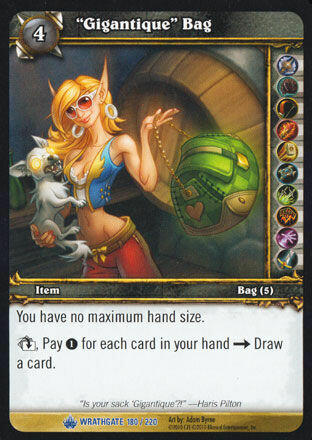 A holiday achievement named “Bros Before Ho Ho Ho’s,” which requires players to use a mistletoe on eight NPCs with the word “Brother” in their name, has also been renamed to “Holiday Bromance.”

Patch 9.1.5 will also see the removal of various in-game references to former developers like former lead level designer Jesse McCree (whose Overwatch character of the same name will undergo a name change) and the removal of the ability to direct the spit emote at other players.

Along with the removal of inappropriate content, patch 9.1.5 will bring with it numerous fan-requested changes, like the removal of Conduit Energy and the ability to freely switch Covenants. Patch 9.1.5 does not currently have a release date, but is expected to arrive sometime this fall.