In Sifu, Death And Aging Are Steps Toward Ultimate Kung Fu Mastery

With martial arts brawler Sifu, developer Sloclap is hoping to capture the meaning of kung fu, creating an experience of learning and mastery through practice. According to Sloclap co-founder and CEO Pierre Tarno, that means you should expect to die a lot as you brawl your way through the game. But as you do, you’ll become older, wiser, and stronger–both as a player and as a character.

Sloclap recently gave GameSpot a hands-off look at the three of Sifu’s five different levels, providing a more complete understanding of what your quest for revenge will actually play like. It’s a game that focuses heavily on executing combos, parrying incoming attacks, reading your opponent, and improvising to keep yourself from getting overwhelmed–and each death is a learning experience that makes you stronger next time.

You play a kung fu student whose family is murdered and you set out on a one-day quest for revenge against the five kung fu fighters responsible. To get to them, you have to fight through five different levels filled with each boss’s fighters.

In combat, Sifu will probably be familiar to fans of similar action games, including Sloclap’s precious martial arts title, Absolver. You execute combos through different combinations of light and heavy attacks, while also dodging, blocking, and parrying your enemies’ moves. Tarno said players should expect the game to be pretty challenging, and we got that impression from the hands-off presentation–enemies come at you fast and often in big groups, requiring you to learn how to deal with their moves, isolate fighters, and control the crowd.

You can’t just block your way to victory; you have a gauge that measures your guard strength, and as you take hits or block blows, it fills up, indicating when your guard will be broken, leaving you stunned. Enemies also have a similar gauge, and filling it leaves them open for a quick, cinematic takedown, while also replenishing some health. So there’s an incentive to play aggressively, especially because even taking a few hits can cost you dearly in health. Thanks to a special amulet that you wear, being defeated doesn’t mean you die–you just pop right back up to go on brawling. However, your age progresses significantly every time you’re killed, and if you age too much on a run, it’s game over. You’ll revisit these levels over and over, learning how to better handle them, with the goal being to finish the game without taking much of a beating.

“You’re going to want to finish the game as young as possible, because one of the themes that is related to aging is that question of the cost of revenge,” Tarno explained. “More likely than not, the first time you complete the game and beat all five enemies, you’ll be pretty old. So the character has devoted, in one day, 50 years of life in the pursuit of vengeance, and so, was it really worth it? And can you get your vengeance without spending your whole life on it?”

We didn’t see the aging mechanic in action, but Tarno told us a bit about how it works. He said the fantasy at play is the idea of becoming a wise master, but the drawback is that getting older takes a toll on your body.

“We’re still refining design on that front, but we’re currently playing with this idea where there’s this old master thing, where your attacks are more precise, more devastating, so you do more damage, but your body is growing old so you’re slightly weaker, so you’ve got less HP,” he said. “So you do more damage but you can receive less damage, so it’s sort of a balance exercise, which should orient you toward a more aggressive playstyle as you grow older, because you can suffer less damage. That’s sort of the idea we’re going for. But you won’t have a weaker character because that would be a bit depressing, I guess, if every time you revived you’d be weaker and weaker and so have less and less chance of moving forward in the game.”

We saw a brief portion of three different locations from the game: an apartment building, a nightclub that houses a secret fight club, and a museum. Each one presents a different kind of environment to fight through, and it’s essential that you pay attention to and use your surroundings, because taking advantage of the space around you is key to staying alive. In the apartment building, you fight your way up a big central staircase, which means you can potentially throw enemies over the railing into space. If you’re close to a wall or a ledge, you can bounce an enemy’s head off it or throw them into it. Pushing someone down a flight of stairs or out a window helps you to eliminate enemies quickly, and anything from empty glass bottles to pieces of furniture can potentially be a weapon to give you the upper hand.

From the looks of things, Sifu’s combat is all about keeping control of the situation, or getting out of harm’s way quickly. At one point in the nightclub, the player was backed into a corner, so they quickly scrambled up a decorative lattice on the wall behind them to reach the floor above. At another point, the player quickly rolled over a couch to put some distance between themselves and some enemies that were surrounding them. 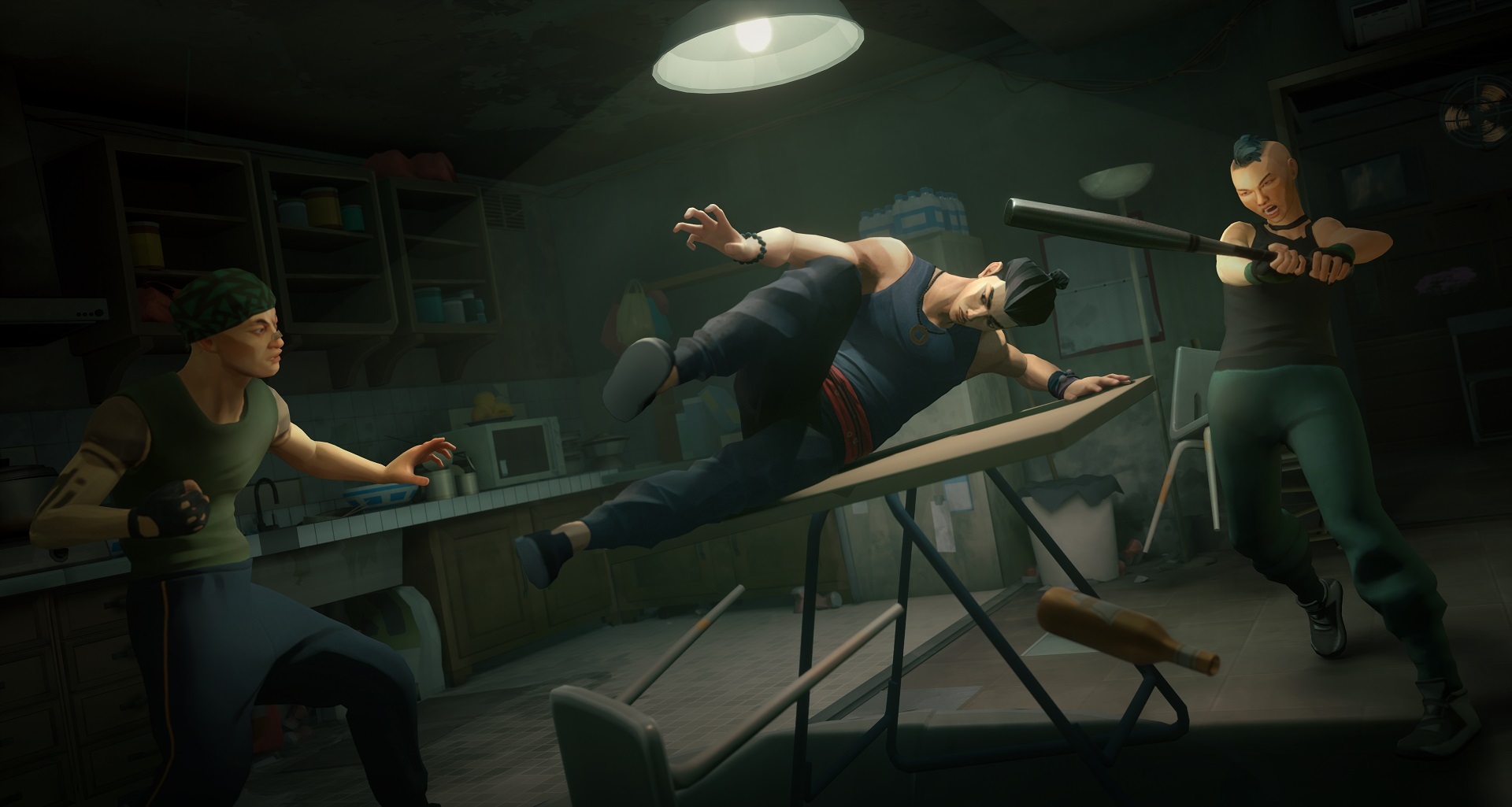 “It’s the sort of Jackie Chan fantasy of putting the environment between you and your enemies,” Tarno said. In the demo, after climbing the wall, the player was then able to attack two enemies as they ran up a flight of stairs to catch up, nailing one by throwing a bottle to isolate and beat down the other.

You can also unlock different moves that let you throw enemies into one another, swap places with them, or knock them down. Unlocking those moves and working them into your combos allows you to constantly think about how to control the fight, even when facing a crowd.

The same goes for when you’re fighting enemies with weapons. Knock an enemy down, and you disarm them, so you want to be thinking about how to get enemies off their feet and out of the fight before they slash you with a machete or nail you with a baseball bat. You can then grab their weapons for yourself–although Tarno said that weapon durability is pretty low, so don’t expect to carry the same blade or metal pipe through the whole game.

Finally, fighting well builds up a resource for your character called Focus. When you’ve got enough Focus, you can briefly slow down time, allowing you to pick from a group of powerful moves that have specific effects. One move might leave an enemy stunned, while another might knock them down or do extra damage. You can also unlock moves specific to the weapons you find, like blades, to deal massive damage under the right circumstances.

It seems like Sifu will have a whole lot of options for fighting, and it might be a lot to keep track of. Tarno said the player character has around 150 different attack moves, all created with the help of a real-life Pak Mai kung fu master, and that doesn’t count the many takedown moves. But you won’t have access to every move every time you play the game, as Tarno explained. Instead, it’ll take you time to unlock various different abilities, and for a while, you’ll only have them in a specific run.

As you rack up combos and beat enemies, you’ll earn experience points you can then spend at certain places to unlock new moves–either shrines you find in levels, which convey something like perks that only last through a given run through the game, or at your wuguan, the kung fu school you return to between levels. But while you can unlock a move during a run, you’ll lose it if you age out and die until you’ve spent enough points to unlock it permanently. That’ll give you time to figure out which abilities you like and want to use in your kung fu, and which you don’t.

That gives Sifu a bit of a roguelike flair, although Tarno clarified that the battles you’ll encounter are hand-crafted and the levels aren’t random. What’s different each time is the set of perks and moves you might have unlocked, especially as you fight and age. There are also elements of randomness as you play through a level. If you efficiently wail on a group of enemies, the one or two left standing might surrender, allowing you to avoid fighting them or even question them for information about the boss you’re chasing or what lies ahead in the level. But in the same situation, an enemy might become the “last man standing,” gaining a health boost and unlocking additional combos to become something like a miniboss. All the enemies have access to the same moves you do, so fighting these boosted characters will be a test of your knowledge and experience, and they can pop up semi-randomly.

So there are roguelike elements at play in Sifu, mixing up the play of a straightforward action game so that every run through the game isn’t exactly the same. But you’ll also be unlocking things that will persist between runs. Tarno described another element, a menu called the Detectiveboard, where you’ll gather information about each of the bosses and the levels as you play through them. The more info you have, the more paths you might unlock in a level, allowing you to access shortcuts to avoid fights. Again, the theme is mastery through practice, so you’ll replay levels over and over, learning their ins and outs and gathering info on your Detectiveboard, while also becoming a better fighter and unlocking more and more moves. It sounds like we can also expect multiple endings from Sifu; once you’ve cleared all five levels, Tarno said, you might want to reconsider your actions as you play again.

“There is that notion of runs because eventually, the objective of the game, beyond seeing the first ending, is that once you’ve tackled your vengeance, you’ll understand that the way you wreak vengeance is not compatible with the values of your clan, your family, or kung fu,” he said. “So you’re going to get your vengeance in a different way without being as violent toward the bosses, et cetera.” 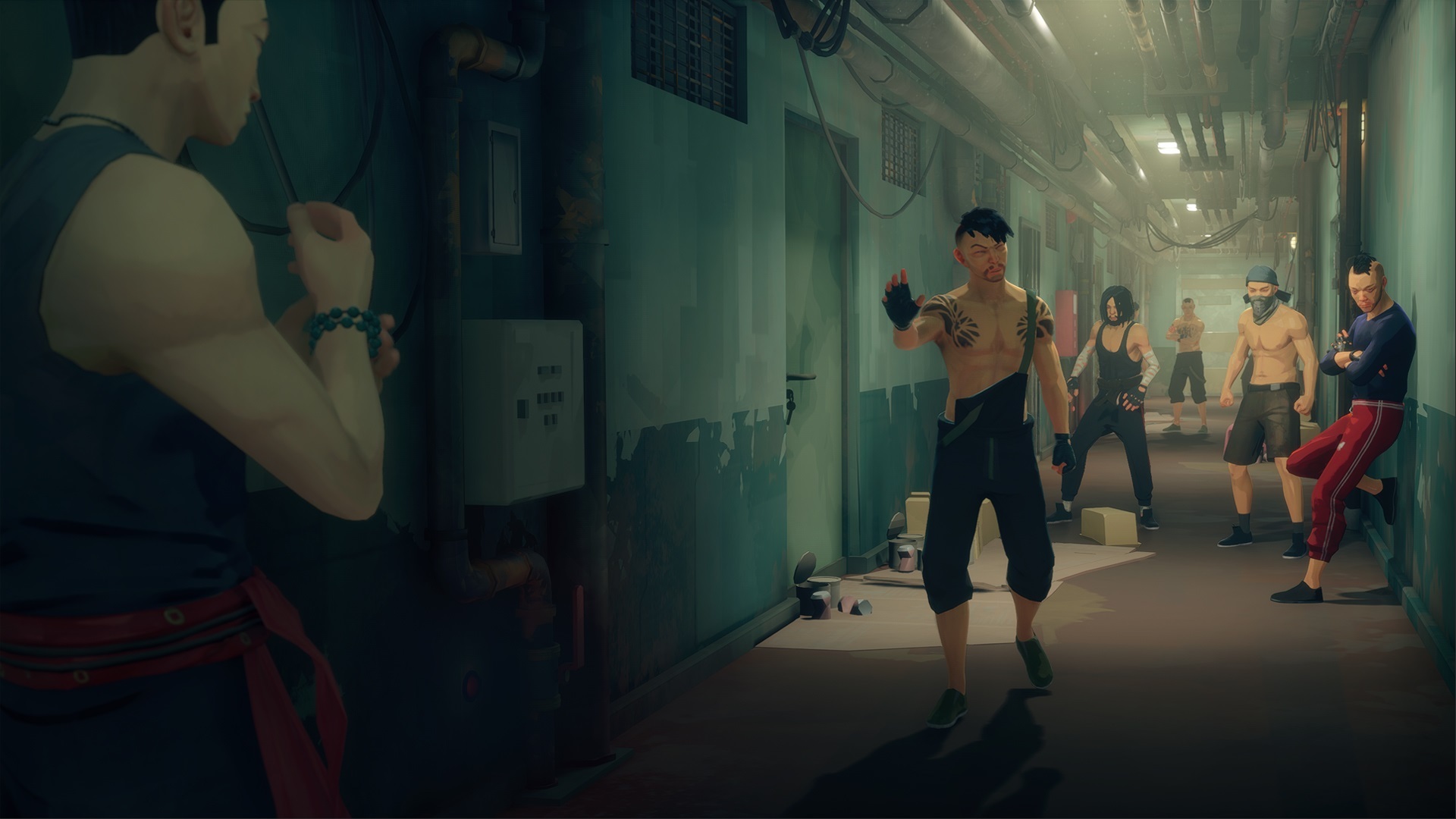 Though we only saw three brief sections of the game, it seems like all those systems will work together to make Sifu a pretty deep action experience, but one that’s excitingly cinematic. The focus on paying attention to and using the environment makes for some great improvised moments, like one in which the player battles a gang of enemies in a museum exhibit with a giant kunai-shaped pendulum–which swings around the room, nailing people and stunning them. There are also moments where the camera will shift perspective, like a hallway full of enemies that suddenly adopts a side-scrolling perspective, which Tarno said was an homage to the movie Old Boy and to classic 2D brawlers.

Tarno also said that, since this is an action game in which timing for blocks, parries, and strikes is essential, visual fidelity is something Sloclap is focused on. Expect the game to run at 60fps on both Playstation 4 and Playstation 5, Tarno said, and in 4K on PS5.

Everything we saw in the hands-off presentation makes Sifu look like an impressive, if tough and demanding, action game–one in which you’ll want to keep practicing to become a kung fu master.