I was not bowled over by the Razer Enki the first time I sat in it. Quite the opposite, in fact: My back, as it is wont to do, hurt for the first hour, and I wasn’t awash in comfort as I often am when I sit in a nice-looking new chair. But I soon grew accustomed to its feel and, hours later, I was struck by the fact that I wasn’t aching from a day spent mostly stationary. And that’s come to be my daily experience, minus the back pain–those initial moments in the chair aren’t overwhelmingly nice, but the Razer Enki makes long bouts of sitting a less grueling activity.

A chair that encourages you to sit for hours without standing likely isn’t what the doctor ordered, but for those who nonetheless lead that kind of lifestyle, the Enki should help reduce the toll doing so takes on your body. That’s thanks to a firm but comfortable seat that nicely accommodates your body with its “uawide,” just-plush-enough base. Razer says its goal with the Enki was to deliver a chair that provides all-day comfort, and in that regard, it absolutely delivers. The company highlighted its research into weight distribution when sitting in a chair, and while I can’t speak to the efficacy of those specific learnings, the end result is undeniable. 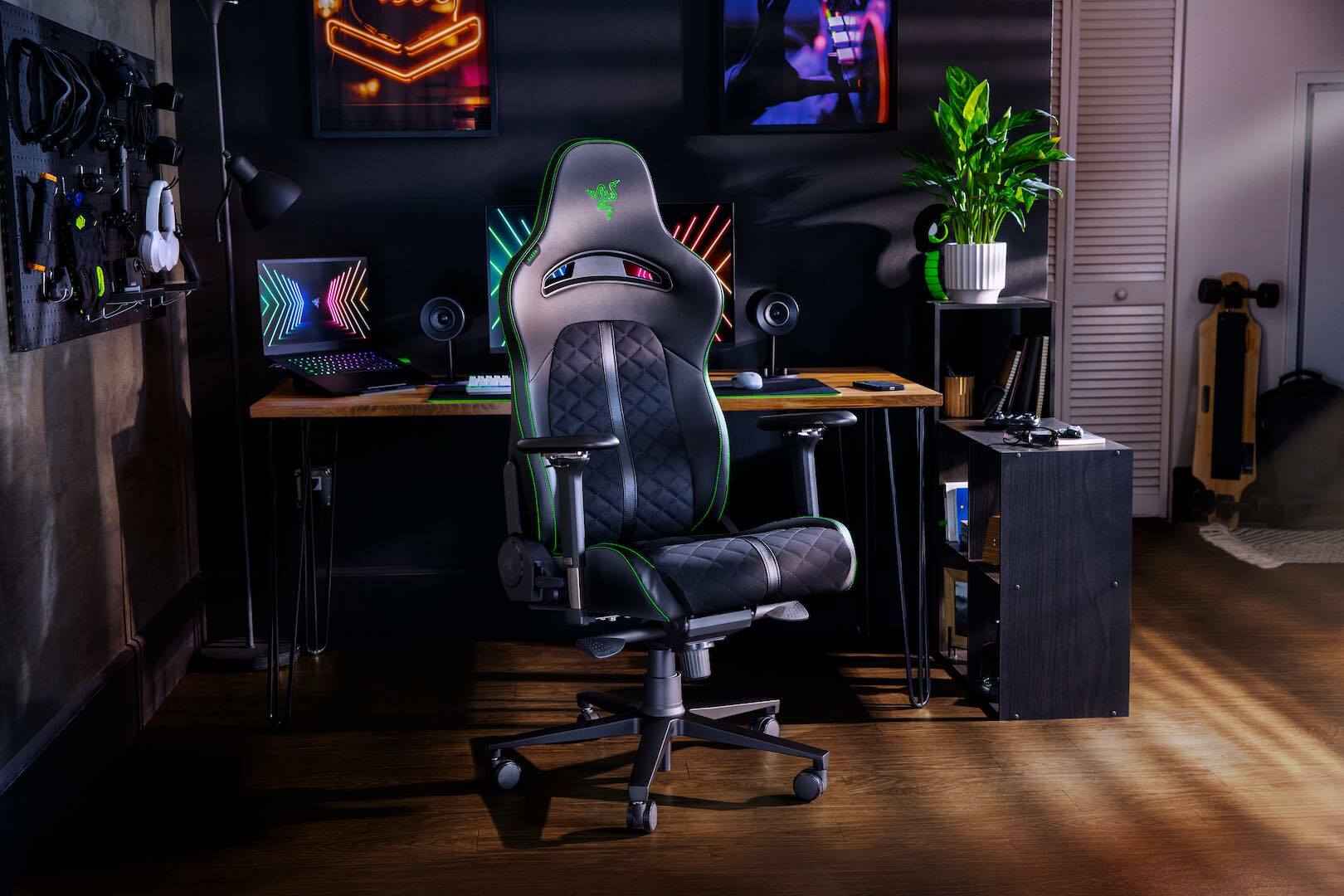 Gaming chairs can often feature flashy designs, but the Enki instead has a more minimalistic look that helps it to not stand out like a sore thumb. The version I tried features black leather and a textured backrest that in some regards more closely resembles an office chair than a gaming one. The green stitching and logo reaffirm that this is a Razer product, but in a subtle, pleasant way.

The Enki’s “4D” armrests are made of a solid but slightly soft material that felt good on my elbows, even after long stretches of being pressed into them. That’s more than I can say for the harder materials of other chairs I’ve used, which could hurt my elbows, and yet even after more than a month of use, the Enki’s show no signs of wear like the plush leather armrests that I’ve previously encountered.

They also sport what feels like a comical number of adjustments: The armrests can be individually raised or lowered, pushed in toward or away from your body, slid forward or backward, and twisted left and right. The latter option, specifically, was one I saw little use for, due primarily to the fact that twisting them causes one end or the other to overlap with the seat base, leaving my body with less space to shift to one side or the other. But for those who might wish to sit cross-legged, which the spacious base allows for, this could prove to be a welcome bit of flexibility. 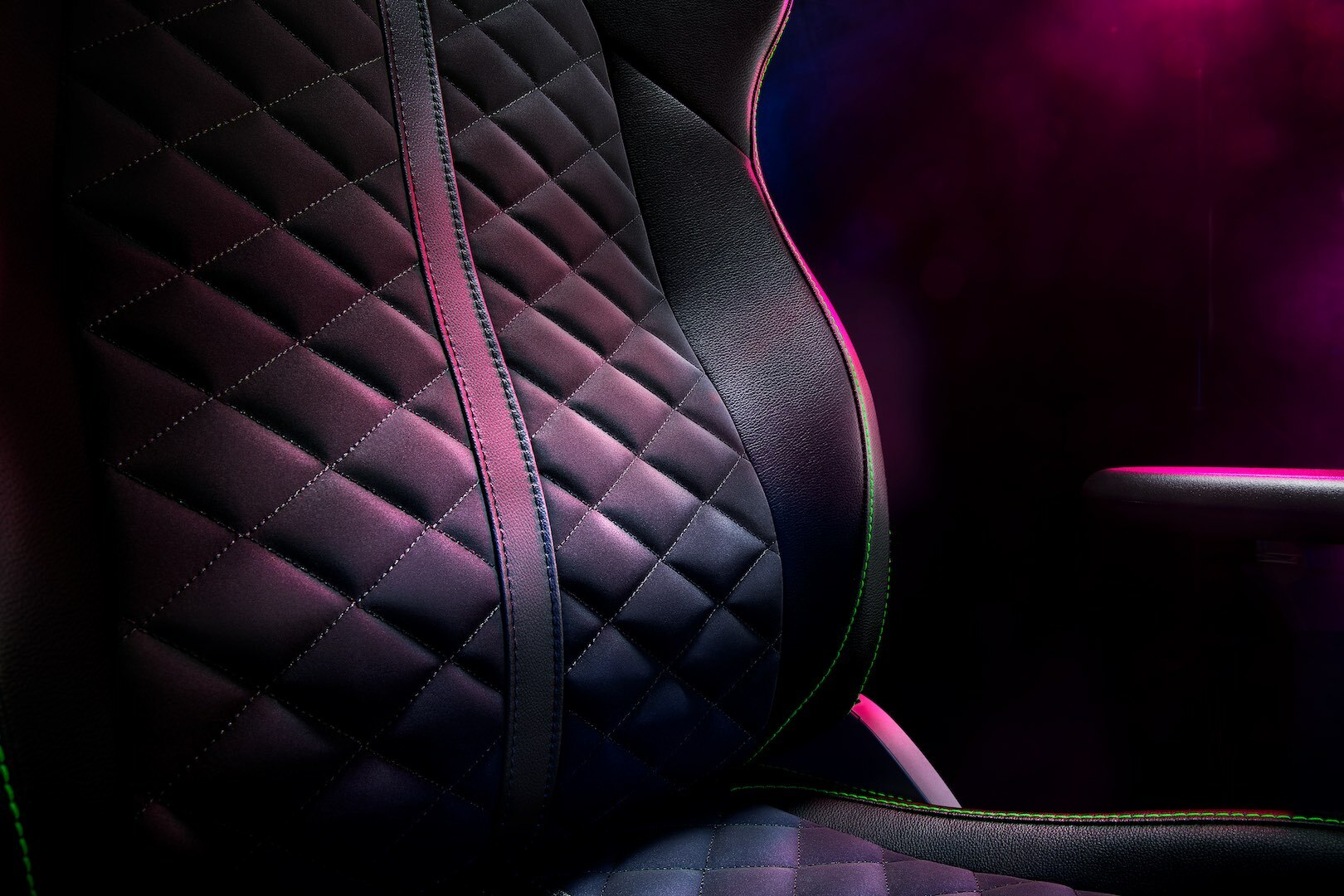 The Razer Enki doesn’t let you customize the lumbar support, but it remains comfortable over long stretches

Having four separate adjustments means there are quite a few buttons and levers to control these things, though. That meant making a tweak involved a bit of trial and error to remember which control handled which aspect of the armrest, and a moment of doubt as I thought, “Wait, is it even capable of what I’m trying to do?” The answer was invariably yes, and given the relative infrequency of needing to make these changes, it’s ultimately a minor gripe; I just wish the controls were more intuitive.

The Enki also supports a fairly deep recline, letting you tilt back up to 152 degrees and lock in at an angle in the middle. Again, this wasn’t a feature I made heavy use of since I was primarily looking to sit upright at my desk, but I was impressed with how stable the base was–I never felt like I was going to fall back. The Enki includes a head pillow that provides some added support while upright, though in my time with the chair, it only served as a small wedge to comfort my shoulders; when sitting upright at a desk, I’m never pressing my head back against the seat in order to notice it. But if you’re reclining significantly, it could come in handy, though I can’t imagine holding up a Nintendo Switch or other device over my head for long periods of time to play while reclining.

Razer will offer two different versions of this chair: the standard Enki for $400 and the Enki X for $300. I was only able to try the pricier of the two but was told by Razer that the X is effectively the same chair with a few concessions: You get a butterfly mechanism (rather than the Enki’s frog) and more standard “2D” armrests, and the head pillow isn’t included.

So with this many premium features, what makes this a $400 chair when Razer already sells the more high-end Iskur for $500? That seemingly comes down to the lumbar support. The Iskur is equipped with a fully adjustable lumbar curve that you can utilize to find what perfectly matches your back. The Enki, by comparison, features only a standard lumbar support setup that can’t be customized. That might explain the back pain I experienced when first trying out the chair, but since adjusting to it, I’ve found the included lumbar support is sufficient for avoiding any back pain. Of course, your miles may vary if you find that your back demands a specific curve that the Enki doesn’t offer, but I was pleasantly surprised by what’s included despite my initial skepticism.

Assembly is relatively simple and doable with just a single person, though having a second pair of hands will help during a few specific steps. I was surprised by just how nice Razer makes this process, including a pair of gloves and a hex tool with a grip that’s so nice I’m keeping it on hand for the future–it’s a much more premium-feeling tool than I’m accustomed to receiving when building cheap furniture from Target or Amazon. These details, along with the hilarious safety tips on the box (you shouldn’t stand on the reclined chair and surf, launch a rocket using the base, or have a caped man with a bladed weapon kick the chair forward while you’re sitting in it, it turns out), round out a nice package.

The Razer Enki didn’t blow me away with my first impression; had I briefly sat on one at a store or a friend’s house, I would have deemed it a not-especially-comfortable chair with Inspector Gadget armrests. But in spending more than a month of 8+ hour days in it, I’ve done a complete 180 from that. If you need a chair with a pleasantly minimal look that you can sit in for long stretches of time without paying the price later, the Enki might just be your answer.