Fortnite Chapter 3, Season 1 is here, and like always, we’re breaking down the new map changes in Fortnite’s latest season. This time, however, it’s a bit different. You see, what’s changed is, well, everything. After the previous island was flipped end over end, we discovered a new island was underneath all along. Fortnite’s third-ever island, Artemis, is now in the game and introduces players to a whole new world to discover. Artemis sports 12 new named locations, dozens of new landmarks, plus lots of hidden lore around the island; here are all the map changes in Fortnite Chapter 3.

Fortnite Chapter 3, Season 1 is tied together thematically by The Seven, the mysterious super-group led by The Foundation who plan on breaking The Loop once and for all. Scattered around the island are seven vaults–literally named Seven Vaults–and each one houses a cache of loot, just like the vaults from Chapter 2, Seasons 2-4. These vaults are guarded by non-hostile NPCs, but they’ll grow hostile in a flash if you harm them, so be careful.

If you want to learn a heck of a lot more about The Seven, you can travel to Sanctuary, their true homebase. It features a massive statue of The Foundation as well as several “Device” quests, which help tell more of the story surrounding The Seven versus the Imagined Order. Lore-wise, this is the most important portion of the island this season.

In the northeastern region, you’ll find The Daily Bugle, which seems to have arrived via a meteor much like Stark Industries last year. Spider-Man’s stomping grounds are full of webby trampolines, giving the area a unique traversal mechanic. The apartments surrounding the newspaper’s headquarters are loaded with loot. 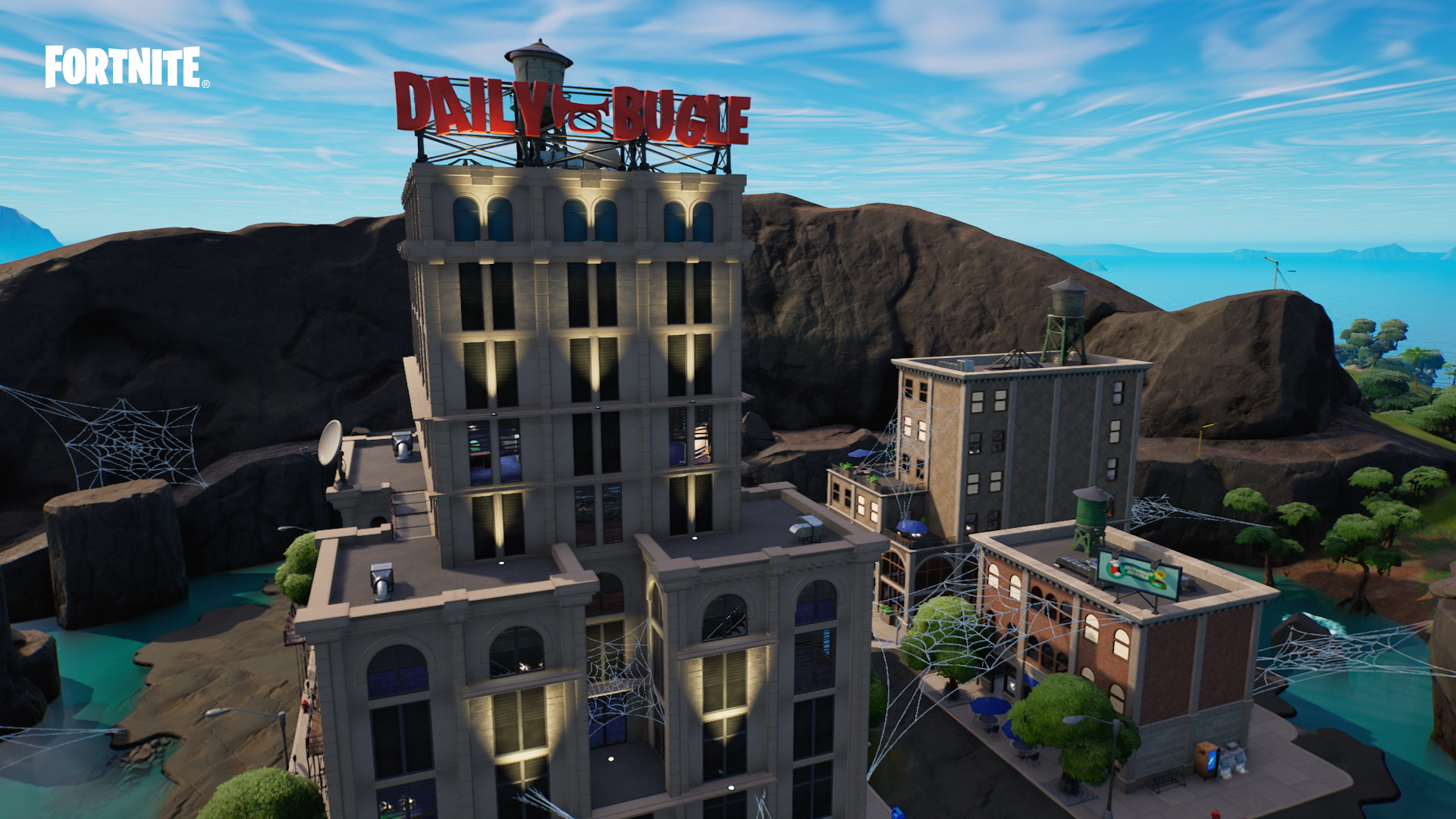 Listen closely and you may hear Jameson screaming for pictures of Spider-Man.

Up in the snowy region of Logjam Lumberyard, you’ll find special kinds of trees that actually topple when they’re cut down, rather than disappear. These timbers may cause players to shiver due to their massive size and weight, which can be used to flatten loopers or their builds if played the right way.

Chonkers Speedway is a special new dirt race track located in the southern dry desert biome of the island. Head here for easy access to Whiplash vehicles pre-loaded with off-road tires. A coalition of Joneses have taken up residence in the southeastern region, protesting their roles as middle men in a much older war they did not start. You can meet and greet at least one Jonesy there now, and it may be the case that more appear there during the season.

In terms of moving about the world, sheer cliff sides are back after being hardly present during all of Chapter 2. You’ll want to build your way down or else suffer fall damage. Meanwhile, when you actually can move down a sloped hillside, you can now do it faster than ever with momentum-based sliding. Learn how to slide in Fortnite, then try it out for yourself. On the game’s biggest slopes, it’s honestly quite thrilling, plus it can really save you when you’re running from the Storm or taking on enemies.

Most of the game’s Chapter 2 wildlife returns at launch, including wolves, boar, frogs, ravens, chickens, and sharks. No raptors are present for now (good riddance!), but Fortnite trailers have teased a forthcoming dino-like creature that looks absolutely massive and is rumored to be rideable.

The biggest new change beyond the terrain itself, however, has to be new weather systems. Tornados, lightning storms, and more are set to disrupt typical Fortnite rounds in the near future. Be prepared to seek shelter, and if that shelter isn’t so sturdy, be prepared to watch it blow away, most likely.

If you’re new to Fortnite Chapter 3, we’ve got plenty more to help you get up to speed, such as a look at all the new Fortnite weapons, an overview of the Chapter 3, Season 1 battle pass, and helpful hints on new things like tents and Victory Crowns.