Souls-like is a term that gets thrown around a lot, having become its own genre since FromSoftware’s Dark Souls franchise took off in popularity. Now, it’s practically impossible for players on any platform to not run into a Souls-like game when looking through a marketplace’s catalog. It’s a descriptor that some have grown tired of, but John Warner, the CEO of indie developer Over The Moon, isn’t afraid of embracing it for his studio’s next title, The Last Hero of Nostalgaia.

Over The Moon isn’t a fledgling studio, having two games under its belt already. Founded in 2013, the developer released The Fall in 2014, with a sequel coming out in 2018. The duo are narrative-heavy titles, with Warner describing the latter as a “cerebral experience” in an interview with GameSpot. The Last Hero of Nostalgaia is a step away from that heaviness for the studio, with Warner saying that he instead wanted to make something that was more “viscerally fun.”

“I am less and less interested in doing that level of intensity,” Warner told GameSpot. “I think that a really good story and interesting narrative ideas should be layered, so there’s something accessible and fun that you can pick up and play with.”

The Last Hero of Nostalgaia is the child of that idea, as well as Warner’s love of Dark Souls. Whereas The Fall 2 was a thinkpiece, The Last Hero of Nostalgaia shouldn’t be. Instead, according to Warner, it will offer a take on the established Souls-like genre but with some dark humor mixed in and a story that players won’t have to parse from the descriptions of weapons and other items. “This game is, in a way, a love letter to Dark Souls,” Warner said. “I love that series, I find it so fascinating and compelling. And the narrative elements are so mysterious and rich to me, but also so inaccessible. Which is in a way, part of the appeal I suppose.”

Though the game is a “love letter” in Warner’s words, it’s also part parody. The Last Hero of Nostalgaia mimics the first Dark Souls while crossing it up with The Stanley Parable’s own self-aware humor. Players will venture through the world of Nostalgaia, a place that is slowly dying as all of its inhabitants and the world around them are subjected to a gradual loss in fidelity. HD assets scale down to 64-bit, then to 32, and so on.

It’s the game’s version of Dark Souls’ hollowing, and as such, the player character is the most “hollowed” creature out there. A stick figure made up of a single line of pixels, players are tasked with restoring fidelity to the world before it’s wiped clean.

Combat in The Last Hero of Nostalgaia shouldn’t end up being anything new for Dark Souls fans. Warner’s love of the franchise extends to its combat, and how funny it can sometimes be, if you have the right sense of humor.

“Lots of things can be funny if you have a light heart and are willing to look at it that way,” Warner told GameSpot. “Dark Souls is a very funny experience. If you’re climbing across a tiny catwalk and you’re getting bombarded by arrows that knock you off, that’s funny.”

The Last Hero of Nostalgaia’s humor won’t just stem from putting players in punishingly difficult situations, though. Like The Stanley Parable, the game will also have a narrator, albeit one that razzes that player like they’re at a state fair dunk tank. “We have this narrator character, it’s one of the first things that we came up with,” Warner explained, “this narrator tha berates you and insults you. Not too much so that players will lose their mind in frustration, but we’re trying to play with the darkness of it… It’s not a joke game all the way through though. The key is understanding what we’re trying to do, that there’s time where it’s OK to be funny and there’s times where it’s not appropriate.” 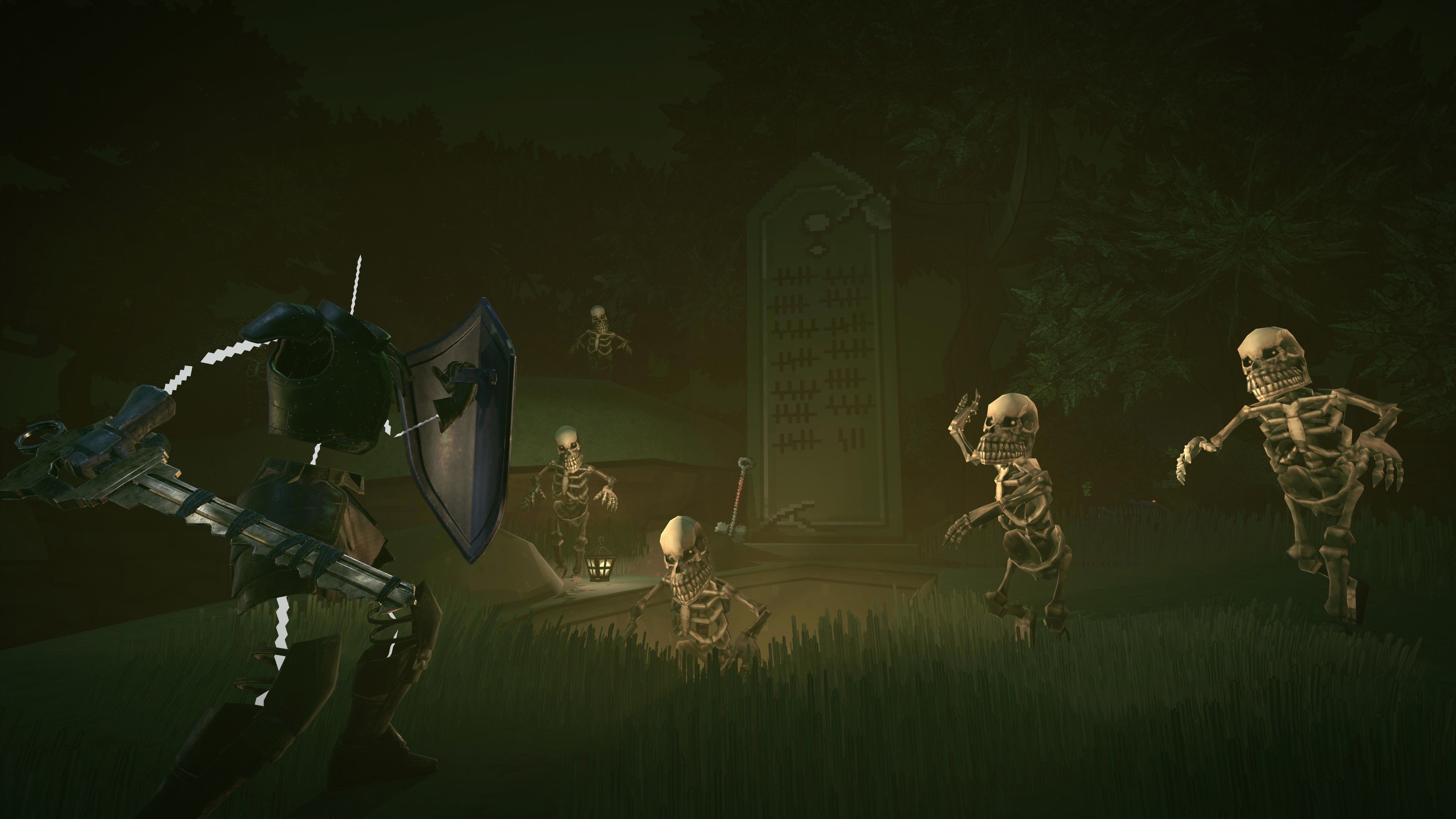 Balancing humor and the punishing gameplay of Dark Souls is a difficult task though. Warner wants the game to be a difficult experience, but it’s also essential that players will be able to hear its punchlines and puns. “This has been a long contested topic in our team,” Warner said. “The challenge, of course, is to create something that is really engaging and fun for players who enjoy a challenge, but isn’t needlessly brutal, confusing, and punishing for new players.”

As a result, the game is going to be open with the builds players can use. New players, for instance, can hide from enemies behind their shields, while more brazen players can ditch the shield and play the game like Bloodborne, moving around quickly. It’s still going to be a “harder game” according to Warner, but he added, “If we don’t have that then it’s going to be a bad game.”

Where The Last Hero of Nostalgaia will set itself apart from the Souls games though is in its storytelling. Tied directly into the main gameplay loop of the game, the weapons and items players pick up through the game will be “alive,” each with their own memory. Bringing these items to a location they remember, which will be hinted at through a small puzzle, will upgrade them, bringing them back to HD resolution and giving them new abilities. Players will also learn tidbits of Nostalgaia’s lore by unlocking the memories of their items, though there will be some mysteries left for players to discover on their own.

The Last Hero of Nostalgaia is set to release in 2022 on Xbox One and PC, with an optimized version arriving for Xbox Series X|S as well.