Best Of 2021: Hitman 3’s Berlin Level Is The Game’s Creative Carnage At Its Very Best

IO Interactive’s recent trilogy of Hitman games aren’t just a devilishly delightful collection of levels in which Agent 47 hones his talent for murdering billionaires and secret society socialites. They’re digital tourism, a trip around the world in 80 slays that hides secrets, opportunities, and macabre moments to make certain that karma catches up with people who think their wealth makes them untouchable by the long arm of the law. And one Hitman 3 level in particular stands out from the rest.

Every level is an intricate puzzle to solve, usually by seeing which method for finishing your target off works best. From Hitman’s sunny Sapienza to Hitman 2’s resplendent Isle of Sgail, it’s easy to lose yourself in the glitz, glamour, and grime of these locations spread across the globe.

And then there’s Berlin. On paper, a sandbox that is home to a secret warehouse rave, drug-smuggling bikers, and an impressive level of verticality is already ambitious stuff, but IO’s Interactive’s eye for detail turns that stage into a highlight reel for Agent 47 and his lethal talents.

The first time is the charm, as 47 starts out the level with nothing but his wits and a fashionable turtleneck sweater. Outgunned and outnumbered by several agents who are out for blood, Hitman 3‘s Berlin level forces you to use everything that you’ve learned up to that point to survive and thrive in hostile territory. For a game that emphasizes stealth over obvious brute force, rare moments like this provide some wonderful catharsis that feels earned. 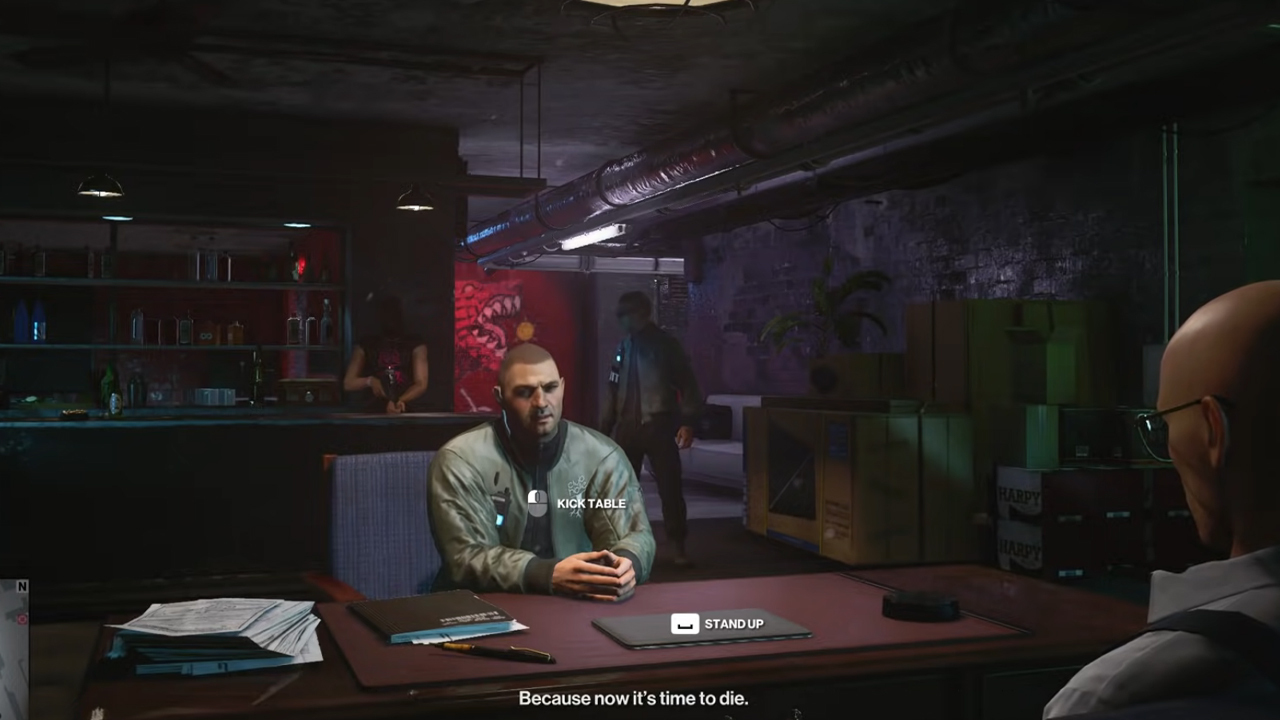 That’s one thing we can agree on, Agent Montgomery.

That sense of urgency, of experimenting with Hitman’s chameleonic skillset and working your way through a series of targets who are more alert than the usual, blissfully unaware Illuminati member makes for some of Hitman 3’s best gameplay and moments. Did you ever think you’d start the year by killing secret agents with an EDM laser-light show while you had a front-row seat from the DJ booth? How about pancaking an enemy using nothing but a construction crane, some bait, and a gigantic concrete pipe?

There’s even a moment in the game that is conceptually at odds with the very nature of Hitman, and yet it’s a perfect example of Berlin’s aggressive architecture. Disguised as the club owner, 47 sits with his back to the wall and a collection of ICA operatives on all sides who think they have the legend cornered. Pity that they didn’t think to check for a hidden shotgun in the room and prepare for a shootout that would do John Woo proud, right? And that’s just the tip of the iceberg in this gloriously-detailed level. 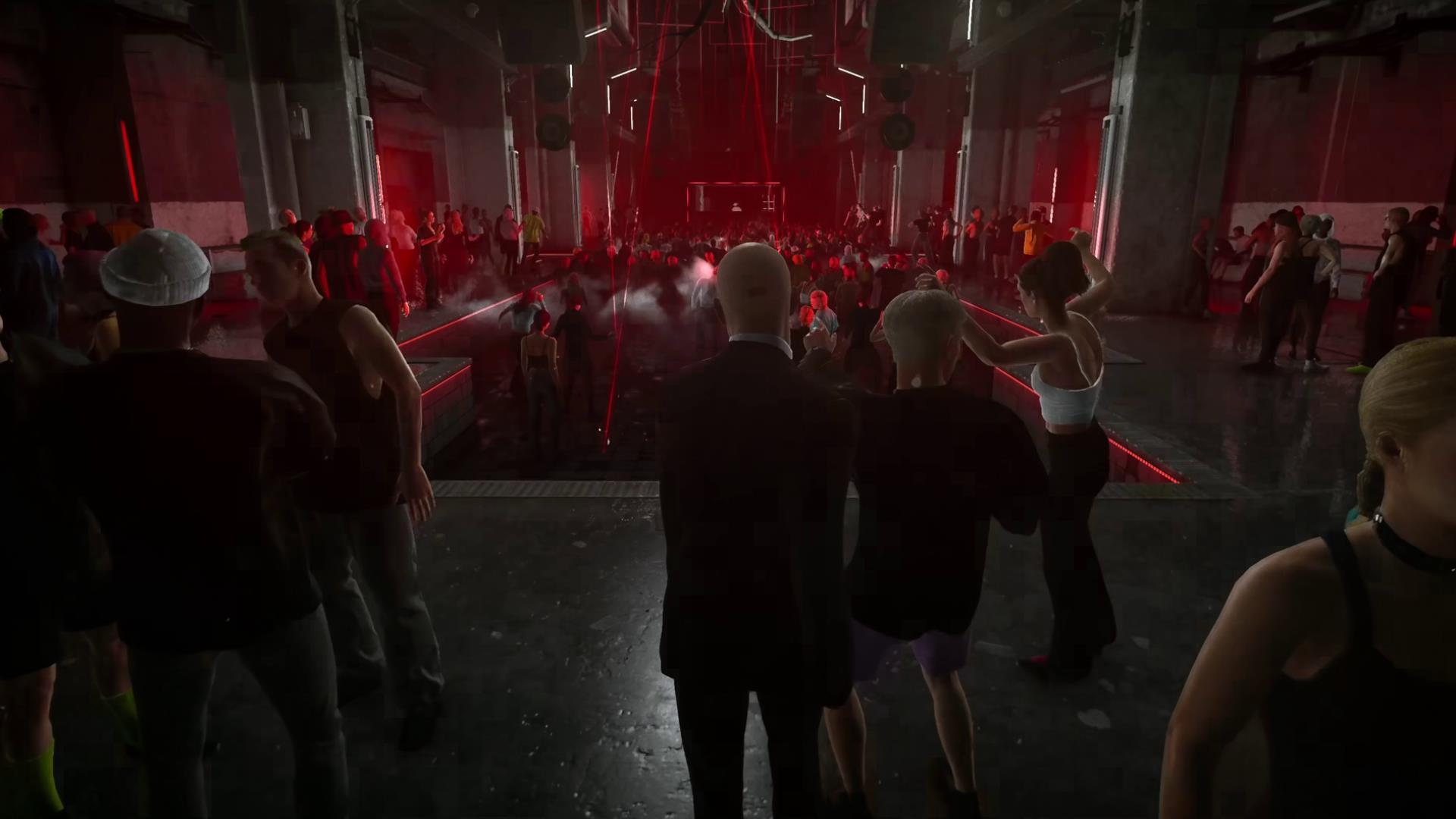 As you’d expect, repeat playthroughs reveal more optimal avenues for you to explore, but it’s the sheer amount of grim opportunity present in this level that makes it so memorable. Disguising yourself with 2000s rave-era clothing just so that you can smash a brick of powdered Californian corn flakes into someone’s face, the simple joy of pushing an inattentive agent off of a scaffold, or the foreshadowing that kicks in right before you unleash twin barrels of buckshot into the chest of an overly-confident special forces operative–they all combine to create some of the best moments in not just Hitman 3, but the entire world of assassination series.

It’s ICA agents versus predator, a delicious reminder of 47’s homicidal imagination is a force to be reckoned with. Hitman 3 is undoubtedly the pinnacle of the series, with every location featuring grand and sweeping vistas in which to ply 47’s trade, but Berlin is the standout level that encapsulates everything that’s fantastic about the recent trilogy into a layered and lethal sandbox of creative carnage.

« Intel apologizes to China for following US sanctions targeting Xinjiang ‘genocide’ » Refrigerate leftovers within 2 hours of cooking. Leaving food out too long can allow bacteria to grow to dangerous levels and make you sick. Don’t le…