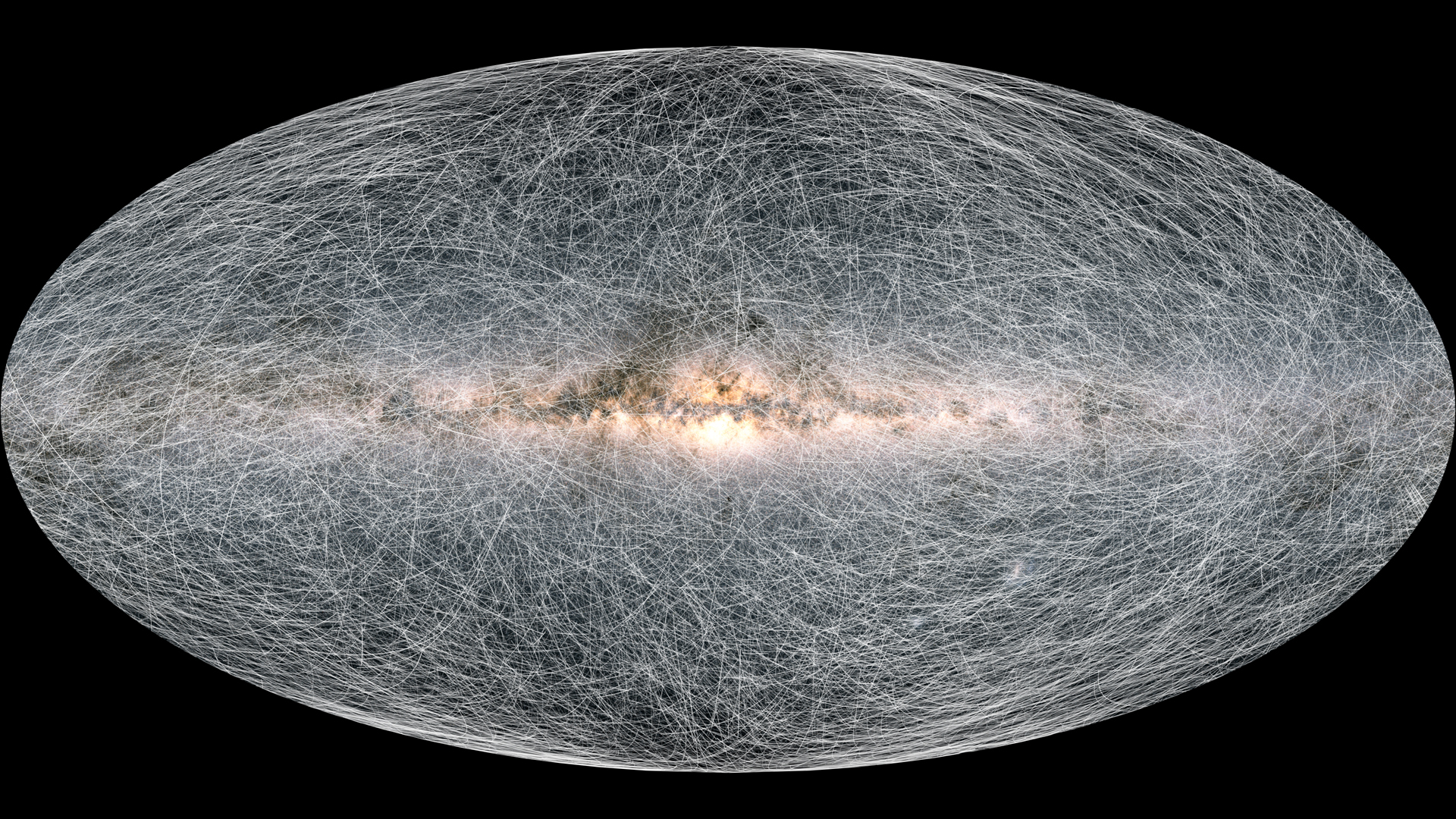 A treasure trove of data is set to answer some big questions about our galaxy.

The data, compiled by the European Space Agency’s Gaia mission, contains an unprecedented amount of information about more than 1 billion of the brightest objects in the sky. Astronomers hope the new data, which will be released June 13, will help solve some major mysteries about the birth and life of the Milky Way and the stars in it.

The Gaia mission launched in 2013 and is known for creating the most detailed map of the Milky Way by charting the precise positions, distances and velocities of nearly 2 billion stars. The upcoming data set will add a new dimension: It will reveal the chemical compositions of tens of millions of stars, allowing astronomers to answer important questions.

Hovering around Lagrange Point 2 (not too far from another groundbreaking mission, the James Webb Space Telescope), Gaia scans the entire sky about every two months. The 2 billion celestial objects the telescope sees make up only about 1% of the total stars in the Milky Way. But with the help of sophisticated computer algorithms and a lot of scientific knowledge, astronomers can extrapolate those measurements to learn about the galaxy as a whole.

Here are some of the most fascinating mysteries the Milky Way explorers are eager to crack with the new data.

Related: How many stars are in the Milky Way?

1. Where do stars come from?

By measuring the precise positions, distances and velocities of vast quantities of stars, Gaia does much more than map the Milky Way as it is today. Because objects in the universe follow the rules of physics, astronomers can model the past trajectories of those stars and essentially play the movie of the Milky Way backward and forward millions, or even billions, of years. But that was already possible with the previously released data. With the new data set, astronomers will be able to look for more.

For the first time, the Gaia mission team will release what they call “astrophysical parameters” for half a billion stars. These parameters, derived from the light spectra of the stars measured by Gaia (which are essentially the fingerprints of how these stars absorb light), reveal information about the chemical composition, mass, age, temperature and brightness of each of the measured stars. And that is a big deal, Gaia project scientist Jos de Bruijne told Space.com.

The Milky Way has four spiral arms, but astronomers still debate about their sizes and positions. (Image credit: NASA/JPL-Caltech)

“You will really get to know the stars,” De Bruijne said. “They basically tell you who they are. It’s like having an anonymous group of 500 million people and now you get to know every single one of them — their names, how old they are, where they came from.”

“It’s really unique that we now can do this with such a high number of stars,” De Bruijne said. “That’s something that is otherwise really difficult and expensive to do with ground-based telescopes, as it takes a lot of time.”

2. How does the galaxy “hang” together?

Although Gaia has been scanning the Milky Way since 2014, there is still a lot astronomers don’t understand about the galaxy. Studying our galactic home is not an easy task. Because we are inside the galaxy, we cannot “see the forest for the trees.” It is impossible even for Gaia to peer through the thick dust and gas clouds obscuring the Milky Way’s center (where the recently photographed supermassive black hole Sagittarius A* lurks) to the other side of the galactic disk.

But through the gradual improvements in Gaia data — and with the help of other observation techniques, such as radio astronomy — the big picture is coming together, piece by piece. That means we’re getting closer to solving some of the great puzzles, including the distribution of dark matter in the galaxy.

“All the stuff in the galaxy is exerting gravity at every star, and this gravity determines how fast the star moves,” De Bruijne said. “So by measuring motions of stars, you also probe the matter distribution in the Milky Way. And that is really important for figuring out how the galaxy hangs together.”

One of the lingering uncertainties related to the distribution of stars in the Milky Way is the galaxy’s trademark spiral structure. Astronomers mostly agree that the Milky Way has four spiral arms, the dense twisting streams of stars and gas that appear to emanate from the galaxy’s center. But there are quite a few points of contention around these spiral arms: Astronomers still debate the size and prominence of the individual arms, as well as their exact position in the Milky Way’s disk. The new data might help reveal the spiral structure with better clarity.

“With the astrophysical parameters that we now have, we can directly create samples of stars for specific science cases,” De Bruijne said. “We know that the spiral arms are mostly made of young stars. It’s where stars form. So, with the new data, we can look, for instance, at stars that are no older than 100 million years.” (In stellar terms, 100 million years is infancy. For comparison, our sun is 4.6 billion-year-old and will die in 5 billion years.)

Again, Gaia doesn’t only see the spiral arms as they are today; it allows astronomers to model the arms’ evolution into the past and the future.

With the new data, astronomers will be able to look farther away from the sun, thus directly sampling a larger portion of the galaxy’s spiral arms, Anthony Brown, an astronomer at Leiden University in the Netherlands and chair of the Gaia Data Processing and Analysis Consortium, told Space.com. Still, understanding the galaxy as a whole will remain a challenge.

3. What happened in the Milky Way’s “childhood”?

The Milky Way has grown over billions of years by devouring smaller galaxies that fall into its orbit. (Image credit: ESA/Gaia/DPAC)

Gaia measurements enable astronomers to perform what they call “galactic archaeology.” By reconstructing the trajectories of millions of stars, they can learn about events that happened in the distant past, billions of years ago. These events involve cataclysmic collisions with other galaxies, the ripples of which can be observed in the galaxy to this day.

One of the most famous discoveries that came out of the earlier Gaia data releases was the collision with a smaller galaxy called Gaia Enceladus, which happened 8 billion to 11 billion years ago. At that time, the Milky Way was much smaller than it is today, and when it devoured the smaller intruder, it experienced considerable upheaval. Brown said the collision with Gaia Enceladus was “the last significant merger that the Milky Way underwent” in its violent childhood. He hopes that with the new data set, astronomers will be able to look further back into the galaxy’s history and trace some of the even earlier collisions.

“We have already seen some authors trying to look more than 10 billion years into the past at the first hints of the Milky Way’s formation, some 12 [billion] or 13 billion years ago,” Brown said. “With the new release, we should be able to do this much better, thanks to the astrophysical information that we will be releasing. Now that we know the ages and the chemical compositions of stars, we can figure out the time order in which events happened, and we can also see where stars originally came from.”

Just as it emerged from violent collisions, the Milky Way will one day die a violent death. About 4.5 billion years from now, the Milky Way will collide with its nearest large galactic neighbor, the Andromeda galaxy. This collision is expected to happen at about the same time as the death of the sun, so humankind is unlikely to be around to see it. The new Gaia data release may, in fact, shed some light on this cataclysmic event, Brown said.

Gaia’s earlier data revealed that the Milky Way’s disk is warped, rather than flat.  It also wobbles like a spinning top as it rotates around the center of the galaxy. Astronomers think this wobble resulted from a not-so-distant galactic crash.

Brown hopes the new data will shed more light on this disturbance and its origins. The upcoming data release will contain information about the motion of more than 30 million stars in Gaia’s line of sight — that is, how fast they move toward or away from the telescope, or the so-called radial velocity. The prior releases contained radial velocities of only 7 million stars. The more information astronomers have, the finer the details their analysis tools can reveal about the galaxy.

“We can try to measure [the disturbance] in different locations in the galaxy or look at how it affects certain types of stars,” Brown said. “And this tells us a lot about what, exactly, caused the disturbance of the Milky Way’s disk. This is the kind of thing you can start doing with this much more expanded data sample.”

And more is yet to come

Gaia is currently the scientific mission that generates the most scientific papers, and according to De Bruijne, the best is still to come. The June 13 data dump will also contain the largest-ever set of information about binary star systems in the Milky Way, and De Bruijne expects that data to spawn groundbreaking discoveries.

In addition, Gaia has assembled the largest database of chemical compositions of asteroids in the solar system. The consortium processing Gaia’s measurements is developing increasingly better algorithms that enable scientists to learn more about the stars Gaia sees. The mission will continue scanning the sky until 2025, when it will run out of fuel. Two more big data releases are expected to follow the one on June 13, and they will bring new surprises, including thousands of newly discovered exoplanets, De Bruijne said.

« Bitcoin faces ‘uphill battle’ despite BTC price gaining 35% from $23.8K bottom » iOS 16 could be the most radical iPhone update in years