A large asteroid zips past Earth today, here’s how to watch it live 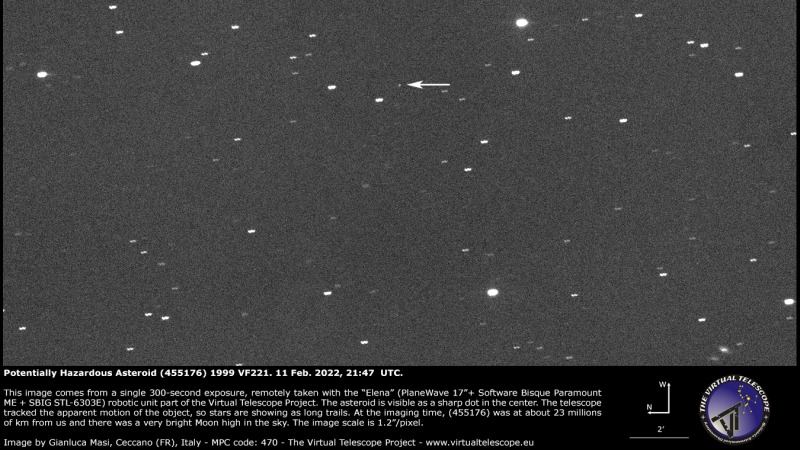 The Virtual Telescope Project will provide a livestream Monday (Feb. 21) of an asteroid zooming safely past Earth, weather permitting.

You can catch live views of asteroid 1999 VF22 starting at 7 p.m. EST Monday (0000 GMT on Tuesday, Feb. 22) from Rome, Italy, where the project is situated. You can watch the livestream on this page or directly from the Virtual Telescope Project if weather conditions allow.

“The Virtual Telescope Project will show it live, online, just before the fly-by time. This way, you can join the journey from the comfort of your home,” founder Gianluca Masi said in a statement.

Related: Just how many threatening asteroids are there? It’s complicated.

The asteroid was discovered in 1999 by the Catalina Sky Survey, according to NASA’s Jet Propulsion Laboratory’s Small-Body Database. NASA has a mandate from Congress to seek out rocks that are potentially hazardous to Earth, and so far has found no imminent threats after decades of careful searching.

While 1999 VF22 is classified as “potentially hazardous,” on this pass it will come relatively far away from our planet. Its closest approach will be roughly 3.3 million miles (5.4 million kilometers), the equivalent of 14 times the average lunar distance, according to Masi.

The asteroid has an estimated size of 1,017 feet (310 meters) in diameter and orbits the sun every 1.5 years, according to EarthSky. Astronomers are also using the Goldstone Radar Antenna in California to observe the space rock between Feb. 19 and 24, EarthSky said.

Masi also captured an image of the asteroid on Feb. 11 during a 300-second exposure remotely taken using a PlaneWave 17-inch telescope. During the image exposure time, he said, the asteroid was approaching Earth from a distance of 22 million miles (35 million km).