A once and future Mars: Finding the space history in ‘For All Mankind’ season 3 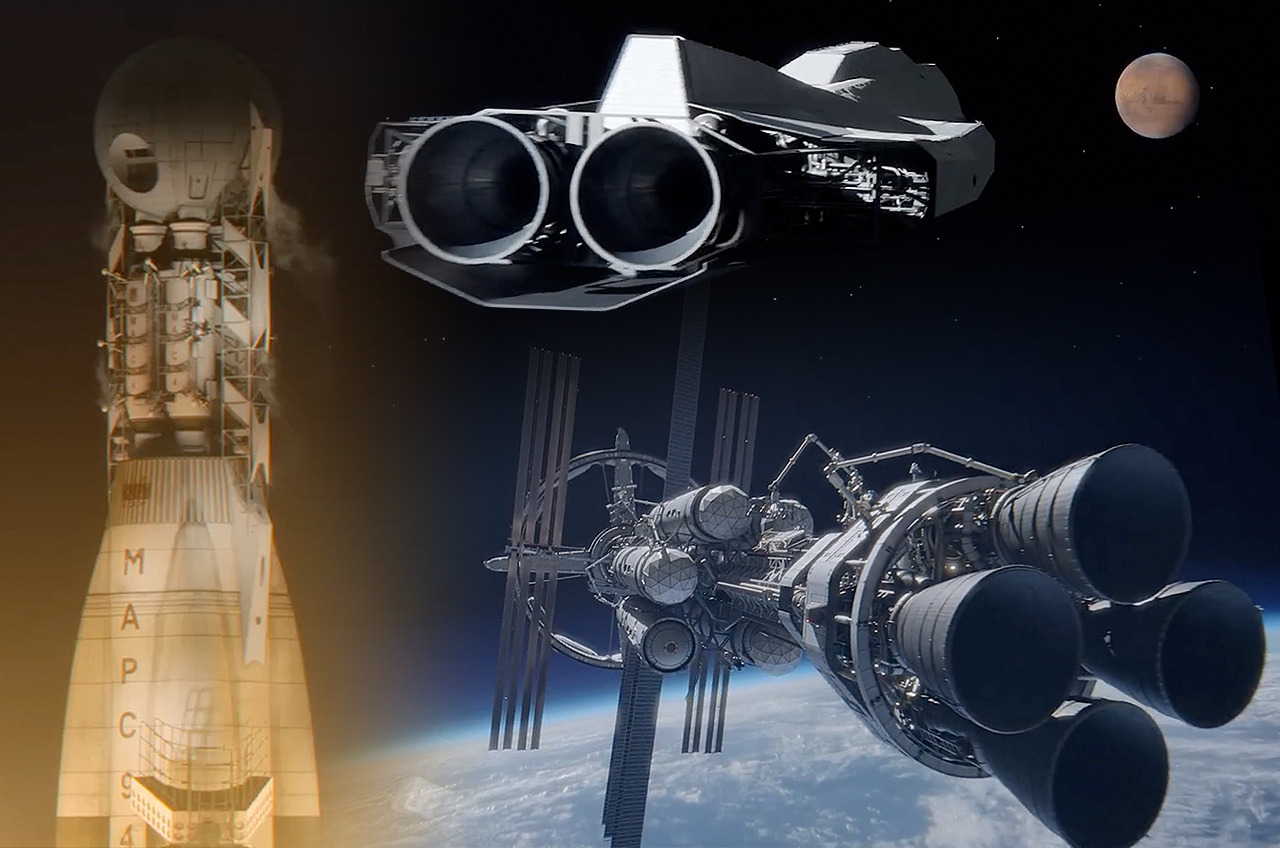 Were it not for a difference in our timelines, the title of the season 3 opening episode of “For All Mankind” might have been a spoiler.

In real life — as opposed to the alternate space history presented in the critically-acclaimed Apple TV Plus series (opens in new tab) — “Polaris” is the name of a three-mission, privately-funded program intended to advance the day when humans will launch to Mars. On the show, as revealed in the first few minutes of the first episode, “Polaris” is the name of a space tourism company and its rotating space hotel in Earth orbit.

For its first two seasons, “For All Mankind” has used real space events, programs and even people to ground its science fiction storyline in reality. That might have been the case this time, too, were it not for the fact that filming on the third season wrapped five months before the SpaceX-based Polaris Program was revealed to the world. Rather, it was just a coincidence.

That happenstance, though, is still one of the few remaining connections between our timeline and the one that diverged on “For All Mankind” two years ago, when the series began with the Soviet Union beating the United States (opens in new tab) to landing a man on the moon. Whereas before, characters like Ed Baldwin (Joel Kinnaman) and Danielle Poole (Krys Marshall) took on the real missions achieved by the astronaut Thomas Stafford, offering a sense of familiarity, where season three takes them — and us, the audience — is where no one has gone before.

“That was always the intention,” said Ron D. Moore, series creator and executive producer, in an interview with collectSPACE.com. “The Russians get to the moon first, but then we wanted to explore what are the next steps? Let’s move forward. There was a moon base and then two moon bases, and then, bigger shuttles and then mining on the moon. We wanted to keep building on top of these achievements, so by the time you get to the third season, the history has now diverged much more broadly, such that the changes that we are talking about have broad impacts on society and world history.”

Related: ‘For All Mankind’ season 3 sets up three-way space race to Mars

Mars is a harsh mistress in the third season of the Apple TV+ series “For All Mankind,” now streaming. (Image credit: Apple TV+)Staying tethered

As the final moments of season 2 and the advertisements leading up to Friday’s (June 10) debut have teased, season 3 not only takes the space race to Mars (opens in new tab), it adds a new competitor. In addition to NASA and the Soviets, a company, Helios, has set its sights on being first on the Red Planet.

For showrunners Ben Nedivi and Matt Wolpert, that meant leaving behind the familiar Apollo-inspired hardware that was so prevalent in the previous episodes’ moon-based scenes and the space shuttle from season two (opens in new tab).

“One of the conceits of the show is that the more advanced the technology gets, the more building they do, the better they get at building it, the faster they get, which is true when you look at how quickly SpaceX is churning out rockets,” said Wolpert.

That meant historical references could still be there (opens in new tab), but they needed to be deeper cuts.

The spacesuits used on Mars in season three of “For All Mankind” are based on the real suits planned for the red planet. (Image credit: Apple TV+)

“As much as we like coming up with new ideas, we still really try to ground the show in actual ideas, or even things that haven’t been executed but have been thought of,” Nedivi told collectSPACE. “The spacesuits [in this season] were based on actual NASA spacesuits designed for Mars. The Russian Mars ship is in large part the design that the Russians were thinking about for a Mars ship. Even the space hotel is based in many ways on early designs and ideas for that type of ship in Earth orbit.”

“For me, the exciting thing is bringing to life ideas that have been thought through and have been researched, but haven’t been created yet,” Nedivi said. “Season three, more than the previous seasons, has given us the opportunity to what we did with Sea Dragon [in seasons one and two], which is instead of using ships from the past, it is building ships in our own world that didn’t get that opportunity to come to life yet.”

The approach is what differentiates “For All Mankind” from “Star Trek,” both shows that Moore helped lead.

“It’s very important to us to stay tethered to what is possible to what you can actually do, even if some of these things are still more speculative,” said Moore. “They are still rooted and based on an idea of what is actually achievable, if we chose to try to do it.”

What’s past is prologue

Even with our history serving as an anchor, the format of “For All Mankind” — jumping a decade ahead with each new season — has made setting expectations difficult, even for the actors.

“I think the thing with this show is that it was always very hard to explain what the show was going to be after the first season,” said Kinnaman. “In the second season, it started to reveal itself because now people understood the big time jumps that the show was doing and the leaps in in technological development.”

“But I think in the third season, we’re starting to see that this also has become maybe the most grounded sci-fi show of all time and that’s the trajectory of where the show continues,” he said. “So we’re definitely in a new territory, but I felt we were in new territory halfway through the first season. Now we’re really feeling the time jumps and what that means and it’s pretty damn epic where the show goes.”

Danielle Pool (Krys Marshall) and Ed Baldwin (Joel Kinnaman) are back as veteran NASA astronauts in “For All Mankind. (Image credit: Apple TV+)

The third season advances the show from the mid-80s to the early 90s, but just because that was 20 years ago, it is not necessarily our past.

“This season, even though it’s only 1994 through 1996, feels very current day,” said Marshall. “The aesthetic of the Mars habs, the vessels that we take to get to Mars, the suits — it is the first time that the show really feels forward looking and futuristic.”

“What I love about the butterfly effect of our show is in the early seasons, in 1969, 1971 and 1974, the two lines between our timeline and the real timeline, there is very little daylight between them. But as they grow further and further and further apart, and now here we are in 1994, they’re worlds apart.”

Though they are far fewer in number, there are still some noticeable nods to real space history in season 3 of “For All Mankind.” Caution: Minor spoilers ahead.

Flight controller Aleida Rosales (Coral Peña) works at an upgraded console in Mission Control in “For All Mankind.” (Image credit: Apple TV+)As part of a montage of news reports summarizing the years’ major events between the end of season two and the start of season three, one of the clips shows that the Rogers Commission was convened to report on the “nuclear incident at Jamestown,” the U.S. moon base. In real life, the Rogers Commission, named for chair and former Secretary of State William P. Rogers, investigated the space shuttle Challenger tragedy in 1986.
The lead headline of the Houston Sentinel on June 16, 1987, reads “China Set to Open First Moon Base Next Month.” In reality, China was the third nation to launch its own people into space, but not until 2003. The country has since landed rovers on the moon, but its plans for a lunar base are still pegged towards the end of this decade, if not later.
Dennis Quaid and Meg Ryan star in “Love in the Skies,” portraying astronauts Gordo and Tracy Stevens, who met their tragic end on the moon in season two. Quaid, in real life, portrayed Mercury astronaut Gordon “Gordo” Cooper in the 1983 film adaptation of “The Right Stuff.”
The James Webb Space Telescope in our reality is the Thomas Paine Space Telescope in “For All Mankind.” Still named after a former NASA administrator, the fictional Paine died on Korean Airlines Flight 007 in season two. The Paine Space Telescope is launched on the Pathfinder space shuttle rather than European Ariane 5 as in real life.
NASA’s first crewed mission to Mars is named “Sojourner 1.” The real space agency called its first robotic Mars rover the same name as a tribute to the late Sojourner Truth, an abolitionist and women’s rights activist. The Sojourner rover was part of the 1997 Mars Pathfinder mission.
The design of the Polaris space hotel includes a truss and solar arrays that resemble the backbone and wings of the International Space Station.
Actress Wrenn Schmidt, who plays Johnson Space Center director Margo Madison, told collectSPACE that she styled some of her performance after a real NASA leader. “We work with a couple of great technical consultants named Denise and Mike Okuda and they told me about a book called ‘The Astronaut Maker.’ It’s about George Abbey, who, outside of NASA, is to most people pretty much unknown.”

“He was kind of an interesting person to research because he was a very polarizing figure,” said Schmidt. “Some people loved him, and some people hated him, and so I thought he was really interesting to read about when I was thinking about season three.”

The Enterprise, a flight-worthy version of the prototype space shuttle orbiter from reality, is still flying at the start of season three, having just completed an orbital repair of the Paine space telescope.
NASA’s Mission Control Center in Houston has replaced its Apollo-era CRT displays with flat screen monitors. The real flight control rooms made the same switchover beginning in 2006.
NERVA, or Nuclear Engine for Rocket Vehicle Application, was a joint effort by the Atomic Energy Commission and NASA to develop a propulsion solution for a mission to Mars, a lunar base and sending probes to the outer planets. It was canceled before it could ever be used in 1973. In the “For All Mankind” timeline, it is still under development and being test fired at the Jamestown moon base.

The 10-episode third season of “For All Mankind” (opens in new tab) debuts globally with the first episode on Friday (June 10), followed by one new episode weekly on Apple TV Plus.

Watch For All Mankind on Apple TV+