Aquarius constellation: Everything you need to know 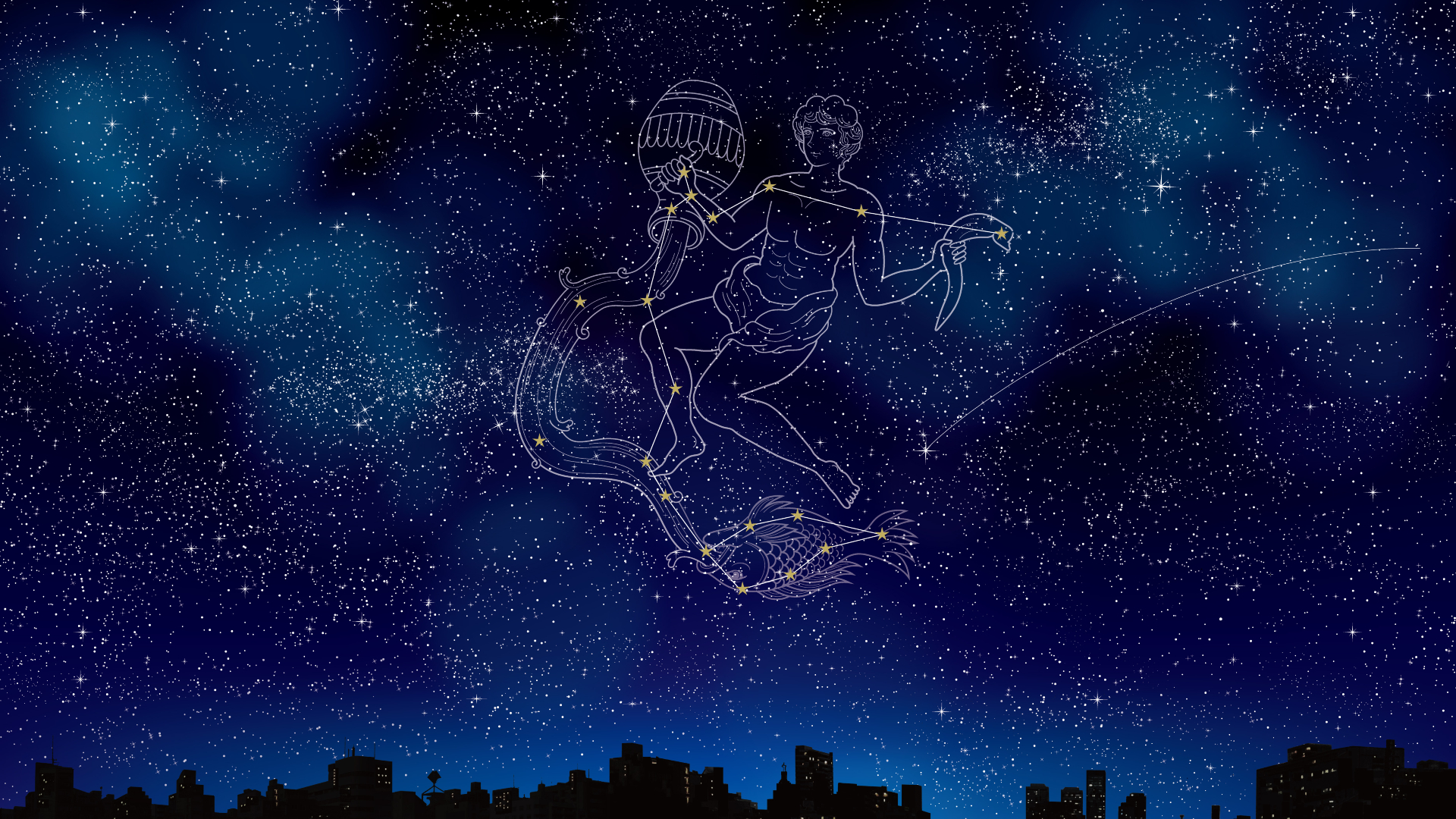 Aquarius is a constellation in the Western Zodiac and one of 88 official constellations according to the International Astronomical Union (IAU). The constellation describes a large group of stars that ancient Greek astronomers saw as a picture in the night sky. Aquarius was said to represent a “cup bearer” or “water bearer,” which is what its name means in Latin.

Aquarius is one of the oldest constellations documented in the historical record, first recorded in the second century by the Greek astronomer Claudius Ptolemy.

Now, scientists and skywatchers look to Aquarius to find Earth-like planets in the Trappist-1 system, and to catalog the stars, meteor showers and other astronomical objects associated with that region of the sky.

Related: How many stars are in the universe?

Vicky Stein is a science writer based in California. She has a bachelor’s degree in ecology and evolutionary biology from Dartmouth College and a graduate certificate in science writing from the University of California, Santa Cruz (2018)

Where is the Aquarius constellation?

Aquarius is the 10th largest constellation in the sky according to astronomy writer Ian Ridpath (opens in new tab). But there are no particularly bright stars in the constellation and it can be difficult to view with the naked eye. Even so, it covers about 980 square degrees and takes up more than two percent of the night sky when visible.

How to spot Aquarius from the Northern Hemisphere:

Visible: Between 65 degrees and -90 degrees

Best viewed: During October at 9 p.m.

Aquarius is located near other water-related constellations: Cetus (the whale), Pisces (the fish), Delphinus (the dolphin) and Eridanus (the river). This area is often referred to as the water or sea section of the sky, according to EarthSky (opens in new tab).

What stars make up Aquarius?

The brightest star in the Aquarius constellation, according to Star Facts, is a rare yellow supergiant known as beta Aquarii, also known as Sadalsuud. While its mass is just five times that of the sun, its volume is close to 50 times the sun’s volume, according to a 2017 paper from The Astronomical Journal (opens in new tab). The star has a magnitude of 2.87, according to a 1966 paper published in the journal Communications of the Lunar and Planetary Laboratory (opens in new tab), which means it appears relatively dim in our sky. It is nearly 600 light-years from our sun.

Alpha Aquarii, or Sadalmelik, is also a yellow supergiant star, writes the astronomy website (opens in new tab) Star Facts. It is located around 520 light-years from the sun and has a magnitude of 2.95.

Gamma Aquarii, or Sadachbia, has a magnitude of 3.8 according to Constellation Guide (opens in new tab). Zeta Aquarii is at the center of the Y-shaped configuration that forms Aquarius’ water jar. The other stars in the asterism forming the jar are gamma, phi and eta Aquarii. The “stream of water” pouring from the jar consists of more than 20 stars, ending with the star Fomalhaut.

Aquarius includes several planetary nebulas. For the best view of these objects, we recommend using binoculars or a telescope. If you need equipment, our best binoculars and best telescopes guides may help.

In order to find the planetary nebulae, it’s helpful to know their magnitude, right ascension (RA) and declination (Dec).

Magnitude tells you how bright an object is as it appears from the Earth. The lower the number of an object’s magnitude, the brighter the object. For example, an object of a -1 magnitude is brighter than one with a magnitude of +2.

Right ascension is to the sky what longitude is to the surface of the Earth, corresponding to east and west directions. It’s measured in hours, minutes and seconds.

Declination tells you how high an object will rise in the sky. Like Earth’s latitude, declination measures north and south. Its units are degrees, arcminutes and arcseconds. There are 60 arcmins in a degree and 60 arcsecs in an arcmin.

NGC 7009 is one of the brightest planetary nebulae in the sky, and can be found in the Aquarius constellation. NGC 7009 is also known as the Saturn Nebula, for the cloud of dust and hot gas that blew out from a dying star and formed the approximate shape of the planet Saturn. (Planetary nebulas were so named because early observers mistook them for planets, even though they are not planets at all.)

According to the ESO, the Saturn Nebula tells a story about the lives and deaths of low mass stars to astronomers using the Multi Unit Spectroscopic Explorer (MUSE) tool on the ESO’s Very Large Telescope. The Saturn Nebula was first observed in 1782 by Sir William Herschel, a German-born British astronomer.

Aquarius also boasts one of the closest of all planetary nebulae — NGC 7293, or the Helix Nebula — which is less than 700 light-years from Earth. Like many planetary nebulae, the Helix Nebula emits waves across a broad swath of the spectrum, from ultraviolet to infrared, and appears similar when viewed in each wavelength. According to NASA, that’s one of the most intriguing features of this type of object.

What are scientists looking for in Aquarius?

Aquarius hosts the ultracool star TRAPPIST-1, which is only 40 light-years from Earth (about 10 times the distance from our planet to the nearest star system, Alpha Centauri.) In 2017, astronomers announced that the star hosts at least seven exoplanets, all Earth-sized worlds that are likely also rocky. Many of these planets orbit in the habitable region of the star — the zone in which water could potentially exist on the planets’ surfaces.

Planets were first discovered around this star using Chile’s Transiting Planets and Planetesimals Small Telescope (TRAPPIST), in 2010. Follow-up observations have been performed with observatories such as the Very Large Telescope (VLT) in Chile and NASA’s Spitzer Space Telescope, but astronomers say a more detailed look may need to wait until NASA’s James Webb Space Telescope can examine the system.

Related: The 10 most Earth-like exoplanets

In astrology, which is not a science, Aquarius is the 11th sign in the Zodiac and represents those born between Jan. 20 and Feb. 18.

The Greeks linked this constellation with Ganymede, the cupbearer to the gods, or with Zeus pouring life-giving water on the Earth, wrote NASA’s Chandra X-Ray Observatory.

Because the rising of Aquarius coincided with the rainy season in the Northern Hemisphere, many other cultures also associated these stars with water. For example, wrote the observatory, Arabic astronomers identified the same constellation as a “well-bucket” and named many of its stars to include the word “luck,” possibly because seasonal rains were considered good fortune. Chinese, Indian, and Babylonian astronomers also constructed water-related myths around these stars.

Related: What’s your zodiac sign? (It may not be what you think it is)