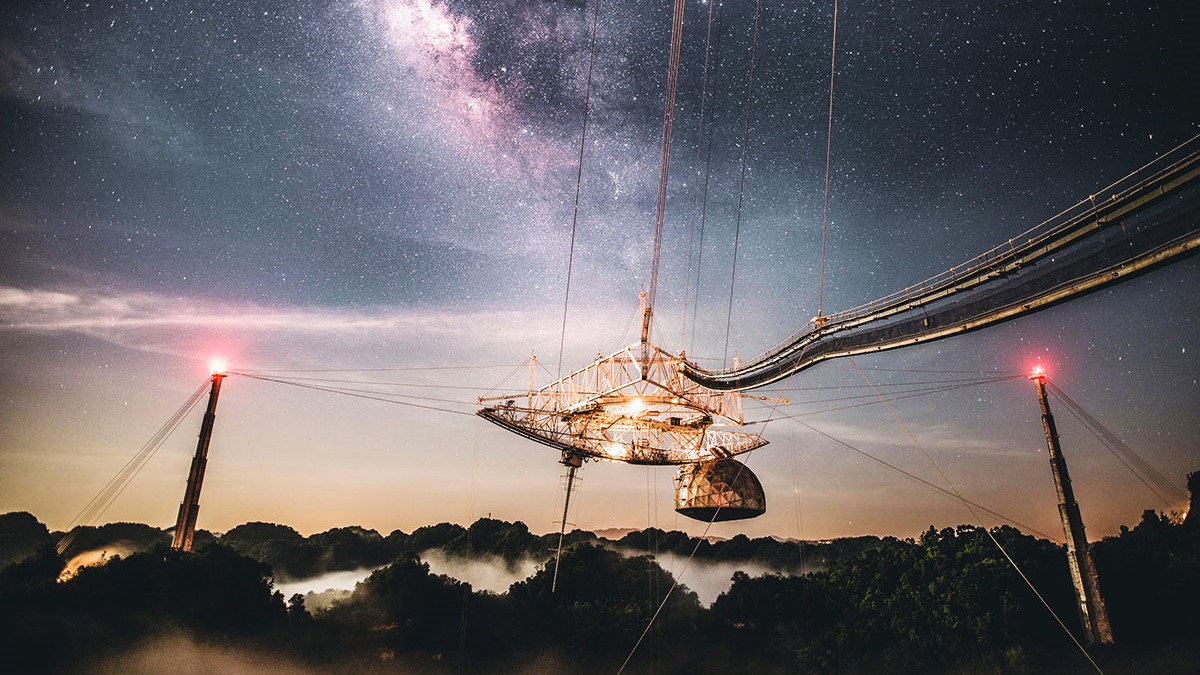 Arecibo Observatory, located in Puerto Rico, was the world’s second-largest single-dish radio telescope until its sudden collapse on Dec. 1, 2020. Despite strong support from the astronomy community to build a replacement facility, the National Science Foundation determined in 2022 it would not rebuild the iconic telescope.

The striking Arecibo was iconic both for its science and for its appearance, as it included a platform suspended high above a gigantic radio dish, rising out of a tropical forest.

Arecibo contributed an astounding catalog of astronomy work, including contributions that led to two Nobel prizes, during its half-century in operation. But it is perhaps most famous for being the site of the huge Search for Extraterrestrial Intelligence (SETI) message directed at the globular cluster M13 in 1974.

Besides its scientific work, Arecibo was the location of a climactic fight in “GoldenEye,” a 1995 James Bond film starring Pierce Brosnan. It also featured in “Contact,” a 1997 film based on a novel by Carl Sagan.

In February 2018, the National Science Foundation (NSF) — which provided most of the observatory’s funding since the 1970s — announced that it would cut its annual contribution from $8 million to $2 million in the following five years. In April 2018, the University of Central Florida in Orlando took over the management and operations of the observatory.

Arecibo never made it that long. On Dec. 1, 2020, the radio telescope’s science platform collapsed after the National Science Foundation had decided the facility was too precarious to repair. Scientists around the world, but especially Puerto Rican astronomers, mourned its loss, but experts say the loss of the observatory was inevitable given the recent lack of funding for scientific infrastructure.

From military observatory to civilian astronomy

The first function of Arecibo was supposed to be studying the ionosphere, a region of the upper atmosphere that is important to understand to properly transmit radio signals, according to an NSF fact sheet (opens in new tab). The Advanced Research Projects Agency (today’s DARPA) was interested in this region to advance ballistic missile defense projects, which meant the observatory attracted military funding from the Office of Naval Research and the U.S. Air Force (as Space Force had not been created back then.)

The Air Force-managed telescope was dedicated in 1963 and hailed as the world’s largest radio telescope, but in a few short years it was already facing funding issues as ARPA’s research budget diminished. The NSF agreed to become Arecibo’s caretaker in 1967 and the research transferred to the civilian sector and astronomy.

NASA came on board in 1971 through a cost-sharing agreement with NSF, allowing for the dish reflector to be resurfaced and for more radar equipment to be added. The partners brought in a new dome and a second line for ionospheric radar in 1997. In these decades, NSF wrote, “Arecibo became a powerful tool for scientific research focused on ionospheric physics, radar and radio astronomy, and aeronomy.”

When the telescope concluded its work, Arecibo was part of the National Astronomy and Ionosphere Center. The National Science Foundation had a cooperative agreement with the three entities that operated Arecibo: SRI International, the Universities Space Research Association and Puerto Rico’s Metropolitan University (UMET).

The reflective dish was 1,000 feet (305 meters) in diameter, 167 feet (51 m) deep, and covers an area of about 20 acres (81,000 square meters). A triangular platform was suspended 450 feet (137 m) above the dish by three concrete towers. The platform held the azimuth arm, a dome containing two subreflectors, and a set of antennae that could be tuned to a narrow band of frequencies.

Arecibo was the largest radio telescope until July 2016, when China finished the Five-hundred-meter Aperture Spherical Telescope’s (FAST) giant dish. That dish — the size of 30 football fields — is 1,650 feet (503 m) wide.

A timeline of key discoveries made by the iconic Arecibo observatory.  (Image credit: Future) (opens in new tab)Arecibo message

Arecibo broadcast a pictorial message into space in 1974, aiming for M13 — a globular cluster of stars. It will take some time for the message to get there, as M13 is about 21,000 light-years away.

According to SETI, the broadcast is roughly the same as a 20-trillion-watt omnidirectional broadcast. In simple terms, the broadcast would be visible by just about any receiver in the galaxy that is about the same size as the antenna at Arecibo.

These 14 radar images show the near-Earth asteroid Didymos (65803) and its moonlet as seen by the Arecibo Observatory radio telescope in Puerto Rico in November 2003.  (Image credit: NASA) (opens in new tab)

“We translated the radio-frequency message into a warbling audio tone that was broadcast over speakers at the ceremony. When [the tone] started, much of the audience spontaneously got up and walked out of the tent and gazed up at the telescope,” recalled past Arecibo director Harold Craft in a 1999 Cornell University press release (opens in new tab) marking the 25th anniversary.

In the decades following, SETI has trumpeted the message as a significant step to helping understand the challenges of communicating with aliens. “Although it’s unlikely that this short inquiry will ever prompt a reply, the experiment was useful in getting us to think a bit about the difficulties of communicating across space, time, and a presumably wide culture gap,” SETI wrote on its website (opens in new tab).

Arecibo was frequently used for finding asteroids that swung close to Earth. The observatory focused on those that could pose a danger to the planet, making an effort to accurately measure their sizes and gauge the potential impact they could have. (To be sure, there are no immediate threats, but scientists keep searching just in case.)

In 2013, for example, the observatory watched the arrival of asteroid 2012 DA14, which passed within 17,200 miles (27,000 kilometers) of Earth. It was a close flyby, but NASA emphasized the asteroid passed by at a safe distance.

Besides asteroid research, Arecibo was also the site of the Planetary Habitability Laboratory at the University of Puerto Rico at Arecibo. The group has a habitable planets catalog that tracks the number of alien worlds in other solar systems that could be in the Goldilocks zone, or area that is not too hot or cold for life, of their respective stars.

On Sept. 20, 2017, Hurricane Maria ravaged the island of Puerto Rico, damaging the Arecibo Observatory. The Category 4 storm killed hundreds of people and caused widespread power outages that lasted for months. Power to the observatory was restored on Dec. 9, 2017.

The most significant damage was to the 96-foot (29 meters) “line feed” antenna, which was suspended above the radio dish. It broke off during the hurricane and punctured the dish below when it fell. A federal spending bill passed in February 2018 to provide relief to Puerto Rico allocated $16.3 million to repair the Arecibo Observatory.

“Emergency repairs that needed immediate attention, such as patching roofs and repairing electrical feeds, have been underway since May after the site received hurricane-relief funding,” the University of Central Florida said in a statement (opens in new tab) issued in August 2018. “Additional repairs that will require more time and expertise will be completed as soon as possible.”

An image of the Arecibo Observatory’s iconic radio telescope as seen between two serious cable failures that preceded the facility’s collapse. (Image credit: University of Central Florida) (opens in new tab)Decommission and collapse

On Aug. 10, 2020, one of the massive cables supporting the Arecibo Observatory radio telescope’s science platform failed, leaving a 100-foot gash in the radio dish below. Although at the time scientists were optimistic about potential repairs, on Nov. 6, 2020, another cable snapped, leaving the towers and platform too unstable to repair.

That was when, on Nov. 19, 2020, the NSF declared the observatory a loss. Researchers mourned the end of the iconic structure, especially Puerto Rican astronomers. One Puerto Rican scientist, Emily Alicea-Muñoz, said that it was a point of pride for the island. “We may be a tiny little island in the middle of the Caribbean,” she said, “but we can do big science.”

Experts like Raquel Velho say the loss of the observatory was inevitable given the recent lack of funding for scientific infrastructure. A new inquiry was launched into the matter in February 2022 to determine what other factors, if any, created the sudden fall. While scientists remained hopeful that a new observatory would be constructed, the NSF announced in October 2022 that the funding was not available to make that happen, although they do plan to put an educational institution on the famed site.

“We were worried that it could be even worse than this, that they might say, ‘OK, just close down everything,'” Abel Méndez, an astronomer at the University of Puerto Rico at Arecibo who used the telescope in his research and teaching, told Space.com when the news was announced. “But my particular hopes were higher.”

This aerial view shows a hole in the dish panels of the Arecibo Observatory in Arecibo, Puerto Rico, on Nov. 19, 2020. (Image credit: RICARDO ARDUENGO/AFP via Getty Images) (opens in new tab)Arecibo legacy

While Arecibo itself is no longer operational, its data always will be accessible through an archive and will allow scientists to make discoveries indefinitely. The telescope collected 57 years of data on pulsars, asteroids, galaxies, planets and many more interesting objects around the solar system and universe at large.

The impact of the Arecibo’s loss was felt around the globe. And not just by researchers, since the observatory became “potently symbolic, almost sacred” to those touched by the facility, according to science writer Nadia Drake (opens in new tab). Drake’s family had been involved with Arecibo research for decades, particularly through her father Frank’s work with Project Ozma.

In a 2021 presentation (opens in new tab) at the 52nd Lunar and Planetary Science Conference (LPSC), presenters wrote that Arecibo left an “indelible mark on planetary science, radio astronomy, and space and atmospheric sciences,” and they expressed the sorrow surrounding its collapse in a wistful haiku: “Six decades’ service / Arecibo’s telescope / Lost, not forgotten.”

An image of Arecibo Observatory’s iconic radio telescope before damage that began in August 2020; the curved azimuth arm and the dome suspended from it are both visible. (Image credit: University of Central Florida) (opens in new tab)Additional resources

Taylor, P.A. and Rivera-Valentin, E.G. “The Legacy of Arecibo Observatory in Planetary Science and Beyond.” 52nd Lunar and Planetary Science Conference 2021 (LPI Contrib. No. 2548). https://www.hou.usra.edu/meetings/lpsc2021/pdf/2179.pdf (opens in new tab)

« Lyrid meteor shower 2023: When, where & how to see it » Galaxy Digital discloses $77M exposure to FTX, $48M likely locked in withdrawals