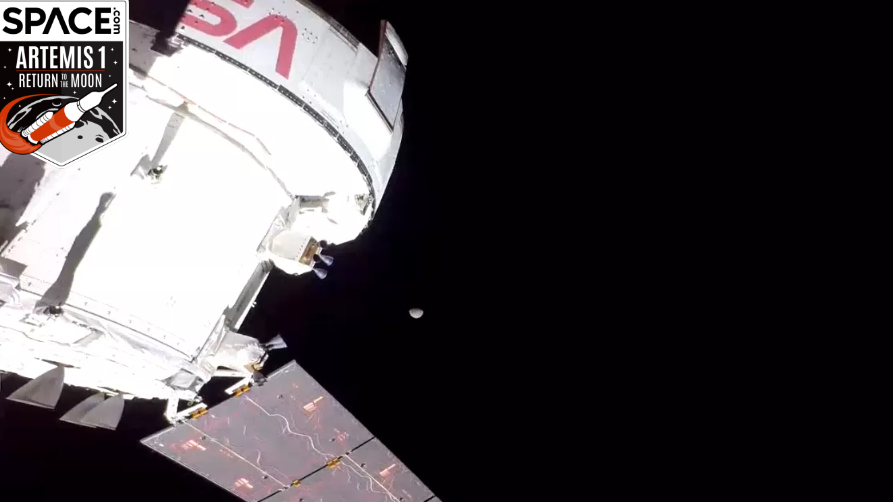 NASA’s Orion spacecraft has spotted the destination of its Artemis 1 test flight the moon and captured a stunning video to mark the moment.

In a video released Friday (Nov. 18), the half-lit moon is visible in the distance with the Orion spacecraft in the foreground, complete with NASA’s “worm” logo, as seen from a camera on the tip of one of the capsule’s four solar wings. At the time, Orion was about halfway to the moon, NASA said in a statement.

“On the third day of the Artemis I mission, Orion maneuvered its solar arrays and captured the moon with a camera mounted on the end of the array,” NASA wrote in the video description (opens in new tab).

NASA launched Orion on is uncrewed Artemis 1 mission on Wednesday (Nov. 16) atop the agency’s first Space Launch System (SLS), which is now the world’s most powerful rocket. Orion will fly a 25-day trip to the moon and back on a shakedown cruise that will return to Earth on Dec. 11. NASA is using the mission as a flight as a test for its Artemis program to see if the SLS rocket and Orion are ready to fly astronauts to the moon, with a crewed lunar landing targeted for 2025.

The moon comes into view of NASA’s Orion spacecraft in this still image from a video captured from the Artemis 1 mission’s capsule on Nov. 18, 2022. (Image credit: NASA)

The video is the latest amazing view from Orion, which is equipped with 24 cameras dotted along its exterior, solar arrays and interior to chronicle its historic test flight.

In the hours just after launch, Orion’s captured a crescent Earth falling behind as it made its way to the moon. Check it out below.

NASA has also launched a new Artemis All-Access video series that will provide weekly updates on the mission as it ventures to the moon and back.

The first episode, which NASA also dropped on Friday, chronicles the first three days of the Artemis 1 mission, including stunning views of spacecraft separation from its SLS rocket upper stage, cubesat deployment milestones and an update from NASA’s Dan  Huot on how the mission has gone so far. Take a look in the video below to check it out.

So far, Orion’s flight has gone relatively smoothly, with NASA mission managers saying it has exceeded their expectations, despite minor hiccups as engineers learn how the spacecraft performs in deep space.

On Monday morning (Nov. 21), the Artemis 1 Orion will make its closest approach to the moon in a flyby, coming within 60 miles (100 km) of the moon as it prepares to entire its wide, looping orbit.