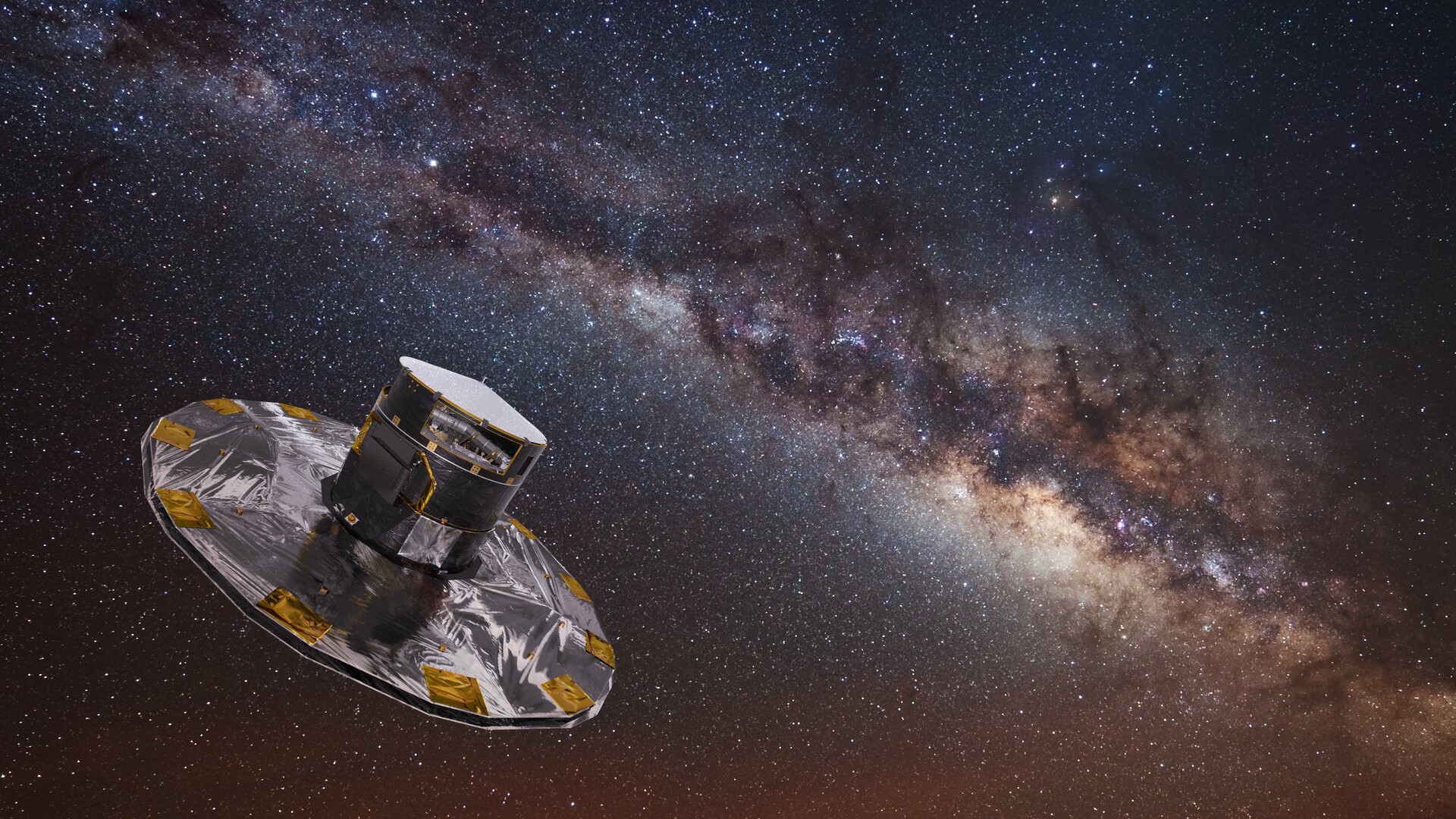 The Milky Way-mapping satellite Gaia has released its third catalog of data, which includes 10 times more information regarding asteroids compared with its second data catalog, indicating a rise in the number of “close encounters” between Gaia-tracked space rocks.

These close encounters can be used to assess a number of characteristics of asteroids, particularly their masses.

The third Gaia catalog also improves on its predecessors by including spectral observations of asteroids for the first time. The release contains the spectra, or measurements of the asteroids’ color and brightness at different wavelengths, of around 60,000 asteroids.

Related: How the bluest asteroid in the solar system got its color

These spectra can be used to determine the composition of asteroids that consist of unspoiled material left over from the formation of the planets around 4.6 billion years ago.

Currently, astronomers have the spectra of just a few thousand asteroids, and scientists at the University of Helsinki in Finland predict that Gaia could increase this number tenfold. This means that Gaia data could help astronomers better understand the solar system and its evolution.

The Gaia data also show that while the flying-saucer-shaped satellite has made a splash delivering data on distant stars and exoplanets within the Milky Way, Gaia is more than capable of influencing science much closer to home.

The Gaia mission differs from the Hubble Space Telescope and the James Webb Space Telescope in that, rather than selecting an object or group of objects and studying them intensely, Gaia charts the entire sky, making repeated observations.

This method allows Gaia to target billions of stars and observe how their positions change over time. Because these stars are so distant, the movements the spacecraft sees are minuscule. But when Gaia spots a faint light source moving so quickly across the spacecraft’s field of view that the object is spotted in only one image before vanishing,   this indicates a body much closer to Earth.

Checking these bodies against databases of known solar system bodies allows researchers to determine if the objects are previously discovered asteroids, and this cross-checking method often turns up new discoveries.

The asteroid Lutetia, one of the asteroids Gaia astrometry has been used to investigate, as seen by the Rosetta mission. (Image credit: ESA 2010 MPS for OSIRIS Team MPS/UPD/LAM/IAA/RSSD/INTA/UPM/DASP /IDA)

“When we observe an asteroid, we look at its motion relative to the background stars to determine its trajectory and predict where it will be in the future,” Marco Micheli, a scientist at the European Space Agency’s (ESA) Near-Earth Objects Coordination Centre, said in a statement (opens in new tab). “This means that the more accurately we know the positions of the stars, the more reliably we can determine the orbit of an asteroid passing in front of them.”

Gaia uses a technique called astrometry to calculate asteroids’ masses. This method  —  which dates back to 190 B.C., when it was used by Greek astronomer Hipparchus to create star catalogs  —  uses the precise motions of celestial bodies to build detailed databases of such objects, including asteroids.

Astrometry conducted by Gaia differs from the conventional computation of an asteroid’s orbit that assumes the object to be point-like without a specific shape, thus does not factor in size, rotation, surface-light-scattering properties, and the actual real-life shape of the asteroid.

Because of Gaia’s impressive accuracy, the astrometry it conducts depends on the angle at which an asteroid’s center of mass is offset from the center of the area on the body that is illuminated by the sun. This offset has been determined for the asteroid (21) Lutetia, which ESA’s Rosetta mission studied intensely in 2010.

Taking Rosetta data and physical information collected by ground-based telescopes allowed Gaia to remove systematic errors and derive a rotation period, rotational pole orientation and detailed shape model for Lutetia. By doing this for Lutetia and other asteroids, Gaia astrometry can help gather detailed physical information that researchers can subsequently use to make more detailed observations and delve into the solar system’s origins and evolution.

“There are so many revolutionary advances that it is difficult to pinpoint a single most significant advance,” Karri Muinonen, a professor at the University of Helsinki, said in a statement. “Based on Gaia DR3 [data release 3], Finnish researchers will change the conception of asteroids in our solar system.”

A full overview of the Gaia data is available from ESA (opens in new tab).