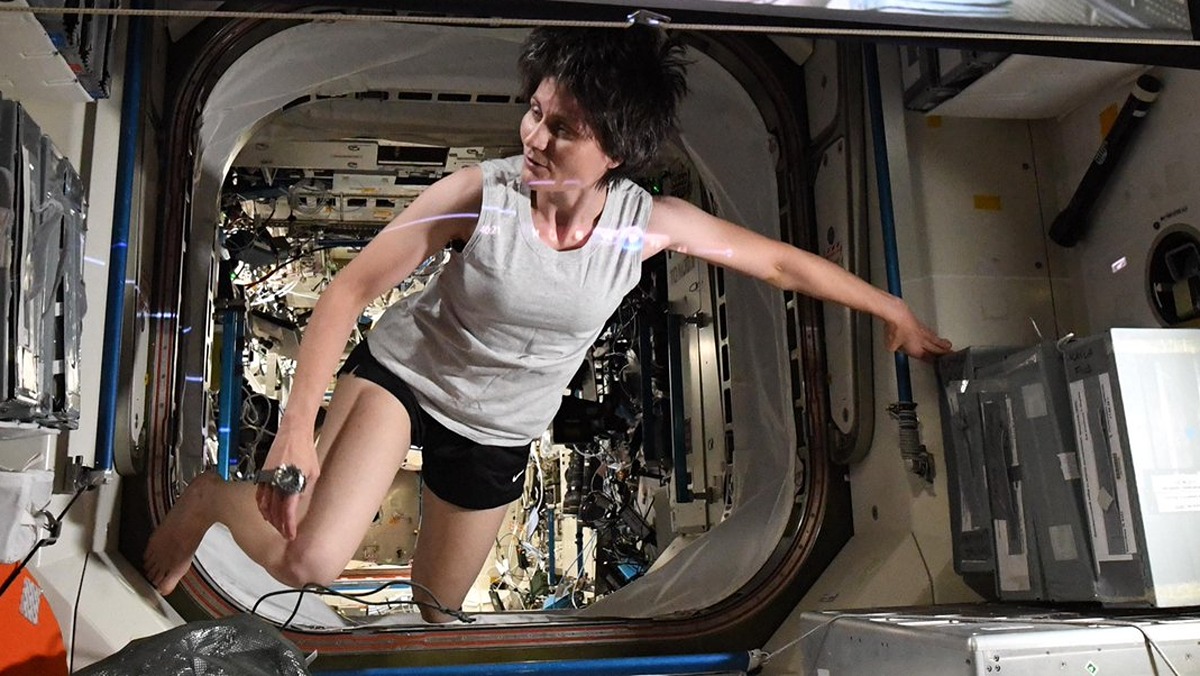 The only flaw in this cosplay is the hair, joked European astronaut Samantha Cristoforetti.

The Italian astronaut posed on the International Space Station in just about the same way as Sandra Bullock, who visited the orbiting complex fictionally in the 2013 movie “Gravity.” Cristoforetti wore a similar outfit to Bullock, who played fictional NASA astronaut Ryan Stone in a rousing adventure sparked by a cloud of space debris that struck Stone’s space shuttle on-screen.

“Hey, Dr. Stone! Quick question for you. How did you get your hair to stay put? #AskingForAFriend,” Cristoforetti said in her tweet (opens in new tab) with the image, posted June 19 following a screening of the science fiction adventure on the ISS.

This was the first attempt to capture Samantha Cristoforetti during a showing of the movie “Gravity” on the International Space Station, in 2015. As you can see, Cristoforetti is completely missing from the picture. (Image credit: Scott Kelly/NASA)

Her cosplay was so complex, in fact, that it took at least seven years to accomplish, as fellow astronaut Scott Kelly, formerly of NASA, shared on Twitter. Kelly attempted to take a shot of Cristoforetti doing the same pose during his one-year mission in 2014-15, but lost the chance due to a timing fluke.

“Here’s the original photo fail,” Kelly wrote on Twitter (opens in new tab) with the undated attempt sometime during his mission, which perfectly shows Bullock on-screen — but is completely missing Cristoforetti.

He called the “fail” one of the biggest regrets of his last mission in space, noting that he waited too late to grab the camera after Cristoforetti floated by in workout clothes, presumably on the way to do something else. (Astronauts have very tight schedules in space to make the most of their time there, although NASA does give them time off for mental health reasons.)

“So disappointed then, but all is good now. Thank you, Samantha,” Kelly said June 19. (Happily, Cristoforetti did accomplish another great cosplay during that period as a “Star Trek” astronaut, however.)

The long gap between spaceflight opportunities is not unusual. ISS astronauts require about two to 2.5 years of mission training before launching for a long-duration mission, which typically lasts about six months. It also takes roughly one day of time on Earth to recover for each day in space.

These timelines together mean that at best, it might be a 3 to 3.5 year gap in between individual missions for an astronaut. That number doesn’t, however, take into account the limited number of seats on available spacecraft to bring people to orbit, which can reduce flight opportunities.

Astronaut flight frequency also depends on how much their origin space agency contributes to the ISS agreement; luckily for Cristoforetti, the European Space Agency (ESA) is among the largest contributors after NASA and Russia.

Cristoforetti also took some time in between space visits to command a nearly two-week underwater mission known as NEEMO (NASA Extreme Environment Mission Operations) 23 in June 2019, which required its own training cycle and recovery.

Given all of these factors, Cristoforetti’s return to space as a part of Expedition 67 (which is ongoing) happened seven years after completing her first, nearly 200-day space sojourn in 2014-15 with Expeditions 42 and 43.