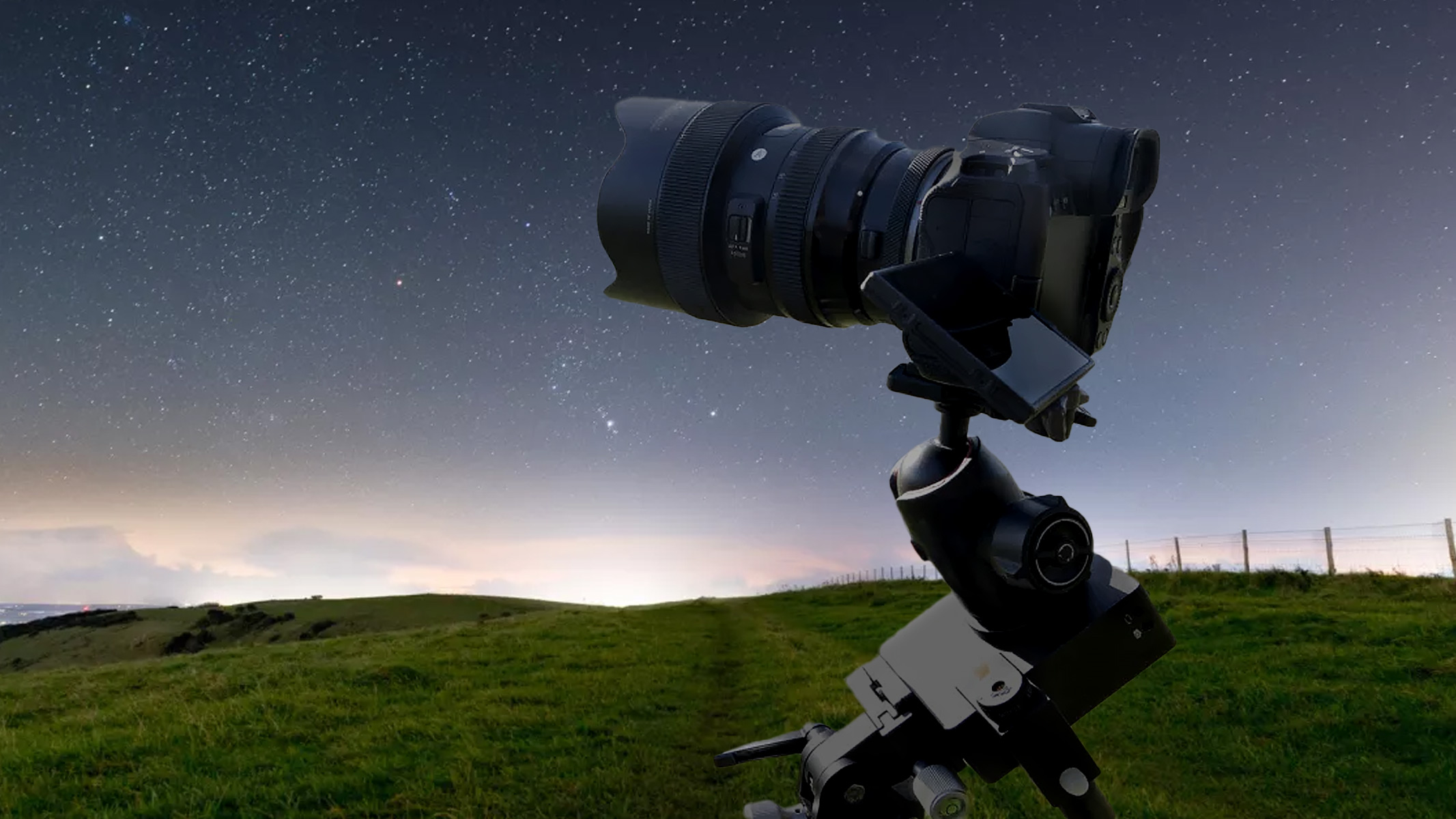 The best star trackers for astrophotography have changed the scene forever by counteracting the rotation of our planet. Until only a few years ago a long exposure of over about 10 seconds caused stars to blur. That made it very difficult to extract much data from deep-sky objects such as nebulae, but also from the Milky Way. Cue the invention of the star-tracker, which is basically a shrunken equatorial mount, but designed for cameras instead of telescopes.

Like an equatorial mount, a star tracker needs to be aligned (often with the help of a smartphone app) with the north celestial pole (the star Polaris) in the northern hemisphere or the south celestial pole in the southern hemisphere. It then keeps your camera in sync with Earth’s rotation. That way it counteracts the rotation of the Earth and keeps the target object still in a composition, thus allowing blur-free long exposures.

The best star trackers for astrophotography 2022

While most star trackers are a compromise between their own weight and their payload, the Benro Polaris is both super lightweight (at 3.3lbs / 1.5kg) and super-supportive, taking a mighty 15lbs/7kg of gear (the highest carrying capacity of any star tracker mount so far). It achieves that by using precise high torque motors and a waterproof IPX6 rating. That helps explain the very high price. It’s the first star tracker to offer built-in DSLR control and a built-in micro SD card slot. Remarkably, the Benro Polaris can even be controlled via the cellphone network. Its huge 2500 mAh battery can be recharged via USB-C while alignment is via any objects from a choice presented on a smartphone app. However advanced the best star trackers appear, there’s evidence from this electric tripod head that their days are numbered.

Best star tracker for photographers whose kit is up to 3kg

The incessant creep of light pollution means it’s now almost inevitable that you’ll need to travel to find the darkest night skies possible. Even if you don’t travel internationally, finding dark skies often means hiking into backcountry areas away from other humans. That necessitates a star tracker that strikes the right balance between its own weight and what it can support.

Cue the Sky-Watcher Star Adventurer Mini, affectionately known as SAM, which can take a payload of 3kg yet it is relatively easy to squeeze into a camera bag. It’s not the sleekest device ever, and nor is its SA Console app up to much. However, as we found during our Sky-Watcher Star Adventurer Mini review, once you get used to its foibles SAM is reliable and relatively easy to use. It’s possible to get accurate long-exposure images of up to about four minutes, which makes SAM a great compromise product. Accessories include a counterweight and declination bracket to increase the payload.

The priciest and one of the best star trackers around for astrophotographers is the iOptron SkyGuider Pro. Many star trackers are made for landscape photographers wanting to save on weight when out in the field searching for wide-angle compositions that include the night sky. But there are plenty of astrophotographers that only want to use telephoto lenses to capture light from distant deep sky objects. That means bigger payloads and longer exposures, which is what the iOptron SkyGuider Pro is designed for.

Able to take about 11lbs / 5kg, it can support long lenses or even a small telescope, making this a product that in some ways behaves more like a motorized equatorial mount, though its wedge lacks a little precision. Another downside is its use of a counterweight to reach that higher capacity than average, which adds a further 3lbs/1.35kg to the product. Aligning using its electronic polar finderscope and iOptron Polar Scope app, like most of its rivals this star trackers also tracks the Sun, Moon and allows 1/2-speed motion time lapses at night.

Only accurate for a few minutes

Even smaller and more nimble than the SAM is the great value Move Shoot Move, a star tracker that’s suitable only for wide-angle lenses. That’s partly because of its limited payload of 6.6lbs / 3kg and partly, as we discovered in our Move Shoot Move star tracker review, because it’s just not the most accurate star tracker around.

While that might sound like a deal-breaker, it’s actually a plus if you intend only to take wide-angle images of the Milky Way and starfields. For such photos a rough alignment with Polaris is all you need, something that can be done easily and quickly using an included green laser pointer.

The Move Shoot Move isn’t going to accurately track Polaris for more than about two or three minutes (though the wider and lighter your lens the longer it will remain accurate enough). But if you have a reasonably fast wide-angle lens none of that is going to matter much. If you have a telephoto lens though, look elsewhere.

Best star tracker for travel thanks to its lightweight design

Polar scope is easy to lose

While iOptron’s SkyGuider Pro is aimed at deep sky photography, the pared-down and more compact iOptron SkyTracker Pro is aimed more at wide-angle nightscapes. Its payload capacity, at 6.6lbs/3kg, is a lot less than its stablemate and at 2.5lbs/1.1kg it also weighs less. As such it’s more suitable for those wanting to carry a star tracker in their camera bag during trips and travel.

It has a wider appeal than just nightscapes since in addition to tracking objects in the night sky it can also follow the Sun, Moon and has a half speed for motion timelapses. As a bonus, its internal battery can run for 24 hours. Accessories include a counterweight and declination bracket to increase the payload.

The Vixen Polarie isn’t for deep-sky astrophotography. In the world of star trackers, it’s always a trade-off between size and versatility, and the Polaris compact size means it can support a payload of just 2kg. Therefore, it is best used with not only wide-angle lenses but fairly lightweight models, though using a mirrorless camera body will give you more flexibility. Alignment is via a supplied compass, a built-in latitude meter and a polar sight hole, so you will have to know how to find Polaris and/or the south celestial pole.

On hand to help are both red light illumination and the Vixen PF-L Assist app for smartphones. As well as long exposure astrophotography the Polaris can track the Moon and the Sun (the latter useful for solar eclipses) and its half-speed allows motion time-lapses at night. Its short two-hour battery life can be augmented by instead attaching a portable battery to its micro USB slot. Optional accessories include a counterweight to boost the payload to 6.5kg, a polar axis scope and a time-lapse adapter.

Best star trackers for astrophotography 2022: What to look for

However, star trackers — which sit between a tripod and a camera — are not all the same. They have varying weights and designs but also manage different payloads. While some are ideal for telephoto lenses pointed at specific targets, others can only handle wide-angle lenses for capturing the Milky Way. Both the maximum payload and the accuracy of star trackers vary. They are often fiddly and time-consuming, but at their best star trackers can deliver addictively good images.

As well as weighing your camera body and lens before making a purchase do remember to take into account the added weight of a couple of ball-head mounts and the load-bearing ability of your tripod. If in doubt, go for bigger capacity mounts because as a rule of thumb it’s best to have your rig’s total weight about half the capacity of the mount.

Here’s everything you need to know about the best star trackers available for astrophotography and night-scape photography.

How we test the best star trackers for astrophotography

In order to guarantee you’re getting honest, up-to-date recommendations on the best star trackers for astrophotography to buy here at Space.com we make sure to put every star tracker through a rigorous review to fully test each instrument. Each star tracker is reviewed based on a multitude of aspects, from its construction and design, to how well it functions as an imaging instrument and its performance in the field.

Each star tracker is carefully tested by either our expert staff or knowledgeable freelance contributors who know their subject areas in depth. This ensures fair reviewing is backed by personal, hands-on experience with each star tracker and is judged based on its price point, class and destined use.

We look at how easy it is to set up, whether the star tracker mounts are reliable and quiet if a star tracker comes with appropriate accessories and also make suggestions if a particular star tracker would benefit from any additional kit to give you the best astrophotography experience possible.

With complete editorial independence, Space.com are here to ensure you get the best buying advice on telescopes, whether you should purchase an instrument or not, making our buying guides and reviews reliable and transparent.

Round up of today’s best deals

« What is crypto copy trading and how does it work? » 3 Bizarrely Satisfying Objects!! 🤤 #Shorts