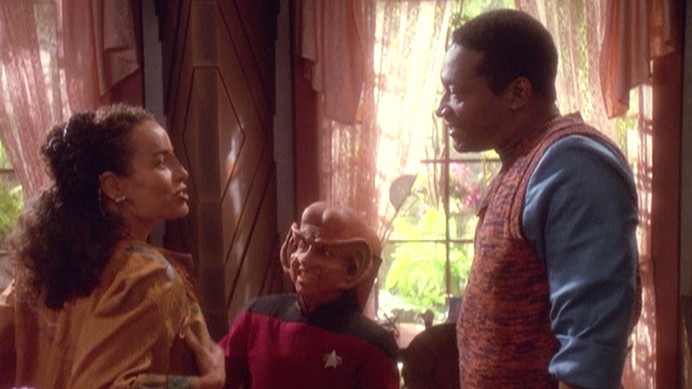 Ranking the best Star Trek: Deep Space Nine episodes is no easy task considering there were 176 of them spread over seven seasons. Premiering in 1993 and ending in 1999, Deep Space Nine (DS9) warped into new territory for Trek. Set mostly on a space station rather than a starship, DS9 was grittier than The Next Generation (TNG) and more grounded than Voyager. We saw the first black lead in the commanding presence of Avery Brooks, and delved deeper into the affairs of the Bajorans, Cardassians, and Ferengi.

Although a slower burn than its predecessors and successors, DS9 eventually crackled into some seriously ambitious story arcs. Like other Treks, the early seasons could be sketchy, but those who invested in the longer-form sequences were handsomely rewarded.

Situated next to a wormhole, and Bajor, which was occupied by the Cardassians, the show’s writers handled vast themes and complicated plots. War with The Dominion led to deeply atmospheric high stakes and moral ambivalence. DS9 was political, emotional, and innovative, but as always it was strong characters who anchored these stories.

The likes of Odo (Rene Auberjonois), Dax, and Kira (Nana Visitor) were complex personalities. There was the wily and engaging Garak (Andrew Robinson) and charming Bashir (Alexander Siddig). While TNG fans got to see other sides to Chief O’Brien and Worf. Commander, and later Captain, Sisko held it together with a thinking man’s masculinity that was neatly foiled by “old man” Jadzia (Terry Farrell).

It was a difficult choice to whittle down the contenders, but this list of the best Star Trek: Deep Space Nine episodes should provide some insight into what made this show such a special and layered entry in Star Trek canon.

Deep Space Nine’s pilot opens during a pivotal confrontation in Federation history, against the Borg in the Battle of Wolf 359. Aboard the U.S.S. Saratoga we see Lt. Commander Benjamin Sisko face overwhelming odds, and the death of his beloved wife Jennifer. Three years later, Sisko, now a commander, has to face the man who led the Borg attack: Captain Picard, who’d been assimilated and become Locutus.

It’s a tense meeting, with Sisko barely hiding his disdain while Picard is equally tough. It’s a faceoff worthy of Pacino and De Niro in Heat in the Trek canon, and well worth rewatching.

Emissary is an episode full of incident: involving gambling, special orbs, subterfuge, politics, and non-corporeal aliens, to name a few, and benefits from a snappy script and charming introductions to the main cast. In Sisko’s interactions with the wormhole aliens, Emissary also features some unexpectedly deep wisdom, and holds up as one of  Star Trek’s best episodes.

Chief O’Brien (Colm Meaney) was introduced in The Next Generation, but had a much more substantial role in Deep Space Nine. Catching up with Miles and his family was often a treat, while the chief’s dependably solid demeanor was put through the wringer on many occasions.

In Whispers, we have a mystery, as O’Brien returns to the station from an away mission only to find his crewmates, and his wife Keiko (Rosalind Chao), behaving oddly. Things are not quite right and the episode steadily builds the eeriness until an emotional and unexpected ending.

8. Improbable Cause & The Die is Cast

The wily and unctuous Cardassian known as Garak is one of Star Trek’s most compelling characters. Posing as a humble yet charismatic tailor, the façade belies a supremely subtle intelligence. In this two-parter Odo plays detective as a bomb detonates in Garak’s shop.

Uncovering a plot, tables turn as we learn more about Garak’s connections and start to see the limits of his charm and how his persona might’ve been developed as a survival tactic. It’s also notable for an intense interrogation culminating in hard-to-watch scenes as Garak is forced to commit torture.

This episode hones in on the atrocious realities of war as the U.S.S. Defiant makes a supply run to the barren planet AR-558. Beaming down to a heavily depleted Starfleet garrison, with morale low as the troops have been assailed for months, Sisko decides to stay and help these desperate souls.

The Siege of AR-558 does not shy away from the dread and grimness of combat and war, bringing the camera close rather than zooming far out to space. Pair this with the follow-up It’s Only a Paper Moon (season 7, episode 10) that focuses on the PTSD one of the DS9 crew suffers from the siege.

6. The Way of the Warrior

This double-length episode that opens season four is an example of DS9 at its best. Exploring the political machinations of the Klingons as paranoia runs riot since the shapeshifters are infiltrating the ranks of their foes, the fearsome species is seemingly looking to revert to their old ways of warring and conquering.

Starfleet turns to its favorite Klingon to find out exactly what’s going on: Worf (Michael Dorn). This episode is also notable for a wonderfully sly scene where Sisko finds a Garak-shaped way of informing the Cardassians of a Klingon invasion.

This is one of the most beloved episodes in the entire Star Trek canon, and why? Three words: James Tiberius Kirk. Several of DS9’s officers on the Defiant are thrown back in time and encounter none other than the NCC-1701 Constitution-class U.S.S. Enterprise. A Klingon wants to assassinate Kirk and it’s up to Sisko and crew to foil his plot.

This episode was conceived as a tribute to the original series and is one of the most lavishly budgeted of the entire series. And it shows. From the sets to the throwback costumes Jadzia and Sisko have to don, this is a detailed recreation of that era. The episode was also a welcome change in tone, full of humor and plenty of Easter eggs and callbacks to keep Trekkies busy.

Watch as tribbles invade the Enterprise and the DS9 crew seamlessly interact with Kirk and his crew. It’s a thrill too when Worf remarks on the ridgeless Klingons of this era’s Trek, a discrepancy that was later explained via Archer’s Enterprise.

Star Trek fans may have gotten used to story arcs, but they used to be somewhat rare. They involved the Borg in TNG, but Deep Space Nine really paved the way, taking the series into more serialized form. Season six of DS9 followed the war with the Dominion, and Sacrifice of Angels culminated a six-episode arc that is as exciting and dramatic as anything Trek has attempted before or since.

Sisko makes bold decisions as he seeks to wrest influence from the Dominion while viewers can enjoy some of the biggest space fights in the series. But away from the pyrotechnics, it’s the more profound and philosophical moments that really make this shine.

3. Far Beyond The Stars

Out of nowhere, this episode materialized to become one of DS9’s most memorable and deeply felt. It focuses on Benjamin Sisko, except he’s having a vision, and suddenly we’re transported to 1950s New York and Sisko has become Benny Russell, a writer for science fiction magazine Incredible Tales. Inspired by a drawing, Russell pens an inspired story about a space station and its black captain. But since it’s mid-twentieth century America, Russell’s boss, the editor, says it’s not believable to have a black captain.

Featuring the regular DS9 cast, it’s a treat to see the likes of Quark (Armin Shimmerman), Odo, and Worf as regular New Yorkers. But Far Beyond The Stars stands out for a towering performance from Avery Brooks as a writer who dares to dream but who is stricken by the racism of this time period. It’s an unfortunate fact that this episode still resonates in the twenty-first century, but, as the end suggests, it’s possible to still dream of a more utopian future.

Using a science fiction trope of being lost to time and space, this episode reaches toward the universal. It achieves it in a brusque yet elegant script and a superb performance from Tony Todd as the older Jake (trivia: he also plays Worf’s brother Kurn in DS9 episode Sons of Mogh, and on TNG).

The Visitor finds Sisko trapped in subspace by a freak accident. His son, Jake, then proceeds to spend the rest of his life trying to bring his father back in this emotional tour de force. For those with fathers – whether absent, role model, or something in between – or are themselves fathers, this episode hits hard.

1. In the Pale Moonlight

While Caradassians are major antagonists, it’s the shapeshifters and The Dominion War that form the deeper structure of DS9 and often shape the most ambitious and morally complex plots. This particular episode reveals the extent to which Sisko and Starfleet are willing to cross moral boundaries to change the odds in their favor.

Avery Brooks and Andrew Robinson put in stellar performances as Sisko enlists Garak’s help to bring the Romulans into the war to assist the Federation, and we see just how far Sisko is willing to go to achieve that.

As Sisko notes in his log, “the road to hell is paved with good intentions. I laid the first stone…” In the Pale Moonlight shows how easily good men can turn to devilry and how each step on that road is marked by rationalizations; yet while you’d want Picard at the negotiating table it’s probably Sisko who you’d turn to to win a war.