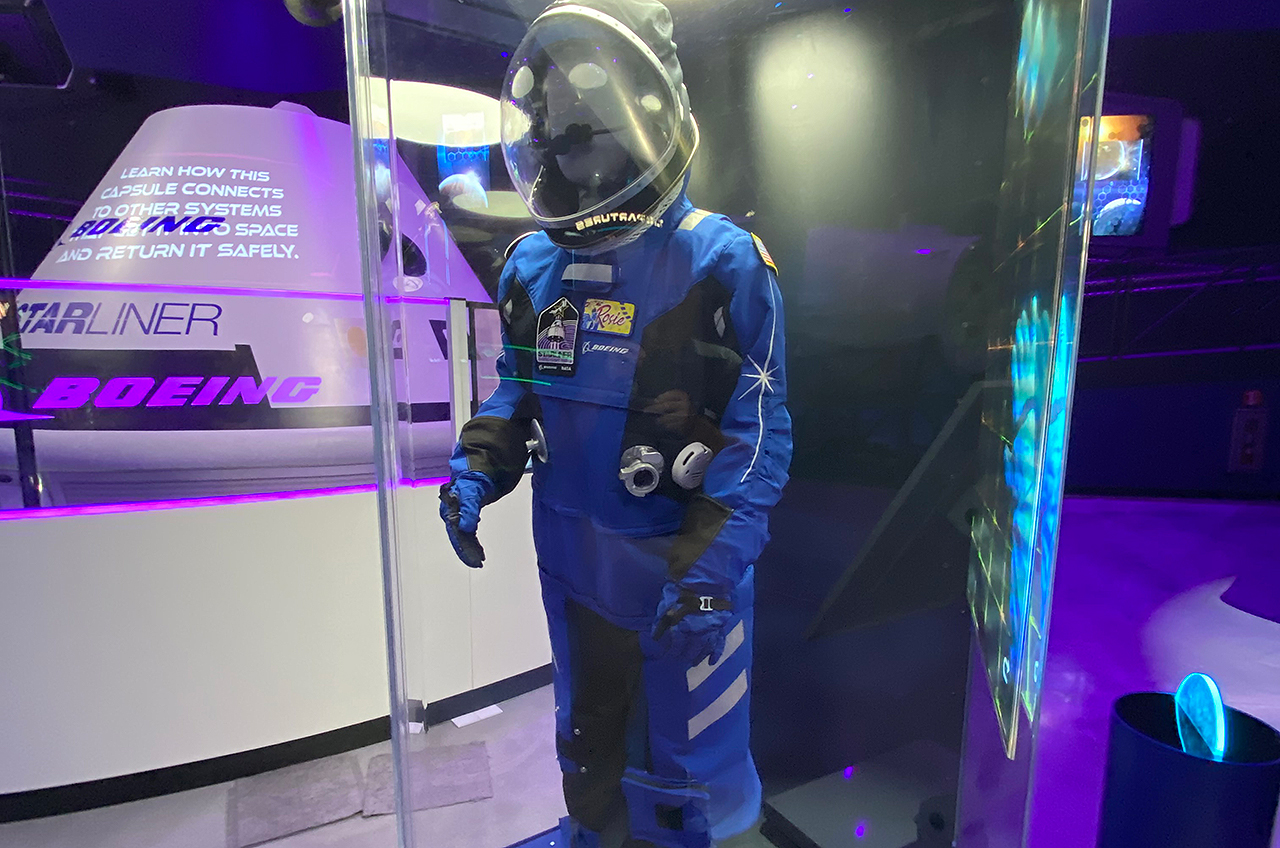 A never-before-seen spacesuit is making its debut with the public opening of a new NASA exhibit, but its reveal is not the only surprise about the Boeing CST-100 Starliner astronaut outfit.

It was also made by a Mythbuster (opens in new tab).

A replica of the second ascent and entry suit (AES) selected by Boeing for use aboard its new commercial crew spacecraft is now a part of “Gateway: The Deep Space Complex (opens in new tab),” a new attraction opening Wednesday (June 15) at NASA’s Kennedy Space Center Visitor Complex in Florida. The “Boeing Blue” garb was reproduced for the exhibit before any examples of the actual ILC Dover-designed spacesuit have been seen by the public.

“Within the realm of space and spacesuits, 100 percent, this is a first. I keep on describing my mood about it as ‘over the moon.’ which I realize is a little on the nose, but I am ecstatic about it,” said Adam Savage, who since co-hosting the Discovery Channel show “Mythbusters” has gained a reputation for fabricating highly detailed costumes of historic astronaut wear among his other projects at Tested.com (opens in new tab).

But this spacesuit has yet to make history. Announced late last month, Boeing’s choice of ILC Dover’s AES came somewhat out of the blue. The aerospace company had previously selected another spacesuit manufacturer (opens in new tab), the David Clark Company, to provide pressure garments for astronauts launching and landing on its CST-100 Starliner capsules.

An example of the David Clark suit, which was first revealed in 2017, has already flown twice to space on Boeing’s two orbital flight tests (opens in new tab). Although astronauts have yet to fly on the Starliner, an anthropometric test device (instrumented mannequin) named “Rosie the Rocketeer” was dressed in the suit for the trial missions.

Boeing has picked two companies to make launch and entry suits for astronauts who fly on its Starliner capsule. At left is ILC Dover’s Ascent and Entry Suit; at right is a suit made by the David Clark Company. Both of suits pictured are qualification units. (Image credit: Boeing/composite by collectSPACE.com)

Boeing’s next and, as currently planned, final Starliner test flight will carry a crew, who will also wear the David Clark suit, according to a statement released by the company. The ILC AES will be introduced once Boeing begins flying astronauts on NASA-contracted missions to and from the International Space Station in 2023.

“In the spirit of commercial human spaceflight, we made the decision to bring an additional Starliner spacesuit supplier online to introduce additional redundancy, flexibility and competition for crew accommodations on future flights to low-Earth orbit destinations. We expect to introduce the new suits during operational missions, and are pleased to see the market opening up and allowing more options for Boeing as well as our government and commercial customers,” read the company’s statement.

When Savage first got the call to replicate the Starliner suit, he thought he was going to reproduce the David Clark design.

“I made my bid based on the Boeing Starliner suits that had already been seen. While there’s quite a stark difference in the visual effect of the Starliner suits we’ve seen up until now and this one, there is luckily not a huge topological difference in terms of the effort it takes to make one, so my bid held,” Savage said in an interview with collectSPACE.com.

Related: The evolution of the spacesuit in pictures

ILC has a long history as a provider of extravehicular activity (EVA) spacesuits for NASA. The company made the garments worn by the Apollo astronauts on the moon and provided the soft goods for the suit still worn by International Space Station crew members when they conduct spacewalks outside the U.S. segment of the orbiting outpost. ILC and its partners were also just selected for a NASA contract to provide the next generation of spacesuits (opens in new tab) to be worn in low Earth orbit and on the moon.

With the rise of the commercial spaceflight industry, ILC took it upon itself to develop its own AES as an off-the-shelf solution.

“So when the opportunity came, we were able to make some tweaks to our commercial offering and just recreate our LEA [Launch, Entry, and Abort] suit (opens in new tab) to Boeing’s specifications and become a second supplier for them,” said Joey Sung, senior design engineer for ILC. “The major difference is essentially the flame retardant cover layer, as you will be able to see in the replica made of our suit.”

The integrated helmet that’s part of ILC Dover’s Ascent and Entry Suit for Boeing’s Starliner spacecraft features a faceplate that can be removed and replaced separately. (Image credit: Boeing)

ILC’s in-house fashion designers were able to meet Boeing’s needs. Savage and the small team he hired had to find a way to do the same with outside sources.

First and foremost was finding a material to match “Boeing Blue,” the company’s trademark hue that features heavily on the suit’s exterior and on the Starliner itself.

“I’m lucky enough here in San Francisco that there happens to be a giant fabric outlet about 600 feet [180 meters] from the front door of my shop,” said Savage. “We gathered a couple of samples from a couple of other places, but our favorite was from that place and we sent it to Boeing.”

The company gave its approval the next day.

“It never works out that easily,” said Savage, “but somehow it worked out that the color was absolutely spot on.”

Not your normal hardware store hardware

Next came recreating the details that give the suit its functionality and fashionable look. Neither ILC nor Boeing could provide a sample suit for Savage to reference, so instead, based on his direction, ILC sent him hundreds of photographs of every imaginable angle and feature of the garment.

“And they required me to destroy the photos when I was done building,” Savage told collectSPACE.

Without patterns to follow or hardware from which to cast molds, Savage had to rely on what the (short-lived) photos showed and what could be recognized in them. For example, one of the features of the ILC AES is its integrated helmet.

“The faceplate is removable and replaceable, so it is highly maintainable,” Sung said in an interview.

“What he’s referring to is this wonderful system in which instead of a neck ring or separate helmet, the visor is actually integral with the soft suit. You seal it by pulling a zipper that basically goes around your neck, effectively from one ear, down under your chin and up to the other ear,” said Savage. “When we were looking at the photos, we realized that it was the same industry-standard, sealable zipper that you can also find on a scuba diving dry suit.”

“So because I also have a bag manufacturing company — I make tool bags out of recycled sailcloth (opens in new tab) — I actually pinged my manufacturer and asked if he had a source for the 21-inch [53 centimeters] seals. He did, so we got the exact right pieces,” he said.

The visor is held into the suit using a pair of rings that resemble the shape of Pac-Man’s open mouth.

“I hired a wonderful aerospace 3D artist to draw that pair of frames for me so we were able to 3D print them exactly. And then luckily, because he works in aerospace, he recognized the specific type of aerospace industry screws that are used to hold that visor into the real suit. I think there are over 70 of them,” Savage said.

“So I got the real screws, and they have the markings on them and everything,” he said. “It was one of those things that deeply adds to the veracity of how the suit looks because there is a real difference between aerospace hardware and normal hardware store hardware.”

From head to toe

Not all parts were commercially available, though, in part because of the suit’s unique design. Savage was only able to find one component — a small adjustment knob — that he could reuse from an earlier build he did of NASA’s Advanced Crew Escape Suit (ACES) as was worn on the space shuttle.

The other hardware had to be made from scratch.

“The part that I had most fun with was the test connector for the umbilical because it is really different from any of the Apollo or later connectors that I am used to or have ever seen,” Savage said. “So that was actually a really fun dive, to look into the probably 30 or 40 photos I had of just that connector and replicating it.”

Some of the suit’s aesthetics also presented a challenge. Running down both arms are white star bursts that are simple in shape but required exact placement.

“Not only were there branding concerns, making sure that the graphics we were starting from were as tight as possible to match what Boeing wanted, but the embroidery down both arms is different,” said Savage. “So it was not just about getting the graphics right to get the embroidery right. It was also about embroidering it onto the fabric at the right bias because we were matching the bias on the original everywhere we could.”

“There were just a whole bunch of factors that all had to work in perfect concert with each other,” he said. “That was maybe one of the most difficult parts about replicating.”

Savage and his team strove for authenticity from head to toe, including the bottom of the integrated boots that by the nature of the display would be out of sight.

“Our boots are a removable component made with our partners at San Antonio Shoemakers,” Sung told collectSPACE of the actual ILC AES suit.

“That is one of the things we spent the most time [on] but that you can’t see,” Savage said. “I had pictures of that exact sole and how it wrapped around the integrated boot. We totally replicated the tread of the boot precisely.”

“I didn’t want to print it in a soft material simply because that is less archival, so I did a 3D print of it and sintered nylon and then used heat to gently adjust the sole so it looked a little more like a piece of soft material,” he said.

“I am so enamored and gobsmacked by what ILC Dover has done over the past several decades for American spaceflight that I just really wanted to do the best job I could,” Savage said. “One of the things that I love about getting to play in the rounds that I get to play in is I can see that the folks I’ve talked with at ILC are just so wonderfully house-proud of their work.”

“They are excited and obsessed with spacesuits in a way that I totally understand. So it’s lovely to share that,” he said.

“I would say it is a pretty accurate representation,” Sung said. “I think from that replica you can get a good idea of what our suit looks like.”

« FINRA may hire employees terminated from crypto firms: Report » Tron’s USDD Remains Below the $1 Parity for 24 Hours, Token Hits a Low at $0.95 per Unit