Building A Better Hunter By Going Hands-On With Wild Hearts

The easy line to draw from Wild Hearts–the upcoming hunting game from publishers EA and Koei Tecmo and developer Omega Force is Capcom’s Monster Hunter. Wild Hearts is a game about exploring large open areas, alone or with two other players, to take down gigantic monsters that move around the map as you fight them. And the developers don’t entirely shy away from that comparison–but they’re aspiring to do something much more than replicate Monster Hunter.

Speaking with Koei Tecmo’s directors, Kotaro Hirata and Takuto Edagawa through a translator, they acknowledged the relationship, saying, “When you’re making a hunting game, Monster Hunter is a huge presence in the genre, so we can’t say we drew on it for a strong inspiration, but it’s not like we didn’t know it was there while we were making our game.”

The comparison is appropriate as the games share many similarities, but developer Omega Force has explored the genre before with a few games in the Toukiden series. In those games, like in Monster Hunter and Wild Hearts, you hunt giant monsters to harvest them for material which can be used to upgrade your equipment. Despite that lineage in the genre, Omega Force is quick to say that Wild Hearts is not an extension of that world. “Unfortunately, there is no overlap. This is a completely new IP for us. We know that some of our fans were hoping it would have some overlap with Toukiden, but it doesn’t,” Hirata and Edagawa said. Wild Hearts and Toukiden exist in two separate universes, but Wild Hearts has allowed Omega Force to pick up where it left off in the genre in a big, well-funded way, while exploring an impressive crafting system called Karakuri that makes it stand apart.

Wild Hearts has been in development for four years and represents an unlikely partnership between EA and Koei Tecmo. The former is an American publisher known predominantly for its sports games and the latter is a Japanese publisher that has had success with Dynasty Warriors, the historical action series. Wild Hearts is being published under EA’s Originals label, which has birthed successful games like Unravel and 2021’s It Takes Two. Despite EA Originals so far doing a good job of embracing the word “original” and publishing games you wouldn’t normally expect to come from EA, it is still surprising to see the announcement of Wild Hearts.

Playing it is also surprising in some ways, and not at all surprising in others. We were given access to an early build that let us play through the opening and the first few major combat encounters. The non-surprising parts of the game will be familiar to anyone who has played a hunting game like Monster Hunter in recent years. Movement feels similar, as does the basic combat of the tutorials. The layout of the world, large and dense, distinct separated areas that can be accessed from the hub city, each housing a few different creatures, also feels familiar. The process of felling one of the giant creatures, referred to as Kemono in Wild Hearts, has a cadence I have experienced before, but there is plenty that gives the game a unique identity, the main one being the Karakuri system. 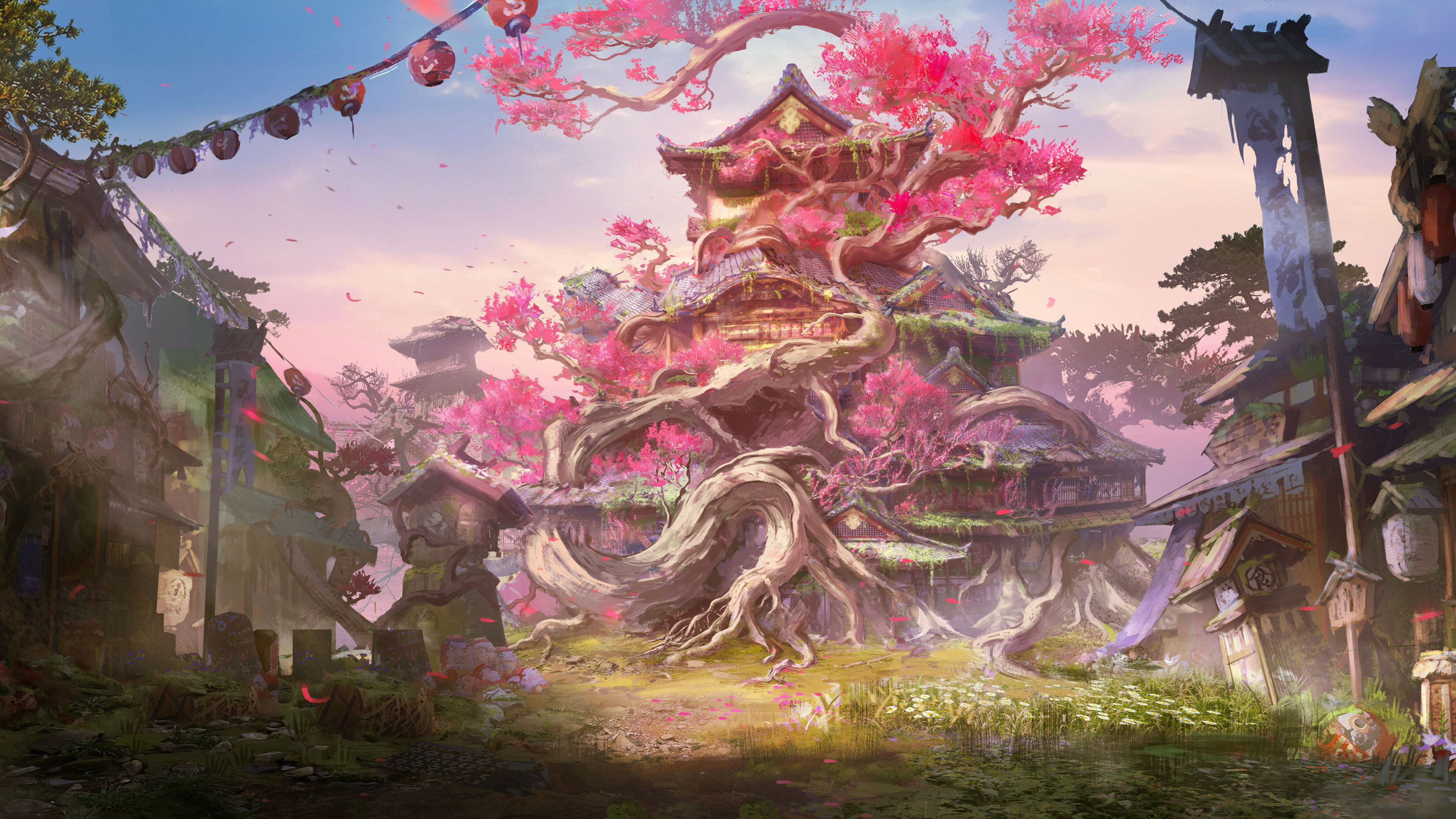 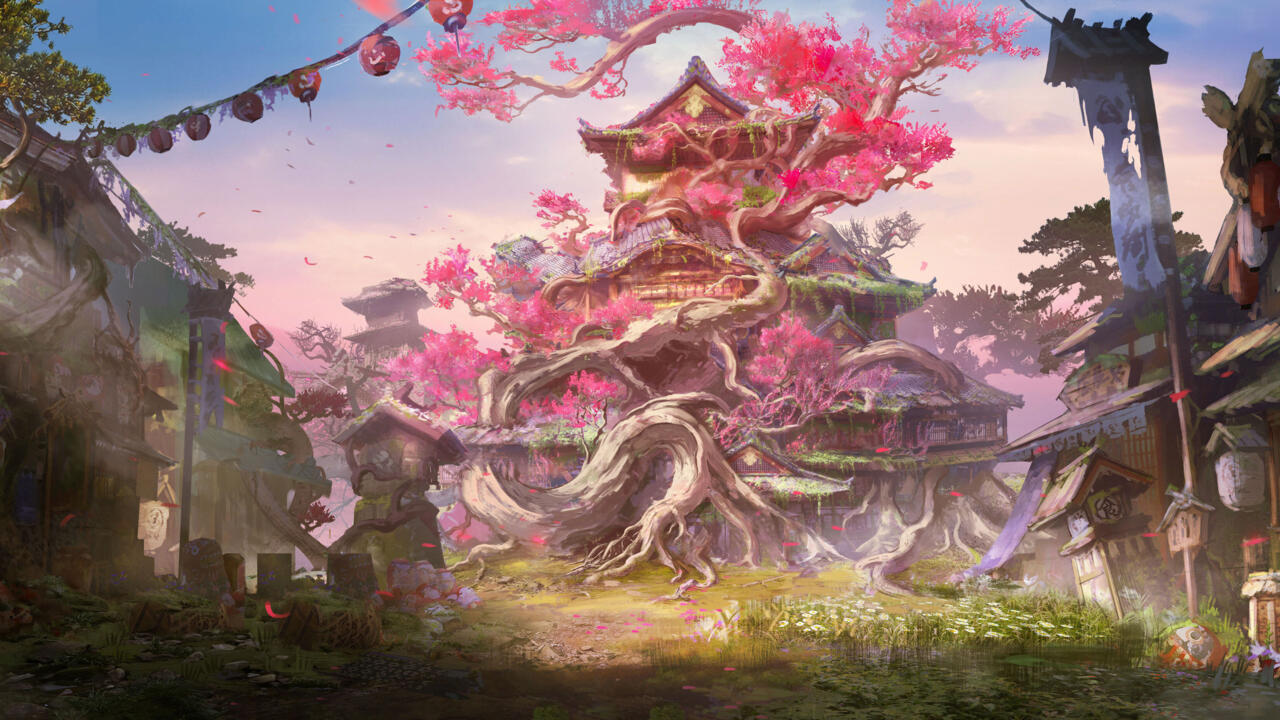 Karakuri is the crafting system, and in the fiction of Wild Hearts, it’s a type of magic that instantly produces impressive pieces of engineering you can use in fascinating ways. The first Karakuri you unlock is the ability to produce a box you can climb on top of that ejects you into the air. You can quickly generate multiple stacked boxes, scramble to the top, and leap. This is useful for exploring the environment, but it gets really fun when you’re fighting a Kemono. You can stack the boxes to get above your opponent and launch a devastating downward attack, use it to quickly get in the air to dodge an area-of-effect attack, or even create a barrier to slow down a rampaging Kemono. Creating these devices is fast, recalling an expert Fortnite builder, and even during my short time with the game, I unlocked a collection of interesting ones that were helpful both inside and outside of combat.

During my second Kemono encounter, I unlocked what I would best describe as a bounce pad that I used to both quickly fire me out of the way of incoming attacks, or shoot me toward the Kemono for added damage. After that fight, I unlocked gigantic rope arrows I could mount into the ground to shoot off into the distance to create ziplines to make traveling around the world faster and easier. Later game footage also showed walls to be used in combat, devices to let you glide from high heights, and more. The other nice thing about the Karakuri is they are permanent within your world, as are the Karakuri placed by other players participating in your game, which are usable by everyone.

Speaking with Hirata and Edagawa, crafting was an early idea the team wanted to integrate into Wild Hearts, and the first versions had you preparing the devices before heading out into the world, or finding them along the way and carrying them with you. Through iteration, though, they found it was much more fun to make the devices quickly in the middle of combat. Optimistically, the Karakuri system is the mechanic that will separate Wild Hearts from comparable hunting games, and I was impressed with how quickly I was able to integrate the devices into combat. 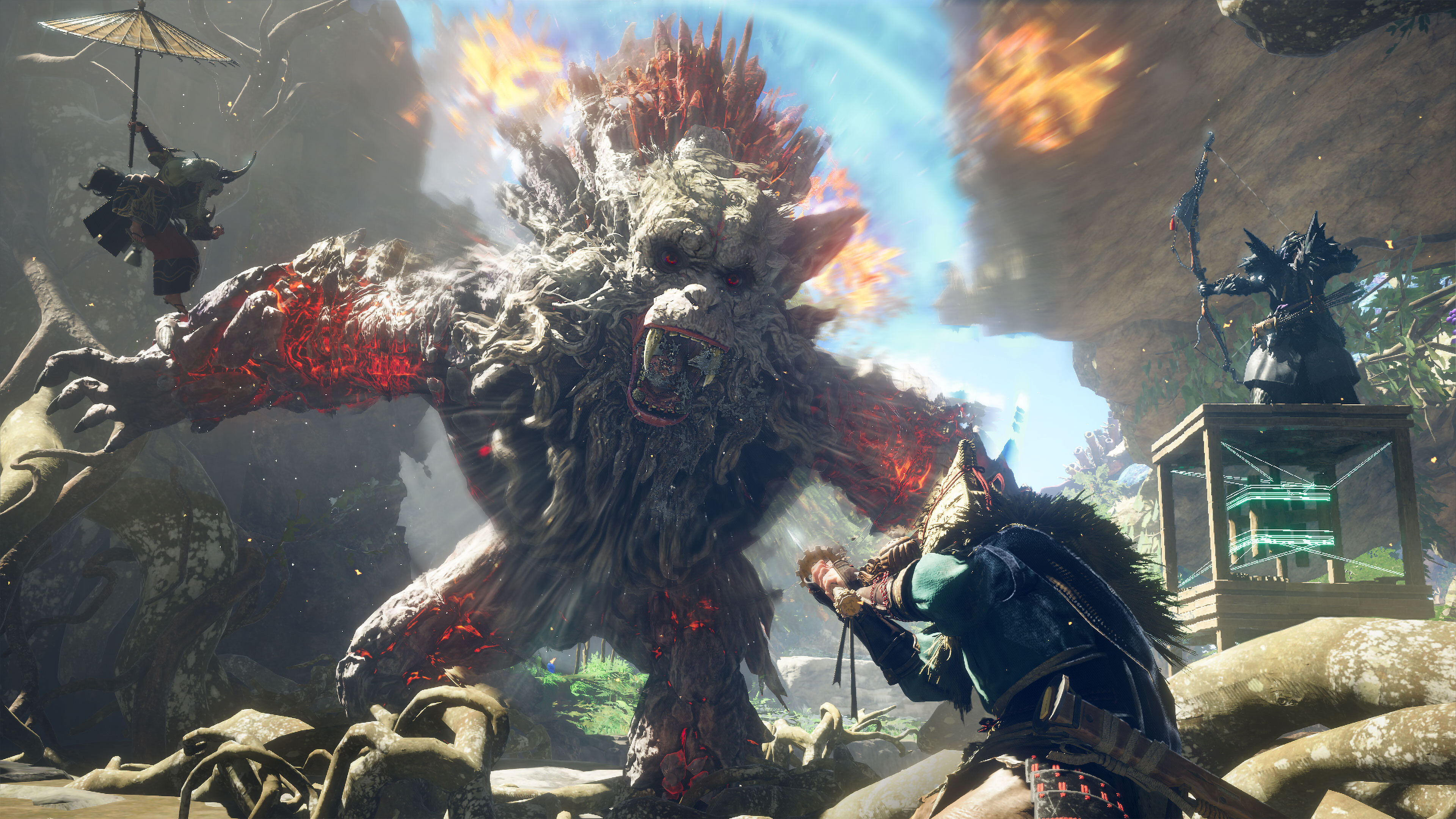 Wild Hearts’ other major distinguishing factor is the design of its Kemono. Omega Force’s stated goal for its creatures is they be a combination of animals and nature. The Kemono that have been shared, as well as the few I fought, had clear familiar animal roots, but are covered in things like tree roots and moss. “When we set out to design a hunting game, we wanted to have this kind of an impact on the field of play where the monster would erode the nature around them to create their shape and really break up the battlefield,” Hirata and Edagawa said. The Kemono look as though they could curl up in the forest and be confused for a giant overgrown rock, which makes them all the more intimidating when you wake them up and they start running in your direction.

During my combat with the Kemono I used a standard kitana and also unlocked an umbrella weapon that, when used correctly, allowed me to stay up in the air for short periods of time to float and dodge various attacks. There are six other weapons available in the game that will each have their own combo systems and finishing move animations.

When you defeat a Kemono, before the battle truly ends, you have the chance to deliver one final blow with a fancy animation. Doing this ends the battle and also instantly rewards you with all the spoils of victory. There is no need to stand over the corpse and manually collect your winnings. Hirata and Edagawa see this is a distinguishing factor of Wild Hearts, saying, “We wanted to distinguish ourselves from other hunting games, and so one of the ways we did that is if you’re putting your life on the line as a player trying to defeat this monster, we wanted the objects to automatically come to you at the end of the game.” 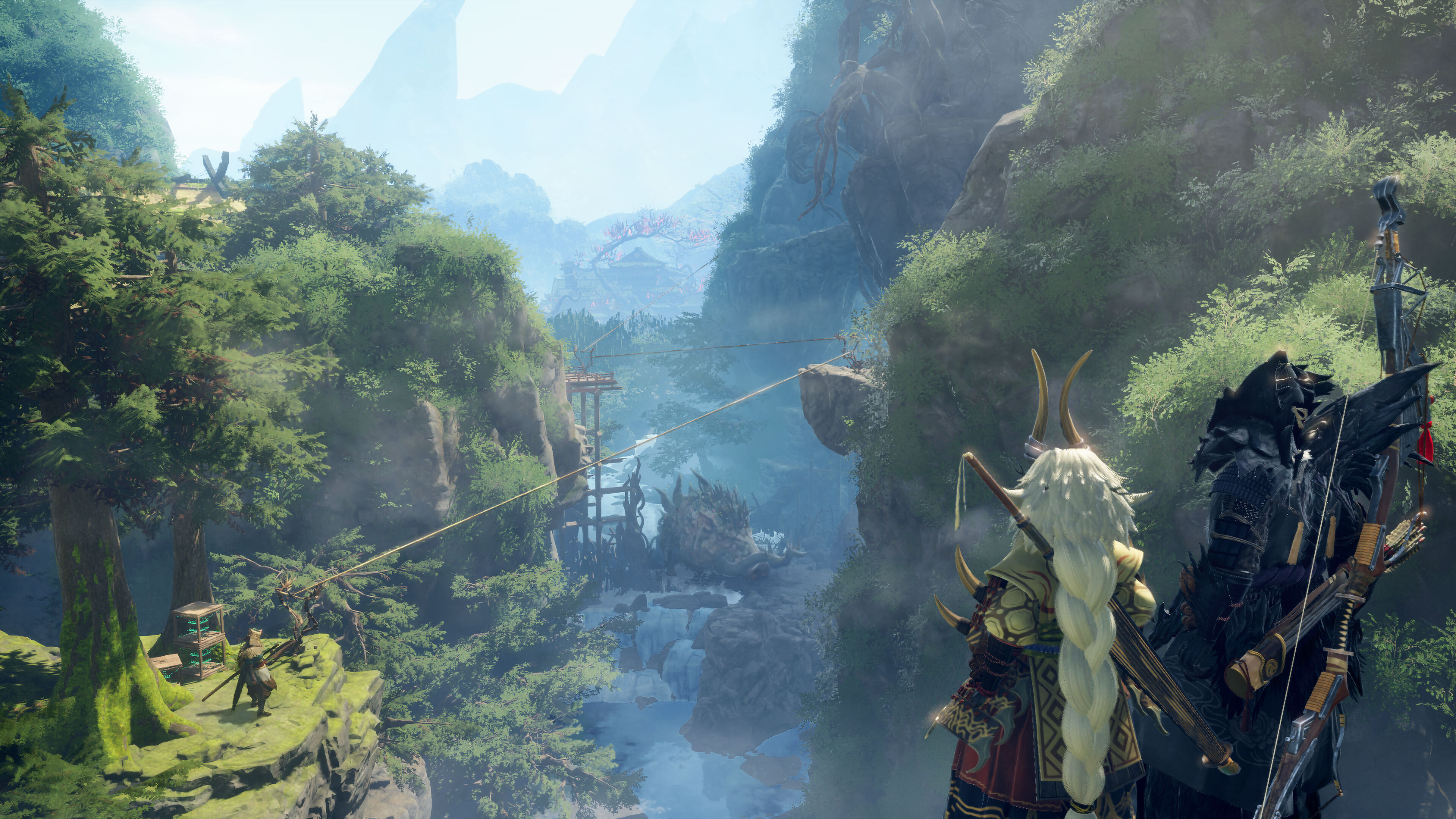 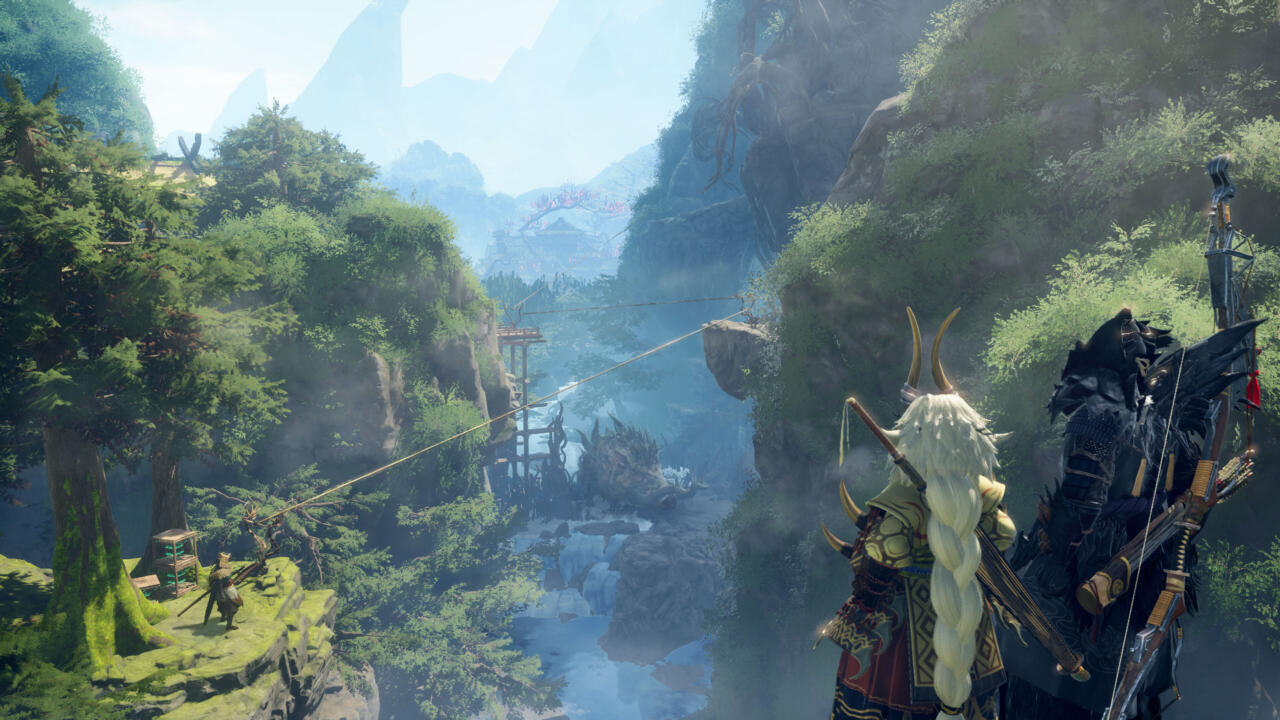 Some other smaller details we learned from our time with the game, and speaking with Hirata and Edagawa, is that Wild Hearts will feature an English dub (our demo was in Japanese), cooperative players will be able to drop into the middle of fights, and the main story campaign will take about 30 hours to complete, but there will be plenty of side quests to tackle, as well as post-game content that will extend the gameplay. Omega Force is also promising full cross-play support and teased some light farming mechanics.

Wild Hearts will feel familiar to fans of hunting games like Monster Hunter, but I walked away impressed with how big a swing this game is from Omega Force and EA. It doesn’t look or particularly play like any game the developer or publisher typically releases (outside of Toukiden), and I am excited to experiment more with the Karakuri system. It’s the mechanic that will help Wild Hearts stand out from the crowd and I enjoyed the process of scrambling up a stack of boxes I built, leaping off the top, and bringing down a powerful blow on a rampaging Kemono. I imagine I will be doing it a lot more with different Karakuri devices on February 17 of next year.