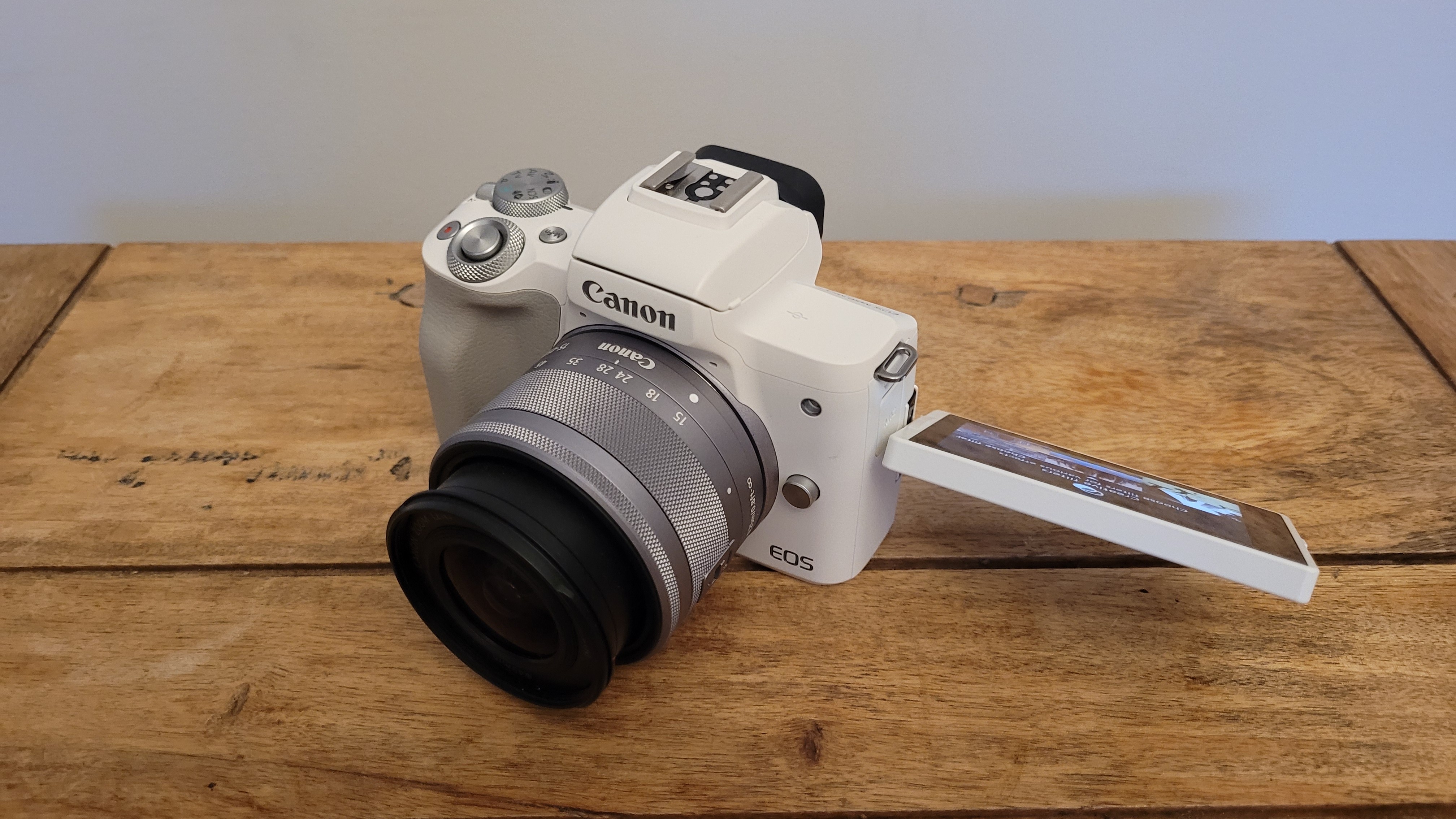 The Canon EOS M50 Mark II is a mirrorless 24.1-megapixel APS-C camera. It is a reasonably priced camera for beginners looking to upgrade from smartphones or bridge cameras, but even more so, it is designed to lure in the content creator crowd.

It shoots an impressive burst speed of 10FPS, double that of the similarly priced Canon EOS Rebel SL3 / 250D DSLR (also included in our list as one of the best beginner cameras) which makes it fast enough for wildlife and sporting action.

This is a camera you can slip into your pocket and whip out when the moment arises for you to capture a candid shot or record or live stream a vlog.

If you’re not social media savvy and aren’t too worried about the features designed for such use, see our roundup of the best mirrorless cameras for a body that might be more appropriate to your style of photography. Or, if you want a broader look at the best cameras for photos and videos we have that too. In this review, we’ve tested out the Canon EOS M50 Mark II for you so read on to see what we made of it.

The EOS M50 Mark II has a generous grip although the buttons on the back are a little close together for our liking. (Image credit: Tantse Walter)

As you can see from the photos, we tested out the white version of the Canon EOS M50 Mark II, it adds an extra gram to the weight of the product. Beautiful in this color, we deem it worthy of being ‘instagrammable’ in itself.

This camera is tiny, you certainly don’t need a designated ‘camera bag’ for taking it out and about as it can easily be slipped into a coat pocket. It isn’t weather sealed so you’d have to be mindful of this but in terms of portability and keeping your kit weight low, you can’t get much better than this.

It feels sturdy in the hand, but also quite delicate, likely due to its petite form factor. Although it seems small and light enough to let your child loose with, we’d suggest a neck strap to be on the safe side.

Despite it being elegant and petite, the M50 Mark II has a generous hand grip. We did find the buttons a little crowded, even when we tested it with little hands. Whilst we appreciate this is a tiny camera, and this is part of its appeal, those with bigger fingers might find the buttons a little too close for comfort. Saying that, all of the controls you might want to tweak are available via the touchscreen, so perhaps the buttons are redundant if you’re more used to touchscreens anyway.

As with SL3 / 250D, the 3.5mm microphone port is where we would expect it, on the left of the camera. However, the USB and mini-HDMI port are both on the right-hand side, which is usually where we’d hold the camera. This shouldn’t detract from the experience for content creators though, who would likely have the camera mounted on a tripod for the most part to shoot make-up tutorials or create DIY ‘how to’ videos. When out and about it’s unlikely you’ll need to make use of this port, either.

The 10FPS is an attractive feature of the M50 Mark II, a speed usually reserved for more expensive cameras and would allow photographers the opportunity to capture fast-moving subjects like wildlife, sport or automotive sports with clarity,

For content creators, theEOS M50 Mark II includes vertical video recording capabilities. This makes it easy to upload straight to social media platforms like TikTok and Instagram where a vertical format is preferred, without the need for post-filming editing. You can also stream live, straight to YouTube (providing you meet the subscriber requirements). There is also a press-to-record button on the touchscreen itself as well as a movie self-timer which gives you up to 10 seconds to get into position before it starts to record.

The images this camera produces are rich in color and show huge amounts of detail. Because there is no in-body image stabilization, you’d probably want a gimbal or a tripod if you want to use slow shutter speeds.

Like its predecessor (the M50), the M50 Mark II comes with a hefty 1.56x crop, enhanced to 1.75x if you turn on digital image stabilization and further enhanced to 2.26x if you used enhanced IS. This means you have to be careful with your lens choices, especially if you want to do handheld selfie-style vlogging. The 1080p video is still fantastic though and would meet most beginner needs.

There isn’t any weather sealing, so while it would make a great travel camera, you’d have to be mindful of taking it out in changeable weather or anywhere that dust ingress may become a problem.

The M50 Mark II has a fully articulating touchscreen (ideal for selfies) and is well suited to vertical shooting. (Image credit: Tantse Walter)

The ISO range of 100-25,600 is generous for shooting in low light and is especially handy for astrophotography. Again, when compared with the Canon EOS SL3 / 250D, the mirrorless M50 Mark II has the edge in terms of producing lower image noise, negating the need for post-editing in third-party software.

One disappointment with this camera is the relatively low battery life. Given its main audience is content creators, we’re surprised that after a full charge it can only handle 305 shots. The price comparable Fujifilm X-T 30 (opens in new tab) is rated at 380 shots and the Olympus OM-D E-M10 Mark IV (opens in new tab) sits at 360 shots. More expensive cameras like the Canon 6D Mark II are rated at 1200 shots.

Should you buy the Canon M50 Mark II

If you’re looking for a reliable and stylish travel-friendly camera that takes nice detailed photos then this could be a great option. Clearly more suited to content creators who want to take detailed stills and like the option of live streaming straight from the camera. If 4K video is your main reason for wanting a new camera then we’d suggest looking elsewhere, although the 1080p video is still fantastic if you don’t need to capture 4K. Being able to film vertically also saves editing time when prepping content for Instagram reels, stories or TikTok etc.

If this product isn’t for you

If you need uncropped 4K video, consider the Fujifilm X-T30 II which is a fabulous little camera with almost identical weight and similar specs. However, with the ability to shoot 4K, it will cost you a significant chunk more.

We also highly rate the Olympus OM-D E-M10  IV for versatility, though it is a Micro Four Thirds camera that captures 20MP stills. Or if size doesn’t bother you, you may want to consider the flexible Canon EOS Rebel SL3 / 250D which is technically the lightest DSLR in the world.