The Season 1 battle pass trailer gives a quick briefing on how the pass works as a multi-sector map, but basically, this combat map-style battle pass is divided into different sectors, ranging from A0 to A20. Sectors A1 to A20 are all connected to each other, and they each have one main item of interest called the High Value Target (HVT) and four additional items. The four standard items must be unlocked in a sector before the HVT can be unlocked.

Season 1 introduces Zosar “Zeus” Kalu, who is the new operator in the pass. Zeus is an instant unlock for anyone who purchases the premium battle pass. Unlocking Zeus is also bundled with a 10% battle pass boost, the Myth Maker SMG weapon blueprint, the Articulate Response sidearm weapon blueprint, and a gun screen, which is a new customization feature that allows players to attach a widget to their weapon, such as one that tells you the (real-world) time and date.

Found within sector A1 is the Orbiter weapon blueprint, which is a cosmetic variant of the Kastovia assault rifle. This is the HVT of the sector, and players must first unlock the four additional items, which are a calling card, a double weapon XP token, an emblem, and a weapon charm.

After getting an HVT item, the sector is complete and players are free to advance to any adjacent sector. For example, once players unlock the Orbiter blueprint, they can move on to sectors A2 and A3. 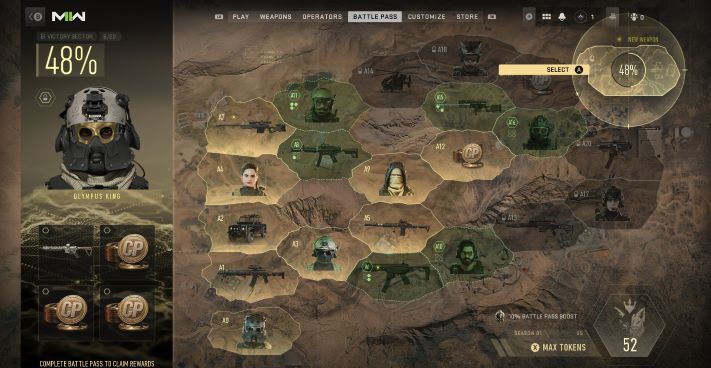 Players who reach 100% completion on the map by completing all sectors will gain access to the Victory Sector, which contains additional items to unlock. This includes the Olympus King operator skin for Zeus, Mortal’s Bane weapon blueprint, and 300 CoD Points.

The battle pass contains 1,400 total CoD Points. Players can earn 400 free CP within the pass, plus 1,000 more with premium pass and victory sector, allowing players to earn back the CoD Points spent purchasing the full pass.

Additionally, Call of Duty is introducing DLC based on the seven deadly sins. The first will be the Sloth bundle, which will be available for Modern Warfare 2 and Warzone 2.0. Old cosmetics from Warzone and past Call of Duty games will not be transferred over to Warzone 2.0, and only the Caldera map will remain available to players sticking with the original Warzone. Season 1 arrives November 16 with Warzone 2.0, and here are the Season 1 start times and details announced for both games.