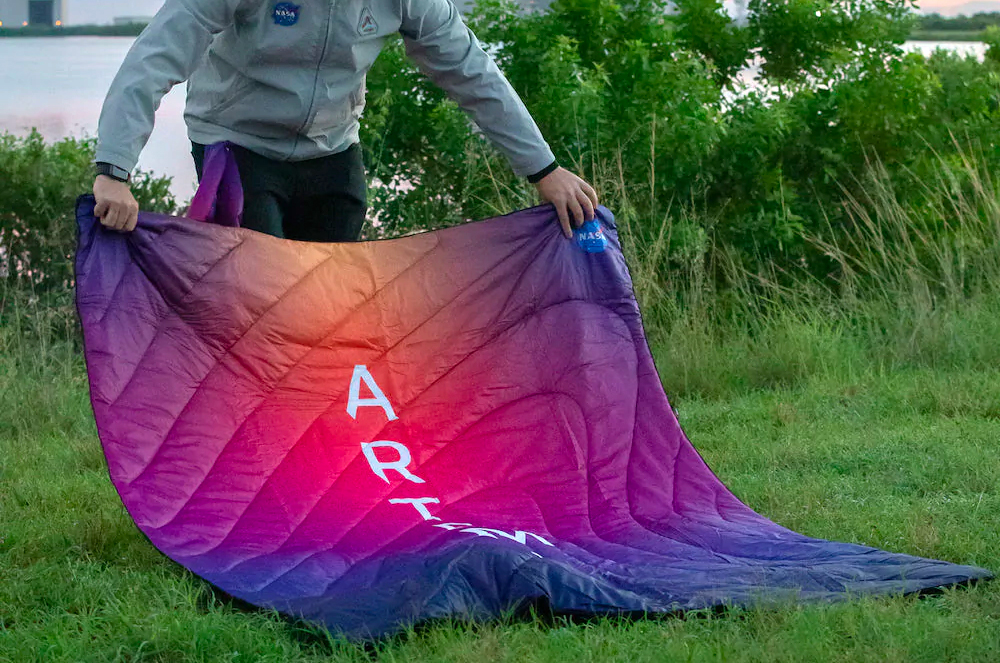 With NASA getting ready to return to the moon, a blanket company is ready to “cover” all your launch and lunar viewing needs.

Rumpl, which since 2013 has been making outdoor blankets using sustainable materials and modern technologies, now has a limited edition collection of NASA Artemis products (opens in new tab). Introduced in celebration of the space agency’s first moon-bound launch of a human-rated spacecraft in more than 50 years, the Rumpl line is produced in partnership with Oxcart Assembly, the advertising and marketing agency selected by NASA to develop the wardrobe for the Artemis program’s on-air commentators (opens in new tab).

“At Rumpl, we are all about embracing the adventure. With space being the ‘final frontier,’ partnering on a project with the Artemis mission was an opportunity we could not pass up,” Corey Nielsen, senior manager of special projects at Rumpl, said in an interview with collectSPACE.com.

The Rumpl x NASA Artemis collection (opens in new tab) includes two of the company’s original puffy blankets and a puffy poncho. The products range from $129 for each blanket to $199 for the poncho.

Rumpl’s original puffy blanket is a packable, portable outdoor blanket “that goes everywhere.” The blankets feature a ripstop shell and insulation made from 100% recycled materials.

With corner loops to stake them to the ground and a clip allowing them to worn as a cape, the blankets are suited well for watching an early-morning rocket launch (like the Artemis 1 liftoff, as currently scheduled (opens in new tab)) or heading out to moon-gaze as NASA’s Orion spacecraft travels farther into space than any spacecraft designed for astronauts has traveled before.

The first blanket and a matching poncho feature the colors of the Artemis program.

The Horizon blanket also features the Artemis logotype running the length of the 52-inch by 75-inch (132 by 190.5 centimeters) cover and the NASA insignia in one corner.

The Horizon poncho includes the same recycled insulation as the blanket and is emblazoned with the NASA insignia and Artemis program logo on its laminated waterproof shoulders. The hooded poncho packs into its own pocket and can pull double duty as a pillow.

The second blanket in the collection trades the vibrant colors of the other pieces for a nod to NASA’s retro-cool (and now resurrected) branding (opens in new tab).

“We also chose to utilize the iconic NASA ‘worm’ design for the final piece of our collection,” Nielsen told collectSPACE.

Rumpl’s NASA White & Red blanket has an all-white exterior with “NASA red” stitching and the space agency’s “worm” logotype at its bottom corner, evoking the look of an astronaut’s spacesuit. The reverse is all black.

Both Artemis blankets fold down to just 7 by 16 inches (18 by 41 cm) when packed into the included matching stuff sacks. The Horizon sack is adorned by the NASA insignia and Artemis logo. The White & Red sack features the NASA “worm” logo.

“Both design motifs speak directly to who we are as a brand as we aim to bridge the tried and true nostalgia of the NASA program while pushing the future ahead with the Artemis torchbearer identity,” said Nielsen.

In addition to the Artemis-specific products, Rumpl is also selling two blankets with deep space-inspired designs.

The “Cosmic Reef” blanket ($99) uses a Hubble Space Telescope image of an nebula that looks “just like an underwater seascape.” The second blanket, titled the “Lagoon Nebula” ($249), also features a Hubble image, this one of only two star-forming nebulae that are faintly visible to the eye from mid-northern latitudes. “We can’t think of a better use for this down puffy blanket than stargazing,” the Rumpl website reads.

The limited edition Rumpl x NASA Artemis collection is available to order from the company’s website (opens in new tab).