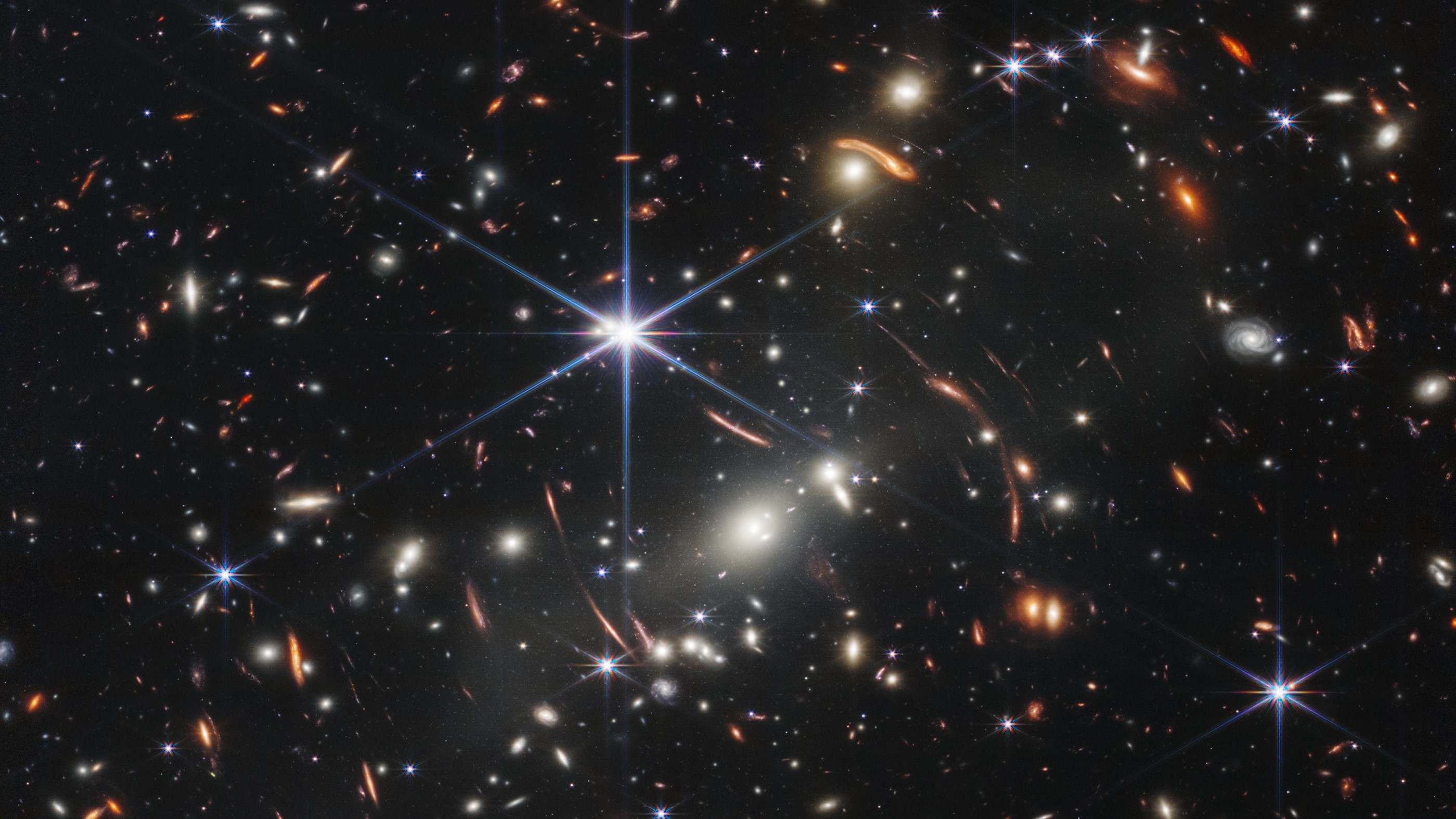 The James Webb Space Telescope’s spectacular image of the deep infrared universe has uncovered 42 new, lensed images of galaxies and revealed in unprecedented depth the shape of the lens, which may eventually help us to see the very first galaxies.

The reveal of the James Webb Space Telescope deep-field image, by U.S. President Joe Biden in a special White House event held on July 11, was a closely guarded secret. Teams of astronomers raced to be the first to analyze it, with three new papers being posted to the community’s preprint server within a week of the image’s release.

“We were kinda sideswiped, to be honest!” Brenda Frye, an astronomer at Steward Observatory at the University of Arizona and co-author of one of the papers, told Space.com. “Normally we have a year or two advance warning, but no one saw [this release] coming at this time.”

The galaxy cluster SMACS J0723.3-7327, known as SMACS J0723 for short, is among a set of galaxy clusters that Webb is imaging for various gravitational-lensing surveys. Beyond that, said Frye, there was nothing exceptional about SMACS J0723 — until now.

“It was beautifully chosen [to be one of the first images] because it was a relatively unknown target,” she said.

Gravitational lensing is a phenomenon in which a very massive object’s gravity warps space into a shape analogous to an optical lens, resulting in light from whatever is behind the lens being distorted and magnified in brightness. Galaxy clusters are particularly efficient lenses because they pack a huge amount of mass (in the case of SMACS J0723, about 100 trillion times the mass of the sun) into a relatively compact volume with a diameter of about 3 to 5 million light-years across.

Previous surveys by the Hubble Space Telescope and the retired Herschel Space Observatory had found a handful of lensed images of background galaxies in their SMACS J0723 observations. But Webb takes the hunt to a whole new level.

Frye’s team, which was led by graduate student Massimo Pascale at the University of California, Berkeley, discovered 42 new lensed images in the background of the new deep-field image. Gravitational lenses can create multiple images of the same galaxy, so these 42 images represent 19 individual galaxies. Another team, led by Gabriel Caminha of the Max Planck Institute for Astrophysics in Germany, counted 27 new lensed images.

Whatever the final tally, these lensed images allow scientists to finetune a map of how matter — both visible and dark — is distributed in the SMACS J0723 cluster, and in turn model the shape of the lens. One of the new papers, from a team led by Guillaume Mahler of Durham University, concluded that most of the mass is centered on the brightest, most massive galaxy in the cluster.

Examples of some of the lensed background galaxies in Webb’s image of SMACS J0723.  (Image credit: NASA/ESA/CSA/STScI/Pascale et al.)

The current most distant confirmed galaxy is a faraway object known as GN-z11, which has a redshift of 11.09, meaning we see it as it existed 13.4 billion years ago, just 400 million years after the Big Bang. (“Redshift” refers to the stretching of the wavelength of light that occurs as the universe expands between a distant object and the viewer. The higher the redshift factor, the more distant the lightsource.)

An even more distant candidate is HD1, discovered at a redshift of 13, appears to us as it did just 300 million years after the Big Bang. Even more recently, early results from Webb have identified another candidate galaxy at redshift 13, called GLASS-z11. However, astronomers have not yet confirmed the redshifts of either HD1 or GLASS-z11.

Webb is expected to smash both these redshift records, although whether any of the lensed galaxies seen in SMACS J0723 are more distant than Gn-z11 or HD1 has yet to be determined. Pascale and Frye are interested in mapping a phenomenon called the “critical curve,” because it is along these curves that the gravitational lens applies the greatest magnifying power, and where astronomers have the best chance of seeing the very first galaxies.

“Typical magnification in a lensing cluster is about a factor of 10, and that’s not enough to see the first galaxies,” Frye said. “But if we look near the critical curve, that’s where things are magnified by hundreds or even thousands of times.”

Examples of some of the lensed background galaxies in Webb’s image of SMACS J0723.  (Image credit: NASA/ESA/CSA/STScI/Pascale et al.)

“Ultimately, what we want to do is look right along the critical curve where the magnification is highest, and that’s where we will find the highest redshift galaxies,” Frye said.

Hence why the initial trio of new papers on the Webb deep field concentrate on modeling the amount and distribution of matter in the foreground cluster, and consequently the shape of the lens and the location of the critical curve.

However, the modeling can also tell us about the galaxy cluster’s own history.

“We found the mass distribution to be a bit more elongated than expected,” Pascale said. “Maybe that says something about the cluster’s merger history, and we can extrapolate from that and learn something about cluster formation as a whole, which occurs in a very chaotic environment where gravity from all these galaxies is pulling on each other.”

The immediate next step for Pascale and Frye’s team, and the authors of the other two papers, is to go through the peer-review process to see these results published in scientific journals. Beyond that, data from Webb’s NIRISS (Near Infrared Imager and Slitless Spectrograph) is awaiting analysis and should help scientists determine the spectroscopic redshifts of the lensed galaxies and see just how far away they are. (The deep-field image was captured by NIRCam, the Near-Infrared Camera.)

“Before Webb imaged it, SMACS J0723 wasn’t the star of the show,” Pascale said. “Now, suddenly, there’s paper after paper on it, which really speaks to how powerful Webb is, to reveal things that we couldn’t see before.”

The preprint of Pascale and Frye’s paper can be found here. The other two papers are available here and here.