Destiny 2 The Title SMG Guide: How To Get The Guardian Games Gun Fast

The Guardian Games are back in Destiny 2, pitting players against one another in a friendly competition to see which of the three character classes will reign supreme. Whether the bragging rights interest you or not, you’ll want to pick up the Guardian Games’ new submachine gun, The Title. This slick little gun carries some of the best perks in the class, along with a new Origin Trait just for the Guardian Games called Classy Contender.

If you lean into the Guardian Games, you’ll likely get multiple rolls of The Title, but your first chance at the gun will require you to finish the event’s opening quest, “Best in Class.” It’s not especially difficult, but it is something you’ll want to knock out quickly in order to start messing around with your new gun and to fully open up your Guardian Games options. Here’s how to knock out the quest quickly and claim The Title. 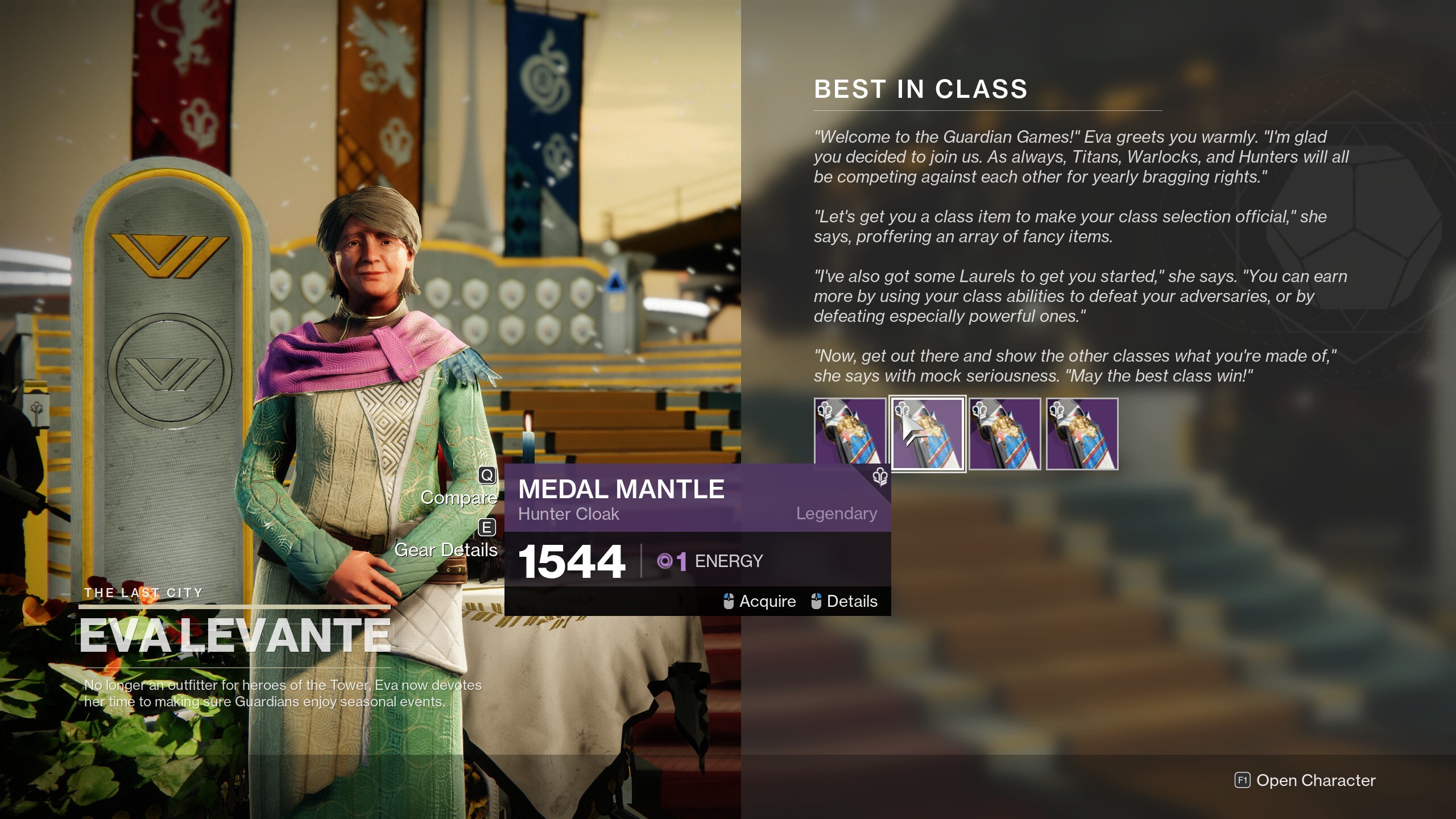 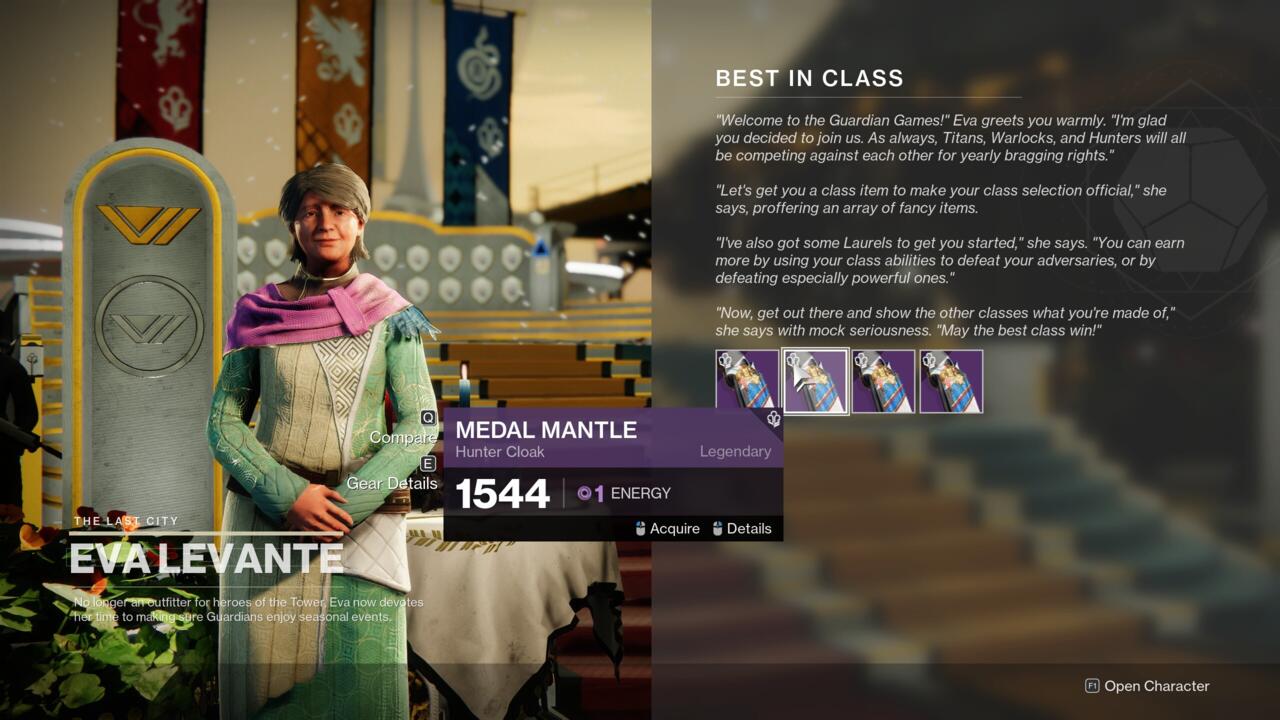 Your quest starts in the Tower with Eva Levante, the event vendor who shows up in the center of the Courtyard. To start, you’ll want to claim your Guardian Games class item, which you get for free. After that, pick a “Contender Card” from Eva. You’re going to need to complete a playlist activity like a Strike or Gambit match, so pick the card that lines up with whatever you want to do next–you should only need to complete one activity, so all options are equal.

When you get into your activity, you’ll want to earn earn Laurels, one of the main currencies of the Guardian Games. Laurels drop while you’re wearing your Guardian Games class item whenever you kill strong enemies–anything with an orange health bar or yellow health bar–or when you take out enemies with your abilities. You can earn Laurels anywhere, so long as you’re wearing your Guardian Games class item. This step also requires you to earn a Medallion, but if you’re killing enemies with a mind toward getting Laurels, you should earn one along the way. We completed this step in a single Strike. 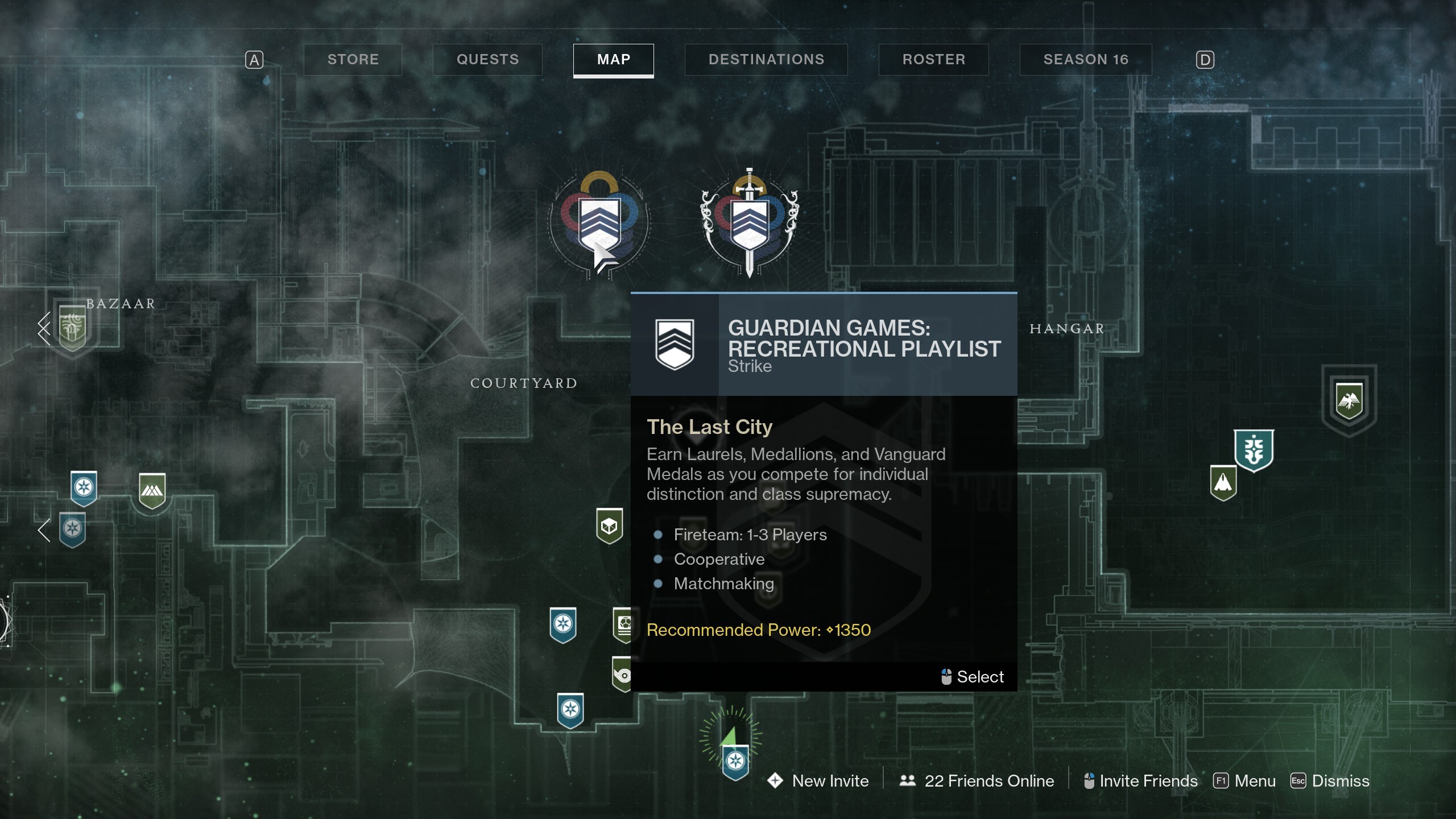 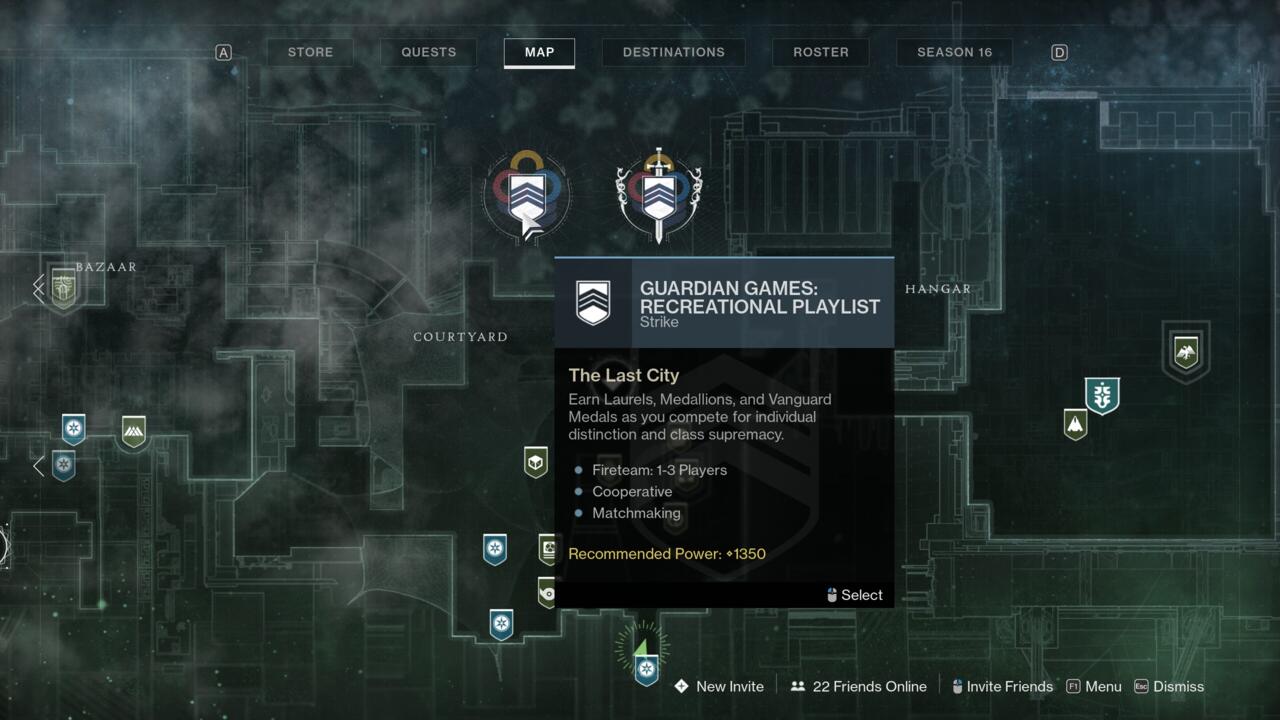 After you’ve knocked out your activity and earned a few Laurels, you’ll return to the Tower to deposit your medallion in the big podium in the center of the courtyard. Return to Eva and she’ll give you another item, the Medallion Case, which tracks the medallions you earn and the Laurels you’re carrying at any given time.

Head next to Zavala and he’ll introduce you to a few new elements of the Guardian Games. First are Vanguard Medals, which are like Triumphs you receive for doing things in the Guardian Games playlist. Medals unlock for all sorts of reasons, like killing three enemies with melees in rapid succession, gaining killstreaks with specific weapons, using your abilities, and more. There are also three new Guardian Games playlists for you to access from the Tower’s Courtyard screen in the Director. The Recreational playlist is a little easier and more casual, while the Training and Competitive playlists are a bit more serious. Jump into the Recreational playlist and grab any Vanguard medal in order to proceed on the Best in Class quest. You’ll get one for basically anything you do, but a quick and easy way to earn one is to quickly melee three weak enemies.

Return to the Tower after knocking out a Recreational playlist activity and you can wrap up the quest. Speak with Zavala first, who will give you a new item for tracking your scores, and then head to Eva to get your first copy of The Title.

The Title is a significant SMG because it has a high rate of fire and solid range that makes it similar to other great SMGs, like Funnelweb, a current favorite. What might put The Title ahead of other competitors is its new Origin Trait, Classy Competitor. With this equipped, you earn class ability energy with every kill. The gun also fires Void ammo, which means you can synergize it with new Void 3.0 aspects and fragments, which allows the gun to fire Volatile rounds. 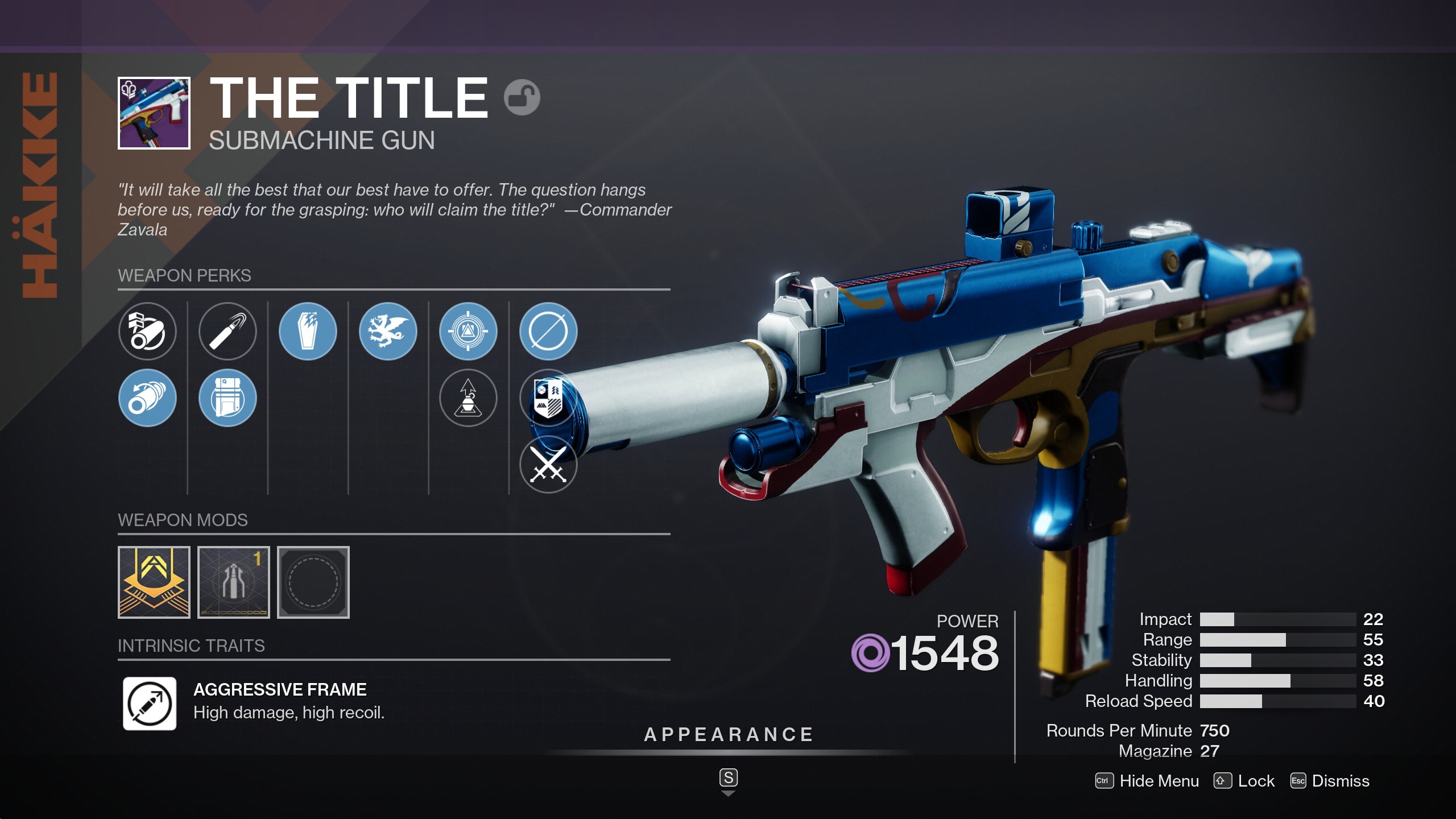 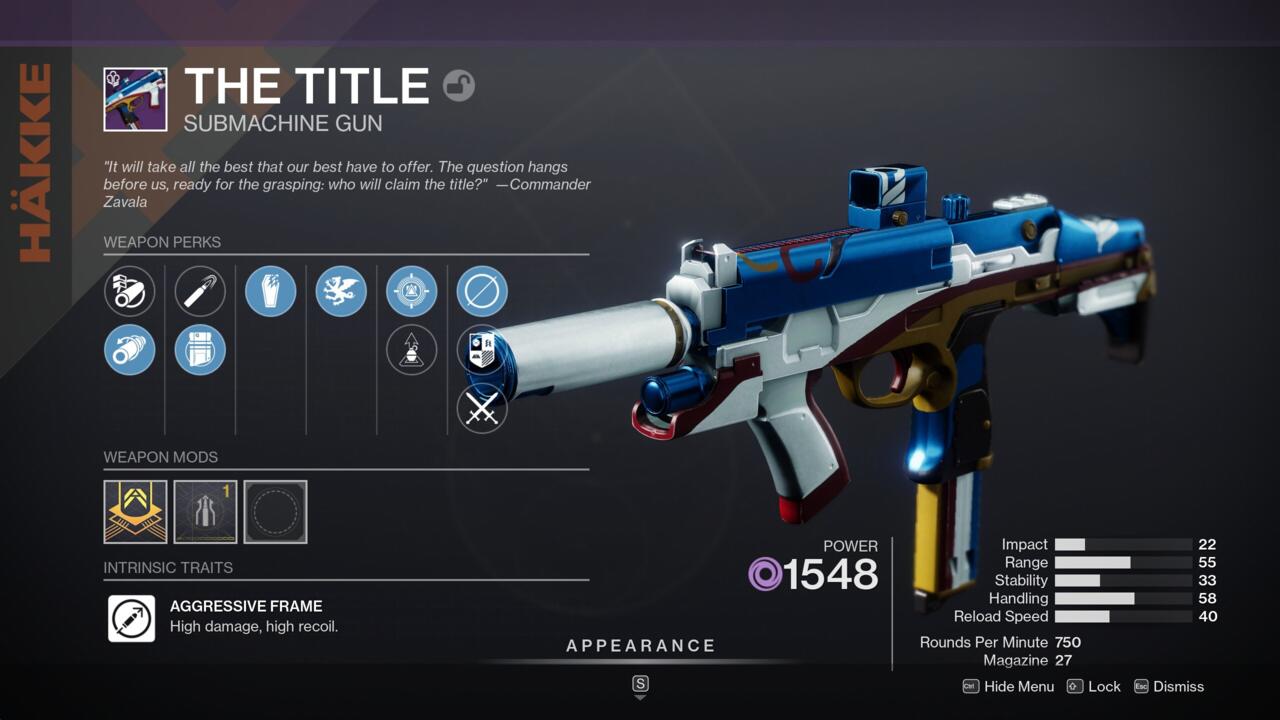 The first copy of The Title you get comes with Demolitionist and Vorpal Weapon for its perks, but Bungie noted in its recent This Week at Bungie blog post that you can earn various rolls of the gun, as well as Masterworked version with double perks in the third and fourth slots. From what we can tell, however, The Title doesn’t drop just from Guardian Games activities–at least, not in the Recreational and Training playlists. It seems very likely that if you want additional rolls of The Title, you need to earn light the Bronze, Silver, Gold, and Platinum torches in the game, and earn their rewards.

Lighting the torches is part of the “Guardian Games: Medallion Battalion” quest you can pick up from Eva. It tracks your progress in depositing medallions for your class in the podium in the Tower, awarding points based on the rarity of the medallions you’re dropping in–the highest points are for Platinum medallions, while Bronze awards the lowest. Deposit enough medals and you’ll unlock the ability to light a torch behind the medallion podium in the Tower, which unlocks a reward for the week. After unlocking the Bronze torch, our rewards hasn’t unlocked yet, suggesting you’ll need to wait until the weekly reset to actually reap these rewards. You can light up to eight torches in a week–two each for Bronze, Silver, Gold, and Platinum levels–with corresponding rewards for each torch.

So although we’re unsure of exactly what you’ll earn from these torch-lightings, it seems that better versions of The Title are very likely to drop here. We’re also waiting to see what potential rewards will come from the Guardian Games: Competitive playlist, which is only accessible during the weekends. The idea is to play the Training playlist during the week to unlock special buffs for your character, and then play the Competitive playlist over the weekend to unlock better rewards and earn more medallions for your class. We’ll update this article when the Competitive playlist unlocks with more information.