Final Fantasy 16: Everything We Know

Six years have passed since the last mainline installment in the decidedly not-so-final Final Fantasy series, making this one of the largest gaps between games in the series’ 35 years of history–though all that waiting seems to be for good reason. We only have one trailer for Final Fantasy 16, but what we’ve seen makes the game look like a high-fantasy epic combining the grandeur of older titles with the cutting-edge technology of newer games, making us hopeful that this next entry will be well-worth the wait.

However, with Summer Game Fest Live and plenty of Not-E3 showcases just around the corner, it seems likely our wait is almost over. In the next few weeks, we expect to hear a bit more about the highly-anticipated RPG–and maybe even get a release date. Until then, here’s everything we know about Final Fantasy 16 so far. 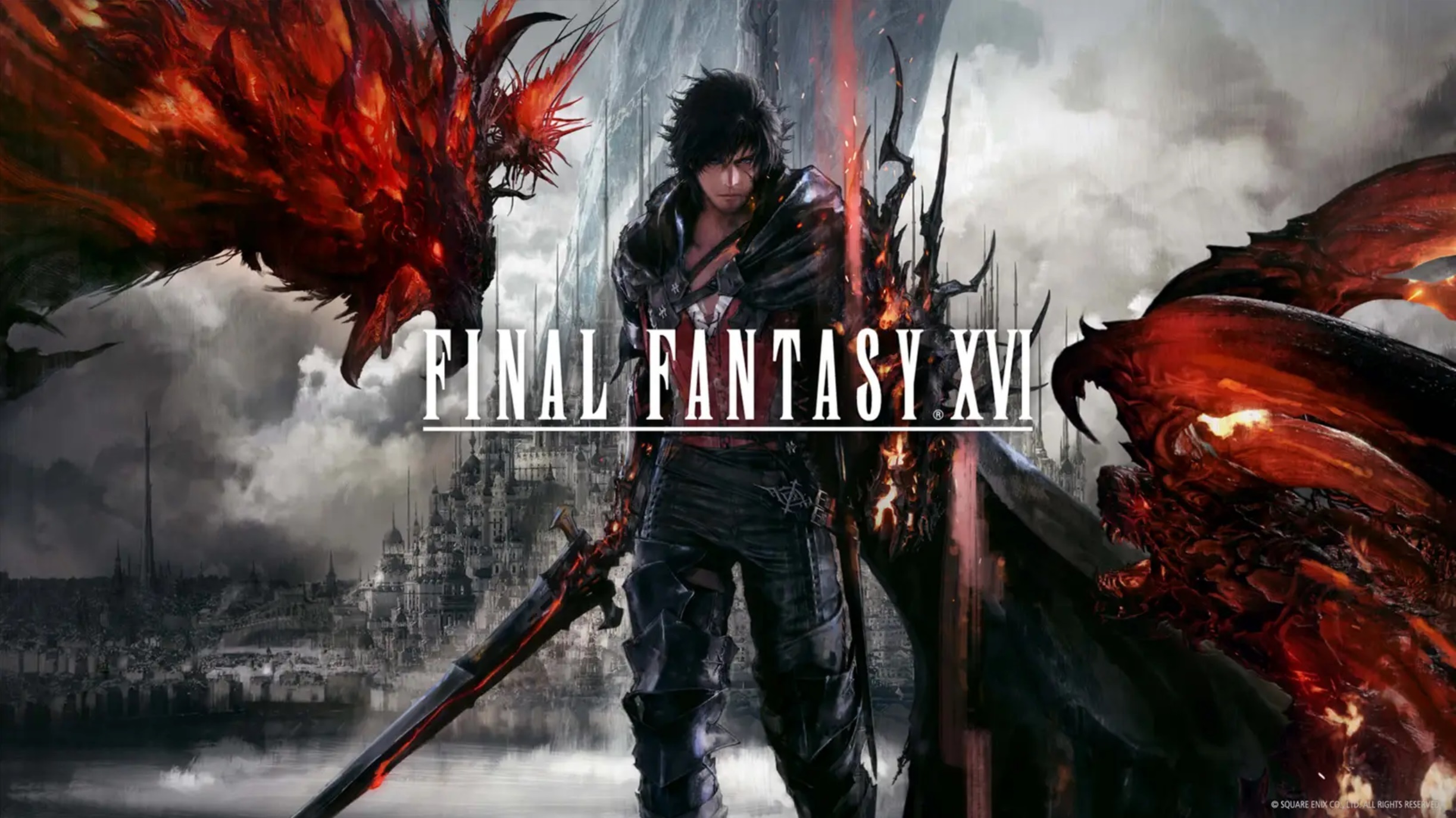 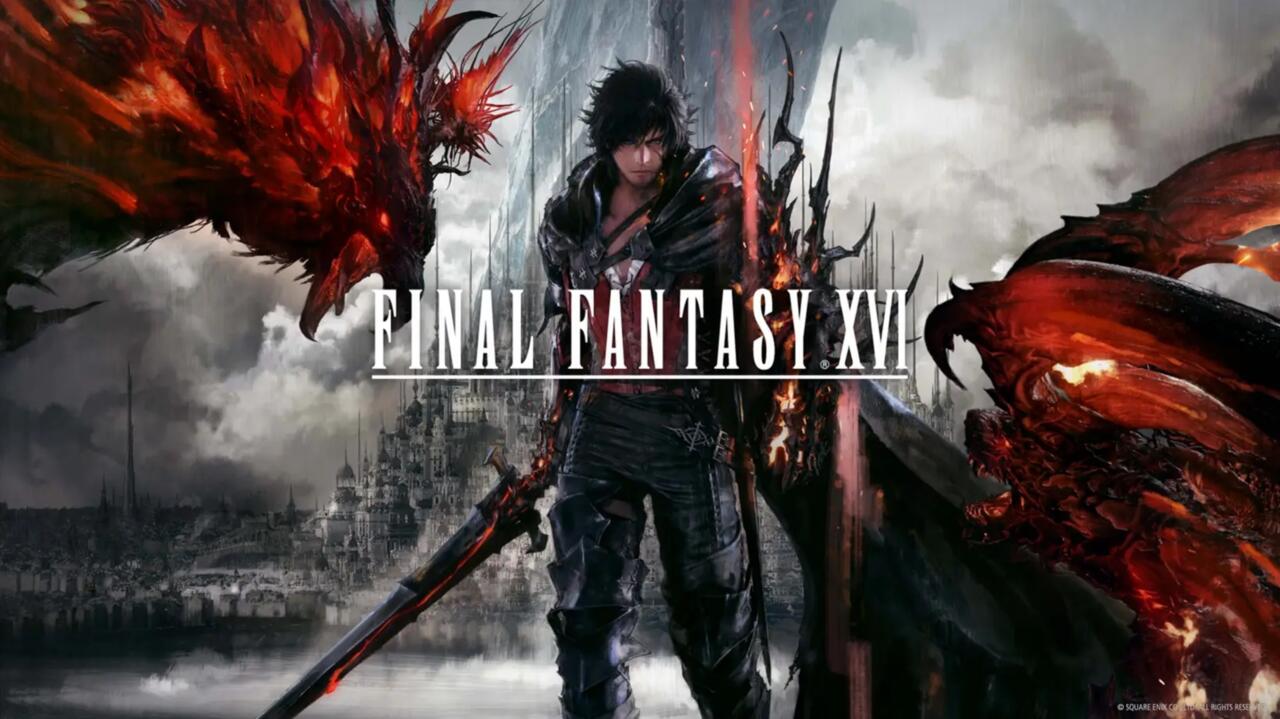 Final Fantasy 16 might not have an official release date, but a recent interview with the game’s producer, Naoki Yoshida, makes it sound like the game is coming sooner than later. On May 5, Yoshida told UNIQLO magazine the game is near the end of its development, before sharing a bit more about what fans can expect.

“Now we’re at the finale of the new game FF16’s development,” Yoshida told UNIQLO. “Unlike an online game that depicts multiple players simultaneously, FF16 focuses on an individual so the state of immersion into the story will be different. I feel like the story will be very deep.”

All that said, it seems possible FF16 could come out later this year. After all, it has been in development for several years now. What’s more, last summer, Yoshida confirmed the development team had already finished the main story scenario for Final Fantasy 16, as well as the English voiceovers.

Much like Final Fantasy 7 Remake, Final Fantasy 16 will be a limited-time PlayStation exclusive. Unlike FF7 Remake, however, it won’t be cross-generation, meaning PS4 owners will have to make the move to PS5 in order to play it.

Square Enix shared this news during the game’s reveal trailer, noting, “The following content is captured on PC emulating the PS5 experience,” before adding the latest entry in the Final Fantasy saga will, “not [be] available on other platforms for a limited time after release on PS5.”

Is Final Fantasy 16 coming to PC or Xbox?

Rejoice, PC gamers! The trailer also stated the game is coming to PC following its exclusivity window, though as of right now there’s no word on how long that might last. If it follows the same trend as FF7 Remake, it’s likely FF16 will make its way over to PC about a year and a half after its initial console release. It also wouldn’t be too much of a surprise if FF16 comes to Xbox at some point, given that a handful of Final Fantasy titles already live on Xbox platforms.

The first trailer for FF16 is titled “Awakening,” and offers four minutes of story, cutscenes, and gameplay. It also features a powerful orchestrated theme with a few Final Fantasy touches, like the iconic Crystal Prelude. If we had to take a wild guess, it sounds a bit like composer Masayoshi Soken’s work on FFXIV: Heavensward.

In addition to the detailed reveal trailer, Square Enix also launched an official website with in-depth looks at FF16’s new world and characters to get you started on understanding the backstory. What’s notable about this entry, in particular, is that it’s being developed by Creative Business Unit III–which is the not-so-flashy name for the division behind the incredible MMORPG Final Fantasy XIV. It’s promising given that Naoki Yoshida is leading production on FF16–he led the team behind the rebirth of FFXIV and continues to direct the MMO, which keeps getting better and is regarded as top-tier in video game storytelling. FF16 itself is being directed by Hiroshi Takai, who has a lengthy history with Final Fantasy and Square Enix, and was even part of developing FFXIV’s reboot.

The story so far

From what we can tell from the trailer and official website, there’s conflict between realms (basically nations) in the world of Valisthea and a bunch of political drama, but also a focus on Dominants. Domnants are the few special people who can wield the power of Eikons, which are what summons are called in FF16’s world (and in FFXIV).

It looks like you’ll go through two separate time frames in FF16’s story, which you can see from main character Clive Rosfield’s evolution from a spiffy young man with a fancy haircut to a grizzled veteran with a scruffy beard and a mark tattooed on his face later in life. He’s the son of his realm’s archduke, and wields Eikon-related powers in combat but isn’t necessarily a Dominant himself. He’s sworn to protect his brother Joshua, the young boy in the trailer who was fated as a Dominant instead. However, as shown in the trailer, Joshua couldn’t control his Eikon–he summons Phoenix after watching someone presumably important get killed right before his eyes. These events are capped by a battle between Phoenix and Ifrit, which might be the tragedy (stated in the official character profiles) that drives Clive in FF16.

Another character seen in the trailer is Jill Warrick. She’s the young girl with grayish hair who accompanies Joshua. She’s said to have a complicated life and comes from another realm. She was essentially adopted by the Rosfields, and acts as a mediary between warring nations. She’s said to be a trusted confidant to both Clive and Joshua. 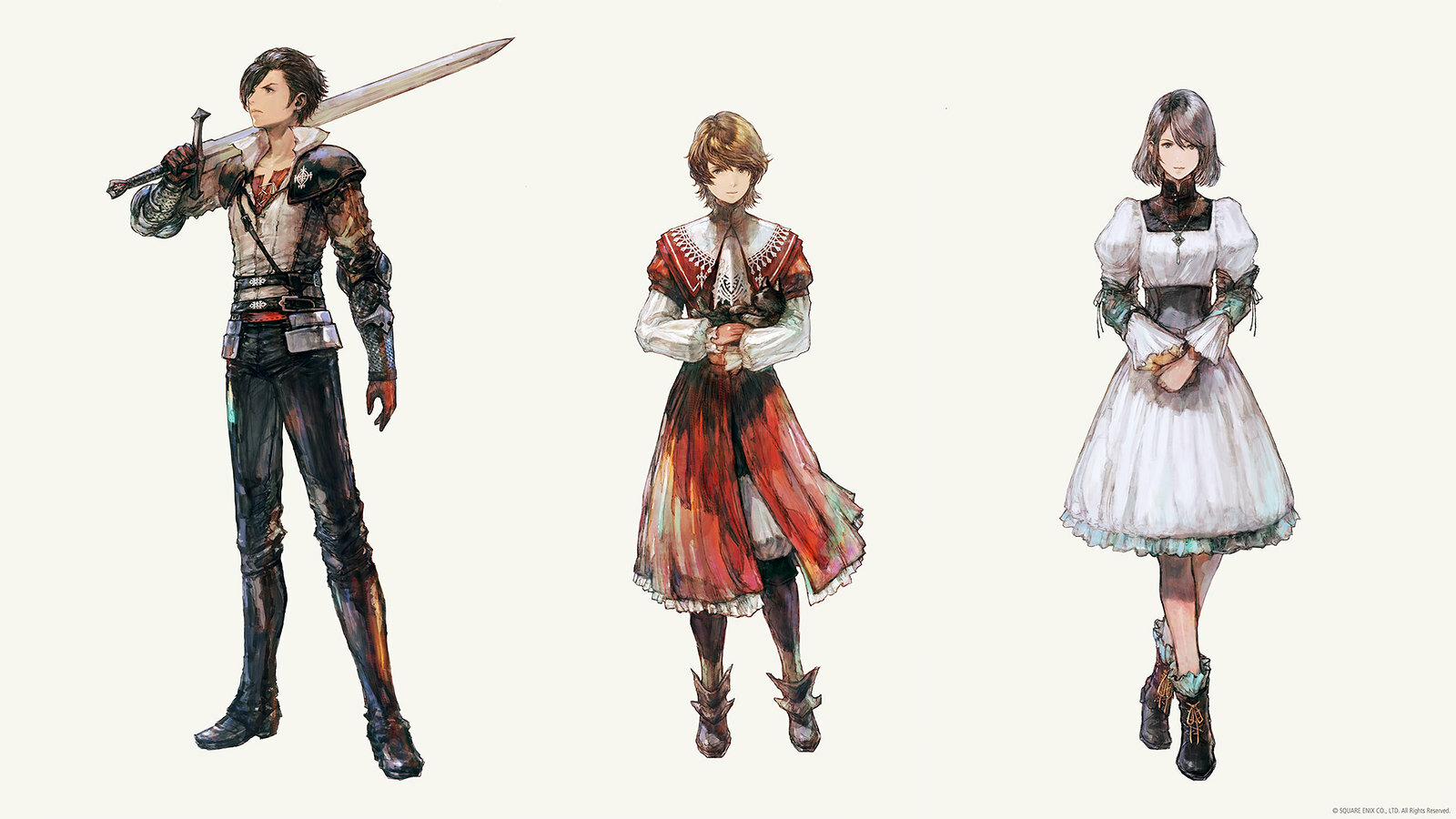 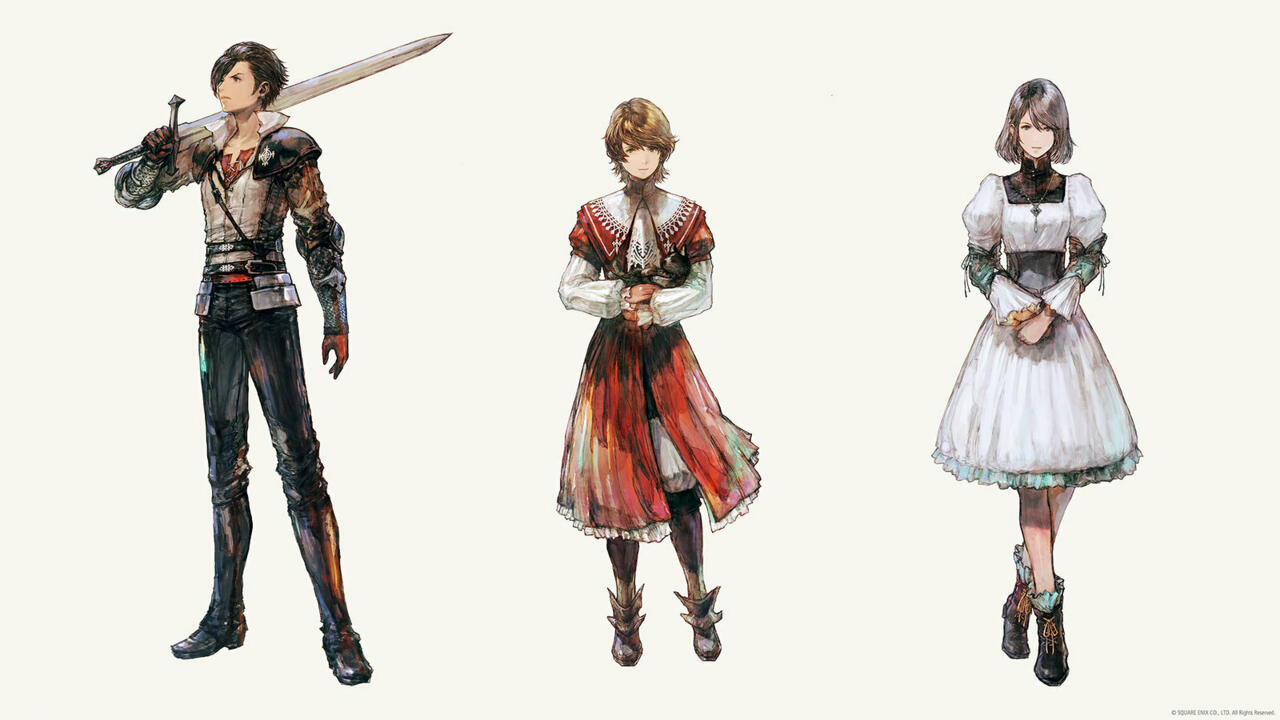 Throughout the trailer, you see other characters in battle and in conversations about the political turmoil that seems to be fueling the war in Valisthea. You see other iconic Eikons like Shiva and Titan being used on the battlefield. It looks like Eikons, and Dominants by extension, are akin to powerful weapons of war that shift the balance of power between realms in Valisthea. There’s also a fight against an armor-clad lance-wielding Dragoon, said to be an Imperial Viper, which has the characters shook–another series staple.

FF16’s world also revolves around Mothercrystals, which are said to bless the land with aether (basically magic). But a destructive force called The Blight is also washing over the world. It’s worth keeping in mind that FF16’s tagline is, “The legacy of the crystals has shaped our history for long enough.” We’re not sure what it means, but it’s provocative and may have to do with what’s been happening to Valisthea.

What the logo can tell us

We can always count on artist Yoshitaka Amano to create a new logo for each Final Fantasy that tells us something about the game’s story. In the case of FF16’s logo, it features Ifrit and Phoenix face-to-face in a fight, which is a battle that concludes the trailer. With Ifrit as a key opposing force and Phoenix being the Eikon that the Rosfields wield, this seems to be a central conflict that drives the game. It also appears that Eikons are pivotal to how FF16’s world operates, more so than previous Final Fantasy games.

From the snippets of gameplay in the trailer, FF16 takes on an action-RPG style of combat system and looks like it shares similarities to FF15 and FF7 Remake. Clive can cast fireballs, engage at melee range with his sword and warp-like abilities, and use a few powers that look like they’re tied to Eikons (indicated by the stone fist summoned in the fight against a Dragoon).

No UI or HUD elements were shown, so it’s hard to tell if or how it incorporate parts of the series’ iconic ATB (active time battle) system, how spellcasting might work, or even how combat encounters flow. We’ve also only seen Clive in action, so we’re unsure if there’s a party system or how it would work (if it exists).

Ryota Suzuki, who was a combat designer for Devil May Cry 5 and Dragon’s Dogma, is the battle director for FF16, which could result in something quite exciting. And despite this renewed focus on action, producer Naoki Yoshida noted that this new approach will not come at the expense of the game’s story.

Sorry, folks. You’ll have to wait a bit longer for preorders to go live, but rest assured we’ll let you know when they do.