Final Fantasy Brave Exvius Is Collbarating With Its Own Spinoff, War Of The Visions 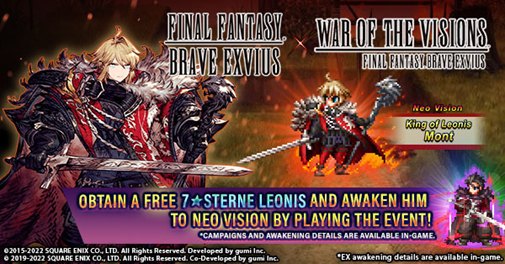 The event is happening now and along with the new units and summons, there are also new login bonuses and new daily summons rewards that will be available until May 25. The main rewards for participating in the event are King of Leonis Mont and Vinera Fennes from War of Visions, and the Vision Card, Proof of Resolution and Resolve. The steps to unlock these rewards are complicated outside the context of the game, and involve moving through a series of steps with Summon Coins and NV Exchange Tickets. Luckily, Square Enix has outlined the process in more detail on this website.

The Brave Exvius games are no stranger to collaborations with the larger Final Fantasy world. Just last month, Rinoa From Final Fantasy 8 was available as an unlockable summon, and War of the Visions collaborated with its inspiration, Final Fantasy Tactics back in 2020.