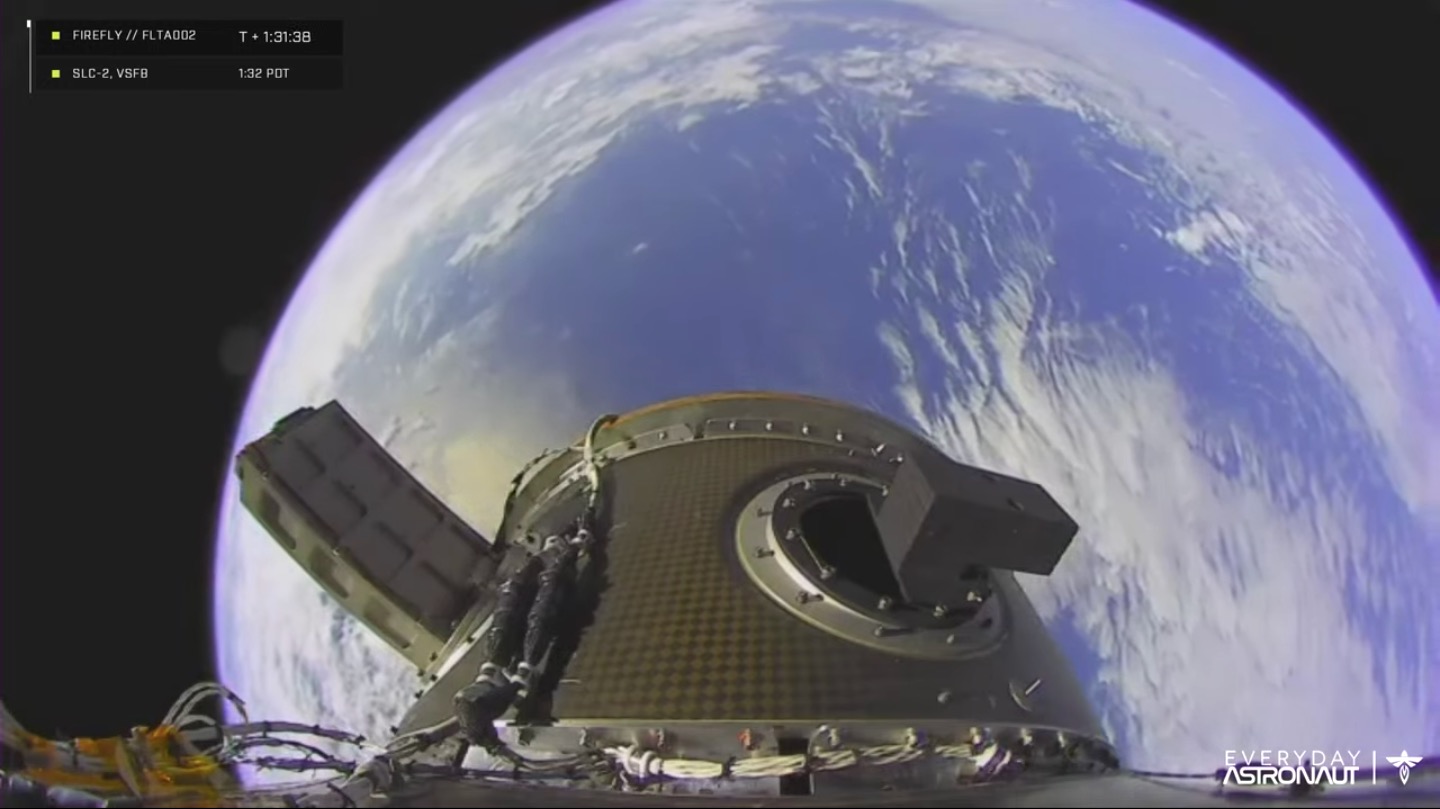 As that name indicates, it was the second orbital launch for Alpha. During the first, a test flight from Vandenberg in September 2021, one of the rocket’s four first-stage Reaver engines shut down prematurely, leading to the loss of the mission.

Things went better today; Alpha climbed into the California sky smoothly and hit its marks as planned. The rocket’s two stages separated about 2.5 minutes after liftoff, and the upper stage inserted into an elliptical transfer orbit five minutes after that.

The upper stage performed a brief circularization burn with its single Lightning engine about 53 minutes after launch, maneuvering itself into an orbit targeted to be 190 miles (300 kilometers) above Earth.

The mission plan called for all three payloads to be deployed just under an hour after liftoff. That did indeed happen, Tim Dodd of EverydayAstronaut.com (opens in new tab) said during his webcast of the today’s launch, citing conversations with Firefly personnel. (Alpha’s upper stage was not in communication with a ground station when deployment occurred, so news of this success did not come in real time.)

All three payloads are tiny, each about the size of a loaf of bread. One of them, called Serenity, comes from the nonprofit organization Teachers in Space. Serenity was designed to collect a variety of data during today’s flight, which will be shared with the educational community, according to a Firefly mission description (opens in new tab).

Also reaching orbit today was TechEdSat-15 (TES-15), which is owned by NASA in coordination with San Jose State University in California. TES-15 features an “exo-brake” designed to help satellites leave their orbital perches more smoothly when their work is done.

“The exo-brake will deploy after the cubesat is ejected from its dispenser to deorbit the cubesat,” Firefly wrote in the mission description. TES-15 also carries an experiment designed to optimize data transfer from the little spacecraft, the company added.

The third payload — the PicoBus deployer, from the nonprofit Libre Space — carries five tiny payloads of its own. Those bantam “picosats” include Genesis-L & Genesis-N, from AMSAT (Radio Amateur Satellite Corporation) Spain. The pair will demonstrate a pulsed-plasma thruster system for spacecraft propulsion and “build heritage for future missions,” according to Firefly.

PicoBus is also carrying Libre Space’s Qubik-1 and Qubik-2, which will perform communications experiments, and FossaSat-1B. This latter satellite, from the Spanish company Fossa Systems, will test communications and remote-sensing tech. It also carries a low-resolution Earth-imaging camera.

The expendable Alpha is designed to give small satellites dedicated rides to orbit. The rocket can deliver 2,580 pounds (1,170 kilograms) of payload to low Earth orbit for $15 million per launch, according to Firefly’s Alpha user’s guide (opens in new tab).

Firefly wants Alpha to be a leading option in the small-satellite launch industry, an increasingly competitive space that features players such as Rocket Lab and Virgin Orbit (which both offer smallsats dedicated rides) and SpaceX (which sells “rideshare” spots on its larger, more powerful Falcon 9 rocket).

Today’s test flight was originally supposed to launch on Sept. 11, but Firefly scrubbed that attempt due to an unexpected drop in helium pressure. Unfavorable weather forecasts then pushed the mission to Sept. 30; an attempt on that day was aborted just after engine ignition, delaying the launch by an additional day.