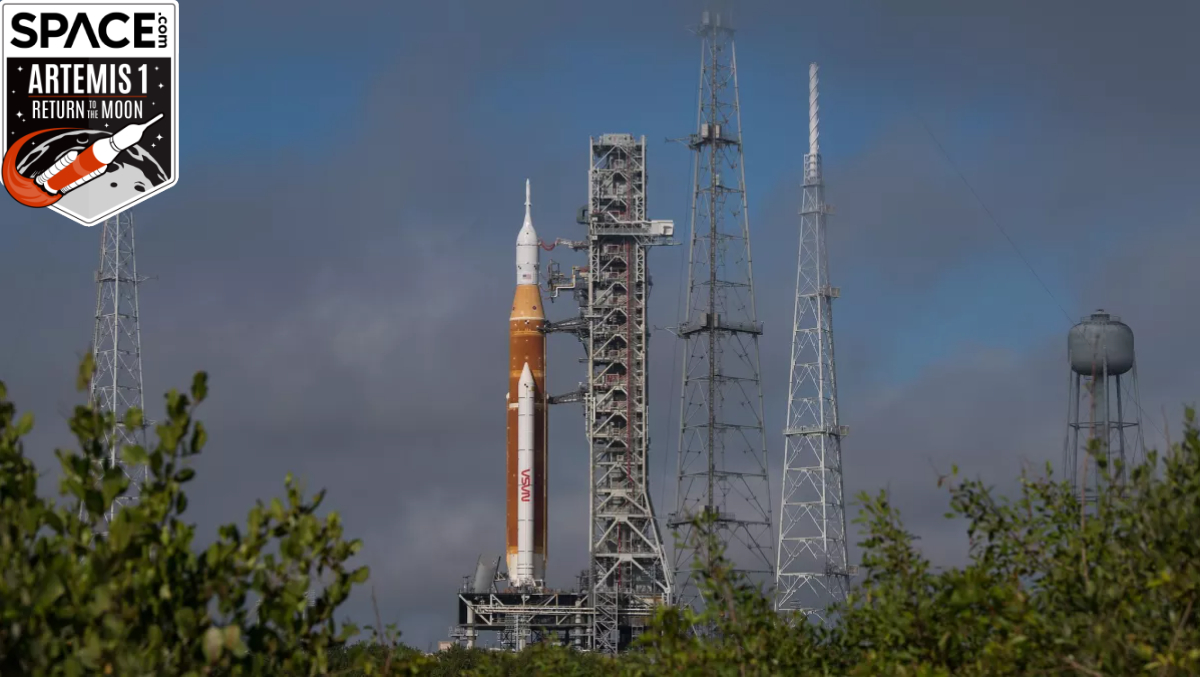 CAPE CANAVERAL, Fla. —  A fuel leak that thwarted NASA’s second attempt to launch its new Artemis 1 moon rocket on Saturday (Sept. 3) will likely take weeks to fix, and may even force the megarocket off its launch pad, space agency officials said.

The liquid hydrogen leak occurred Saturday morning as NASA tried to fuel its massive Space Launch System (SLS) megarocket to launch Artemis 1, an uncrewed test flight to the moon, from Pad 39B here at Kennedy Space Center (KSC). Despite three separate tries to fix the leak, engineers weren’t able to stem it and ultimately stood down to assess the situation further.

That assessment, and the repair work it ends up recommending, will keep Artemis 1 on the ground for about two more weeks at a minimum.

“We will not be launching in this launch period,” Jim Free, NASA’s associate administrator for exploration systems development, said in a briefing Saturday afternoon after the launch scrub.

That launch period closes on Tuesday (Sept. 6). Artemis 1 will now have to wait until the next window, which runs from Sept. 16 to Oct. 4, to try again. But it may end up slipping deeper into October — another window runs from Oct. 17 to Oct. 31 — due to safety requirements that could force the SLS rocket back into KSC’s cavernous Vehicle Assembly Building (VAB) during the repairs. (There’s also a potential conflict during the earlier window: SpaceX’s Crew-5 astronaut mission to the International Space Station is scheduled to lift off Oct. 3 from KSC’s Pad 39A.)

The first Artemis 1 launch attempt, on Monday (Aug. 29), was scrubbed after the team noticed that one of the four RS-25 engines that power the SLS core stage wasn’t cooling down properly before launch. Analyses soon traced that issue to a faulty temperature sensor, and the team decided to push ahead with another try on Saturday.

Mission team members also successfully troubleshot a hydrogen leak during Monday’s try, but the one they saw on Saturday was different: it was a lot bigger. The Saturday leak occurred near the base of the SLS rocket in what NASA calls a “quick disconnect,” a fitting that connects a liquid hydrogen fuel line to the core booster to fuel it for launch. The leak occurred after a brief “inadvertent” overpressurization of the fuel line that was three times the acceptable pressure, said Mike Sarafin, NASA’s Artemis 1 mission manager.

“This was not a manageable leak,” Sarafin said. The leak led to levels of flammable hydrogen gas near the rocket that were several times higher than the acceptable range, he added. It’s too early to tell if the leak was caused by the overpressurization event (which was triggered by an errant manual command from the Launch Control Center) or not, Sarafin said.

“We want to be deliberate and careful about drawing conclusions here, because correlation does not equal causation,” he said.

One thing is clear, however: The quick disconnect’s soft seal gasket will likely have to be replaced. NASA engineers will meet next week to decide if that can be done at Launch Pad 39B (which would require a special enclosure to be built around the site) or if the 322-foot-tall (98 meters) rocket must be rolled back inside the VAB for easier access.

As things currently stand, the SLS rocket needs to roll back to the VAB soon in order to test its flight termination system, which is designed to destroy the rocket with explosives if it veers off course. The U.S. Space Force, which oversees the Eastern Range for rocket launches, requires NASA to test the safety system every 25 days, and that can only be done in the VAB.

The 25-day deadline for Artemis 1 is just around the corner, so NASA would need a waiver to keep the moon rocket on the pad if it wanted to fix the leak there. It’s unclear at the moment if the mission team plans to seek such a waiver.

“I think we’re going to talk with the Range about what the possibilities are,” Free said.

The picture will likely start to become clearer early next week, after the Artemis 1 team has had more time to analyze data and discuss options, Free and Sarafin said. But they stressed that calling off the launch today was the right move, as did NASA Administrator Bill Nelson, who also participated in the briefing.

“While we don’t have the launch that we wanted today, I can tell you that these teams know exactly what they’re doing, and I’m very proud of them,” Nelson said.

The two scrubs will end up costing NASA some money, as Artemis 1 will need to use more liquid hydrogen and liquid oxygen propellant than originally planned. But that extra expenditure is acceptable, Nelson stressed.

“The cost of two scrubs is a lot less than a failure,” he said.

Artemis 1 will send an uncrewed Orion capsule on a long journey to lunar orbit and back. The mission — the first in NASA’s Artemis program of moon exploration — is designed to show that both vehicles are ready to carry astronauts, which will first happen on the Artemis 2 flight around the moon in 2024, if all goes according to plan.

Ten tiny cubesats are flying on Artemis 1, to conduct a variety of science work and test various technologies. If Artemis 1 rolls back to the VAB, the cubesats’ batteries could be recharged, but it’s unclear at this point if such a step is needed for any of them, Sarafin said.