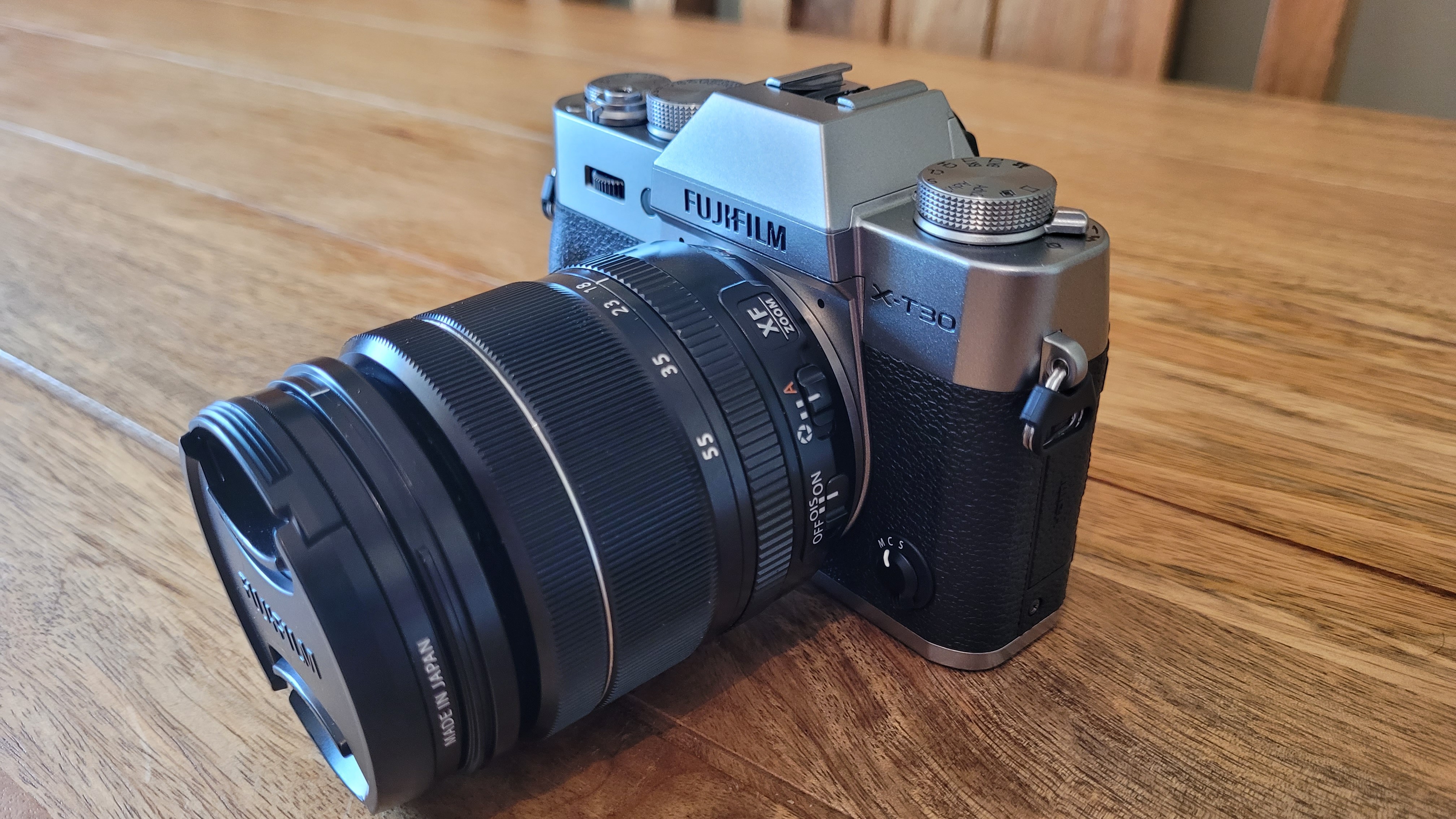 The Fujifilm X-T30 II was released in 2021, just two years after its predecessor the X-T30. It’s almost identical to look at with the same retro design and doesn’t have enough updated features to warrant upgrading from one to the other. For entry-level photographers looking for an affordable but feature-packed mirrorless camera, the newer X-T30 II would be the sensible choice.

The X-T30 II focuses faster, has better subject tracking results and has improved face and eye tracking, albeit only for human faces and eyes and not animals.

It can handle all types of photography and produce nice, detailed images, but we found it struggled in some instances, for example, when indoor handheld shooting where we had to bump the ISO up. We’ve taken an in-depth look at what the X-T30 II can do and whether it deserves to be added to our best mirrorless cameras list.

The Fujifilm X-T30 II has a tilting rear screen that flips out but doesn’t articulate (Image credit: Tantse Walter)

Aside from its gorgeous vintage design, the first thing we notice about the X-T30 II after having recently tested the Canon Rebel SL3/250D is the lack of a fully articulating screen. The rear screen tilts, which is still helpful in some situations, but we miss the option to fold the screen inwards and out of the way. We tested it on a particularly sunny day which made it very hard to see so we used the electronic viewfinder instead, we’d have liked the ability to fold it away to stop nose smudges, but not only for this, we’d like it for storage purposes too to avoid accidental scratches in transit. Of course, an articulating screen offers more versatility for composing at different angles without craning your neck too.

The Fujifilm X-T30 has tactile aluminium alloy dials that make it easy to operate in all climes (Image credit: Tantse Walter)

A stand-out part of the design of the X-T30 II is the dial-based operation. The tactile aluminum alloy dials mean you can pick the camera up for the first time and get to work without having to navigate the menu system. Obviously, more advanced functionality can be found within the on-screen menu. There are physical dials for adjusting the exposure compensation, shutter speed, ISO, and the aperture using the Aperture Ring on the lens. This makes the photography process feel more traditional and hands-on, something we like. Other controls and playback functions are navigated either using buttons and a joystick at the rear of the camera, but also using the touchscreen which will feel familiar to smartphone and tablet users. The only button placement we’re a bit baffled by is the ‘Q’ (Quick Menu) button which is right next to (or underneath if you have bigger hands) where you’d place your thumb. On more than one occasion we accidentally pressed it when composing and taking shots. It’s no biggie, but a niggle nonetheless.

Because of the small size of the camera, the rubberized grip area is too small to really feel secure in the hand, for sustained use we’d recommend purchasing an external grip to provide that bit more comfort and reassurance when shooting. It feels tiny when the screen is tilted.

Overall, it’s a smart-looking, retro design that stands out when seated next to the more mundane-looking mirrorless cameras from other brands. You don’t have to use the old-school dials if you don’t want to as everything can be done by the menu or touchscreen.

Fujifilm X-T30 II: PerformanceAutomatic exposure is a little on the slow sideVery fast burst shooting, even when shooting RAWNot great in low light

The Fujifilm Camera Control App is incredibly easy to use and allows remote shooting as long as you’re on the same network (Image credit: Tantse Walter)

The autofocus on the X-T30 II is very snappy, it uses the same enhanced autofocus algorithms as the considerably more expensive (and now discontinued) X-T4 (opens in new tab). The sensor is faster and more sensitive to light than its predecessor the X-T30, although we did see noise increase quite noticeably when shooting handheld indoors.

There is noticeable image noise in the background, especially around the shadows in this image which was shot indoors in dull lighting conditions (Image credit: Tantse Walter)

We tested the X-T30 II at night to see what it would be like for astro shots. Whilst it doesn’t claim to be an astrophotography camera, we were still pleasantly surprised with the detail picked out on the moon even when shooting handheld (when zoomed in as we were using an 18-55mm lens). It didn’t perform well for capturing stars as it doesn’t collect enough light without bumping up the ISO to an almost unusable level, but in its defense, we were testing it in a Bortle Class 5 (suburban) area so they were already less than favorable conditions for astrophotography.

A full-frame view of the moon in the night sky taken with the Fujifilm X-T30 II  (Image credit: Tantse Walter)

We put the claim of shooting 17 raw files at 20fps to the test during continuous shooting mode, and it did exactly that. 17 raw files at 20fps before stopping to buffer. This is very impressive, and we can’t think of a time where you’d need more than this unless you’re really bad at pre-empting when the action will enter your frame.

The images we managed to achieve, without too much effort, were bright, detailed and true to color, the focus and exposure warnings are helpful (they can be turned off if you wish).

Fujifilm has taken the standard in-camera filters such as black and white, neutral and vivid, and upped the ante. Instead of just giving users the basic pre-sets, Fujifilm has provided a whopping 18 different film simulations, with many of them engineered to reproduce the colors, tones and general ‘feel’ from Fujifilm’s analog heritage.  Each film simulation comes with a description that helps the filmmaker make the selection appropriate to the desired ‘look’ of the video (or photo, post-shoot), for example, there’s a mode for fashion portraits, one for a documentary feel, one high contrast/low saturation for a touch of profoundness and so on.

It’s incredibly easy to add these filters to your photos, simply find it in playback mode, press the ‘Q’, select ‘Film Simulation’ and apply your desired filter. You can customize the look of your images even further with grain, adjusting clarity and color depth, sharpness, white balance and so on, all without having to transfer your files to another device or third-party software.

Whilst we’re on that note, we need to mention how easy it is to move files between your camera and a smartphone or tablet. Although the initial setup was a bit glitchy with error messages (It’s not often anything connects on the very first attempt!) once you’re up and running with the Fujifilm Camera Remote App (opens in new tab), it couldn’t be easier to both control the device, and transfer your files over. Two clicks and you’re done!

Our least favorite thing about this camera is the battery life which is CIPA rated at 380 shots, about average. Whilst we would love to say that you can get more out of it in real life, we found the battery drained noticeably quicker than other cameras at this level. Saying that the batteries are tiny and light, so carrying spares on a long day of shooting shouldn’t be an issue.

Image transfer between the X-T30 II and a smartphone/tablet with the Fujifilm Camera Remote App couldn’t be easier (Image credit: Tantse Walter)Should you buy the Fujifilm X-T30 II?

The Fujifilm X-T30 II is a stylish and simple-to-use mirrorless camera that can help to produce stunning, color-rich images. You can unleash more power and creativity the further you delve into the menu and settings.

It sits at an affordable price point compared to other comparable models and has very quick and accurate autofocus.

We wouldn’t recommend it for astro shooting as it does struggle somewhat in low light, and unless you memorize which dial is which, they are impossible to see in the dark. For day-to-day shooting, travel photography, street photography and landscapes it’s ideal, and it’s a no-brainer for those wanting to shoot creative films or documentaries.

If this product isn’t for you

This is an entry-level mirrorless camera with great features which produce excellent image quality. A comparable but slightly cheaper camera would be Canon’s Rebel SL3/250D, however the X-T30 II ‘wins’ with more megapixels, more autofocus points, a better ISO range, more connectivity options and a higher max burst shooting speed. Where Canon excels is with the articulated screen, a wider choice of lenses and a much, much better battery life.

If the retro look is your bag and image sensor size isn’t important then take a look at the Olympus OM-D E-M10 Mark IV (opens in new tab). Although it has a much slower FPS rate, this has 21 scene modes (versus 18), the same level of connectivity options and has 5-stop in body image stabilization, something the X-T30 II is lacking and relies upon lenses for.