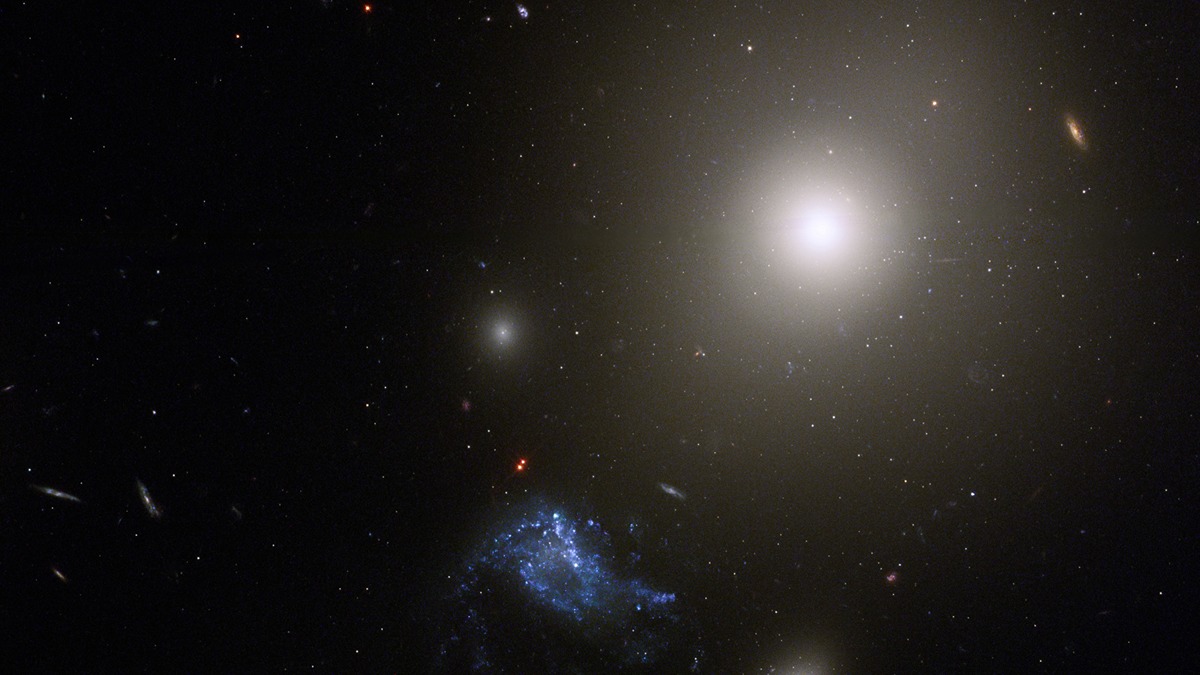 The Hubble Space Telescope has captured a dazzling new view of a busy star birth factory.

The oddly shaped Minkowski’s Object, a dwarf galaxy, glows in blue toward the bottom left of the image, while the elliptical galaxy NGC 541 shines brightly in the upper right. Minkowski’s Object is bursting with stars, containing at least 20 million stellar objects, and it has been greatly influenced by its larger neighbor, NASA officials wrote in a statement (opens in new tab) when releasing the new Hubble Space Telescope image on May 23.

“The radio jet from NGC 541 likely caused the star formation in Minkowski’s Object,” NASA officials said in the statement. This jet pushes against gas surrounding the galaxy, compressing the gas until the molecules become energized, or ionized.

“As the ionized gas reverts from its higher-energy state to a lower-energy state, energy leaves the cloud in the form of radiation,” NASA added. “As the clouds cool, they collapse, giving rise to star birth.”

NGC 541 is an elliptical galaxy that was likely created from a merger of two other galaxies, the agency said. The galaxy’s radio jets were picked up by telescopes, showing that the streams emerge from an accretion disk surrounding a black hole in the center of the galaxy.

The radio activity was likely triggered by debris from nearby mergers, NASA said. All in all, the busy area was one reason Hubble was tasked with looking at the region to better understand the conditions under which star formation is triggered.

Both Hubble and a successor telescope, the James Webb Space Telescope, are engaged in better understanding how galaxies and stars form. Webb’s larger mirror and deep-space location will allow it to look at some of the universe’s first galaxies, once Webb finishes commissioning this summer.

Webb’s research on galaxies will look at topics such as mergers, collisions, supermassive black holes and galactic types, according to NASA (opens in new tab).

« I tried Google’s text-to-image AI, and I was shocked by the results » 4 hostile alien civilizations may lurk in the Milky Way, a new study suggests