Hunt Showdown Tips For Beginners: How To Survive In The Haunted Bayou

Hunt Showdown is an unforgiving game that can feel intimidating to new players. Borrowing from genres like survival-horror and extraction royale, Hunt Showdown is the ruthless end result you’d expect from such a blend. The “get in, get loot, get out” gameplay loop of games like Escape From Tarkov and Vigor are made that much more petrifying when you’re dealing not in building supplies and crafting materials, but the dropped trophies of massive monsters. But with a bit of guidance, your trek across the haunted bayou can be made more welcoming–to a degree, anyway. Here are our tips for surviving and thriving in Hunt Showdown.

Play all three phases of the tutorial

This one should be obvious, but you’d be surprised. The tutorial in Hunt comes in three difficulty modes, though the content itself doesn’t change much on the surface. But don’t let that mean you play it once and head into a live competitive round. Play the tutorial at each difficulty for two reasons.

First, because you’ll earn Blood Bonds each time and you can spend those on things like hunters and weapons. But perhaps more importantly, you’ll get a better feel for how tough the game can really get sometimes. On the lowest difficulty, the monsters in your tutorial won’t really reflect just how sponge-like and vicious they’ll be in a live round.

Understanding the many menu options

Hunt Showdown is an exciting game once you’re in the bayou, but both the early onboarding and array of menus in between rounds can be dizzying. It took us a while to grasp it all, so if you’re feeling confused too, don’t fret. Here we’ll go over a glossary of terms, in brief, to help you understand what you’re looking at when it comes to things like Legendary Hunters, Blood Bonds, and the in-game economy.

Your Bloodline is your over-arching career rank. With each new level, you’ll unlock access to new in-game items that you can include in your loadouts. There’s also a prestige system for players who climb to Bloodline rank 100.

This displays your available characters. Until Bloodline rank 11, your characters will return to your roster upon death. From rank 11 onward, dying on a hunt will result in permadeath of your characters. Each Hunter has their own rank (1-50) separate from your Bloodline. Playing well with Hunters results in new upgrades becoming available, like a typical skill tree you may be used to. It’s possible–and encouraged–that you build different Hunters for different scenarios, bosses, or team sizes.

Here you can recruit more randomly-generated hunters. Each comes with their own loadout of weapons and items that you can customize, and each costs a variable number of Hunt Dollars, the in-game currency rewarded for completing tasks and leveling up. You can also choose the “Free Shuffle” button to generate a new set of randomized hunters, including a totally free hunter.

There are two in-game currencies in Hunt Showdown. In the main menu, the white currency is Hunt Dollars, and you’ll earn these by performing tasks and leveling up. This is the main and most important currency in the game as you’ll use it to buy new guns, healing items, ammo, and more in between rounds. Remember that from Bloodline rank 11, anything in your inventory during a hunt is lost upon death, so while it may be good to buy in bulk, you don’t want to bring everything you’ve got on a hunt. Take only what you expect you’ll need, and remember that more supplies can be found around the map. Blood Bonds, the red currency, can be purchased for real money and unlock legendary items, which we’ll go over in more detail next.

Legendary Hunters and weapons can be purchased with Blood Bonds. While legendary weapons look fancy, they are merely reskinned versions of standard weapons in the store–or perhaps already in your inventory. Some of them do include attachments you might not have yet, but other than their visual stylings, there is no legendary weapon that can’t be duplicated for free. 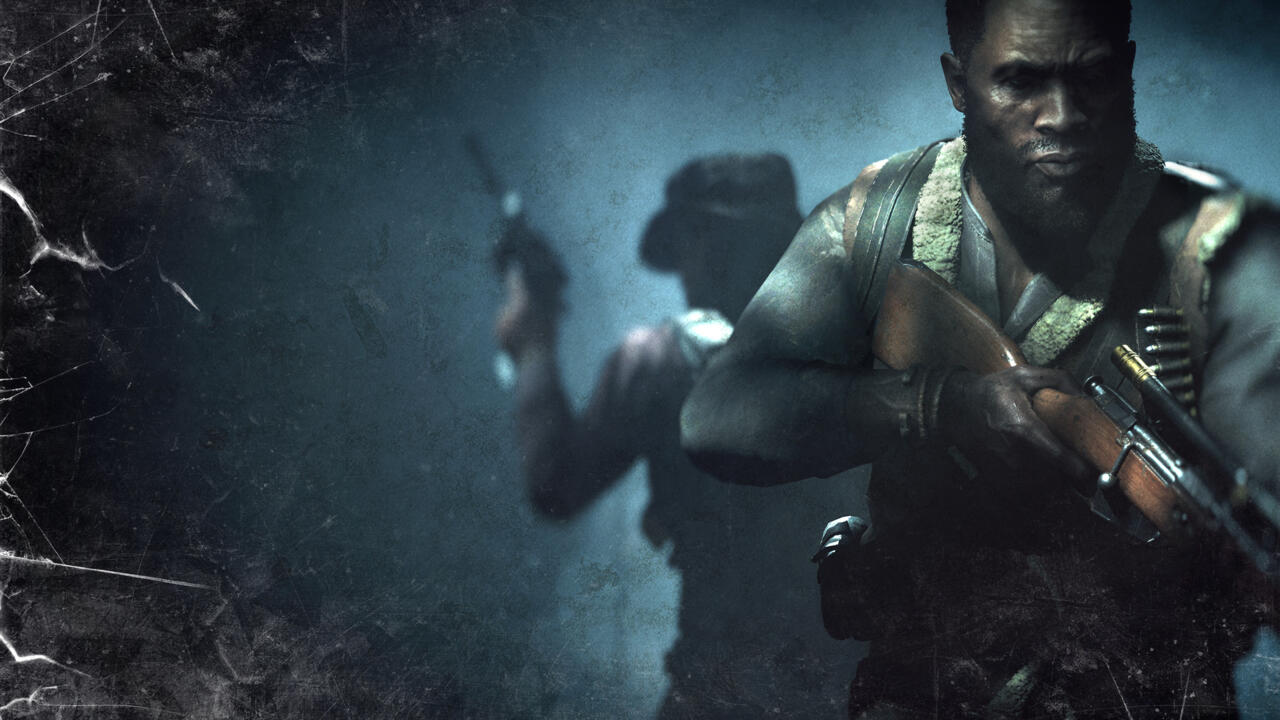 Legendary Hunters are for players who want to look a certain way on their bounty hunts.

Legendary Hunters work in a similar way. You are essentially buying a particular character skin, though they also come with the added bonus of immediately available upgrades, the likes of which you’d need to slowly unlock if you’re playing as a randomly spawned Hunter. While legendary Hunters and weapons are still subject to the post-level 10 Bloodline permadeath system, you will not need to rebuy them with Blood Bonds. You can always recruit a legendary hunter or purchase a legendary weapon over and over for Hunt Dollars after the initial purchase with Blood Bonds.

The Book of Monsters of Hunt Showdown is full of grotesque (and admittedly wonderfully designed) creatures. Each monster has its own abilities and weaknesses. It’s extremely important you get familiar with each of them. There are 12 monsters in all, including four bosses, six regular monsters, and two “packs” of monsters that travel in numbers. Below you’ll find a quick list of each of them. In a follow-up guide, we’ll be breaking down each monster’s stats, strengths, and weaknesses, so stay tuned.

Bring a friend or two

There are two main modes in Hunt Showdown: Quick Play and Bounty Hunt. If you’re playing alone, you should stick to Quick Play, which, despite its name, is actually built to be the solo mode. Those in a group of two or three hunters should instead load into a proper Bounty Hunt, the game’s main attraction. Playing with allies means longer and likely more eventful sessions. It also means that dying isn’t necessarily the end of your hunt, which is helpful when you consider just how often you’ll die in this game.

Stay stealthy for as long as you can

Lots of games are advertised with phrases like “play your way” and imply a guns-blazing player and a stealthy player each have their own ways to succeed. I’d argue Hunt Showdown is not such a game. In Hunt, to make noise is to carry a death sentence. Every shot fired is like a flare gun for other players or monsters roaming nearby. Given that you’re out in the virtual wilderness, gunshots echo across the wind. It’s simply bad news to fire a gun unless you really have to. Bring a silencer, resort to melee attacks as often as you can, and best of all, dodge a potential problem before it’s created. 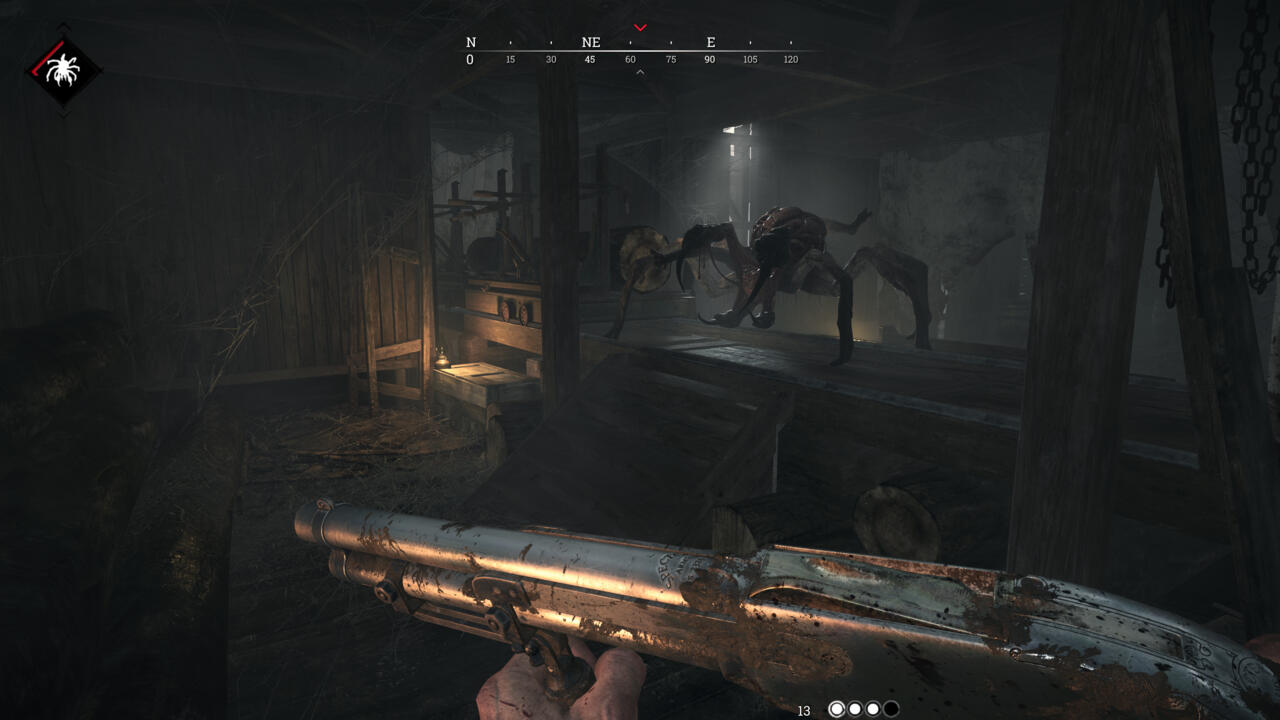 While many monsters will take getting used to, you pretty much know what you’re getting with the Spider boss.

Play with a headset

In line with the previous tip–and the next one–is to play with a headset if you have one. Hunt’s audio design is impressive, and with that comes reliability as a player. When you can hear the game well, you can start to learn about and trust what you’re hearing. Binaural audio will help you catch a sneaking enemy or listen for a nearby boss’ gurgles and growls. If you don’t set yourself up with an environment conducive to catching predators, you’ll soon become their prey.

The open world of Hunt Showdown feels carefully considered in its design. Well-considered entry points, shortcuts, and high-low advantages combine to make you think carefully about every step through the atmospheric hunting grounds. Vast woodsy areas are broken up by intricate villages and unnerving factories.

But the most affecting aspect of the world is arguably the various hazards you’ll encounter. Hellhounds barking in cages, half-eaten horses calling out for help, and broken glass and hanging chains litter the path between you and a boss. Give these hazards a wide berth. They often behave like sensor alarms. Get too close and you’ll set them off. Keep your distance.

Camping won’t save you

Like in Tarkov and other extraction royale games, the threat of losing everything is everpresent in Hunt. There’s no gentle way to say this though: Camping is never the answer. If you’re not moving toward the boss or gathering supplies, you’re simply wasting your time in the bayou. Other players aren’t going to wait for you to find the courage to advance, so you just have to do it–cautiously, using our stealth tips above.

The boss tokens that make up each player’s main objective are in very short supply, so even if you survive a round, you’ll be leaving pretty much empty-handed. Hunt expects risk-takers and invites the indecisive to find another hobby.

Pounce on enemies after they’ve won a close battle

The PvP element of Hunt is the most unpredictable aspect of a round, naturally. Even if you think you’ve got the game’s various monsters under your thumb, it’s the other living players who can so easily throw a wrench in your plans. Stay a step ahead of enemies by picking your battles carefully. Namely, be the third party after a costly battle. When you see two players (or teams) duking it out, be patient until one of them prevails, then jump into the fray and finish off the likely wounded hunters.

As with the PvE, not every battle is worth fighting, but pouncing on a player who is already hurting is a great way to clear a lobby of threats to your bounty. 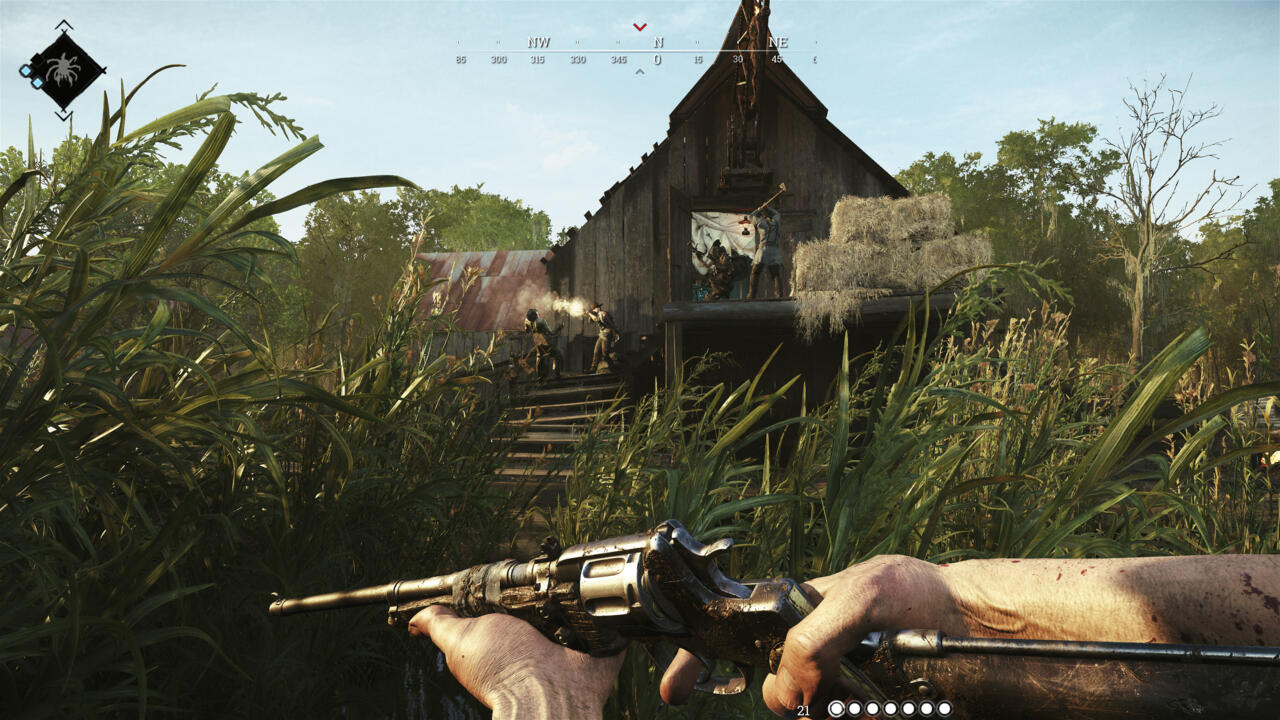 Don’t be the player caught in a tough firefight. Be the opportunistic one who cleans out the wounded survivors.

Have an exit strategy

As soon as you’re given control of your character in a hunt, you can open the map and view the possible extraction points. Each map will have a few of them, so keep them in mind as you pick up clues revealing the boss location. It’s possible the nearest exit isn’t ideal, as players may be lying in wait to jump you after your boss battle. Think like a hunter and consider which exit may ultimately be safest, not just closest. If you have to cross large bodies of water, you’ll move slowly. If you need to move across an open field, you won’t have a lot of cover. An indirect route to the exit is going to be the safest a lot of the time because it’ll keep you unpredictable in the minds of your foes.

Dark Sight serves different purposes at different phases of a round. In the early portion, Dark Sight will vaguely point you toward clues–which end up looking like nests on the ground in randomized spots around the world. After collecting three clues, you’ll have the boss’ location for that round. As you near the boss, use Dark Sight again and watch the light pointing toward the boss. If it’s accompanied by quiet whispers and a blueish-white light, you’re the only hunter nearby. If the whispers are loud and the light red, you’re not alone, so act accordingly.

Once you’ve collected the boss token, your Dark Sight will offer a few short seconds of a very special ability: You’ll be able to sense nearby enemy players. you should use this very sparingly, almost like blinking, which will give you the edge over oncoming hunters as you make your way to the exit.