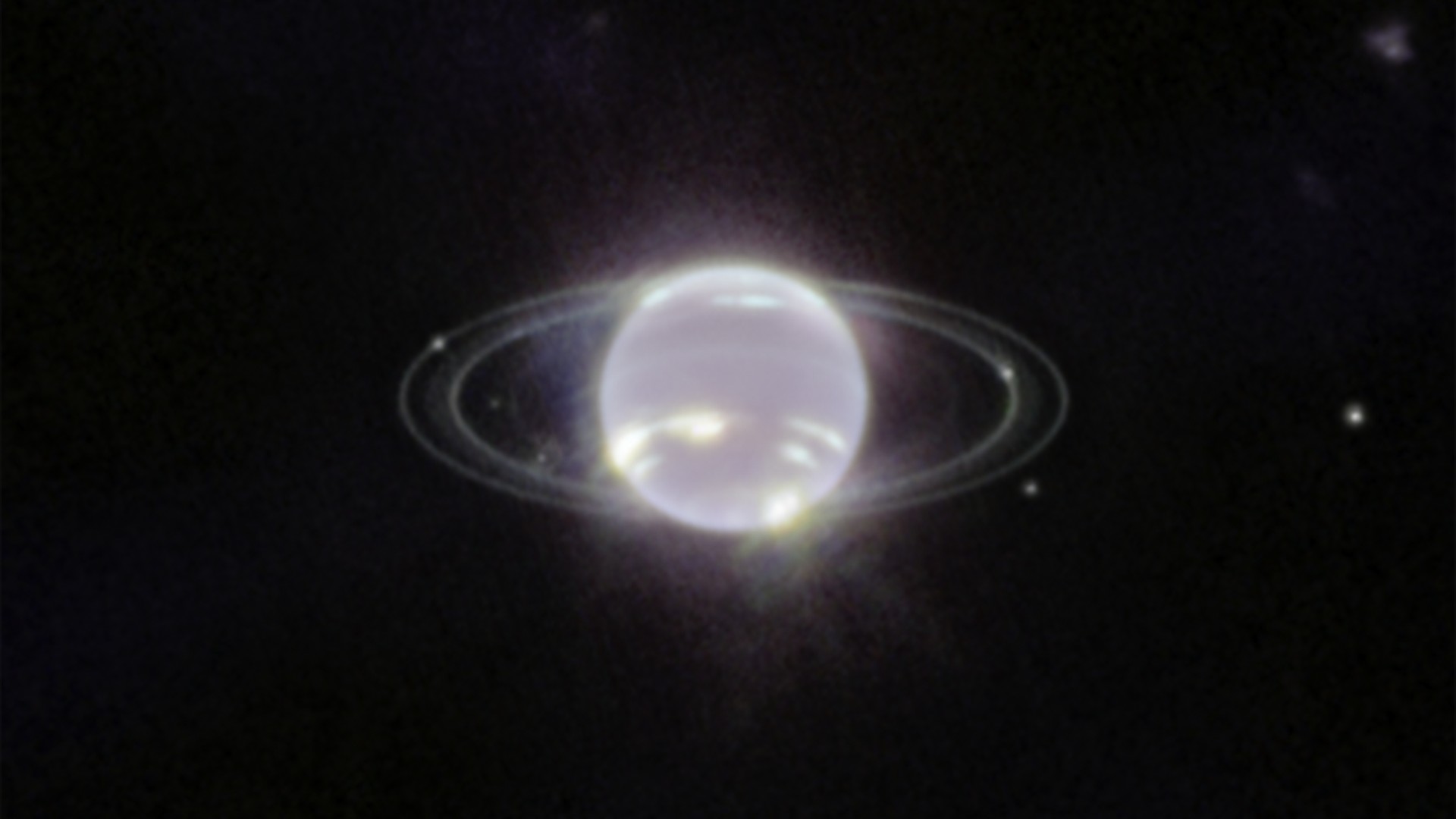 The James Webb Space Telescope (JWST) has captured its first image of the solar system ice giant Neptune, revealing the planet in a whole new light.

The image gives astronomers their best look at Neptune‘s icy rings for 32 years, since the Voyager 2 spacecraft flew past the planet on its way out of the solar system. “It has been three decades since we last saw those faint, dusty bands, and this is the first time we’ve seen them in the infrared,” Heidi Hammel, a planetary scientist at Association of Universities for Research in Astronomy (AURA), said in a statement (opens in new tab).

Excitingly, in addition to the previously known bright, narrow Neptunian rings, the new James Webb Space Telescope image also shows some fainter dust rings around Neptune that even Voyager 2’s up-close-and-personal visit to the planet in 1989 couldn’t reveal — rings that scientists have never seen before.

What appears to be missing from the JWST Neptune image is the characteristic blue color that has come to be associated with the ice giant from photos taken by the Hubble Space Telescope.

Another prominent feature seen in the JWST image is a series of bright patches in Neptune’s southern hemisphere. These represent high-altitude ice clouds in the ice giant’s atmosphere reflecting sunlight before the methane in the clouds absorb it. JWST’s image also highlights a continuous band of high-latitude clouds surrounding a previously-known vortex located at Neptune’s southern pole.

A thin and faint line of brightness can also be spotted circling the planet’s equator which may indicate the global circulation of Neptune’s atmosphere driving winds and storms across the ice giant.

The image also shows something intriguing at Neptune’s northern pole. At this point in Neptune’s 164-Earth-years-long orbit around the sun, its northern pole is just out of view from the JWST’s position almost 1 million miles (1.5 million kilometers) from Earth. Yet, the most powerful space telescope ever created has still managed to spot an intriguing brightness in the region of Neptune’s north pole.

The JWST images also provide scientists with a look at seven of Neptune’s moons. In particular, just above the ice giant in the zoomed-out version of its view of Neptune is a bright point of light that represents the moon Triton. This Neptunian moon is coated by a frozen layer of condensed nitrogen and appears so bright, outshining the methane-darkened Neptune, because it reflects around 70% of the sunlight that falls on it.

In this version of Webb’s Near-Infrared Camera (NIRCam) image of Neptune, the planet’s visible moons are labeled. Neptune has 14 known satellites, and seven of them are visible in this image. (Image credit: NASA, ESA, CSA, and STScI) (opens in new tab)

At a distance from the sun that is 30 times that distance between Earth and our star, Neptune may seem distant. But, this is a cosmic stone’s throw in comparison to the galaxies and stars billions of light-years away that the JWST has been tailored to observe.

The Neptune image further demonstrates that even though the JWST was created to view extremely distant cosmic objects, looking back in time to the universe as it existed billions of years ago, it is still delivering important and ground-breaking results from inside the solar system.

« September’s Xbox Update Is Out Now With Color-Changing Xbox Button, Revamped Library, And More » How to automatically change your Slack status when you have a meeting