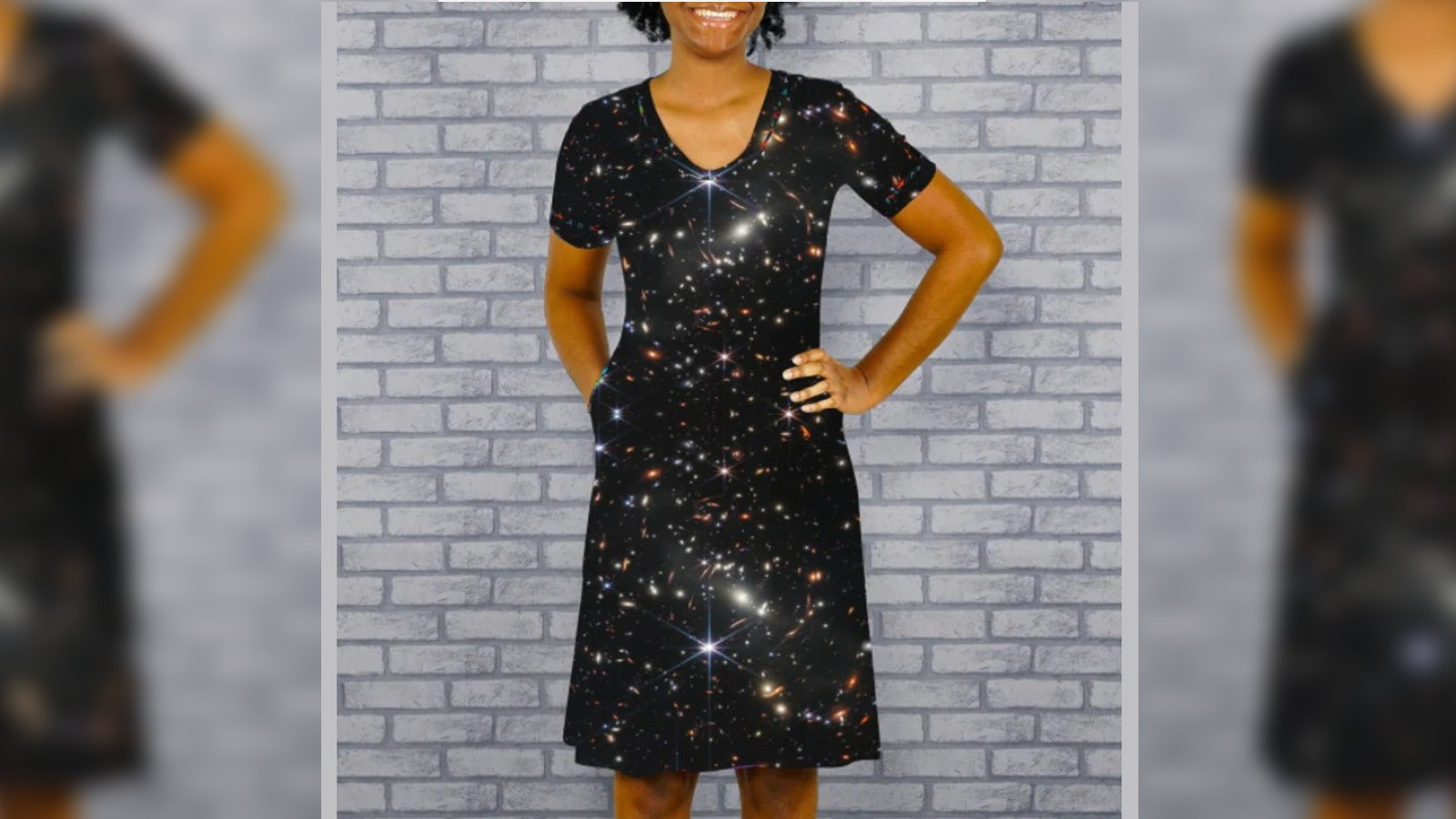 The clearest and most detailed image of the distant universe ever taken, captured by NASA’s James Webb Space Telescope (JWST), was released on July 11, 2022.

This image, dubbed Webb’s First Deep Field, captures a scene brimming with the oldest galaxies scientists have ever seen. Now, this groundbreaking image is being celebrated through fashion.

Since the grand reveal of JWST’s first science-quality photos, astrophysicists have gained valuable insight into what some of the universe’s earliest stars and galaxies looked like. Instantly becoming a new favorite image for many around the world, the full-color, infrared First Deep Field photo freezes a moment in the early universe — specifically, the SMACS 0723 galaxy cluster. Its irregular, glinting galaxies form captivating artwork, which one company has transformed into a delightful, galactic dress.

In a project combining its two passions — science and clothing — fashion brand Svaha has launched a new JWST-themed collection, including a dress, top and cardigan. The cotton material of each of these items is fully covered with NASA’s image, representing just a small speck of outer space in mesmerizing detail.

The JWST dress was highly sought after by Svaha customers, according to the brand. “As soon as NASA released the photo, our social media was flooded with requests from our customers to capture the image on a dress,” Svaha founder and CEO Jaya Iyer said in a statement (opens in new tab).

“The image is just so beautiful; we just had to do it! So, we created these beautiful designs so that people can wear them and own a piece of history!” Iyer added.

Before the JWST, its preceding pioneer the Hubble Space Telescope had a more limited spectrum of infrared wavelengths that it could observe in the universe, according to NASA’s Webb vs Hubble comparison page (opens in new tab). On board the JWST, which launched in December 2021, is an instrument called the Near-Infrared Camera (NIRCam).

The infrared sensors on NIRCam allow the telescope to peer further into space than ever before. To create the pattern displayed on the dress, the light that reached the telescope took so long to enter the solar system that the resulting shapes represent the universe when it was less than a billion years old.

So as to exactly replicate these sharp details and true proportions, the popular JWST image was digitally printed onto the dress’ fabric (95% cotton and 5% lycra). Its style includes short sleeves and a knee-length, flared skirt with pockets sewn into the waist for practicality.

The NASA design covers the entirety of the dress, as the photo is duplicated on both the top and skirt section, mirrored near the waistline. This aspect shows off the impressive image to both the observer and wearer, providing an upright image on the skirt when looked down upon by the latter.

Iyer originally launched the Svaha brand to merge fashion and STEAM (science, technology, engineering, art and math), with one of the goals being to eradicate the idea that people have to choose between feminine clothing and science themes.

Each of the items in the Webb’s First Deep Field clothing collection have been produced in sizes from XS to 5XL. Available for pre-order on the Svaha USA website (opens in new tab), the dress is priced at 79.99 USD, with the cheaper top and cardigan being sold for 44.99 USD each. For those who pre-order these dresses, they are due to be shipped to customers before the end of September 2022.