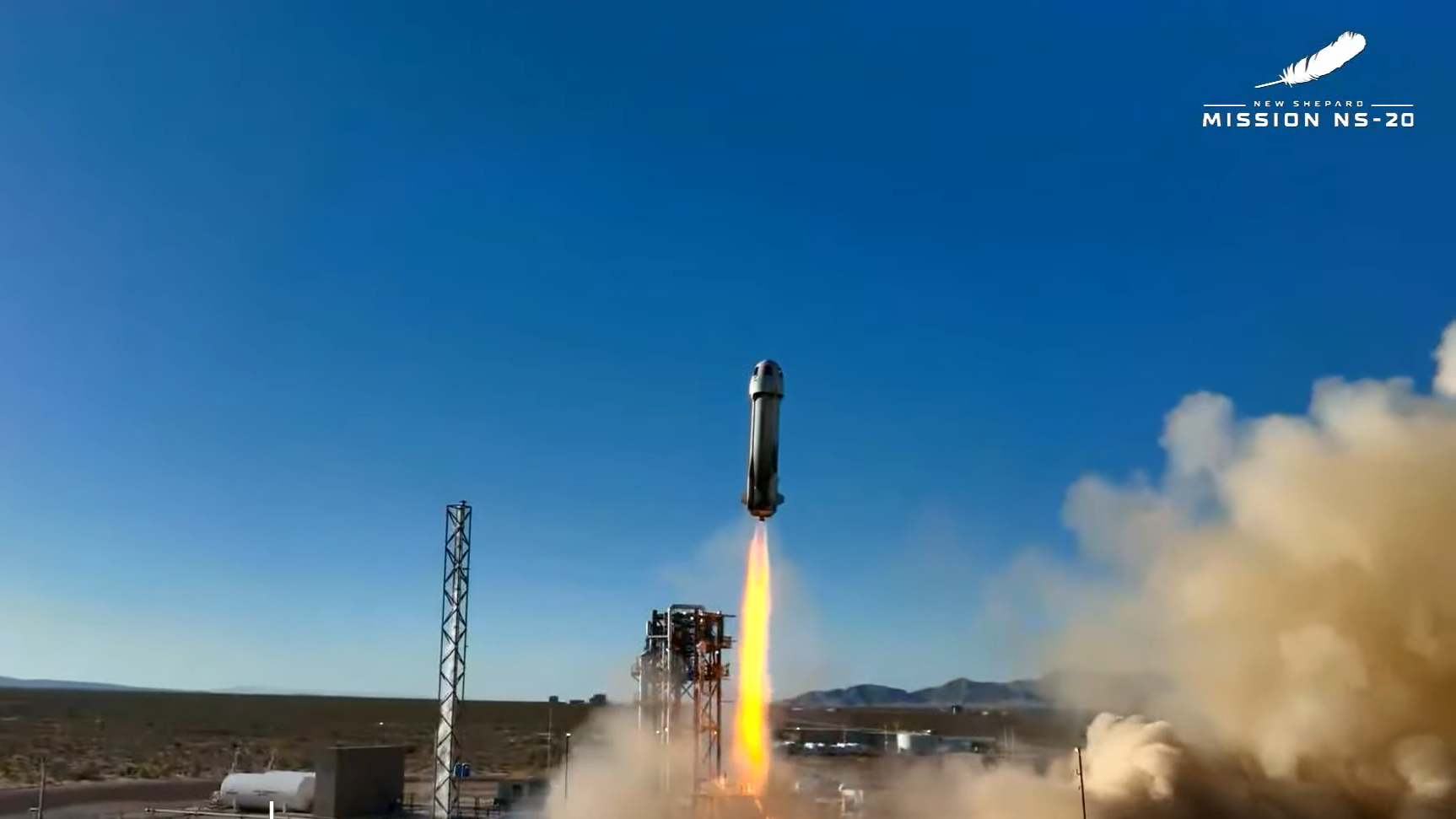 Blue Origin’s fourth crewed spaceflight is in the books.

A New Shepard vehicle lifted off from Blue Origin’s Launch Site One in West Texas on Thursday (March 31) at 9:58 a.m. EDT (1358 GMT), carrying a crew of six people to suborbital space. Just about 10 minutes later, those folks came back down to Earth, their capsule raising a plume of dust as it touched down in the desert.

“It’s the most beautiful thing I’ve ever seen,” passenger Sharon Hagle said on exiting the capsule.

Their mission was called NS-20, because it was the 20th spaceflight of a New Shepard vehicle. But it was just the fourth crewed Blue Origin flight, and the first that didn’t feature a celebrity passenger.

NS-20 was supposed to continue this pattern, with “Saturday Night Live” star Pete Davidson initially signing on to fly. But Davidson backed out after the mission was delayed, for unspecified reasons, from March 23 to March 29. (The flight was delayed again, to Thursday, because of predicted high winds at Launch Site One over the previous two days.)

Davidson’s seat was taken by someone with a very special connection to NS-20 and the vehicle that flew it — longtime Blue Origin employee Gary Lai, the chief architect of the New Shepard system.

“I don’t know that I could even, [that] words could do that justice. You just have to feel it,” Lai told Blue Origin employee Sarah Knights after exiting the capsule. Knights, known as “Crewmember 7” guided the astronauts throughout their flight preparations.

Lai was joined on NS-20 by five paying customers: businessman and angel investor Marty Allen, the former CEO of Party America; Sharon Hagle, founder of the education nonprofit SpaceKids Global; Marc Hagle, president and CEO of the property-development company Tricor International (and Sharon’s husband); entrepreneur Jim Kitchen, who since 2010 has taught at the University of North Carolina’s Kenan-Flagler Business School; and George Nield, the president of Commercial Space Technologies, LLC.

Kitchen, a lifelong adventurer, apparently set a record with Thursday’s flight: He’s the first person ever to visit space and all 193 countries recognized by the United Nations, Blue Origin representatives said.

“That is an eternal black,” Kitchen said upon exiting the capsule of his view of space. “It’s just breathtaking.”

Nield’s name may be familiar to space fans. From 2008 to 2018, he served as associate administrator for the Federal Aviation Administration’s Office of Commercial Space Transportation. And from 1987 to 1994, he managed the Flight Integration Office for NASA’s space shuttle program.

“Pictures don’t do it justice,” Nield said. “Just an amazing trip, the thrill of a lifetime.”

It’s unclear how much Allen, the Hagles, Kitchen and Nield paid for their seats on Thursday’s flight; Blue Origin has not disclosed its ticket prices. (Lai apparently flew for free, as Davidson would have; Blue Origin doesn’t seem to charge its celebrity passengers.) For some perspective: The company’s chief competitor in the suborbital space tourism business, Richard Branson’s Virgin Galactic, currently charges $450,000 per seat.

Like Blue Origin, Virgin Galactic has four crewed spaceflights under its belt. But so far, all of Virgin Galactic’s flights have been test missions; Branson’s company has not yet begun full commercial operations. That milestone is expected to be met later this year, after technicians finish maintenance work on Virgin Galactic’s VSS Unity space plane and its carrier aircraft, VMS Eve.

Unlike the piloted Unity, New Shepard is an autonomous system. The New Shepard rocket comes down for a vertical, powered landing shortly after liftoff, and the capsule floats back to Earth a few minutes later, relying on parachutes to slow its descent. New Shepard passengers experience a few minutes of weightlessness and get to see the curve of Earth against the blackness of space.