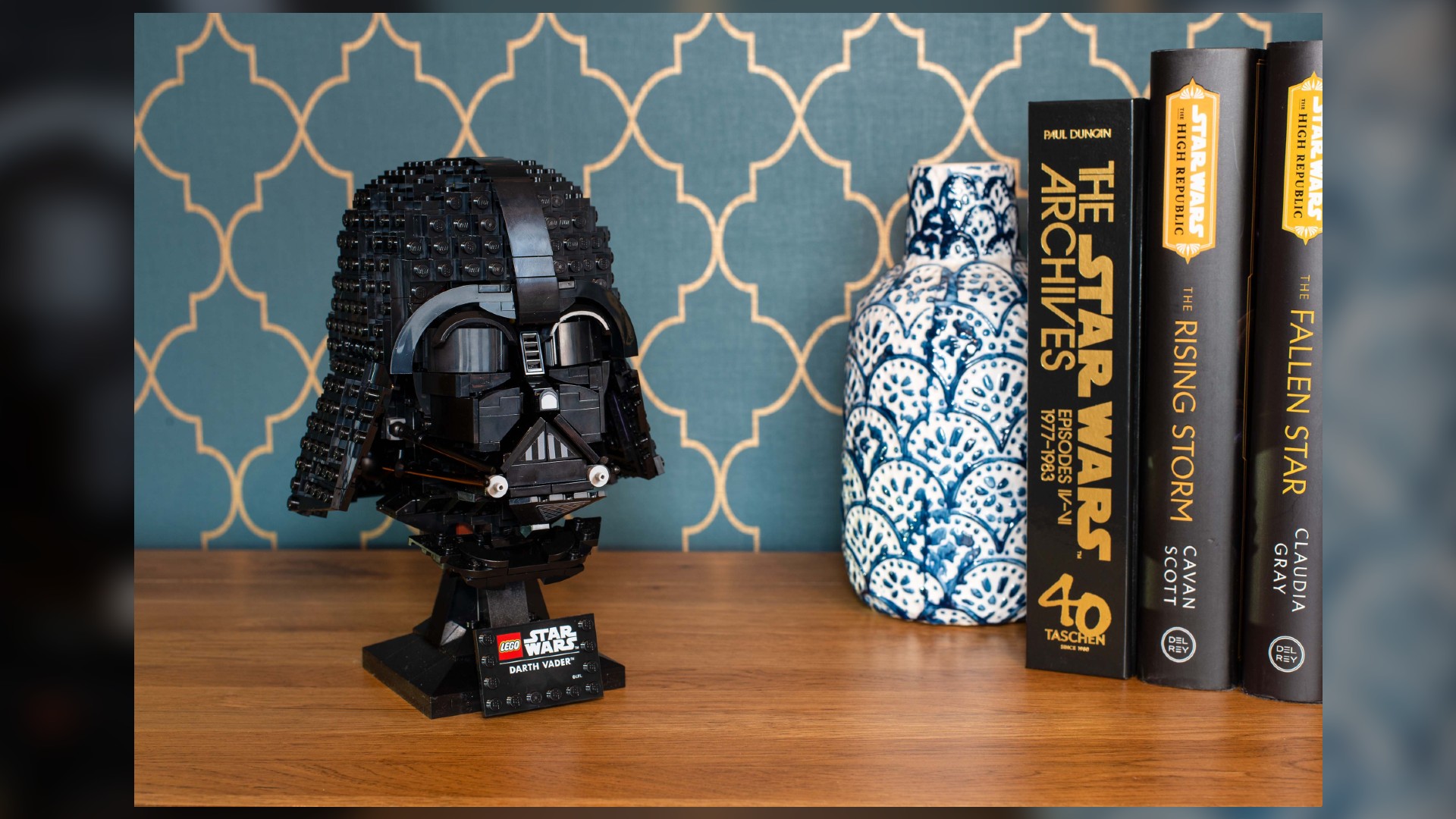 The Lego Star Wars Darth Vader Helmet poses a formidable presence, even without the chilling sound of air being forced through the host’s life-support system. Such is the accuracy of the build and its clever construction, you might begin to wonder if Vader’s sorcerer’s ways had a hand in Lego’s creation.

If you’re always on the lookout for good Lego Star Wars deals, the menacing helmet boasts over 100 pieces more than the second largest helmet set, the TIE Fighter Pilot, and contains a whopping 363 more bricks than the smallest set, the Scout Trooper. This additional brick real estate does come with a larger price tag, but still results in a very respectable price per brick ratio of $0.84/£0.72.

There are some enjoyable building techniques on offer here and although construction shouldn’t prove overly tricky for Jedi Masters and Sith Lords, Padawan’s may lack the attention or interest to see this minifigure-free set through to completion.

The very latest Lego Helmet wave, released in February 2022, included the Luke Skywalker (Red Five) Helmet alongside The Mandalorian’s distinctive chrome dome. These represent a slight departure given that every helmet prior belonged to, or was affiliated with, the Galactic Empire. If you already own a Lego Star Wars helmet then Darth Vader will fit right in. And, if you’re a low-key Sith fan looking for one of the best Lego Star Wars sets to adorn your desk, this could be the ornament you’re looking for…

The Darth Vader Helmet comprises 834 pieces, making it the largest Star Wars helmet currently available. The additional bricks and all-black exterior makes this arguably the most challenging lid to build from a galaxy far, far away. A keen eye is required when searching for the right brick and if you’re not paying attention, it’s possible to plump for a similar-looking but wrong alternative. Thankfully, Lego has minimized the margin for error as much as possible by using bricks of various colors for the internal structure.

The more challenging build and lack of playability is why all Star Wars Helmets carry an 18+ rating and Darth Vader is no exception. Even when supervised, younger builders may still struggle with the intensity of the construction process and long for a Darth Vader minifigure instead. But that’s not to say a mom- or dad-built helmet wouldn’t make a nice addition on a child’s bookshelf.

The build process is split into five bags. You begin with the base and neck, before progressing onto the lower half of the mask. The eyes and internal structure beneath the dome come next, then the dome itself, and finally the neck guard.

Lego has done a good job of spreading out the construction of the internal framework, which helps maintain interest as the exterior steadily progresses. Just like the Boba Fett Helmet, the internal structure is largely made up of SNOT bricks (studs not on top), allowing studs to be positioned at a 90-degree angle to help produce the spherical curvature of the dome.

Vader’s jaw, lip at the base of the neck, and neck guard all make great use of U clips to achieve accurate angles. The jaw is particularly impressive, with a knight’s lance and a bar attached to a ball socket used to accurately convey contouring.

This model took us just under three hours of none-stop building at a brisk pace and, bar a little time spent deciphering a couple of awkward isometric diagrams in the instruction booklet, the build went smoothly and time flew by.

Once built the core construction feels sturdy, but the eyes are only attached via a Clip Mechanical Claw and the neck lip is delicate enough that both are prone to coming loose when the helmet is lifted. However, once displayed there’s no real reason to touch the helmet, so it’s a problem that’s easily avoided.

The menacing kabuto-inspired aesthetic of Darth Vader’s helmet is etched into the minds of many, making it one of the most well-known props in cinema history. But, however recognizable the Dark Lord’s lid may be, its many angles and curves are much harder to replicate than, say, the Scout Trooper or Boba Fett helmets. Kudos to Lego then for admirably replicating the source material’s devilish dimensions. You only need to look as far back as 2019’s Darth Vader Bust (75227) to see how far Lego has come.

It’s a shame then that the included sheet of four stickers falls short. We found ours crumpled at the bottom of the box and as a result the tip of one example doesn’t stick down properly. However, the bigger disappointment is how stickers are only provided for the top half of the triangular respiratory vent at the front of the mask. This results in what looks like two large front teeth (something that’s difficult to unsee).

It’s hard to conceive a practical reason for Lego’s omission, especially when it detracts from the otherwise stellar representation. Ideally, the vent would have been comprised of printed bricks, of which there are several on the Luke Skywalker (Red Five) Helmet. The only printed item on Darth Vader’s helmet is the placard piece.

The only other aesthetic inconsistency of note is the grey ball sockets either side of the mask. They’re not particularly prominent, mostly hidden by the neck guard, but they’re sometimes visible when the helmet is viewed square on. When the rest of the helmet is almost entirely black it’s a shame these two pieces didn’t follow suit.

Should You Buy The Lego Star Wars Darth Vader Helmet?

Darth Vader is Lego’s biggest and most ambitious Star Wars Helmet to date. The lack of playability and challenging construction make it a hard sell for children, but older builders will have a blast putting it together. The curvature of the dome, angle of the neck guard, and tapering of the jaw have been faithfully replicated in Lego guise and it’s difficult to imagine how its form could look any better, given the size Lego had to work with.

This does, of course, make the respiratory vent stickers (or lack thereof) all the more frustrating. If you can get past the toothy appearance, Darth Vader’s helmet is a fine ornament that will look excellent adorning a minimalist office or Sith temple. If you’re planning to position it alongside other helmets in the collection, the Stormtrooper and Boba Fett helmets are just begging to flank the Dark Lord of the Sith.

If you’re not keen on joining the dark side, but don’t want to associate with rebel scum either, then check out the Lego Star Wars Boba Fett helmet ($59.99/£54.99). It captures the Book of Boba Fett’s bounty hunter protagonist’s likeness well and is a vibrant alternative to the limited color palette of most other Lego Star Wars Helmets.

If you’d rather pick up something to occupy a youngling then the Lego Star Wars Millennium Falcon might be a more suitable alternative. Apart from being one of the coolest spaceships in sci-fi, this sizable kit boasts a plethora of minifigures, a large interior and endless playability. At $159.99/£139.99 it’s also a fraction of the price of the huge UCS Millennium Falcon ($799.99/£699.99).