Mario Kart 8 Deluxe is Nintendo’s best-selling game on Nintendo Switch, so it seems like a no-brainer to offer more content for it. If anything, it’s surprising that it’s taken this long. But the success of the Fighters Pass for Smash Bros. Ultimate has seemingly resulted in the Booster Pass for MK8D, effectively doubling the number of tracks in the game over the course of several content drops. The first wave is now available and shows the enormous potential of regularly feeding kart-racing fans new content–even if it isn’t strictly new.

These are remastered tracks, borrowed from the series’ long history across a variety of console and handheld platforms. The results are inconsistent, but in a narrow band of quality from “very good” to “absolutely fantastic.” There are no real clunkers here, and even the weakest link in the chain isn’t all that weak.

That weaker track is Toad’s Circuit, a recreation of the 3DS Mario Kart 7 track. It’s well-made and straightforward, but it’s just a bit on the bland side. This is the type of track that would exist to introduce you to Mario Kart’s basic racing mechanics–wide thoroughfares, a few turns but nothing too sharp. It’s fine for what it is, but it doesn’t quite belong in a set designed for Mario Kart fans hungry for more tracks to master. It’s like buying a variety pack of gourmet ice creams and finding a container of vanilla. There’s nothing necessarily wrong with vanilla, and hey, ice cream is ice cream. But it’s a little boring compared to the rest.

Toad’s Circuit is also oddly placed as the second track in the Golden Dash Cup, so it doesn’t serve an introductory role. That position makes it more awkward, because it comes right after Paris Promenade, which is borrowed from the mobile game Mario Kart Tour, making it one of the most recent tracks. Tour is the odd duck of the Mario Kart family, having not attracted quite the same audience as much of the console series, but the track design is top-notch and this remaster approach will give Switch kart-fans a chance to see them. Paris Promenade in particular is lovely, with wide vistas, beautiful brickwork along the road, and landmarks like the Arc de Triomphe sitting alongside cute little touches like parked Vespas. It’s narrow enough and tight-cornered enough to present a real challenge even for karting experts.

The Tour tracks as a whole shine here, and it’s easy to see why they make up three of the eight new additions. They’re among the best-looking and most polished, to the point that many fans wouldn’t even know they aren’t just brand-new Mario Kart 8 tracks. They’re also the tracks that change most significantly between laps, which helps keep you on your toes. Mario Kart Tour generally shortened races to two laps instead of three, and this shifting track design maintains that spirit by keeping races from feeling repetitive.

This first wave delivers a nice dose of racing action and highlights tracks that were overlooked or have drifted into obscurity.

Sometimes the bustling track design is a little too busy for its own good, though. At one point I got stuck on some unusually enclosed geometry in Ninja Hideaway in such a way that it wasn’t easy to find my way out of, and when I did I ran into yet another boxed-in wall. Nintendo generally avoids designing track elements that could result in those types of dead ends, so this is a rare flaw.

The rest of the tracks are stellar. Shroom Ridge (from Mario Kart DS) is a traffic-laden street reminiscent of Toad’s Turnpike, but with banking mountainous curves that create a risk-reward element for using your slide to maneuver between the cars and trucks occupying the street. Sky Garden (from Mario Kart: Super Circuit) received the most significant facelift, from a simple flat sky-themed track to a beautiful mid-air location full of winding turns.

The biggest revelation for me, though, was Coconut Mall, a remaster of the track from Mario Kart Wii. This version of Mario Kart never stuck out in my mind–in part because it was following on the heels of the renowned Double Dash, and in part because Nintendo pushed its gimmicky Wii Remote steering wheel control scheme. But Coconut Mall shows that the track design, at least, was definitely not that game’s problem. With a creative concept, clever uses of the theme like the boost pads on mall escalators, and an appealing environmental switch into the mall parking lot, this is easily one of the best tracks in this first wave. 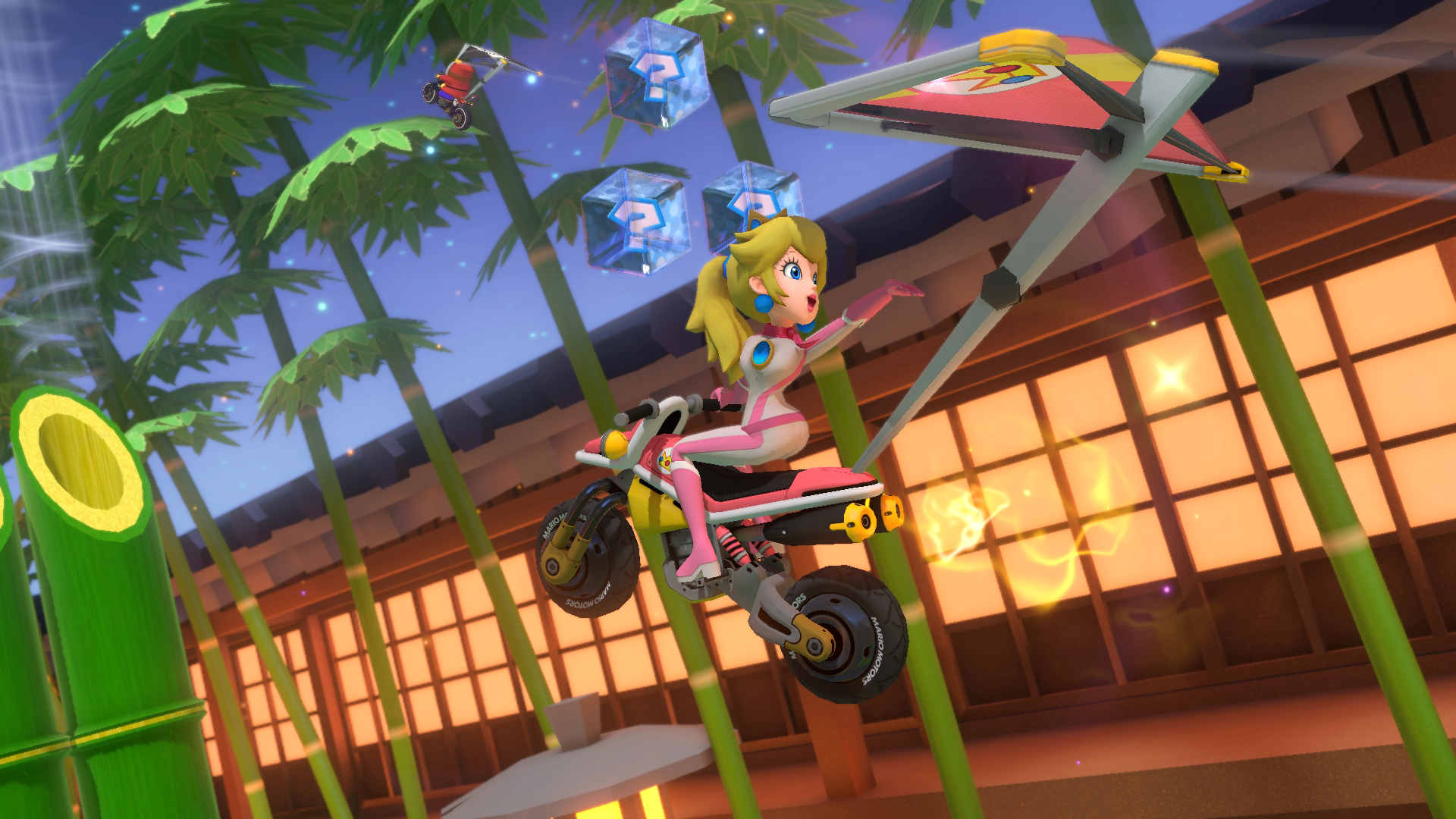 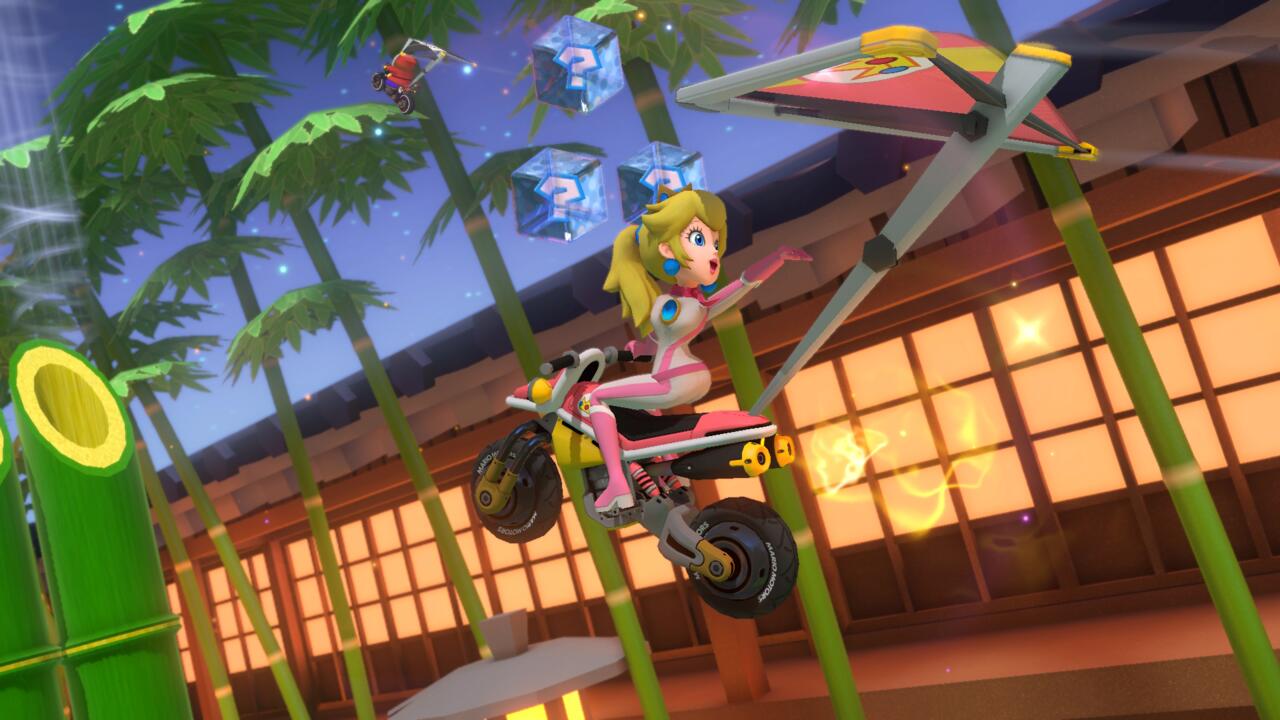 The one drawback of all this is that the Booster Pass is limited only to tracks. Nintendo has not announced any plans to introduce more racers, karts, wheel types, or gliders to the game. For the first new Mario Kart content in years, some new racers or karts would have been a nice addition. That distinction makes it not-quite analogous to the Smash Bros. Fighters Pass, which introduced new characters in addition to the new arenas.

That said, the Mario Kart 8 Deluxe roster is already massive, especially since it includes all of the DLC characters from the original MK8 release on Wii U. Many dedicated go-karters have probably picked their favorite character, so what they’re really looking for is new tracks to master. This first wave delivers a nice dose of racing action and highlights tracks that were overlooked or have drifted into obscurity. If this is the level of quality we can expect from the five remaining waves, the Booster Pass will serve as an excuse to dip back into Mario Kart 8 on a regular basis with new races to master. That’s all we ever really needed.