Moon bricks, space sutures and more: Meet the science SpaceX is flying to the space station this week 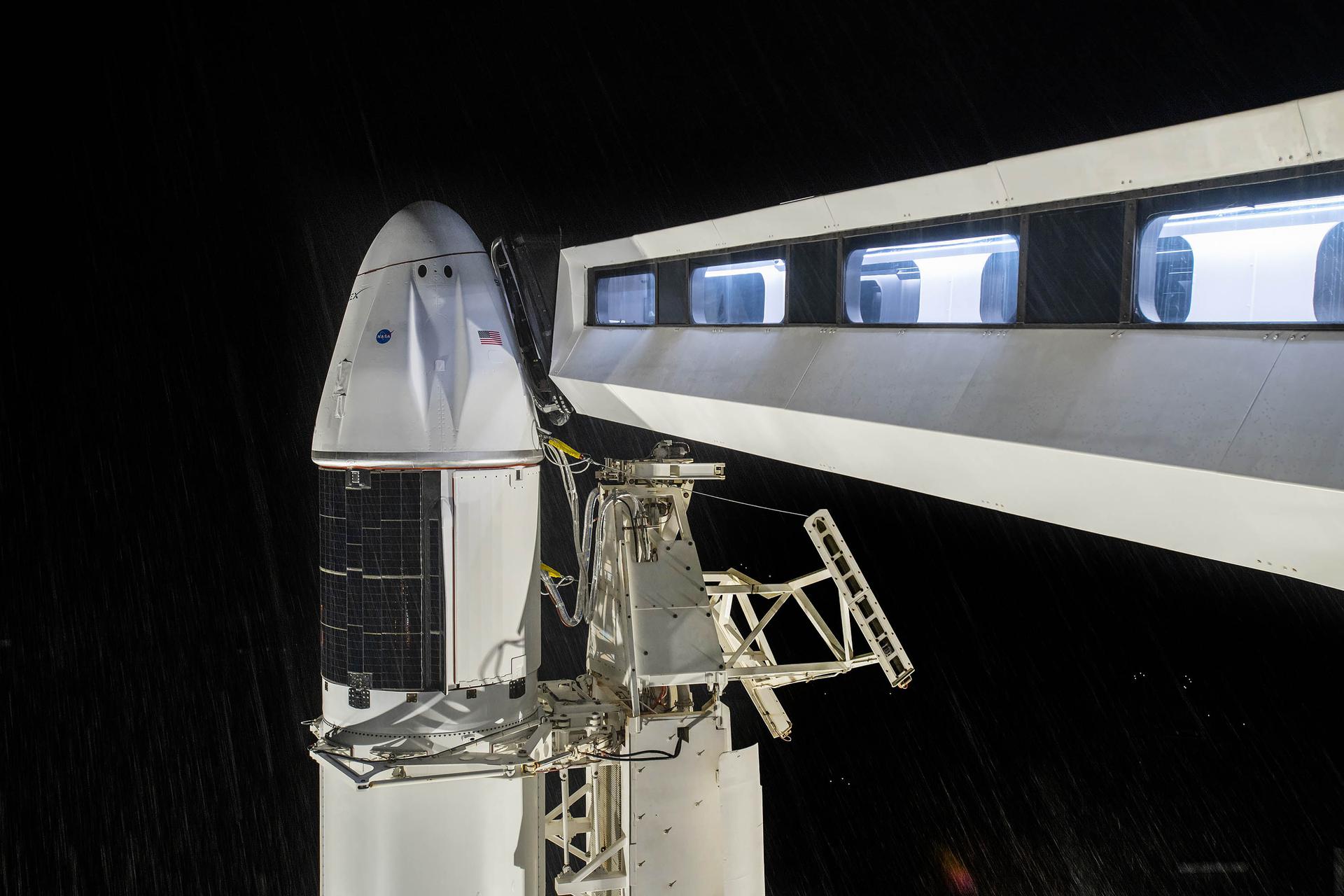 A lot of science gear will go up to the International Space Station this week on SpaceX’s 25th cargo resupply service mission to the orbital lab.

The uncrewed flight, known as CRS-25, will kick off on Friday (June 10), when a Falcon 9 rocket launches a Dragon capsule from Florida’s Cape Canaveral Space Force Station. The Dragon is packed with a variety of cargo and supplies, including a trove of science experiments.

Ranging broadly in their focus, the science headed to the International Space Station (ISS) includes investigations into immune system aging and recovery, global dust composition and its effect on the climate, how communities of microorganisms in soil are affected by microgravity, and more.

In a call with reporters on Thursday (June 2), NASA officials voiced excitement about the number of experiments headed to the orbital laboratory, as well as the increased ability of astronauts to conduct them.

For nearly a decade after the 2011 retirement of NASA’s space shuttle fleet, the agency was dependent on Russian Soyuz spacecraft to carry its astronauts to and from the ISS. The three-person Soyuz is always commanded by a cosmonaut and therefore can carry a maximum of two spaceflyers to the U.S. section of the station.

But more people — NASA, European and Japanese astronauts — can get to and from the U.S. section now, thanks to the success of SpaceX’s astronaut missions for NASA. The crewed version of Dragon is outfitted to carry four astronauts at a time, and SpaceX has now launched four operational crewed missions to the ISS.

“Since we’ve had four crew, and not too long ago five crew onboard ISS … we’ve been flush with crew time,” Kirt Costello, NASA’s chief scientist for the ISS program, said during Thursday’s briefing. “We’ve seen our ISS researcher sponsors respond and utilize all the time that’s available.”

Here’s a rundown of some of the experiments headed to orbit next week. You can learn more about them and other research flying on CRS-25 via NASA here (opens in new tab).

On Jan. 14, 2022, strong seasonal winds carried dust from northwest Africa over the Canary Islands, causing visibility to drop and air quality to decline. EMIT will measure the mineral composition of dust in Earth’s arid regions, creating a map that could improve understanding of how dust affects people and communities. (Image credit: NASA)EMIT

The Earth Surface Mineral Dust Source Investigation, known as EMIT, will spend the next year measuring mineral composition of dust in Earth’s driest landscapes. During Thursday’s briefing, Robert Green, EMIT’s principal investigator, explained what he referred to as the planet’s “mineral dust cycle.”

Dust blown into Earth’s atmosphere by high desert winds travels thousands of miles. The mineral content of this atmospheric dust affects the interconnected global climate system, and the composition of these minerals is key to discovering how. Depending on the minerals present, for example, atmospheric dust will absorb and reflect sunlight in different ways, heating or cooling areas, affecting cloud formation and atmospheric chemistry. This type of dust can also serve as a rich nutrient deposit when it settles in the ocean or on land.

Right now, according to Green, there are only a total of 5,000 mineral samples from Earth’s global dust cycle in scientists’ hands. EMIT aims to leave that number in the dust. The EMIT module is loaded in Dragon’s trunk on CRS-25, and it’s the mission’s largest payload. Once Dragon reaches the ISS, EMIT will be attached to the station’s External Logistics Module 1, where it will spend the next year spectroscopically analyzing over a billion dust samples from across the planet. Scientists hope to use this data to update global systems models for things like weather prediction and climate research.

Flight hardware for the Biopolymer Research for In-Situ Capabilities, an investigation of how microgravity affects the process of creating a concrete alternative made with an organic material and on-site materials such as lunar or Martian dust. Each module makes two bricks, for a total of six bricks made in space. (Image credit: James Wall)Biopolymer space concrete

NASA’s Artemis program aims to establish a permanent human presence on and around the moon. However, the question of how to best build sustainable habitats from locally sourced resources remains unanswered. Building materials like steel and concrete are heavy and extremely cost-ineffective to launch to orbit, let alone the moon.

Students at Stanford University are investigating how microgravity affects the formation of a concrete alternative that mixes an organic compound with water and “in situ” resources, like lunar regolith or Martian dust, to create a biopolymer soil composite (BPC). Rather than utilizing a chemical reaction, heat or pressure, the compounds used in BPCs allow the mixture to dry with “about half the strength of Portland cement,” according to Stanford student Jocelyn Huang Thai, one of the team leads for the Biopolymer Research for In-Situ Capabilities investigation.

This experiment will use a compound called bovine serum albumin (BSA) to create six bricks aboard the space station, each about 0.3 inches (7 millimeters) long. On Earth, BSA forms protein bridges connecting dirt particles during the drying process. Researchers hope to compare bricks mixed in space with counterparts made on Earth to determine the influence of microgravity on the drying process and protein bridge formation, and how that affects the density and strength of the bricks.

This image shows skin samples cultured in the Suture in Space hardware prior to flight. This ESA investigation examines the behavior of sutures and wound healing in microgravity. (Image credit: University of Florence)Space stitches

The European Space Agency (ESA) and the University of Florence in Italy are sending skin samples to the space station on CRS-25. But these aren’t just small flakes in a test tube. A set of tissue chips, containers designed to store human cells for study in microgravity, will hold samples of human skin and blood vessels, ethically derived, which have been wounded and then sutured to study the mechanical forces of stitches on the healing process in microgravity.

It stands to reason that, as the pace of human spaceflight increases, someone at some point will be inadvertently injured. Monica Monici of the University of Florence, principal investigator of the Suture in Space study, highlighted the benefits of studying sutures in space during Thursday’s call.

“Previous experiments on cell cultures and animal models have shown that wound closure is delayed in microgravity conditions,” Monici explained. “Since evacuation time from space to Earth [on future missions] might be very long, the need for implementing trauma care and surgeries increases … Wound healing should be regarded as a major problem for investigation since it is critical for crew survival.”

Pre-flight preparation of tissue chips for the Immunosenescence investigation, which studies the effects of microgravity on immune function to determine the mechanisms behind immune system aging. (Image credit: Sonja Schrepfer, University of California San Francisco)

Immunosenescence, the aging of immune cells, occurs at a higher rate in microgravity, and that aging can inhibit cells’ ability to repair tissues. Like the sutures experiment, the Immunosenescence investigation also uses tissue chips, but this time to study immunocellular aging.

Researchers for the project will get to observe these cells in flight and back on the ground, too. A similar experiment flew on a cargo mission in December of 2018, but its mission parameters did not plan for a return. Scientists will get to observe the immune tissue’s reaction post-flight, after Immunosenescence samples are returned to Earth in September.