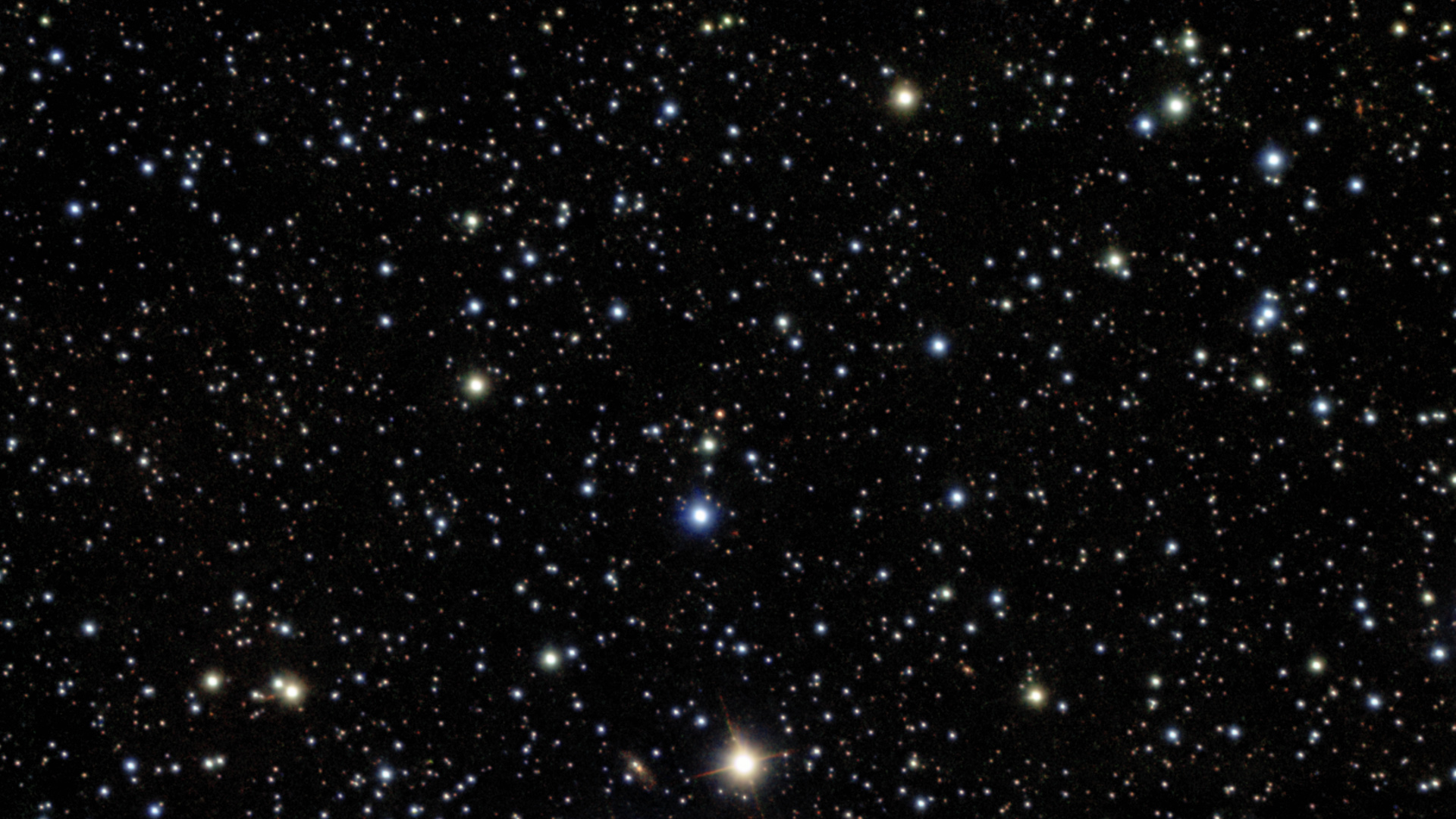 All eyes are on the source of the record-breaking gamma ray burst that lit up the sky last week.

On Oct. 9, a beam of light more energetic than astronomers had ever seen zipped past our planet, temporarily blinding detectors on several NASA satellites. The beam came from a gamma ray burst, the most energetic type of explosion known to occur in the universe (apart from the Big Bang), which is believed to accompany the birth of some black holes.

Within hours, dozens of telescopes all over the world were pointing in the direction of the burst’s source, confirming that this, indeed, was one for the books. The event, officially named GRB221009A, has since earned the nickname BOAT (“brightest of all time”), and astronomers hope it will help shed light on the mind-boggling physics behind these cataclysmic phenomena.

“It’s a once in a century event, maybe once in 1,000 years,” Brendan O’Connor, an astronomer at the University of Maryland and George Washington University, told Space.com. “We’re just really in awe of this event and feeling very lucky to be able to study it.”

Related: Gamma-ray bursts might be much rarer than we thought, study suggests

Gamma ray bursts are not rare. About once a day, one flashes briefly at our planet from somewhere in the cosmos. Many more are believed to take place throughout the universe. Some gamma ray bursts light up for just a fraction of a second, probably triggered by collisions of neutron stars, which are stellar corpses left after supernova explosions of massive stars that have run out of fuel in their cores. Others can last for several minutes, most likely caused when a black hole, just born out of a supernova explosion, swallows up so much of its parent star at once that it has to get rid of some in the form of an extremely powerful jet.

The gamma ray burst of Oct. 9 stood out even among the long-firing gamma ray bursts previously observed, its photons bombarding satellite detectors for about 10 minutes. The energy those photons packed was higher than any that had been measured before. At 18 teraelectronvolts, some of the GRB221009A photons outperformed by at least a factor of two the most energetic particles produced by Earth’s most powerful particle generator, the Large Hadron Collider.

The burst’s afterglow, caused by the interaction of gamma rays with cosmic dust, was out of the ordinary as well, outhsining any other seen before despite the fact that GRB221009A emanated from a part of the sky obstructed by the thick band of the Milky Way galaxy. The burst was so powerful that it ionized Earth’s atmosphere and disrupted long wave radio communications.

Astronomers manage to trace the origin of only about 30% of all gamma ray bursts that skim Earth, said O’Connor, who was part of a team of astronomers who used the Gemini South telescope in Chile to observe the aftermath of GRB221009A  on Oct. 14, nearly a week after it first lit up. In the case of GRB221009A, astronomers did find the source: a dust-filled galaxy in the constellation Sagitta, also known as the Arrow. And then came another surprise: The gamma ray burst occurred much closer to Earth than most others that have been observed before.

“These gamma ray bursts come from the collapse of massive stars, and these stars have very short lifetimes,” Jillian Rastinejad, an astronomy student at Northwestern University, who took part in the Gemini South measurements, told Space.com. “These stars follow the star formation history of the universe. So where star formation peaks, these long gamma ray bursts peak, which is at about half the age of the universe. This gamma ray burst, however, has happened much more recently, much nearer to us.”

Astronomers estimate the source of GRB221009A to lie about 2.4 billion light-years from Earth. Closer gamma ray bursts have been observed before, but they haven’t been as energetic as GRB221009A, adding to the event’s special status.

“Because this event appears so bright to us, we will be able to study it a lot longer and in a lot better detail,” O’Connor said. “At least 50 telescopes are looking at it right now in all wavelengths, and that will help us maximize the science.”

Although only lasting for a few short minutes at best, gamma ray bursts trigger effects that can be observed for weeks. Astronomers also look for the supernova explosion that generated the burst, which expels material outward more slowly.

“Our current understanding of these explosions is that you have a massive star and as it implodes, it creates a black hole, which then some of the material from the star falls into,” O’Connor said. “The black hole then spits it out as this jet, which is moving nearly at the speed of light, which is the gamma ray burst. At the same time, when the star implodes, some of that material rebounds outwards, essentially begins moving away at much slower speeds, but still very fast. And this is the supernova explosion.”

As the gamma rays of the initial burst interact with material in the surrounding universe, they produce an afterglow, which, Rastinejad said, spans the electromagnetic spectrum but is best observed in X-ray and radio wavelengths. Astronomers are still observing the afterglow of GRB221009A, which was first captured by NASA’s gamma-ray-chasing satellite Swift forming colorful rings around the source in the first hours after the burst.

Telescopes are now beginning to see the first signs of the supernova explosion that gave rise to GRB221009A, Rastinejad said, and expect it to “fully develop” over the next few weeks. Due to the position of the source of the burst in the sky, however, they will not be able to observe the supernova throughout its several-month lifetime.

“It’s starting to go behind the sun. So by around the end of November we’re not going to be able to observe it until February,” Rastinejad said

“This is a remarkable opportunity to look for how much mass was created [in that event],” Rastinejad said. “But also to understand what are the chemical elements that were created in this event. We still don’t know how some of the heaviest elements in the universe have been created, and we think that we might be able to see such processes in supernova explosions.”

Discovered by accident in the 1960s by U.S. military satellites developed to keep an eye on Soviet nuclear testing (which, too, produces gamma rays), gamma ray bursts remained a complete mystery for decades. It was only in the 1990s that astronomers first realized that these powerful flashes of light coming from all corners of the universe might have something to do with collapsing giant stars.

A lot of the current understanding of gamma ray bursts, however, is still based on theory and computer modeling, rather than observations, and astronomers hope that GRB221009A will help fine-tune those theories. A slew of research papers on all aspects of this carefully observed event is certain to follow in the coming months as astronomers  strive to make the best out of this once-in-a-lifetime opportunity.

While the relative proximity of a burst as powerful as GRB221009A is a boon to science, astronomers are not keen to see a gamma ray burst much closer to Earth. Especially not in our galaxy. Scientists think that a gamma ray burst aimed at our planet from a distance of some thousands of light-years would destroy the planet’s protective ozone layers and trigger changes in the atmosphere that might lead to an ice age. In fact, one such gamma ray burst may have triggered one of the five major extinction events in Earth’s history, the Ordovician mass extinction some 440 million years ago.

“Luckily, the jets that cause the gamma ray bursts are very narrowly beamed,” O’Connor said. “Only a few degrees wide. But if it were to happen in our galaxy and was pointed at us, it would be really dangerous to us. Luckily, the rate of these events that we expect to happen in every galaxy is incredibly low.”