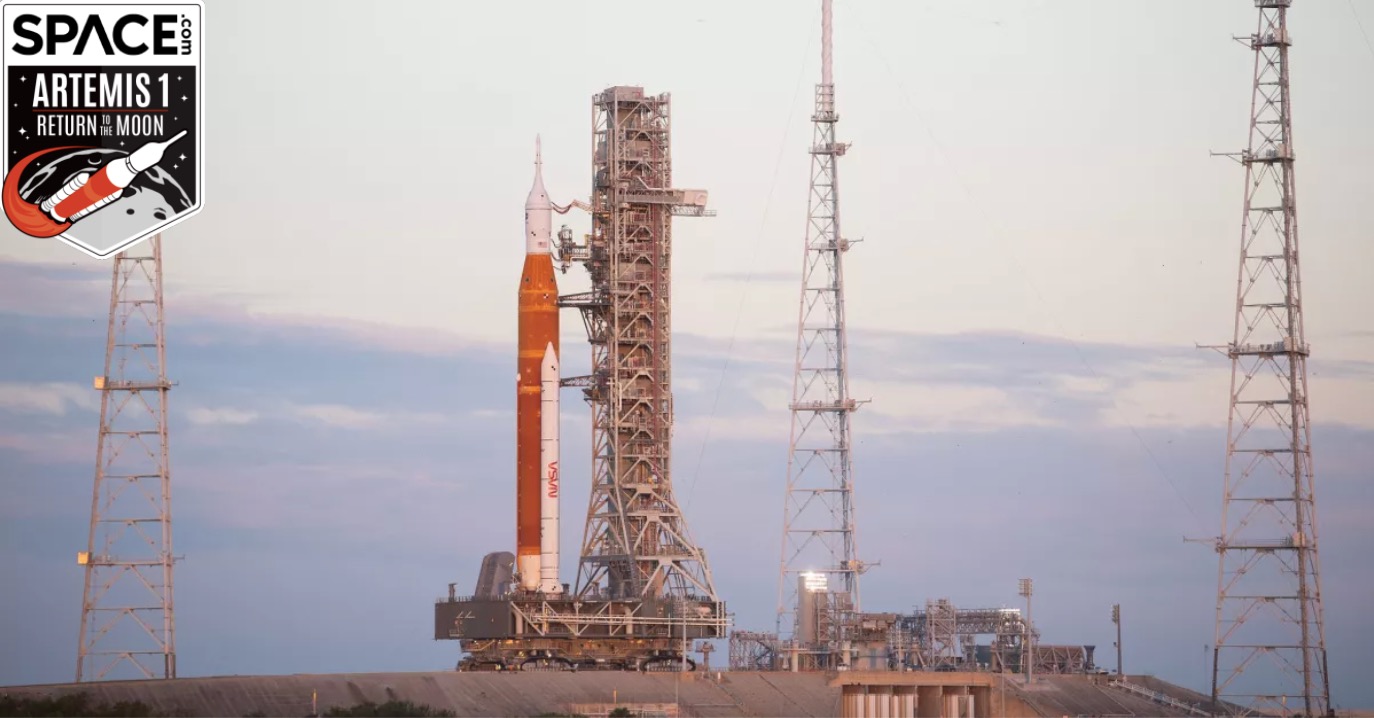 NASA has begun to assess how well its Artemis 1 moon rocket weathered a powerful storm that hit its Florida spaceport today..

That maelstrom was Nicole, which slammed into Florida’s Space Coast Thursday morning (Nov. 10) as a Category 1 hurricane but weakened to a tropical storm as it moved inland. Nicole’s wind and rain lashed the Artemis 1 vehicle, which is sitting atop Launch Pad 39B at NASA’s Kennedy Space Center (KSC).

The Artemis 1 stack — a Space Launch System (SLS) rocket topped by an Orion crew capsule — appears to have made it through the ordeal mostly unscathed, according to NASA officials.

“Our team is conducting initial visual checkouts of the rocket, spacecraft and ground system equipment with the cameras at the launch pad,” Jim Free, associate administrator of the Exploration Systems Development Mission Directorate at NASA headquarters in Washington, said via Twitter (opens in new tab) on Thursday afternoon.

“Camera inspections show very minor damage such as loose caulk and tears in weather coverings,” he added. “The team will conduct additional onsite walkdown inspections of the vehicle soon.”

Those wind speeds are “within the rocket’s capability,” he noted. “We anticipate clearing the vehicle for those conditions shortly.”

Indeed, SLS is designed to handle winds up to 85 mph (137 kph) at the 60-foot level “with structural margin,” NASA officials said in a statement on Tuesday (Nov. 8).

Artemis 1 will send Orion on an uncrewed trip to lunar orbit and back. NASA is gearing up to launch the mission as soon as Wednesday (Nov. 16). It’s unclear if Nicole has changed that calculus; Free’s Twitter post didn’t mention the schedule or any possible changes to it.

Weather has already kept Artemis 1 on the ground longer than originally planned. The mission was supposed to fly in late September, but NASA rolled SLS and Orion off Pad 39B and back to KSC’s cavernous Vehicle Assembly Building to shelter from Hurricane Ian.

Artemis 1 rolled back out to the pad on Nov. 4. Nicole’s approach caused NASA to push the planned launch back by two days, from Nov. 14 to Nov. 16. But mission team members opted to keep the rocket on the pad through the landfall of the storm, which grew to be considerably stronger than early forecasts had predicted.

“With the unexpected change to the forecast, returning to the Vehicle Assembly Building was deemed to be too risky in high winds, and the team decided the launch pad was the safest place for the rocket to weather the storm,” Free said.

As its name suggests, Artemis 1 is the first mission in NASA’s Artemis program of moon exploration.

If all goes well on Artemis 1, Artemis 2 will launch astronauts on a mission around the moon as early as 2024. Artemis 3 will then put boots down near the lunar south pole in 2025 or 2026, if current schedules hold.