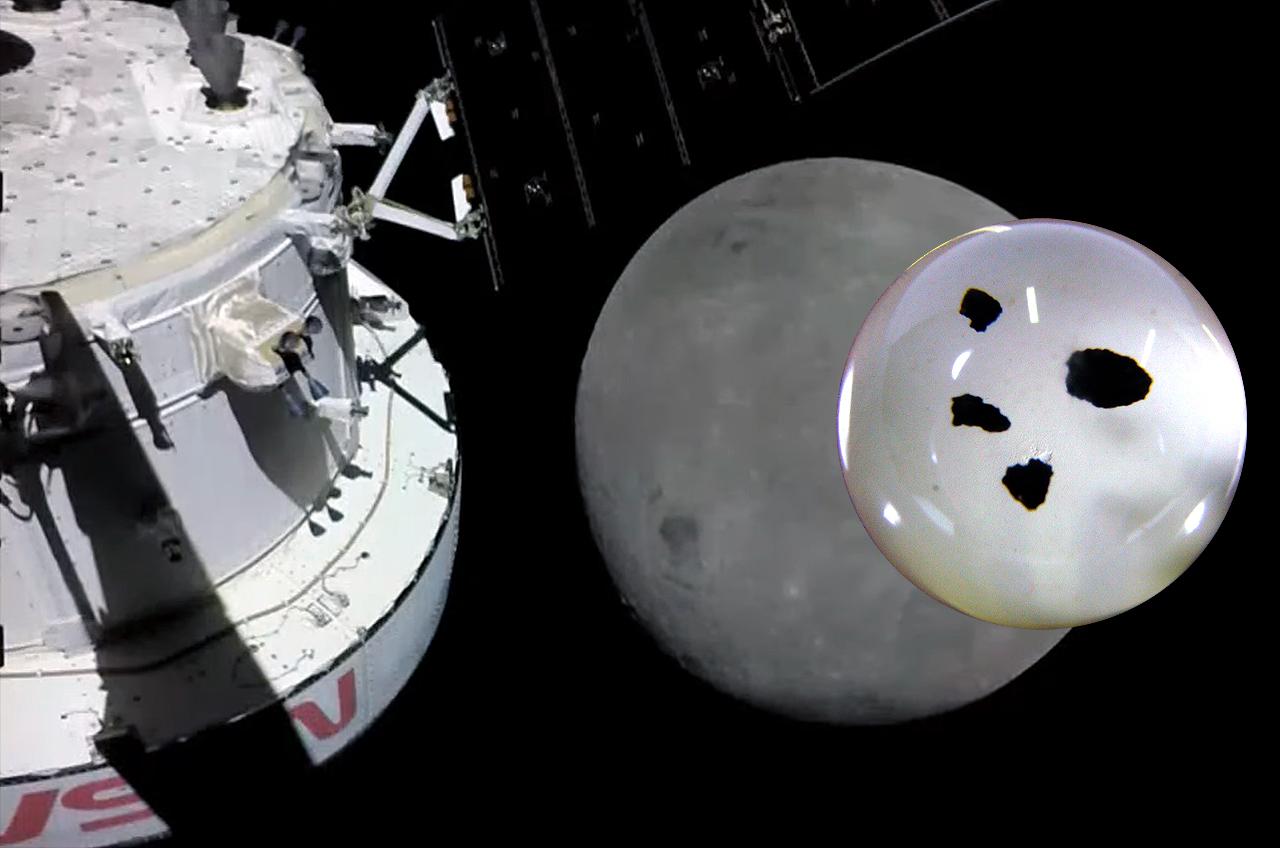 Four small pieces of the moon on board NASA’s Orion spacecraft have come closer to the lunar surface than they have been in the more than 50 years since they were collected.

The lunar samples’ return home (opens in new tab) — or, at least, their quick flyby of the world from which they came — was part of a larger journey to prepare for people to do the same. The quad of dust specks, which were first brought back to Earth by Apollo 11 astronauts Neil Armstrong and Buzz Aldrin in 1969, came within 80 miles (130 kilometers) of the moon on Monday (Nov. 21) as part of NASA’s Artemis 1 mission.

While the lunar material’s inclusion on the Orion capsule linked the Apollo and Artemis missions (opens in new tab), the close flyby of Earth’s natural satellite fulfilled a more critical purpose — to use the moon’s gravitational force to direct the spacecraft toward its entry into a lunar distant retrograde orbit.

The successful maneuver marked only the second time that a lunar sample revisited the moon. Previously, a rock recovered by the Apollo 12 astronauts flew on Apollo 16 as part of a 1972 investigation into the moon’s magnetic field.

The four Apollo 11 lunar samples flying on Artemis I are embedded inside what NASA calls a “button,” a small lucite bubble.

“For Apollo 11, we had the goodwill samples (opens in new tab). These were individual, greater than 2-millimeter [0.08-inch] fragments separated out of the biggest of soil collected on Apollo 11 and they were gifted to every country and every state. We made more than we handed out, we had four or five leftover. This is one of the leftovers,” Ryan Zeigler, Apollo sample curator at the Johnson Space Center in Houston, told collectSPACE.com.

An example of a NASA-prepared lucite “button” containing Apollo 11 lunar soil samples. One of these buttons has revisited the moon aboard NASA’s Artemis I Orion spacecraft. (Image credit: collectSPACE.com)

The 0.002 ounces (0.05 grams) of Apollo 11 moon dust inside the button is a tiny percentage of the 842 pounds (382 kilograms) of lunar material returned by the first moon landing mission. If the Artemis program is successful in establishing a sustainable human presence on the moon, then the total samples from the six Apollo lunar landing missions may someday be a small percentage of the moon rock on Earth.

The Artemis 1 mission is the second time this particular button has been launched back into space. It is also the second flight for these Apollo 11 samples aboard an Orion spacecraft. The same lucite-encased dust from Tranquility Base first flew aboard the Exploration Flight Test-1 (EFT-1) (opens in new tab) in 2014. On that mission, the Orion flew into high Earth orbit before plunging back to the planet and splashing down.

The button on Artemis 1 is also the second Apollo 11 sample currently in space. Another of the leftover goodwill display has been on board the International Space Station (opens in new tab) since 2010 as part of a plaque pairing it with a rock collected off the top of Mount Everest, Earth’s highest mountain.

Orion entered into the lunar sphere of influence at 2:09 p.m. EST (1909 GMT) on Sunday (Nov. 20), five days into its 25-day mission (opens in new tab), transitioning from Earth to the moon being its main gravitational draw. The spacecraft performed a trajectory correction burn overnight and then fired its orbital maneuvering system engine (opens in new tab) for two minutes and 30 seconds at 7:44 a.m. EST (1244 GMT) on Monday to accelerate into the flyby.

The closest approach followed 11 and a half minutes later.

The Earth and moon as seen by NASA’s Artemis I Orion spacecraft as it approached a lunar flyby on Monday, Nov. 21, 2022. (Image credit: NASA)

“We will be passing over some of the Apollo landing sites,” Jeff Radigan, NASA’s Artemis 1 flight director, said a pre-flyby press briefing in response to a question from collectSPACE. “We’ll be going over the the Apollo 11, 12 and 14 sites, or close to them. Unfortunately, they are going to be in the darkness, they will not be sunlit, so we won’t get very good video of them. But we will definitely be close to history when we do the power flyby.”

As expected, communication with Orion was lost for 34 minutes beginning at 7:26 a.m. EST (1226 GMT) as the spacecraft passed behind the moon. The Goldstone ground station in southern California, part of the Deep Space Network, reacquired Orion’s signal once it emerged from the far side.

Orion — and its Apollo 11 moon rock payload — will again perform a close flyby of the moon on their way back to Earth on Dec. 5. The Artemis I mission will come its end six days later with a splashdown in the Pacific Ocean on Dec. 11.