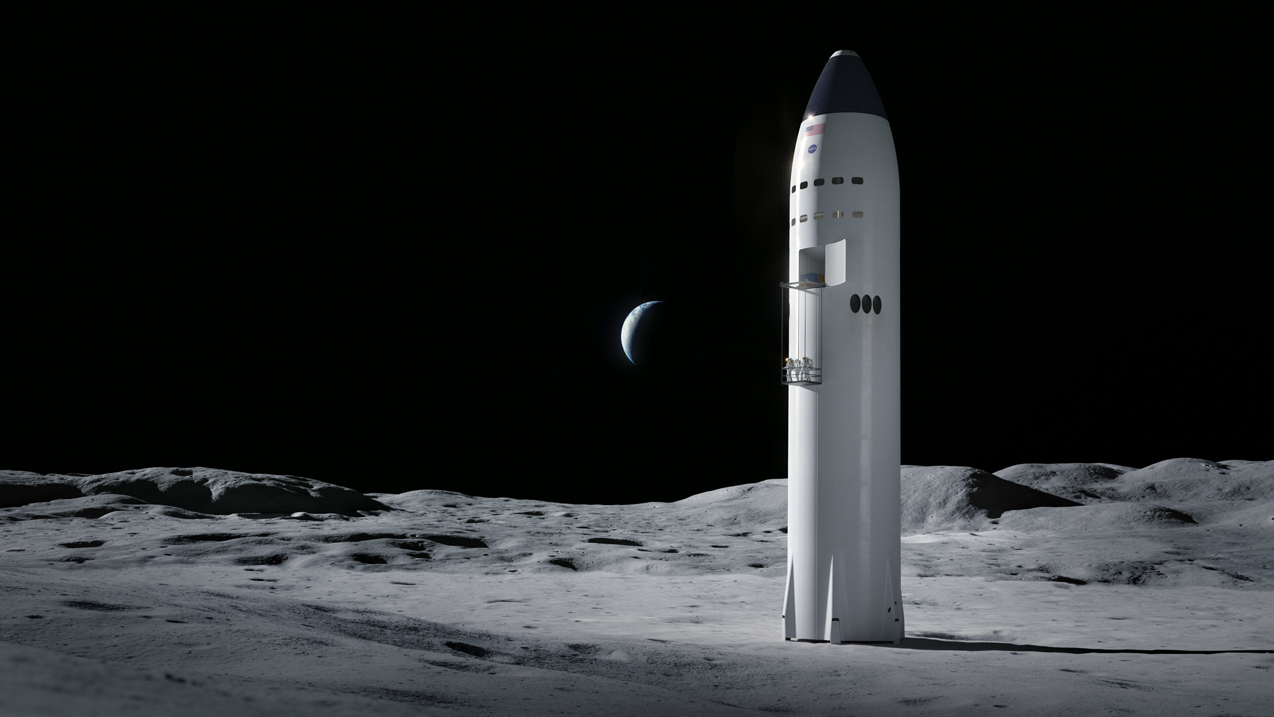 Artemis 3 is the third scheduled flight of the Artemis program.

The mission aims to put humans on the moon around 2025, assuming that previous missions of the Artemis program go to plan.

Like the uncrewed Artemis 1 and crewed Artemis 2, this mission aims to launch the gigantic Space Launch System (SLS) megarocket and Orion spacecraft. For landing on the moon, the crew will use SpaceX‘s Starship, a system that the California company is developing right now for crewed human missions.

Elizabeth Howell, Ph.D., is a staff writer in the spaceflight channel since 2022. She was contributing writer for Space.com (opens in new tab) for 10 years before that, since 2012. Elizabeth’s on-site reporting includes two human spaceflight launches from Kazakhstan, three space shuttle missions in Florida, and embedded reporting from a simulated Mars mission in Utah.

The crew for Artemis 3 has not yet been named and the 2025 launch date is rather tentative. NASA is awaiting results from both Artemis 1 and Artemis 2 before giving the go-ahead for Artemis 3. Additionally, the agency will require meaningful progress on spacesuits and the human landing system for the moon landing to go ahead.

NASA’s readiness for Artemis 3 depends on three key things: the success of previous missions, its development of new spacesuits, and the availability of an unflown human landing system or HLS (SpaceX’s Starship).

Artemis 1, scheduled to fly in 2022, will assess the readiness of SLS and Orion to carry humans. The major goals of Artemis 2 — scheduled for 2024, if all goes well with the predecessor mission — will then be to fly four humans to the moon’s orbit and back. Artemis 2 will last a minimum of eight days (but could extend to as long as three weeks).

Beyond assessing the data collected from Artemis 1 and 2, NASA will also need to make sure its spacesuits are ready. The spacesuits were at first developed in-house by the agency, but it elected to pivot to commercial providers after NASA’s Office of the Inspector General warned the agency-made spacesuits were causing undue delay.

The last item will be the readiness of SpaceX’s Starship system. Starship has only performed a few tests in mid-air and has yet to fly an orbital mission. SpaceX hopes to fly the orbital mission in 2022. Getting Starship ready for the moon was also delayed due to a complaint (and later lawsuit) by Blue Origin, a competitor in the HLS contract by NASA. The lawsuit is resolved, but it delayed the implementation of the HLS contract by several months.

Who will fly on Artemis 3?

The Artemis 3 crew is not yet publicly named. NASA has said the crew will include four astronauts.

NASA astronauts will form at least part of the crew. The agency has pledged the landing crew will include the first woman and the first person of color on the moon (as all of the Apollo human landing missions of the 1960s and 1970s had white men on board.) In 2022, NASA opened eligibility for Artemis missions to the entire astronaut corps.

It is unclear what other agencies may be invited on the trip. Artemis is an international program and a coalition of tens of agencies are forming under the Artemis Accords, which are led by NASA.

The Americans have promised Japan a seat on a future moon mission and possibly, a seat on a landing mission. Japan and the United States came to the pact as part of a larger set of agreements on cybersecurity, 5G cellular networks and other science and technology collaborations, the White House said at the time.

The European Space Agency is also a major collaborator in the Artemis Accords, contributing a European Service Module to the NASA Orion spacecraft as well as several elements to the Gateway space station. A less likely selection would be Canada, as the country already has an astronaut assigned to Artemis 2 in thanks to the country’s Canadarm3 robotic technology contributions to Gateway.

What will Artemis 3 do?

Artemis 3 will follow a similar mission profile to Artemis 2, including a launch from the Kennedy Space Center, a translunar injection to bring the astronauts to the moon, an orbiting mission and a return to Earth for a splashdown in the Pacific Ocean.

The mission’s major new goal beyond Artemis 2 will be to place two humans at the south pole of the moon, in a zone that is rich with water ice dubbed Artemis Base Camp. (The other two astronauts would remain aboard Orion, in lunar orbit, and the landing area is not yet decided.)

Observations from numerous missions appear to confirm a great deal of water below the moon’s surface, particularly in permanently shadowed craters that receive no sunlight. These craters may include hydrogen-rich deposits and water ice underneath the top three feet (one meter) of lunar regolith. Water is a necessity not only for human needs but also for machinery and for growing plants on the surface.

High-resolution maps from NASA’s Lunar Reconnaissance Orbiter do provide a great deal of information about the water that is present, although investigators have said there is uncertainty about how pure the water is and exactly where it is located. Additionally, turning water into fuel is still being explored (a CubeSat selected to fly with Artemis 1 is investigating water electrolysis, as a single example.)

NASA is exploring several areas of the south pole in the coming years using a series of Commercial Lunar Payload Service missions that will place landers, rovers, and scientific payloads upon the surface. Canada also may send a robotic rover to the moon as soon as 2026. The CLPS missions and robotic exploration in the 2020s may assist scientists and engineers with learning how much water is available for humans.

Beyond learning about the moon’s water and scientific experiments, NASA expects the landing crew to spend 6.5 days on the lunar surface, which is nearly twice what Apollo astronauts did during their longest missions. They will perform four moonwalks or extravehicular activities lasting about six hours, which is similar to what is performed on the International Space Station. The agency expects the astronauts to use their feet for maneuvering, as they don’t have a rover on the manifest.

What comes after Artemis 3?

The planning past Artemis 3 is highly uncertain given that the mission is relatively far away from us, but NASA does have some early-stage planning for the later 2020s. The timeline for these missions highly depends on how much money the agency receives from Congress, along with the technical progress of the Artemis program.

The agency’s “moon to Mars planning manifest” released with its 2023 budget request suggests Artemis 4 will launch in 2027 to help build out Gateway. Then the next human landing on the moon would be Artemis 5 in 2028. The following three landings for Artemis 6 through 8 would happen in 2029, 2030 and 2031.

NASA has been framing Artemis as an opportunity to build out future missions to Mars, but exactly when hasn’t been decided yet. In early 2022, the agency said the aim is to focus on the yearly landings on the moon first before targeting the Red Planet in more planning detail.