Neptune is cooling down and scientists don’t know why 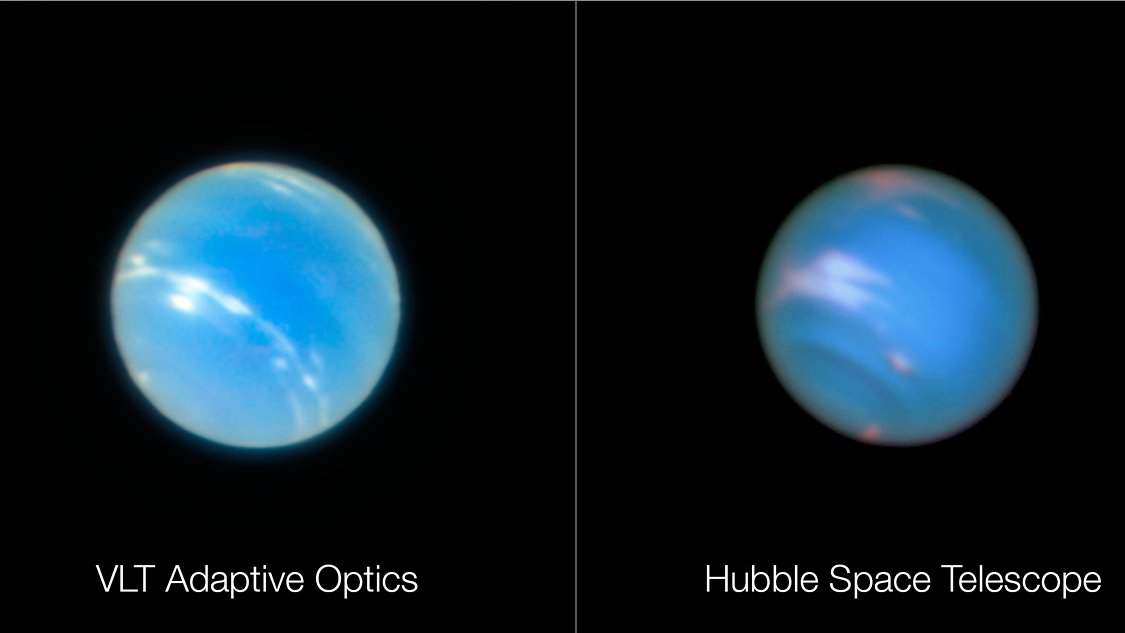 Two decades worth of observations revealed unexpected cooling of the solar system’s most distant planet Neptune amid its astronomical summer.

Neptune is orbiting 30 times farther away from the sun than Earth with one year lasting 165 Earth years. The ice giant’s seasons, too, last much longer than those on Earth — more than 40 Earth-years each.

As the planet moved into its southern summer over the past two decades, astronomers observed its average global temperatures plummet by a staggering 14 degrees Fahrenheit (8 degrees Celsius).

“This change was unexpected,” Michael Roman, a postdoctoral research associate at the University of Leicester and lead author on the new paper, said in a statement. “Since we have been observing Neptune during its early southern summer, we would expect temperatures to be slowly growing warmer, not colder.”

Related: There’s something strange going on inside Neptune

The team analyzed observations in the heat-carrying infrared part of the light spectrum obtained from 2003 to 2018 by some of the world’s best telescopes including the European Southern Observatory’s (ESO) Very Large Telescope in Chile, the Keck and Subaru Telescopes in Hawai’i, and NASA’s Spitzer Space Telescope.

The observed cooling, however, wasn’t uniform, the researchers said in the statement.

Measurements of Neptune’s stratosphere, the second lowest layer of the planet’s atmosphere, revealed a warming trend above Neptune’s south pole. This data set, which only contained data from a two-year period between 2018 and 2020, revealed a speedy warming of about 20 degrees F (11 degrees C). The scientists said that such polar warming has never been observed on Neptune before.

However, observations of the distant Neptune have only been possible for the past few decades and scientists know very little about the natural passing of the seasons on the planet.

This composite shows thermal images of Neptune taken between 2006 and 2020. The first three images (2006, 2009, 2018) were taken with the VISIR instrument on ESO’s Very Large Telescope while the 2020 image was captured by the COMICS instrument on the Subaru Telescope. (Image credit: ESO/M. Roman, NAOJ/Subaru/COMICS)

“Our data cover less than half of a Neptune season,” Glenn Orton, Senior Research Scientist at JPL and co-author on the study said in the statement. “So no one was expecting to see large and rapid changes.”

Scientists don’t know yet what drives the unexpected temperature fluctuations, but think it could have something to do with the 11-year cycle of the sun’s activity, the periodic ebb and flow of sunspot generation by the star.

“The temperature variations may be related to seasonal changes in Neptune’s atmospheric chemistry, which can alter how effectively the atmosphere cools,” Roman said. “But random variability in weather patterns or even a response to the 11-year solar activity cycle may also have an effect.”

Previous studies suggested there might be a link between the amount of sunspots and Neptune’s brightness. The new study also found some evidence of a possible connection between the solar cycle, the brightness of clouds in Neptune’s atmosphere and the temperature of its stratosphere.

Scientists hope that future observations will shed more light on the distant planet’s mysteries. The James Webb Space Telescope, the most powerful space observatory ever built, is expected to make major leaps in the understanding of Neptune, as well as of the other solar system ice giant, Uranus.

“The exquisite sensitivity of [JWST’s] mid-infrared instrument, MIRI, will provide unprecedented new maps of the chemistry and temperatures in Neptune’s atmosphere, helping to better identify the nature of these recent changes,” Leigh Fletcher, Professor of Planetary Science at the University of Leicester, a co-author of the new study, said in the statement.

The study was published on Monday (April 11) in the Planetary Science Journal.