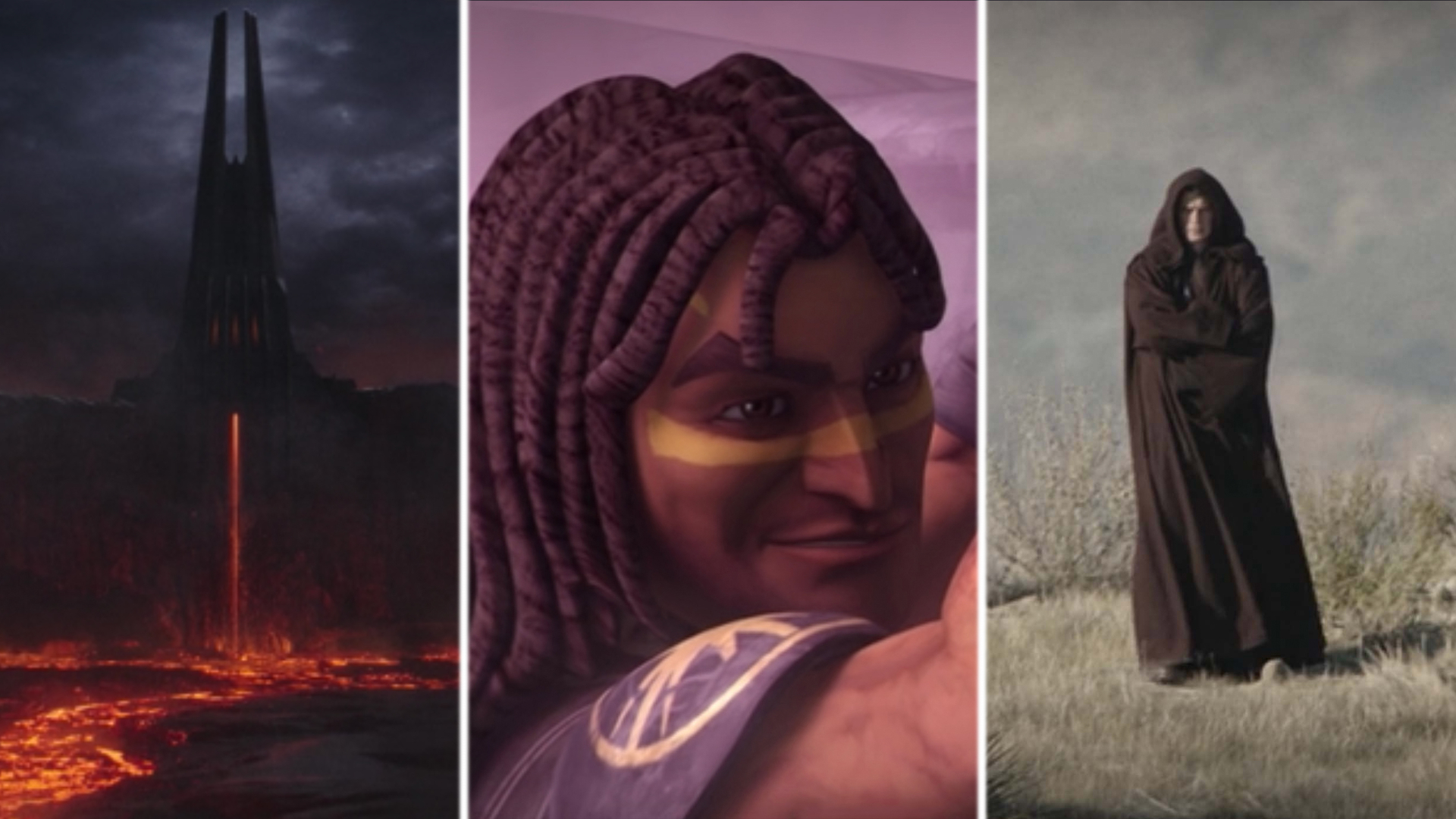 A lot happens in the latest episode of ‘Obi-Wan Kenobi’ and that means there’s ample opportunity for Easter eggs and references to slip through unnoticed. Especially when all you can focus on is the long-awaited return of the most badass villain in movie history.

If you’re wondering what you’ve missed during your first Disney Plus (opens in new tab) viewing, you’ve come to the right place. Read on to find out who voices bubbly Empire sympathizer, Freck, why the name Quinlan sounds so darn familiar, and what all that Aurebesh writing means inside the droid workshop hideout.

Once you’ve cracked all the Easter eggs you can handle, be sure to check out our ‘Obi-Wan Kenobi’: Episode three review to find out exactly what we thought as the six-episode mini series reaches its half-way point.

Pause you must, spoilers for ‘Obi-Wan Kenobi’ episodes one to three ahead!!!!

Watch Obi-Wan Kenobi on Disney Plus

Obi-Wan (Ewan McGregor) is still trying to contact Qui-Gon Jinn’s (Liam Neeson) force ghost, but his old master isn’t picking up. If you missed this reference in Episode 1, Yoda (Frank Oz) tells Obi-Wan he’ll teach him how to contact the immortal Jedi, but 10 years later and it doesn’t look like Kenobi’s had much success…

During this scene Yoda’s voice can be heard: “Only pain will you find”, he says. This is a flashback to ‘Revenge of the Sith’, when Yoda warns Obi-Wan not to look at the ravaged Jedi temple’s security recordings and he witnesses Palpatine dubbing Anakin Lord Vader.

Darth Vader’s abode first appeared in ‘Rogue One’. It resides on the planet Mustaphar – where the newly anointed Dark Lord was defeated by Obi-Wan in ‘Revenge of the Sith’ – and according to Star Wars canon (opens in new tab), it resides above a Sith cave. In ‘Obi-Wan Kenobi’ we get a much more detailed look at the bacta tank, seen in ‘Rogue One’, which Vader uses to sooth his injuries and meditate.

Darth Vader’s suit subtly changes in each Star Wars movie. Its appearance in’ Obi-Wan Kenobi’ shares many similarities with the suits in ‘Rogue One’ and ‘A New Hope’ (the nearest movies on the Star Wars timeline but still nine years in the future). The most notable difference is the more prominent LED lights on the control panels.

One difference between the original suit in ‘A New Hope’ and the two Disney variants is Vader’s tunic. In the former it sits on top of the armor that protects the upper chest and collar bones, while in the latter it sits underneath. All of the suits share a very important detail, a subtle red tint to the lenses on Vader’s mask, which aren’t present in ‘The Empire Strikes Back’ and ‘Return of the Jedi’.

This R2 unit has a bad motivator

When Obi-Wan and Leia (Vivien Lyra Blair) touch down on Mapuzo they sneak past a loader droid (like NED-B who we meet later) and an old R5 unit. This is the same series of droid as R5-D4, which malfunctions shortly after Luke (Mark Hamill) selects it from the Sandcrawler line-up, along with C-3PO (Anthony Daniels), outside the Lars homestead. Incidentally, Luke incorrectly refers to the droid as an R2 unit, when it’s an R5 series droid.

The hooded figure that Obi-Wan sees in the Mapuzo countryside is Anakin Skywalker (Hayden Christensen). Quite what this means is up to interpretation, but it’s likely yet another example of how Obi-Wan is tormented by ghosts of the past. It could also symbolize the sliver of Anakin that still exists within Darth Vader.

This huge obelisk-like structure serves as the inquisitors’ headquarters and resides on a moon called Nur. Gamers will recognize the fortress from the climax of ‘Jedi: Fallen Order’ (although it does look slightly different), where playable Jedi, Cal Kestis, faces off against Darth Vader. A neat detail is that much of the fortress is underwater, visible via the huge underwater windows as Reva (Moses Ingram) strides to meet with the other inquisitors [10:05].

Who the Freck is it?

The bubbly Empire sympathizer who gives Obi-Wan and Leia a lift on Mapuzo might sound a lot like Seth Rogen, but he’s actually voiced by JD from ‘Scrubs’ (Zach Braff). We also dig his mole-like character design, rather fitting for a character who works on a mining planet.

The flag on the back of Freck’s vehicle bears the Galactic Empire’s insignia. It could serve a practical reason, but when the happy-go-lucky alien makes it clear he’s an imperial sympathizer, it seems more likely that it’s a personal addition.

One of the juiciest snippets of information from the episode is when Obi-Wan consoles Leia by explaining how Jedi are taken from their families as children, before saying: “I think I had a brother; I really don’t remember him. I wished [sic] I did.” This is significant because in the novelization of Return of the Jedi (opens in new tab), which was released just before the film, Obi-Wan’s force ghost refers to Owen Lars (Joel Edgerton) as his brother. As things stand, this isn’t canon, but it’s a neat little nod nonetheless.

The imperial probe droid that scans Obi-Wan’s face is the same type of droid that was first seen in ‘The Empire Strikes Back’. They were used to find the rebel’s Echo Base on the planet Hoth; one of the droids was destroyed by Han Solo (Harrison Ford) and Chewbacca (Peter Mayhew) during a recon mission.

The writing’s on the wall

Eagle-eyed Star Wars fans have been busy deciphering the various names written in Aurebesh (opens in new tab), etched onto the walls of the hideout by fugitives heading to Jabiim (opens in new tab) via the path. As Tala Durith (Indira Varma) mentions – the imperial officer who helps Obi-Wan and Leia – the purpose of the Path is to ferry fugitives from various systems to Jabiim so they can receive new identities to safeguard them from the Empire.

Fans of ‘Star Wars: The Clone Wars’ will know who Obi-Wan is talking about when he excitedly says: “Quinlan was here?” as he studies an etching. This is a reference to a Jedi called Quinlan Vos (opens in new tab), who first appeared as a background character in Tatooine during ‘The Phantom Menace’.

He was afforded a much bigger role over several episodes of ‘The Clone Wars’, where he’s just too cool for Jedi school. Obi-Wan’s joyous reaction to knowing Quinlan is alive isn’t surprising as the two Jedi have history – in the ninth episode of season three they even fought bounty hunting gunslinger, Cad Bane, together.

During the duel in the quarry, Obi-Wan strikes an exhaust vent causing plumes of smoke to obscure the Dark Lord’s vision. In ‘The Empire Strikes Back’, Luke Skywalker uses a severed exhaust vent to blow smoke into Vader’s (David Prowse/James Earl Jones) face during their duel in the carbon freezing chamber on Cloud City.

At roughly 37:20, Reva touches an etching in the abandoned hideout and clearly recognizes the insignia of the Jedi Order. The rare moment of calm is followed by a fit of rage. This is surely another clue that Reva was once on the path to becoming a Jedi – but why does she despise Obi-Wan so much?

Watch Obi-Wan Kenobi on Disney Plus