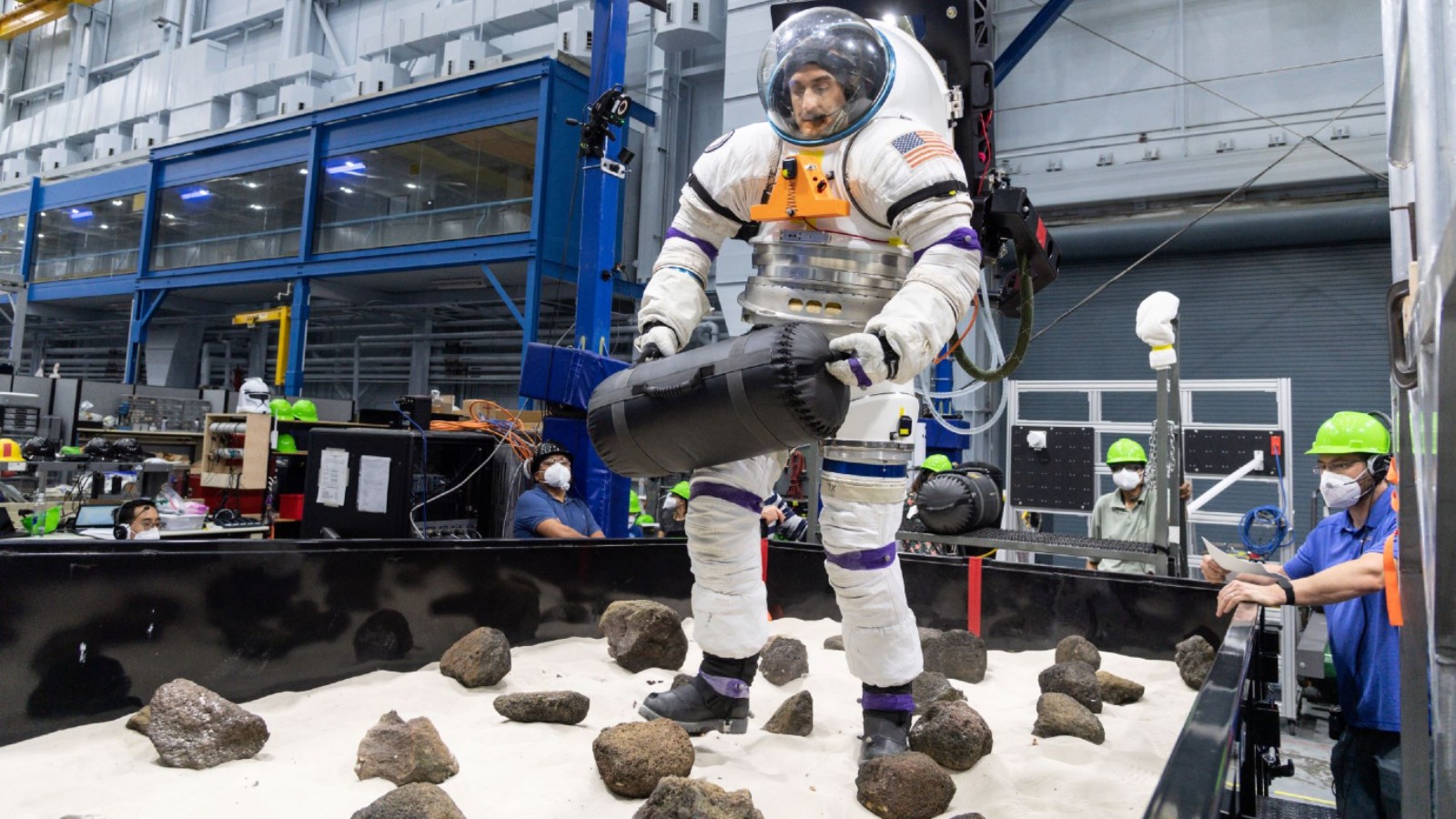 As NASA gears up for the next age of crewed space exploration, scientists are testing how well astronauts will be able to perform mission-critical tasks immediately after landing.

These challenges include debarking from a space capsule, walking in a spacesuit and even setting up life-support devices.

While there is already a focus on supporting the bodies of astronauts from the effects of space travel after they land on Earth, these tests are different, focusing on a landing on another world like Mars or the moon.

The team from NASA’s Human Physiology, Performance, Protection and Operations Laboratory and its Neurosciences Laboratory devised an obstacle course and a mock spacecraft to determine how soon after touching down astronauts can perform mission-critical tasks.

Related: How living on Mars could challenge colonists (infographic)

The testing should help make sure that astronauts traveling to the moon and even Mars are able to respond quickly and act without a great deal of information from Earth, NASA officials said.

“Through Artemis, NASA will soon send the first woman, the first person of color, and other crew members to the moon’s surface. And after that, our eyes will be on Mars,”  Jason Norcross, a scientist at NASA’s Johnson Space Center in Houston who studies human performance, said in a statement. “So we need to know: Right after astronauts land on a planetary surface, what can they physically do? How long after landing should they wait to perform certain tasks?”

NASA scientist Jason Norcross climbs a ladder within a framework of lightweight metal tubing designed to test how well an astronaut who has just returned to Earth can climb out of a capsule. (Image credit: NASA)

“This is exactly what we need for the next steps in planetary exploration,” James A. Pawelczyk, a former NASA astronaut and now researcher at Penn State University,  told Space.com.

“It’s asking ourselves more of a fitness-for-duty question. When we land on another planetary body, be it the moon or Mars, when will we be fit for duty to conduct operations on that planetary body? Will it be immediately? Will it take a few days to adapt and develop our ‘Mars legs?'”

Tackling the obstacle course were astronauts from NASA’s SpaceX Crew-2 and Crew-3 missions, who were asked to perform two sets of tasks before deploying to the International Space Station (ISS) and then do them again straight after their return to Earth. (Crew-2 is already back on their home planet; Crew-3 is expected to return from the ISS next week.)

During the tasks, the volunteers provide feedback to the scientists monitoring them, and then upon completion fill out a survey about the exertion they experienced. The challenges are recorded to help researchers pinpoint the tasks that caused the astronauts the most difficulty.

The first exercise involves emerging from a mock-up landing capsule that is made from lightweight metal tubing and fits in a backpack. This task requires the astronaut to stand up and navigate the mock capsule’s boundaries to release a ladder from the capsule’s top.

A researcher evaluates the MS1 suit in Iceland to inform development of an Artemis generation MS2 moon and Mars analog spacesuit. The MS1 was designed by the Rhode Island School of Design with input from NASA and its Johnson Space Center. (Image credit: Iceland Space Agency)

Securing this, the volunteer collects a survival pack, grabs the ladder, and ascends through a hatch at the capsule’s top, passing the pack to a researcher standing nearby. To end the test, the astronaut must descend the ladder, walk about 25 feet (7.6 meters) and then return to the starting point.

Immediately after returning to Earth from the ISS, in an airport near the Crew Dragon capsule landing site, the astronauts are asked to perform this disembarking task again.

Norcross explained that the test involves posture changes like head-turning and lying down, which he said are some of the hardest things for a crew to do immediately after landing.

“We’ve never assessed astronauts doing this particular task at this particular time before,” Norcross said. “In the preflight test, an astronaut can stand up, climb the ladder and walk easily. A couple of minutes and they’re done with this whole task.

“But post-flight, we expect that will be completely different. Astronauts may have to stop, regain their balance, catch their breath, take breaks and maybe even take a moment to be sick. It could be a struggle.”

The second task involves walking on a simulated planetary surface while wearing a spacesuit and performing several challenges. The astronauts will don the suit using NASA’s Active Response Gravity Offload System (ARGOS)  —  a machine that hoists the suit and pressurizes, enabling the experience of reduced gravity. For these tasks, ARGOS will simulate the gravity of Mars.

A closeup of the Artemis 1 Orion capsule during the mission’s rollback from the launch pad to the Vehicle Assembly Building at NASA’s Kennedy Space Center on April 25-26, 2022. (Image credit: Josh Dinner/Space.com)

During this test, the volunteers will connect tubing representing supply lines to a life-support module and repeatedly move bulky 30-pound (14 kilograms) objects from one end of a boulder field to the other.

“It’s been part of astronaut training for decades to look at crewmembers’ ability to egress — remove themselves from a space vehicle in some emergency contingency,” said Pawelczyk, who flew on NASA’s STS-90 space shuttle mission in 1998. “But that’s an emergency situation, and it’s on Earth.

“The task now when we move into planetary exploration is, we will have to exit this vehicle without assistance. And we’ll have to do it in a gravitational field that is different than our own.”

NASA stated that future tests will include more participants, more complex and longer tasks and simulations that are programmed for the moon’s gravity.

The space agency hopes that the tests will help planners design future mission activities, emergency protocols, spacesuits and even space capsules. The ultimate aim of this will be to minimize difficult operations during the first days after landing on the moon or Mars.

“We don’t know the exact configuration of a Mars vehicle and suit at this point. So the exact task that will be required of those astronauts is unknown. So, in terms of the fidelity of the simulation — that we’ll need to improve once we have a better understanding of what those will be,” said Pawelczyk. “Along with that will come finer tasks, tasks that require more dexterity.

“This is a great first step, but it’s one step among many to come.”