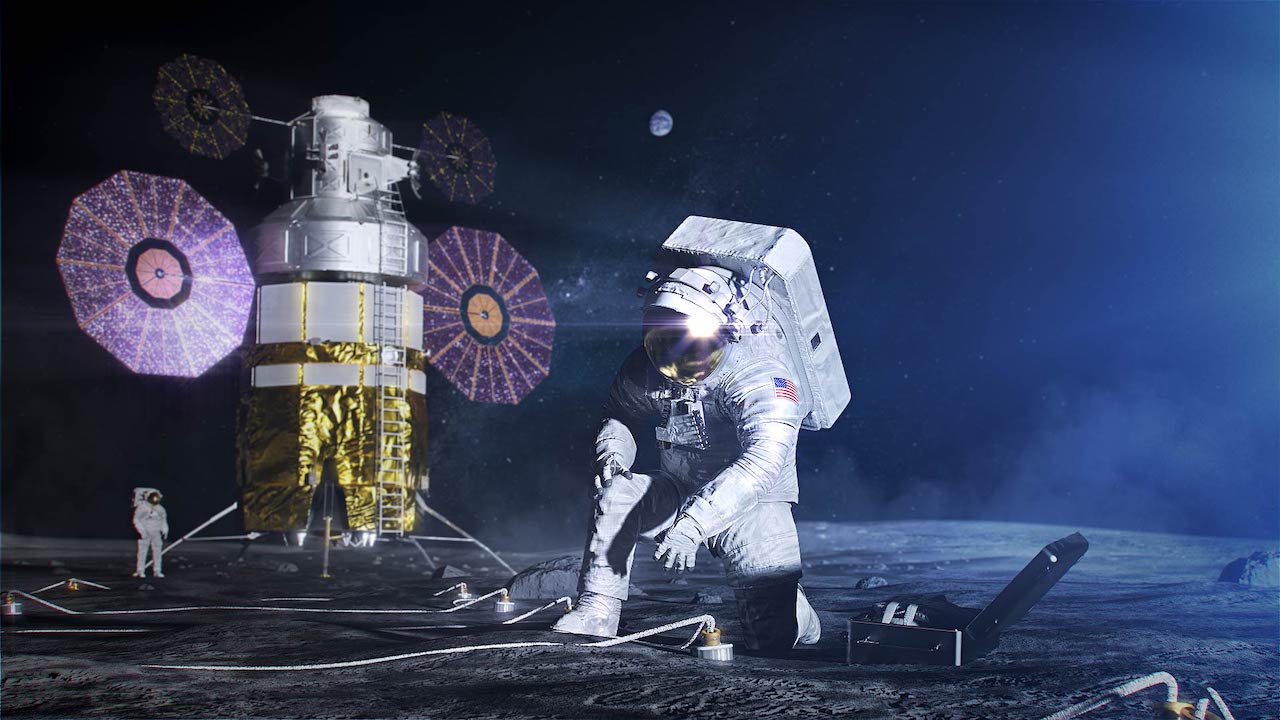 Earth’s moon is far from being a “been there, done that” world, notwithstanding a dozen Apollo short-stay visitors between 1969 and 1972.

Today, our celestial neighbor could serve as homeland for a bevy of scientific and commercial interests, from cranking out made-on-the-moon oxygen and fuels to installing antennas that scan the heavens for signs of other technological civilizations. Lunar research can even surrender basic clues about the formation of our solar system, and Earth itself.

NASA’s Artemis program to “reboot” the moon — or at least human activity there — will kick-start by landing the first woman and first person of color on the moon at a lunar south polar region no earlier than 2025. The objective is to utilize innovative technologies so that Artemis moonwalkers can explore more of the lunar surface than ever before and forge the first long-term presence on the moon.

Related: Where will NASA set up its moon base?

However, a 21st-century human return to that world to perform sustained or perhaps even permanent moon operations will not be trouble-free.

In many ways, NASA’s forward-looking vision is caught between a moon rock and a hard place, having to first develop the technologies required to give crews the wherewithal for longer and more sustainable operations on the lunar surface.

What does ‘sustainable’ mean?

NASA is getting its lunar act together by first mustering up what’s needed early for human exploration of the moon via the Artemis program. The agency will later attempt to harness the technologies and skills necessary for a sustainable, “live off the land” approach for a lunar base.

Oddly, the meaning of the term “sustainable” seems to be up for grabs. For instance, the April release of the U.S. National Academies Planetary Science and Astrobiology Decadal Survey 2023-2032 noted that NASA has used the word to describe only one goal (opens in new tab) for human lunar exploration under the auspices of Artemis.

As “sustainable” has not yet explicitly been defined in this context, the report states, a working definition was crafted to mean that there are “widely accepted reasons to continue human lunar exploration that justify the continued investment, commitment, and risk beyond a few missions.”

Illustration of NASA astronauts on the lunar south pole carrying out early work to establish an Artemis Base Camp.  (Image credit: NASA)

That said, it’s always a good move to ask advice from a person who has actually explored the moon.

According to Jack Schmitt, an Apollo 17 moonwalker, sustainability in terms of a future moon settlement has less to do with finding useful resources on the lunar surface and more to do with lowering the costs of launching crew and equipment. “The geological understanding of lunar resources and the technological foundations for sustained settlement of the moon are either in-hand or well understood,” Schmitt told Space.com

“The primary remaining challenge consists of having a reliable heavy-lift booster in the class of the Saturn V or larger that will put both economical cost and achievable risk management within reach of private or national entities,” Schmitt said.

To tackle the key challenges of future moon settlements that need addressing, a Lunar Surface Innovation Consortium (opens in new tab) is being hosted by the Johns Hopkins Applied Physics Laboratory (APL) in Laurel, Maryland this fall. It is a work in progress and an ongoing endeavor that functions in collaboration with NASA’s Space Technology Mission Directorate.

This APL-led consortium is digging deep into road-mapping ways to put humankind back on the moon, but in a sustained way.

The consortium consists of teams of individuals from various institutions including technology startups, space contractors and various academic and government organizations. This consortium and its subgroups are delving into a set of explicit focus group areas:

Making use of the moon’s resources, also known as in-situ resource utilization (ISRU) Establishing sustainable power during lunar day/night cycles; more to the point, APL’s focus group wants to enable “the right power in the right place at the right time” Building machinery and electronics that work in extreme environments, like super-cold permanently shadowed regions that may be loaded with extractable water iceCarrying out surface excavation, manufacturing and construction dutiesIdentifying critical technology gaps that pertain to robotic access, navigation, and exploration of the lunar surface and subsurface, especially previously inaccessible regions and assessing the readiness of systems and components Dealing with and mitigating lunar dust. Focus on the future

Ben Bussey is an APL planetary scientist who is leading the team supporting the NASA Space Technology Mission Directorate’s Lunar Surface Innovation Initiative. “Our job is a systems integration role,” Bussey told Space.com “What capabilities does NASA need for a sustained human presence on the moon? And how do you make sure that these are the most efficient and best technologies being developed?”

Bussey emphasized that NASA is working with a number of American companies to deliver science and technology payloads to the moon’s surface through its Commercial Lunar Payload Services (CLPS) initiative.

“It’s all about rapid technology development,” Bussey said. “With the help of CLPS, every lunar opportunity is precious. We’re essentially an independent evaluator about getting key technologies onto the lunar surface. The idea is that we provide to the government neutral advice and guidance, and that includes community liaison.”

NASA’s Commercial Lunar Payload Services (CLPS) initiative will send science experiments and technology demonstrations, ranging from chemistry to communications, to the surface of the moon under the Artemis program. Shown here is the Peregrine robotic lander, which is built by Pittsburgh-based company Astrobotic. (Image credit: Astrobiotic)

Taking a futuristic look at an Artemis Base Camp, Bussey likens it to McMurdo Station, the largest complex in Antarctica. McMurdo was established in December 1955 and is the logistics hub of the U.S. Antarctic Program run under the National Science Foundation. Research in multiple fields is performed at and near McMurdo Station, including astrophysics, geospace sciences and atmospheric sciences.

“The infrastructure associated with McMurdo enables scientific exploration for the entire Antarctic plateau … something that would happen a lot less if each individual expedition had to fly everything in and out of New Zealand or South America. Similarly, I hope the lunar base camp will allow exploration of the entire moon,” Bussey added.

Over the last two years, the Lunar Surface Innovation Consortium has grown to over 500 organizations, according to its director, APL’s Rachel Klima. “There’s a lot of enthusiasm for wanting to build an economy that centers around having a sustained presence on the moon,” Klima said.

The customer for the moon is presently the U.S. government, Klima noted. But as NASA’s CLPS initiative grows and other private industry members start considering going back and forth to the moon on their own, the customer base should grow, she said.

Klima says that APL is also engaged with NASA in supporting a Lunar Surface Innovation Initiative simulant project. Lunar samples brought to Earth during the Apollo program have a very limited availability for use in testing technologies, hardware and systems.

Matching the appropriate simulated lunar materials for testing new technologies here on Earth prior to shipping them off to the moon is important, Klima says. These include mineral/chemical simulants for appraising equipment that, for example, can produce oxygen from the moon’s topside regolith, and also mechanical simulants to judge mobility, excavation and construction ideas. Both lower and higher fidelities of simulated lunar materials are indispensable, she said, in judging technology readiness levels of moon-bound equipment.

Especially when getting into 3D printing of regolith or the sintering and extruding of simulated materials, knowing the melting temperature by well-matched, fine-tuned simulants is hugely important, Klima pointed out. Just using any off-the-shelf simulant to study how equipment and processes react on the moon is not prudent, she said.

“There’s a lot of effort to try and understand what technology can be adequately tested on Earth in facilities that exist or others that could reasonably be developed,” said Klima. In that testing queue are aircraft capable of simulating the moon’s one-sixth gravity for brief stints during parabolic, roller-coaster-like jaunts, making it feasible to flight-test equipment intended for moon use.

Kirby Runyon is a planetary geologist at APL. He’s also a co-facilitator for the in-situ resource utilization, or ISRU, focus group. He’s hungry to get technologies mature enough to trial-run them on the lunar surface.

“The early pioneers in American history used ISRU when they took water out of a stream or built houses out of local timber. That’s ISRU. We’re just looking to do the lunar version of that,” Runyon told Space.com, “and if you want to have a sustained human presence on the moon, it’s difficult to imagine how you would do that without ISRU. They really go hand-in-glove.”

While he admits that water ice on the moon draws a lot of attention, that’s not the number one resource at the lunar south pole — that would be sunlight. There are hill tops in that south pole region that are nearly continuously bathed in sunlight for around 250 days out of the year, a situation ideal for the emplacement of a cluster of solar panels for power generation.

A visualization of Shackleton crater. Do significant amounts of water ice lurk at the bottom of this sun-shy lunar feature? The near (Earth-facing) side of the moon is to the right. Color coded and contoured elevation illuminates the crater floor.  (Image credit: Ernie Wright/NASA Scientific Visualization Studio)

As for lunar water ice, you can’t design mining gear very straightforwardly if you don’t know the distribution and quality of that water ice.

“How deep is it? Is it in solid blocks or tiny ice grains? You need to know the status of that ice before you can confidently make technology to go mine it,” Runyon said. “That’s a piece of the puzzle, a tall tent pole.”

Unfortunately, there’s limited data that dives into clarifying that water ice riddle, and this is the exact type of knowledge gap that needs to be closed, experts say.

To do so, it would be necessary to send lunar-orbiting spacecraft with special instruments that can sense the whereabouts, quantities and conditions of water ice on the moon. They’ll need to fly over territory at low altitude in barnstorming fashion, Runyon suggested, followed by robotic rovers to localize that water ice down to football-field-sized grids.

“Then you can confidently design the technology for extracting that water ice,” he added. “And we need to do that as soon as possible.”

Runyon said that the moon is also rich in oxygen that’s ripe for extraction. It will be feasible in the very near future to land a solar-powered molten regolith electrolysis oxygen production plant on the moon, he said. The European Space Agency (ESA) is already testing a prototype (opens in new tab) of such a device.

Just three commercial solar panels could churn out enough electricity to power that plant to yield 10 tons (10,000 kilograms) of oxygen in a year, Runyon said. “I would consider oxygen to be a sustainable, and for all intents and purposes, an infinite resource on the moon — and ditto with a lot of metals.”

APL’s experts are weighing the advantages of solar panels, batteries, regenerative fuel cells, beamed power and also nuclear fission reactors, Runyon said. Tapping into those technologies will depend on where one is on the moon and how long one needs to be able to survive without sunlight.

Over the next few years, there will be a multi-nation flotilla of robotic moon orbiters, landers and rovers that will signal a revitalization of lunar investigation.

But just how this new surge of discovery will build upon the historical legacy of Apollo, transforming the moon to being a long-term, footprint-friendly place remains to be seen.

Leonard David is author of the book “Moon Rush: The New Space Race,” published by National Geographic in May 2019. A longtime writer for Space.com, David has been reporting on the space industry for more than five decades. Follow us on Twitter @Spacedotcom (opens in new tab) or on Facebook (opens in new tab).