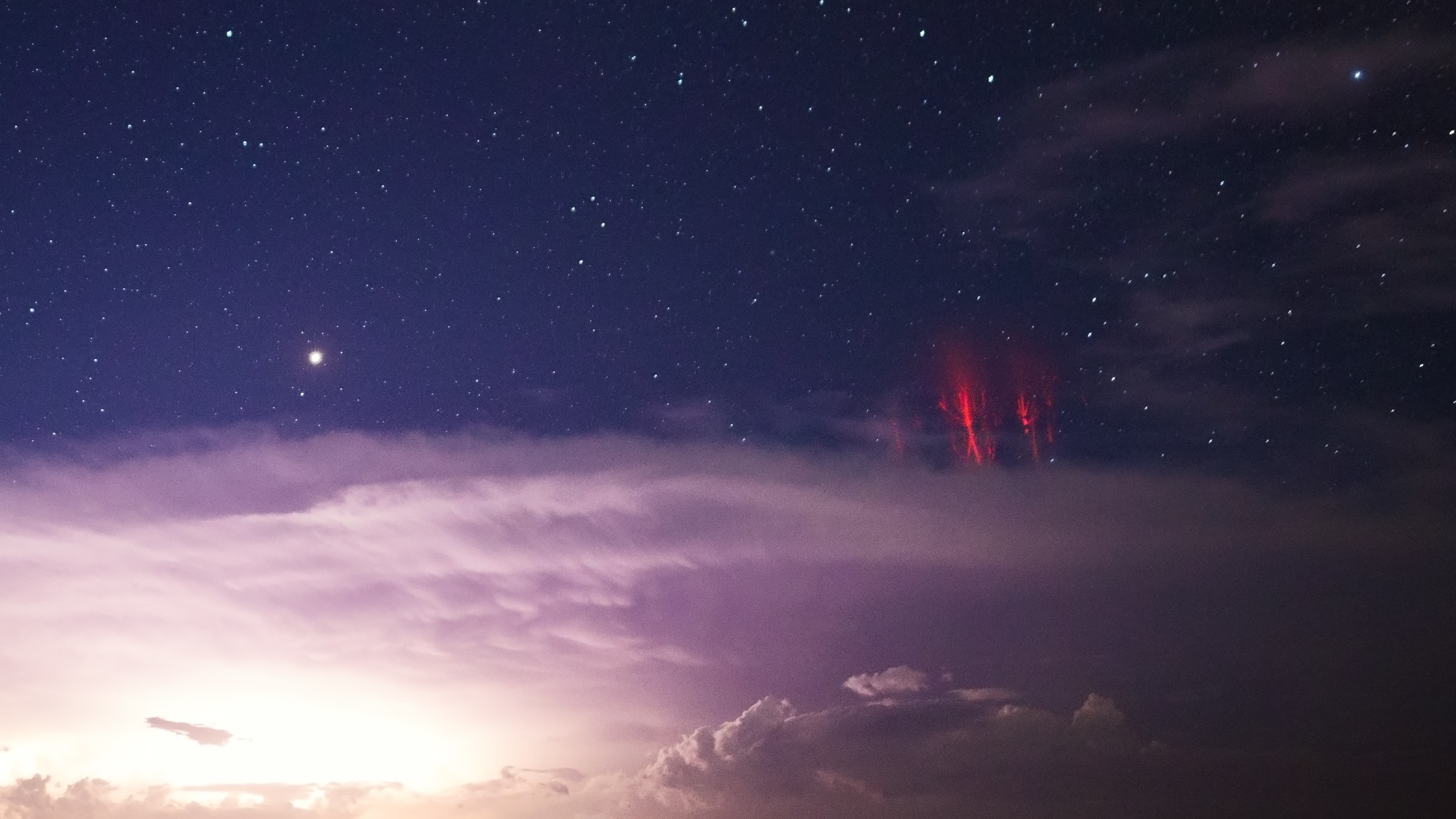 Red lightning, also known as a “sprite”, is an intriguing weather phenomenon associated with certain very intense thunderstorms. While an ordinary lightning flash extends downward from the clouds to the ground, a sprite shoots way up into the upper reaches of the atmosphere.

However, red lightning it only lasts for a millisecond or so, which makes it difficult to observe and study. Here’s a look at what scientists have learned so far about the phenomenon.

Related: Space weather: What is it and how is it predicted?

What are lightning sprites?

Given their elusive nature, “sprite” is an appropriate name, although this is actually an acronym that stands for: Stratospheric Perturbations Resulting from Intense Thunderstorm Electrification. Like regular lightning, red lightning is caused by a build-up of electrical charge in clouds, but in this case the excess charge is released to the ionosphere — around 50 miles (81 kilometers) up — rather than to the ground.

Sprites are usually red in colour, and can range in shape between a jellyfish and a carrot. Compared to an ordinary flash of lightning they can be huge in size, often as much as 30 miles (48 km) across.

Although it looks so striking when captured in a photograph, red lightning isn’t easy to observe from the ground, because it occurs high above the cloud layer. It can be observed more clearly from high-altitude planes, including specially instrumented research aircraft and it’s also been observed by astronauts on the International Space Station.

Red lightning isn’t the only upper-atmosphere phenomenon that can be triggered by thunderstorms. Collectively known as Transient Luminous Events, or TLEs, other examples include blue jets, which are optical ejections from the core region of a thunderstorm, and “elves” (Emission of Light and Very low frequency perturbations due to Electromagnetic pulse Sources), which are rapidly expanding disc-shaped regions of luminosity.

In common with many weather phenomena, red lightning could in principle occur on other planets that have an atmosphere, not just Earth. It’s been known, for example, that ordinary lightning is a common occurrence in Jupiter’s atmosphere ever since NASA’s Voyager 1 probe flew past the giant planet in 1979.

In the case of sprites specifically, researchers at Tel Aviv University carried out an experiment in 2011 to test whether they could occur on Jupiter, its neighbouring gas giant Saturn, and our own near-neighbour Venus.

They re-created the atmospheres of these planets in their laboratory and passed electrical discharges through them. They found that under the right conditions, sprites could form on all three planets. In the case of Jupiter, the theory was finally confirmed in 2020, when observations from NASA’s Juno spacecraft showed that both sprites and elves do indeed occur in the planet’s upper atmosphere.

The first color image of a sprite, obtained in 1994.  (Image credit: NASA/University of Alaska)

Anecdotal accounts of lightning-like phenomena occurring above thunderstorms go back to the 19th century, but it was only in the 1950s, when red lightning was observed from airliners, and tentative physical theories were described, that it entered the scientific domain.

The first photograph of a sprite was taken by accident 1989, when a team from the University of Minnesota recorded an upward flash from the cloud tops while they were testing a low-light TV camera.

Over the next few years, video recordings made by astronauts on the Space Shuttle captured several more examples, placing the phenomenon on a much firmer observational footing.