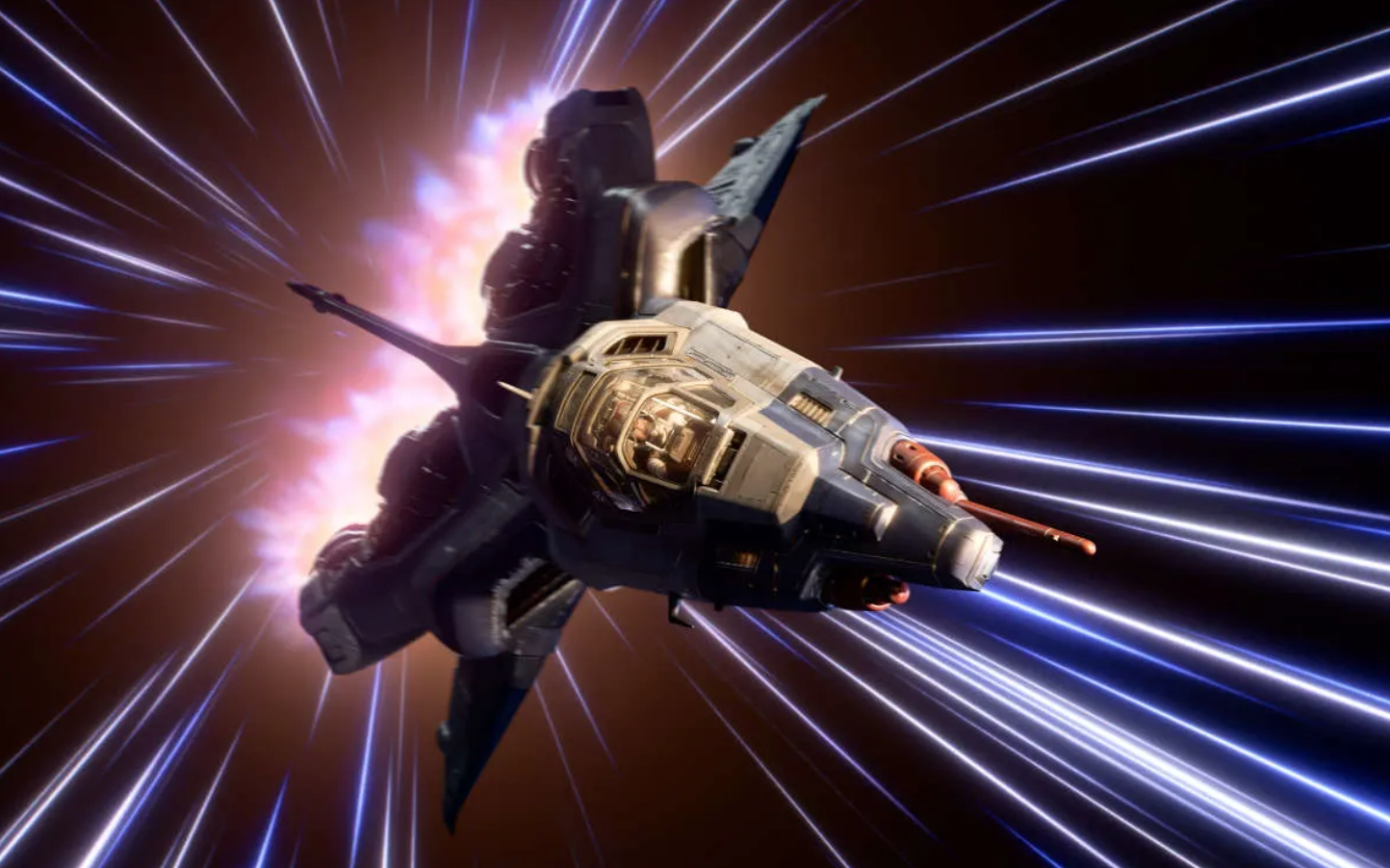 Disney/Pixar’s highly-anticipated “Lightyear” arrived in theaters this weekend, and where this prequel spin-off of the iconic “Toy Story” empire should have been an electrifying slam dunk, the event film comes across as a stiff piece of corporate entertainment that lacks heart and magic.

Pixar’s endearing “Toy Story” quadrilogy, TV specials and shorts are a beloved part of pop culture since its CGI sorcery first crossed screens in 1995, becoming the world’s first computer-animated feature film and spawning a billion-dollar franchise that families around the world have grown up with.

“Lightyear” is an ambitious time-travel adventure set outside that cinematic universe in a sense, as it depicts the actual movie that Andy saw to make him want a Buzz Lightyear action figure in the first place, a fact evidenced by the “Lightyear” movie poster tacked to his bedroom wall in the original film.

And if you didn’t know that, the introductory text will refresh your memory for you!

Related: ‘Beyond Infinity’ launches deep into Buzz Lightyear’s history on Disney Plus

There’s been much ado about the MCU’s Chris Evans taking over for Tim Allen in voicing the confident Star Command hero, but it’s all a lot of rocket exhaust as this is a different iteration of the character from the tie-in toy line that Buzz is a part of in the four “Toy Story” films. Plus, Chris Evans is much a greater box office draw than Tim Allen at this stage of the Hollywood game and Captain America’s name on the “Lightyear” poster certainly won’t hurt its appeal.

The structural problem here lies in preconceived notions of the character based on his blowhard antics in “Toy Story,” which can’t be translated to form a likable identity in this meta film-within-a-film medium apart from the franchise’s own internal logic.

Promoted as a PG-rated children’s film that’s family-friendly, the time travel and time dilation plot points will be totally lost on most kids under 10 (which made up more than half the audience for my screening) and at times the jokes fall flat with no tonal consistency or esoteric wit to be found.

“Lightyear’s” plot presents Buzz (Chris Evans) as a famous Space Ranger in Star Command as he crashes a spherical spaceship on the hostile world of Tikana Prime 4.2 million light-years from Earth. The crew of 1,500 disembarks and builds a habitable colony to survive while Buzz tries to recreate hyperspace fuel cells needed to return home via a series of experimental faster-than-light test flights.

Through the concept of time dilation, each failed flight skips ahead four years for everyone except Buzz. As he nears the threshold of hyperspace he ages far slower than the colonists whose lives are continuing at normal speed. During these temporal lapses his commander and friend, Alisha Hawthorne, (Uzo Aduba), gets married, has a child, and then a granddaughter. Over sixty years later, Buzz’s robo-cat named Sox (Peter Sohn) figures out the correct formula for fuel stabilization but now so many decades have passed that nobody wants to leave Tikana Prime.

Buzz disobeys orders of the new commanding officer and steals the XL-15 spaceplane that delivers him 22 years into the future where Emperor Zurg and his robot invasion force have now attacked the planet. The former Space Ranger must team up with Alisha Hawthorne’s grown-up granddaughter, Izzy (Keke Palmer), and her two cadet friends, Mo Morrison (Taika Waititi) and Darby Steel (Dale Soules), to stop the evil Zurg (James Brolin) and his intimidating robots to free the colony.

There’s no denying that the technical aspects of “Lightyear” are top notch, proving beyond infinity that Pixar is still the sterling standard in CGI animation and will be for decades to come. The outer space vistas, roaring rockets, alien spacecraft, and Zurg’s invasionary robots are stunning and imaginative. Ingested as pure science fiction eye candy, it’s all supremely addictive.

The Academy Award-winning Michael Giacchino (“Dune,” “The Batman”) delivers a wonderful score to add to his many Pixar soundtracks that include “The Incredibles” and “Up,” and helmer Angus MacLane (“Finding Dory”) provides solid directorial skills and propulsive pacing.

But watching nearly 100 minutes pass in this “Toy Story”-related movie, I was prone to feel some charm leaking out of its colorful sci-fi balloon. The storyline felt sadly redundant and derivative at times, pieced together from other, better flicks. For that I blame the inert screenplay by Angus MacLane, Matthew Aldrich and Jason Headley, and partially a misguided sense of Disney accountants pawning this film off as part of the “Toy Story” legacy for financial gain.

Up until the third act, when a WTF twist revolving around Zurg is revealed and the audience is left in a stupor trying to figure out by what mechanism of time and space distortion this plot choice was derived from, and bored toddlers wandered parent-less in the dark theater, this was an adequate spin-off, though stripped of its humor and trademark sophisticated Pixar gags. But this odd reveal should have been axed while still in the writers’ room, if not for pure logic’s sake, then at least to maintain the continuity between Buzz and Zurg that came in the films before it.

“Lightyear” is gorgeous to stare at but feels slightly generic in a modern world of entertainment offerings where epic science fiction and fantasy projects are now crowned kings. It’s a film that revels in its mediocrity and never fully attains creative orbit, and that’s a shame when considering how cherished the Buzz Lightyear character and all his fantastic foibles are. (Think about it, he even has his own theme park ride at Disneyland and Disney World!)

The conundrum here is what to do when a sentient toy is more interesting than the actual source character? We’ll leave that convoluted question to the wisdom of the universe to unravel.

Where we would have loved to see a film centering around the golden age of Star Command and their daring Space Rangers going through the academy and rising to galactic prominence, we’re given a “wibbly wobbly, timey wimey” narrative and deconstruction of the character that will confuse young kids and make adults pine for the goofy charisma of the old Buzz Lightyear more than ever.

Still, if you don’t think about the premise too hard and chase it down with a popcorn and frosty beverage, it just might be a suitable summer diversion for you to enjoy.

And yes, there are three fun post-credit scenes worth watching!