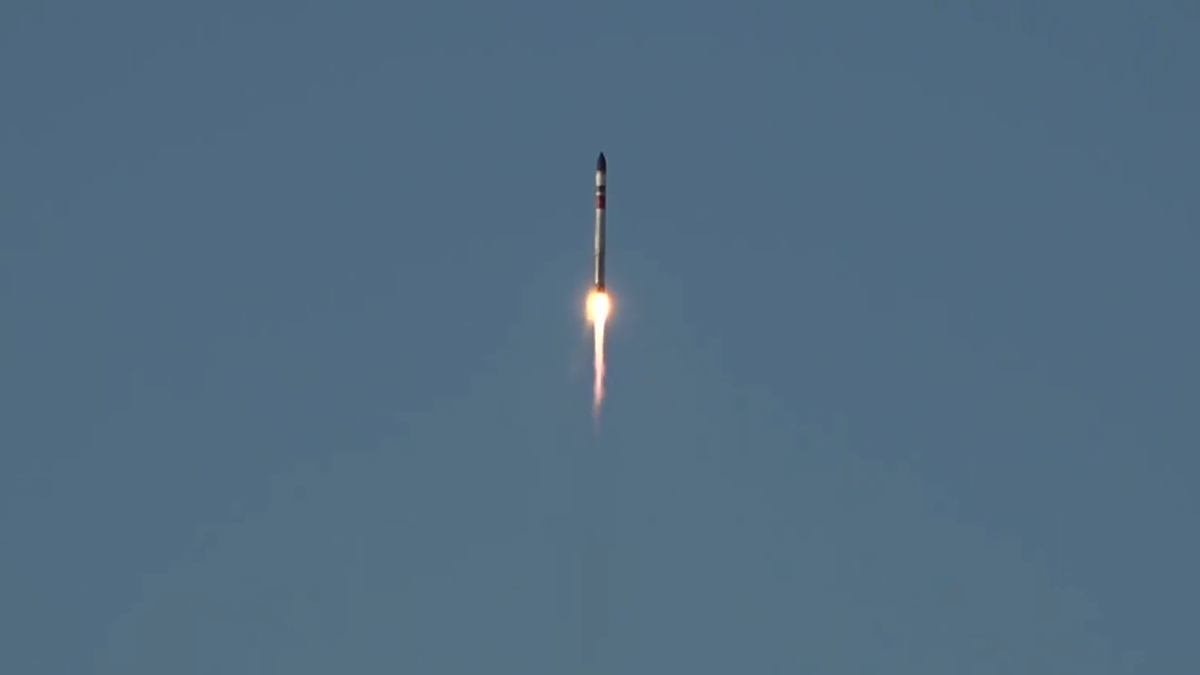 Rocket Lab launched a Swedish research satellite to orbit today (Nov. 4) but didn’t manage to snag the returning booster with a helicopter.

The mission was a success; the Electron deployed the satellite, known as MATS (“Mesospheric Airglow/Aerosol Tomography and Spectroscopy”), an hour after liftoff as planned. But Rocket Lab wasn’t able to pull off the catch alluded to in the flight’s name.

The California-based company aimed to snatch the Electron’s first stage out of the sky with a helicopter about 19 minutes after liftoff, to keep the vehicle from getting dunked in corrosive seawater and to help ease its delivery back to terra firma for analysis and eventual reuse.

The 59-foot-tall (18 meters) Electron, a small-satellite launcher with 32 missions under its belt to date, is currently a completely expendable vehicle. Recovery and reuse of the first stage would allow Rocket Lab to boost its flight rate and reduce costs, company representatives have said.

Electron is too small to perform powered vertical landings, as SpaceX’s Falcon 9 and Falcon Heavy boosters do; it doesn’t have enough fuel left over after launch for such maneuvers. So Rocket Lab decided to go with the helicopter, which grabs ahold of Electron’s parachute line with a hook as the booster descends.

Rocket Lab has made some progress toward its reusability goal. For example, it has already performed one helicopter recovery, on a mission in May of this year called “There And Back Again.” (Rocket Lab likes to give its flights playful names, as you may have noticed.)

During that May mission, the helicopter — a Sikorsky S-92 — successfully snagged the Electron’s first stage but dropped it into the drink shortly thereafter, after the newly captured load began behaving in ways the pilots had not expected.

Rocket Lab fished the rocket out of the sea and hauled it back to shore by boat. The company analyzed the flown booster, then refurbished and tested one of its nine Rutherford engines, with promising results.

“The refurbished engine passed all of the same rigorous acceptance tests we perform for every launch engine, including 200 seconds of engine fire and multiple restarts,” company representatives wrote in the press kit for “Catch Me If You Can,” which you can find here (opens in new tab). The tests showed that the engine produced full thrust and “performed to the same standard of a newly built Rutherford engine,” they added.

Still, Rocket Lab would prefer to keep its boosters out of the water. So it planned to send the Sikorsky after the falling Electron booster on “Catch Me If You Can” today — but things didn’t work out.

“We are not bringing Electron home dry on this mission due to some telemetry loss from the rocket’s first stage during reentry,” Murielle Baker, Rocket Lab’s communications manager, said during a webcast of today’s launch.

“As standard procedure for safety, we pull the helicopter out of the recovery zone if this happens, so we couldn’t attempt a catch today,” she added. “But this is what test programs are all about: pushing hardware and systems to their limit and iterating.”

The Electron performed a soft splashdown in the Pacific Ocean, and Rocket Lab plans to recover it by boat, Baker said.

The failure of the helicopter catch should not color the entire mission, of course. It was a sidelight, and “Catch Me If You Can” succeeded in its primary objective, delivering the MATS spacecraft to its designated orbit.

MATS “is the basis for the SNSA’s science mission to investigate atmospheric waves and better understand how the upper layer of Earth’s atmosphere interacts with wind and weather patterns closer to the ground,” Rocket Lab wrote in the mission press kit.

MATS was originally supposed to launch atop a Russian rocket, but the SNSA and its main contractor for the satellite, OHB Sweden AB, nixed that agreement (opens in new tab) after the Russian invasion of Ukraine and rebooked on an Electron.

Editor’s note: This story was updated at 3:15 p.m. EDT on Nov. 4 with news of successful launch and satellite deployment, and the lack of a helicopter booster catch. It was also corrected at 7:45 p.m. EDT to clarify that the helicopter did not drop the Electron accidentally during a May attempt; the drop was done intentionally, after the pilots witnessed behavior from the captured load that they didn’t expect.

« Traders expect 200% upside from MATIC, but does Polygon network data support that? » Web3 Foundation makes bold claim to SEC: ‘DOT is not a security. It is merely software’