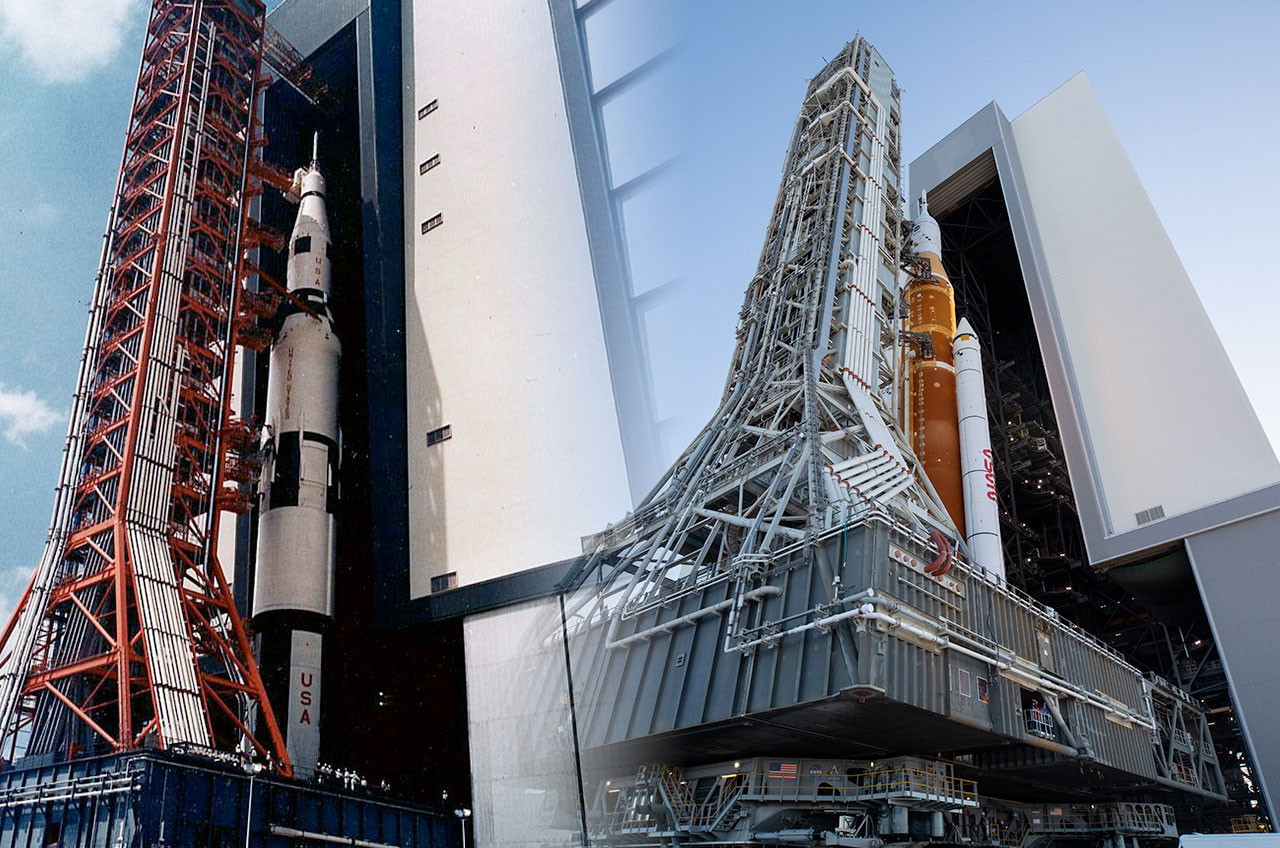 “It was a sight unseen before by mankind.”

That was how NASA described the first rollout of a Saturn V rocket 56 years ago. Were it still in print today, the space agency’s “Spaceport News” might use that lede again — this time for the first Space Launch System (SLS) booster following in the tracks of its Apollo predecessor.

On Thursday evening (March 17), the Artemis 1 SLS emerged from the same Vehicle Assembly Building (VAB) at NASA’s Kennedy Space Center in Florida that the first Saturn V exited on May 25, 1966. Standing close in size and riding atop crawler transporters built for the Apollo program, both the SLS and earlier Saturn V each represented a new effort to send humans to the moon, though neither of the inaugural vehicles were built to achieve that goal.

The first Saturn V, designated 500-F, was a mockup assembled to test ground facilities. Its first stage had only one mock engine out of the five that would power the later moon-bound rockets. The vehicle was able to be loaded with propellants, however, and that fueling was demonstrated as 500-F stood on Pad 39A.

Similarly, the Artemis 1 SLS was making the overnight journey to Pad 39B for a “wet” dress rehearsal, including being fueled and put through a full countdown (minus the liftoff). Unlike 500-F, though, the first SLS will not be retired afterward. It will return to the VAB to be studied and serviced so it can launch the Artemis 1 mission, sending an uncrewed Orion spacecraft on a three-week trip around the moon and back.

The Artemis 1 Space Launch System (SLS) is seen atop an Apollo-era crawler transporter and new mobile launcher on its first rollout to the launchpad on March 17, 2022. (Image credit: collectSPACE.com)

“Every generation has its moment. This is going to be an incredible moment for this generation,” Tom Whitmeyer, NASA’s associate administrator for exploration systems development, said in a call with reporters. “In this business, you get used to a certain size and scale. I think we were pretty well tuned to that during the shuttle program. But every time I see this vehicle, it just catches your breath.”

Completed early Friday morning (March 18), the first SLS rollout came 11 years, 5 months and 6 days since President Barack Obama signed the NASA Authorization Act of 2010, which directed the agency to build the heavy-lift rocket. By comparison, the first Saturn V was rolled out five years to the day after President John F. Kennedy challenged the nation to “commit itself to achieving the goal, before this decade is out, of landing a man on the moon and returning him safely to Earth.”

Here is a look at how the first rollouts of the Apollo Saturn V and Artemis Space Launch System (SLS) rockets further compared.

NASA’s Artemis 1 Space Launch System (SLS) is moved for the first time to the launch pad after departing the Vehicle Assembly Building (VAB, at left) at the Kennedy Space Center in Florida on Thursday, March 17, 2022. (Image credit: collectSPACE.com)